Trigger. That was the name of the Castro bar where I attended my first ever lesbian party. I was 18 and the only two gay people that I knew in the world were closeted. I was in love with one of them, but they were in love with each other. Naturally.

As a freshman, I would overhear the seniors in my upper division queer theory class talk about the queer bars they were going to on the weekends. I sat anxiously in my seat, eavesdropping and hoping that one day they would ask me to join.

I wanted so badly for these older queers to accept me as one of them. The invitation I was waiting for finally came on the third week of class. I convinced my only friend with a fake ID to join. It wasn’t hard to convince my friend to come along — even straight people knew that the Castro was the best place to get drunk on a weekday.

My friend with the fake ID, like everyone else, thought I was straight. My tumblr page filled with vintage photos of Winona Ryder and Angelina Jolie and the fact that I was in a Queer Theory class wasn’t a dead giveaway for them, nor for me, at the time.

Before that night, my forays into the Castro were by accident.  I used to wait on the corner of Market and Castro in front of the old Diesel store three times a week to transfer onto a bus that would take me to work after school.

Bored out of my mind at the stop, I would read the informational billboards offering drug counseling and free HIV tests featuring images of people with hairless, glistening chests. The artfully curated ads were everywhere, but I doubted that the group that I so badly wanted to be a part of had “real” drug problems. They probably just like to have a good time, I told myself.

My first real night out in the Castro took off quickly. After pounding dollar drinks at The Edge, a corner street dive that played classic ’90s movies to its mostly burly, bearded clientele, and then two-for-one wells at Q Bar, a strobe-heavy bar that is barely wider than a hallway, we walked over to Trigger.

Girl parties aren’t known for drink specials, but the rest of Castro is full of heavy pours. So by the time we reached our final destination, the fake ID I gripped in my hand, like everything else, blurred in front of me. I didn’t need to worry because the bouncer didn’t closely examine to check if it was fake. He was too distracted by a group of snapback-clad girls pulling at his shoulder sleeve, reminding him that he has to let them in because he let them in last time. They don’t have IDs, and Trigger would eventually shut down for letting in too many underage queers like the snapback lesbians and me.

Once I made it past the doorman, a bitter butch in a too-tight flannel stamped the inside of my wrist, and I zoomed in without waiting for my friend to make it inside. Everything was exactly how I dreamed it would be — bartenders with asymmetrical haircuts and lip piercings, go-go dancers gyrating on top of the bar, neon colored shots in lab-inspired tube glasses, and dykes everywhere.

“It’s just like The L Word,” I muttered to myself. My straight friend asks me to repeat what I just said, but I couldn’t give away that I was an avid watcher of the most lesbian TV show in history. Plus, I was already at the bar ordering a Dos Equis because that’s what Shane drinks. The rest of the night was a blur.

Gay culture is deeply interconnected with drugs and alcohol. Blame it on the fact that most of us are reliving our adolescent years in our twenties, or that we need more sedation than your average hetero to put up with the daily attack on our human rights — either way, there’s always a good reason to order another round of shots.

Historically, the only places that queer people could be out were undisclosed bars, clubs, and parties. Queer people couldn’t fly their flags high back then, so underground venues and exclusive parties served as the primary place to meet other queers. Although we have more freedom now as queer people than our elders did, the desire to escape into a safe space still exists. Queer bars are spaces where we can embrace every part of ourselves without fear being perceived as “different.”

If we want to be around other queer people it often feels like the only option is to go to a bar, where we tell ourselves we will only have one drink. But, it’s hardly ever one. In my experience, gay bars are fueled by alcohol in a way that their straight counterparts aren’t. The drinks are cheaper, stronger, and you can find a party on any night of the week.

As a baby dyke, I drank to calm my anxieties before entering these unknown spaces without realizing that most of my peers were doing the same. Cheap drinks in the Castro, five dollar AMF pitchers in Boystown, double margarita pints in WeHo that make the extra $1 charge for an additional shot worth it.

Gays are taught how to party. It’s not a secret. Straights know it and we own it. It’s part of our Brand™. Bachelorette parties flock to WeHo in search of a Vegas-style good time, and by the time I moved out of San Francisco, the straight-to-gay ratio on Monday night at Q Bar was pretty much even. Cishets venture into our spaces for a “wild night out” away from their norm, but for us, it’s just another Thursday.

The reason there is such a disdain for straight people with an affinity for partying at gay bars is that these spaces are sometimes the only ones queer people have. Straight people already have everything else. For queer women and non-binary folks, the battle is even steeper. Unlike gay men, we don’t have Grindr to scratch that mid-week midnight itch. Dykes have to wait for the weekly or monthly girl parties. If not, then you can hit up Tinder, but that usually entails spending money to meet up with someone for a drink. Meeting other gays sans alcohol has been not an easy task for me.

I still remember the morning after my Tuesday night at Trigger, when I stumbled into class with a swollen jaw, burns on my fingers and very little recollection of what had happened the night before. I wasn’t a stranger to blackouts, but this night was different. My older classmates laughed and told me that I had probably been roofied at Q Bar.

“Everyone gets roofied at Q Bar,” they told me. I’d repeat that line every time I told the story with a smile or a laugh. It felt like a rite of passage. I finally belonged.

Gay adventures in San Francisco continued for me throughout college and those nights consisted of pouring half bottles of tequila into half emptied sprite bottles, hopping on the back of the train and downing the drink before the operator announced “Castro.” On those nights, I never saw the billboards that lined the MUNI station walls warning against addiction, inviting gays to focus groups that might help them. It wouldn’t have made a difference. Those billboards were talking about meth and ketamine binges. It wasn’t for me. I was a fun gay.

In the past eight years, I spent only two handfuls of weekends sober — eight, to be exact. I wish I could tell you that I had a moment of enlightenment that led me to sobriety, but the reality is that my body just gave out — twice in two years. Last year, I spent two weeks in a hospital being pumped full of blood and was released with instructions to stop drinking for eight weeks and “drink moderately” after then, if at all. It was easy at first. But those eight weeks ended up being more like six weeks and before long, I was back at it. I avoided doctor visits, ignored symptoms until it was too much to ignore.

I rolled my eyes at the nurse who said I had a drinking problem. “I drink the least out of all the people I know. I’m just cursed with a weak stomach lining. Faulty genes.” It wasn’t until a couple of weeks ago, that while talking to some friends, I realized that I had drank despite all the warnings my body gave me. Just because I didn’t drink as much as I did before, didn’t make my problem any less severe. At first, I pretended to be stoked about my sobriety: “I wanted to quit anyway.” But, on a Saturday night, the only thing standing between me and a well whiskey on the rocks is the stack of hospital bracelets sitting in a box in my room.

Seven years later and three hundred miles south, I’m now living in Los Angeles. I have been sober for a month. The queer bars with their shiny disco balls and sweaty, gyrating bodies aren’t as fun as I remembered. Sobriety is dulling at times, and the stark realization that so many of the things you enjoyed, you only did under the influence is lonely.

But the incessant hangover state is gone, and my days are longer. I get more stuff done. I look for experiences instead of drink specials.  Most of my queer peers still drink. Some of them don’t have the same issues with self-control that I do, none of them have a stupid stomach lining with a propensity for bleeding.

I’m starting to see a shift. More and more, young queers are opting for sobriety, taking breaks from drinking, tiring of the monotonous weekend festivities. Maybe we’re getting older, maybe the hangovers are getting too gnarly or I don’t know — maybe this is growing up. 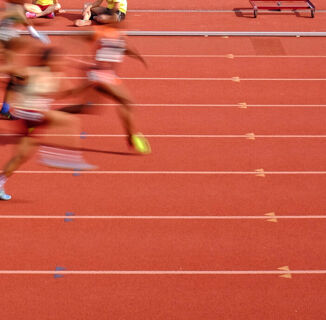