I’m a bisexual woman. My trans man friend told me I could not identify as queer. He said to be queer is to be political and I am “too straight.” He said I have slept with too many men, my Instagram seems straight, and I don’t have enough gay friends.

I don’t agree with him on any of these points.

I don’t identify as queer, in part because I’m afraid of this kind of biphobic reaction. I am aware of my cis, gender-conforming privilege, but I strongly feel it’s not anyone’s place to tell me how to identify. I feel as though he, as a trans man, should know that a person is not always what they appear to be from the outside.

We stopped speaking to each other for a while after this conversation. He has since apologized and has invited me and my female partner to his upcoming wedding.

Queer Abby, should I forgive this person?

As Queer as I Want to Be 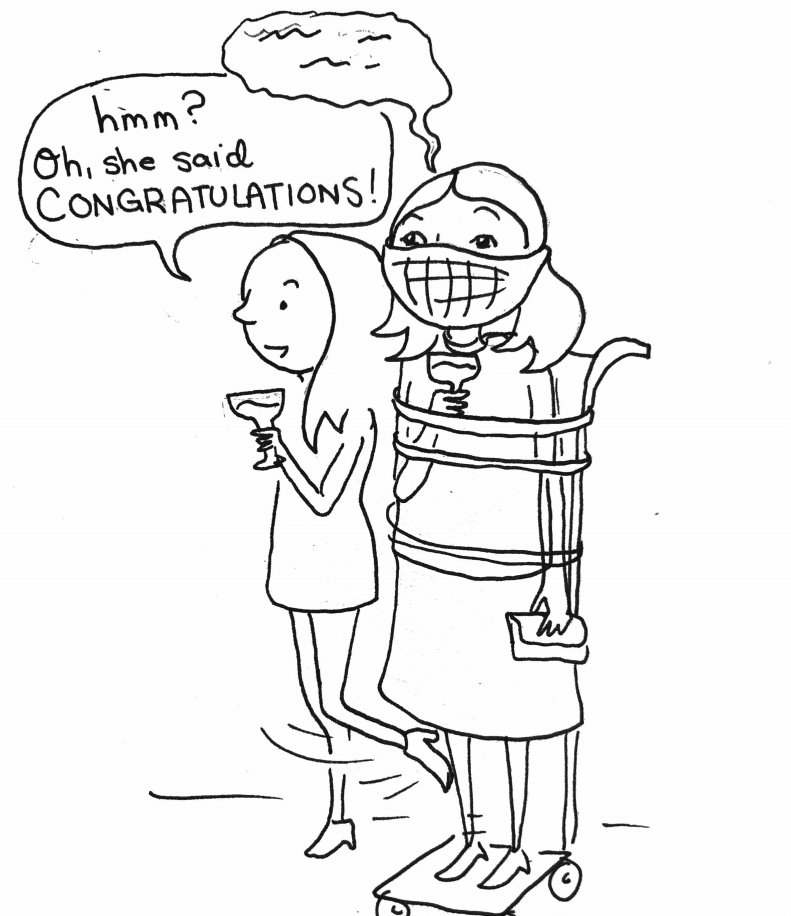 1. You can identify as anything you want.

2. It’s never too late to come out. You don’t need to have been a practicing queer/bi/homo since birth in order to have a place in the queer world now

3. You should absolutely forgive your friend and celebrate his wedding.

4. I want to scrub your mouth out with soap for saying that thing about trans people not being what they appear from the outside. Please never say that again. It’s a false equivalent (being a gender-conforming bisexual is in no way the same as living as a trans person) and rude at best, transphobic at worst. If you plan to argue this point at the wedding, then I think the only way you can attend is by being wheeled in on a dolly, a la Hannibal Lecter, with a face cage, and by making a deal with your date that if you start talking about this point to any of the trans groom’s friends or family, she will start loudly humming “Send In The Clowns” to drown out your point. That’s my true advice!

Queer is currently being used as an umbrella term that can allow fluidity and can encompass a broad range of loves, without being attached to a binary. I think broadening our language to be more inclusive can only be a positive thing.

However, I’d like to digress and offer a perspective on what (I believe) your friend was getting at.

Currently, the word “queer” is undergoing a wave of gentrification. It is a long-time slur that was reclaimed and embraced by radical activists. “Queer” is currently getting shined up and adopted by the mainstream as a friendly, safe way to explore your sexuality.

Let’s think of “queer” as a neighborhood.

One way to know for sure if you’re a gentrifier is if you are moving into a neighborhood based not on how it is/ has been (and how it is serving the current residents) today, but based on its potential to change for your own safety and enjoyment.

Another way to certify your place as a gentrifier is to move in and not fraternize with or listen to the people who already live there. To ignore the long-time residents of a place and their desires (if they don’t align with your own), but to welcome in newcomers & coffee-shops/stores of whimsy that serve you, young Columbus.

You don’t, as a newcomer, get to take up another place or culture’s moniker or costume without listening to the current inhabitants. Even if you mean well and you really, really want to! That would be a colonizer stance, and certainly, we can do better.

Queer did not start out as a safe and comfortable word, and I think if people are looking to adopt this word for themselves, they should know & respect the history of the place they’re moving into.

Endeavoring to learn your history is a way of showing respect to the people who paved the way for you to come here and come out safely.

If you find your queer value represented or reflected back to you in society, you have their hard work to thank.

So let’s get into it!

“Queer” was a slanderous term (famously coined by John Sholto Douglas, Marquess of Queensbury, who referred to Oscar Wilde as a “Snob Queer” in 1894 after he discovered Wilde was having sex with his son), used to besmirch homos before it was re-appropriated by radical activists in the late ’80s as a way to set themselves apart from gay culture. This was documented and solidified in 1990 by Queer Nation through a pamphlet called Queers Read This:

“When a lot of lesbians and gay men wake up in the morning we feel angry and disgusted, not gay. So we’ve chosen to call ourselves queer. Using ‘queer’ is a way of reminding us how we are perceived by the rest of the world. It’s a way of telling ourselves we don’t have to be witty and charming people who keep our lives discreet and marginalised; we use queer as gay men loving lesbians and lesbians loving being queer. Queer, unlike GAY, doesn’t mean MALE.”

In the height of the AIDS epidemic, when a generation of gay and trans artists and thinkers were vilified, plagued, eradicated and ignored by their government, the term Queer was reclaimed, and embraced by people America was treating as trash. Queer was synonymous with being radical, intersectional, anti-assimilation, and with a dedicated push against the binary and cultural norms.

Since you’re new to the neighborhood, and the person you first asked about your block was a bit grouchy,  I will welcome you here by leaving you this definition of queer by some inhabitants who have been living here for a long time.

“Queer to me means not being beholden to hetero & homonormative approaches to lifestyle, relationships, and politics.”

“It means people who exist on a continuum of conscious objection to heteronormativity.”

If this applies to you, marvelous! If you want to put your house on a short-sale and get out of the neighborhood as fast as your legs will carry you, I understand.

Identity is self-defined. You can experiment with your gender and sexuality. Feel free to stumble, change your mind, or dig into what aligns best for you. It’s really nobody’s business, and no one has been deputized as the Queer Police.

I just ask, out of courtesy, that everyone new to the neighborhood take some care with our street, and the time to listen to the people who’ve been fighting the city just to survive and have a livable space for so long.

P.S. Have a great time at the wedding.