When I was in the hospital with a T-cell count of 100, the woman I shared a room with, in an attempt to make me feel better asked me, “Do you know who Rudy Galindo is? He is so lovely. Like you, so lovely.”

“If he can survive this, so can you,” she said. That still stays with me. 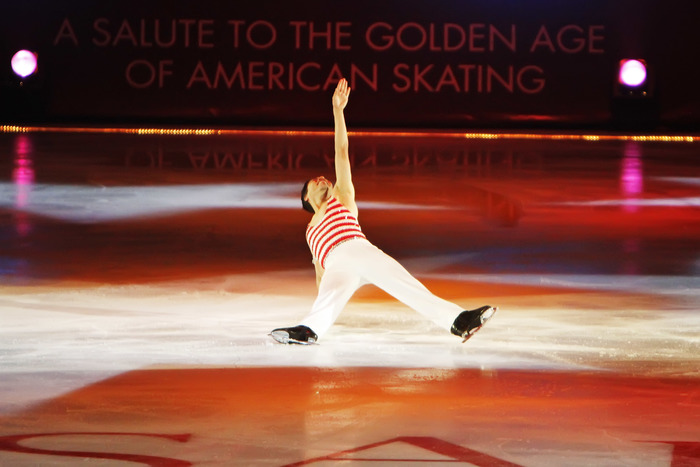 As a young queer femboy, I always felt as if I was walking on thin ice; always fearing that my queerness would be too heavy and somehow send me splashing in freezing cold waters. No one explicitly told me to be “careful;” it was just something I learned by the way adults looked me when I would reenact Debi Thomas’ 1988 Olympic exhibition performance to George Michael’s “One More Try” in my pink roller skates. No one had a problem with me skating but they certainly struggled with watching a little femboy do pretty moves that were reserved for young girls.

While I loved figure skating, I never much enjoyed the men’s competition. While some of the skaters were brilliant in their artistry, like Brian Boitano, there was always this unspoken rule that they, too, were skating on thin ice. While no one explicitly stated “Don’t be pretty, you’re a boy!”, I heard this message in the way commentators would used coded language such as “interesting costume choice” or “unusual spin combinations.”

Last week, I watched Adam Rippon skate one of the most beautiful free skates in the history of men’s figure skating during the team competition at the Olympics in PyeongChang. I had not heard of Rippon until that moment, but I was enchanted by his beautiful presentation. His performance, however, was simply gorgeous. It was pretty! I was harkened back to all of the times I skated with my pink skates.

It was in these memories that I remembered the fabulous Rudy Galindo.

My love for Rudy Galindo started in 1990. My aunt Janet, who loved figure skating, invited me over to watch the U.S. National Championships. Galindo was competing in the pairs competition with then partner Kristi Yamaguchi. I remember this night vividly because I was amazed that Yamaguchi was competing in both the pairs and singles competition. I also remember Galindo being interviewed after their performance and thinking Wow after hearing him speak. I saw a brown and femme-sounding boy who actually living out my fantasies.

Admittedly, I forgot all about Rudy Galindo. I would later discover that I was not the only one. While he was not “officially out” during the early years of his solo career, it was no secret in the skating world. This went against the “All-American” wholesome image figure skaters were expected to project. This impacted the level of support, which was close to none, and media exposure, Rudy received.

As Yamaguchi’s star rose as a solo competitor, Galindo’s career was quite the opposite.

This wasn’t entirely because he didn’t have the ability to land jumps, because he proved that he could. The world would later discover that Galindo was trying to cope with great losses off of the ice. He lost two of his coaches and his older brother George to complications of HIV. He lost his father to a heart attack. His mother, whom he adored, suffered from mental illness. Galindo was also surviving extreme poverty and his family, especially his sister Laura, gave up everything to support his dream. 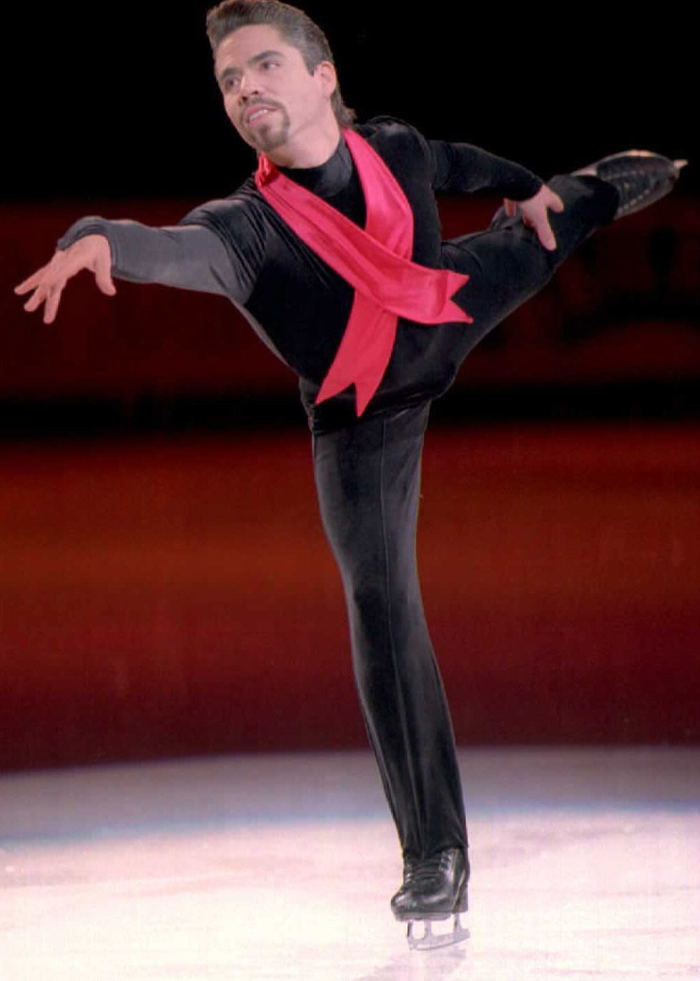 It wasn’t until the 1996 the U.S. National Championships that I rediscovered Rudy Galindo. After taking eight months off from skating, he decided to compete at Nationals because it was taking place in his hometown of San Jose, California. He had nothing to lose, after all no one in the skating expected much from him. It was in this time that he felt he had absolutely nothing to lose when he officially came out as a gay men in the Christine Brennan’s book Inside Edge: A Revealing Journey Into the Secret World of Figure Skating earlier that year. Of course this was to the dismay of the skating establishment but when you have nothing to lose, you have nothing to lose.

I instantly remembered who he was. And because I love drama, and soon as I realized he was the underdog, I was rooting for him. As he stepped out in the ice, my aunt said, “Ahh, Rudy. Hope he does well.” He skated to “Swan Lake” in a beautiful black suit. I watched with baited breath hoping that he’d land every jump. And he did. His performance was absolutely brilliant. It wasn’t until the cameras showed his sister crying that I began to cry, too. I became a fan that night. Looking back now, I suddenly realize that my aunt Janet wanted the gay skater to win. Makes sense because she always wanted me to win.

Galindo became the first Mexican-American to win a U.S. National Figure Skating Championship. He was also the first openly gay skater to do so. This was huge in 1996, because it was a time when professional athletes were still in the closet. For his performance, he skated to “Ave Maria” in a black catsuit, the AIDS ribbon wrapped around his neck and cascading down his chest. The performance was significant because AIDS was still the leading cause of death for all Americans ages 25-44.

As Rudy continued to heal and mourn the loss of his two coaches and brother George to HIV, on April 6, 2000, Rudy disclosed in an USA Today interview that he was living with HIV He stated, “”HIV/AIDS is not a death sentence. you can go out there and do what you want.” He especially wanted Black and Brown gay men to hear that message. He has since become an inspiration to people living with HIV.

I continue to follow Rudy’s life on and off the ice. His groundbreaking performances still leave me in complete awe. His most memorable for me is when he skated to “Over the Rainbow” while holding the Pride Flag during the 1998 U.S. Pro Classic. It was the first time in the sport’s history that a skater so proudly declared their queerness, on the same rink–queer skaters like Adam Rippon get to skate in today.

Galindo has since retired from figure and now coaches up and coming skaters. He recently celebrated a win as a coach when one of his students made it to the U.S. Figure Skating Championships in the Novice Men category. Off of the ice, Galindo is an award winning HIV activist and continues to speak around the country promoting the importance of health and wellness in queer communities. He was even declared a National Treasure by Congresswoman Nancy Pelosi in a ceremony in March of 2000. This has largely gone unknown because as a culture, we are generally just taught about the history Olympic Champions, and not the champions who made history.

Mainstream news and sports media outlets still struggle with lifting the narratives of the of LGBTQ people in a way that is affirming. Queer erasure is insidious and we must be diligent in keeping the legacies of our queer icons alive. It is especially important that we do so while they are alive.

Just a few days ago, I tweeted a thread highlighting some of Galindo’s best performances and the adoration from people all over was swift. And it didn’t go unnoticed, as he tweeted, “Thank you so much for this” and posted his gratitude on Instagram.

While Galindo may have never competed in the Olympics, he is a queer pioneer and visionary that has forever changed the sport of figure skating. So as we celebrate and root for Adam Rippon, let us all shine light on the beautiful legacy of an unsung hero and National Treasure that is Rudy Galindo.