I was 21, sitting on the grass of Tompkins Square Park in New York’s East Village. It’s the end of my first semester of college, and I recently quit going to the weekly Campus Crusade for Christ meetings when I realized that I felt more alive and honest hanging out with my new, queer and artsy friends at house parties

Holding forties in paper bags, my college friend and I chatted with her friend Chetta. She’d told me that Chetta was an out-and-proud gay woman a few years older than us, and I’d been looking forward to meeting her. Chetta went to a Seven Sisters school and was about to start law school. I went to a state school and was trying to figure out what to be when I grew up. I hoped I wouldn’t be too intimidated to make a good impression.
“So what’s your deal?” Chetta asked me.

That was the best word for how I felt at the time. I had crushes on guysespecially pretty guys whose soulful eyes gave off vulnerability vibesand I was in love with the way it felt when they pursued mebut when it came to eroticism, I never fantasized about sex with men, and needed to think about women in order to get off. That afternoon in the park, I was barely out at all. My parents would freak if they knew. But now, I lived on the Lower East Side. I could be myself. The Meow Mix bar was just a few blocks away, although I hadn’t yet darkened its doorway. I planned to check it out soon.

“Are you really?” Chetta asked. “Or are you just a coward?”

I felt like someone had just dumped a bucket of cold water on my heart.

“How can you say that when you’re a lesbian?” I asked. “Isn’t that hypocritical?”

“Not at all,” Chetta said, “given how many,” she air-quoted with her fingers, “’bisexuals’ have broken my heart. Do you know how many of my ex-girlfriends left me for men? It’s bad for gay people. It’s bad for gay rights. It makes guys think that all lesbians are available!”

I debated with Chetta until I noticed, with horror, that my eyes were filling with tears. I still cry when I’m angry, and when I’m frustrated. It’s unfortunately the way I’m wired. I’ve since learned to think of a word, and then think of a word that begins with each letter in that word. It helps. But I did not know that then. I got up and walked away. I walked away from Chetta, and I walked away from the uncomplicated truth of who I was, and from the idea that I could blossom into myself safely in lesbian circles. 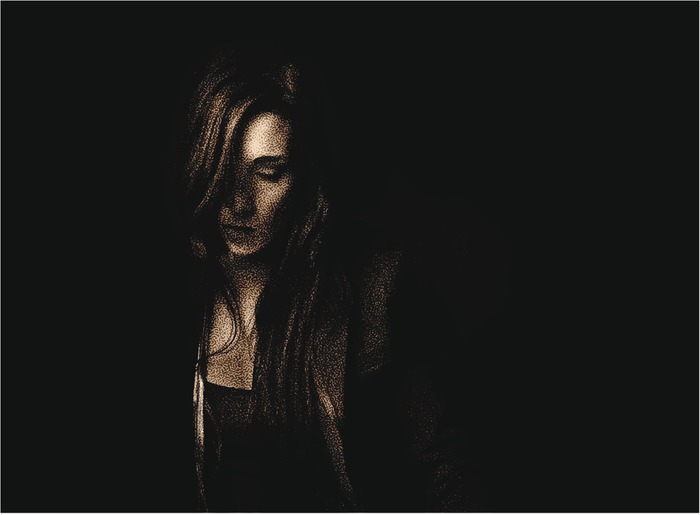 I’d grown up going to church every Sunday, saying grace before meals at home, writing in my prayer journal before bed, and getting dunked in various man-made and natural bodies of water to be baptized and born again (and again). I remember the cake afterwards (sheet, decorated with pastel wire-and-tulle butterflies) more than I remember any feelings of inner transformation.

On any given Sunday, the pastor might preach about forgiveness, grace, or patience, but every now and then he’d devote a whole sermon to the evils of homosexuality. I didn’t yet have a sense of my sexuality, but I did know that it felt different. As I sat in the pew, I felt guilt and fear and dread. And sadness.

In the church, I had been groomed to feel wrong and ashamed of who I was, and that old puzzle piece fit perfectly into Chetta’s reductive and judgmental picture, too. Church and Chetta had no love for me.

After that day in the park, I ended up in relationships with men. They pursued me, and I enjoyed them on a lot of levels. If I had been less cowed by Chetta, I would have confidently pursued relationships with women, and I would have had a chance to notice how much I love being with them. It would have showed me that as much as I liked being intimate with men, in retrospect, it felt like settling, like camping out near my ultimate fulfillment instead of living in the hot heart of it. I skipped a developmental step, and it ended up costing me and the man I married dearlywhen I fell in love with a woman at the age of 35, at a time when I was strong enough, individuated enough, to see that I could actually live a life that made me happy instead of living my life according to other people’s values and approval.

In fairness to Chetta, it was 1994 when she read me her riot act. Most people were still very hung up on seeing the world through a binary lens. Gay or straight, not the glorious smorgasbord of nuanced sexual identities that we can find ourselves within today.
I have been with my wife, Laura, for nine years and ten months. For 11 years, I haven’t felt desire for a man. The truest thing for me to call myself is a lesbian. But the truest thing for me to call myself on the grass in Tompkins Square Park in 1994 was bisexual. The timeframe between 1994 and 2007, that’s trickier. But I also don’t feel the need to get all forensic about it.

To help other women like me, I edited two anthologies, Dear John, I Love Jane: Women Write about Leaving Men for Women (Seal Press, 2010) and Greetings from Janeland: Women Write More about Leaving Men for Women (Cleis Press, 2017). I have celebrated and affirmed the new paradigms we are fortunate to live innot just marriage equality, but a “So what?” reaction to women who formerly identified as straight moving into gloriously fulfilling same-sex relationships. I feel so lucky that I can just live my life and love my wife without being buttonholed and interrogated about it by straight or gay people, and I think that if Chetta and I were to have that conversation today, it would be a different one (at least, I hope so).

That’s why I was so shocked by what happened at a Greetings from Janeland event in Albuquerque’s Bookworks bookstore just one month ago. I shared about the Chetta conversation during the discussion, and a 28-year-old woman piped up to say, “That just happened to me. I’m bisexual, I am married to a man. I don’t know if I have a female soul mate or a male soul mate, but I definitely know that he is my person. And my friend, a lesbian, told me that I was a coward, that bisexuality was a phase, and that my marriage was a sham.”

As I looked into her honest brown eyes, I felt my throat clutch with pain. Here it is, 2017, and a certain subset of lesbians still feel entitled to throw shade at queer women who don’t identify as 100% lesbian. If there’s anything I’ve learned along the way, it’s that trying to stick people into tidy categories is a fool’s errand. One of the women who contributed her story to Dear John, I Love Jane is now partnered with a man; they are married and she recently had a child with him. One of the contributors to Greetings from Janeland divorced her husband after she realized she loved women, but later found that she was happiest with a man, in an open relationship.

Chetta might read this story and punch the air, yelling, “I knew it! You’re actually a lesbian!” but unless I’m the only one she berated, she’s done so to bisexuals who are still bisexual, or who perhaps now identify as straight, or asexual, or as non-binary, masculine-of-center, gluten-free pansexuals. People who want to sort stuff into tidy categorieswhether they are born-again Christians putting same-sex desire into the sin category, or lesbians putting bisexual desire into the phase categoryshould really go find a bucket of mismatched Legos. Now that’s a worthy (and perversely satisfying) quest.

Throwing shade at a person’s sexuality is not just misguided, but counterproductive. Oh yeah, and it hurts. Here’s my message to the judgy gays out there: If you really want to help a queer person who is at the beginning of their journey, show them something they haven’t been able to reliably find with family, at church, or in their straight-girls book club: open-minded acceptance and support. It’s a win-win. Just think of how many messy, surprising, unexpected, delicious, and true things might be inside you, waiting to surface, waiting for you to relax enough to let them.