A few weeks ago, I saw an excellent thread from George M. Johnson on Twitter about what it means to openly live as a queer person later in your life. You essentially undergo “a second adolescence” and you kind of stumble through decisions that should be easy for “adults” to make, but which you are approaching anew, like a tween.

Well, as I have learned as a queer, Black femme, dating is not immune to this phenomenon and it is in fact something I learned the hard way in college. Being queer has done a number on what I think about dating and has it all upside down in the following ways:

You remember all those silly rules you heard in middle school and high school about dating [straight] guys that you laughed at but low-key carried with you for the rest of your life? Like having him pay for your meal during a date, or picking you up before a date, or opening your car door for you, or texting first and etc.

Well, turn to your neighbor and say “Neighbor, that shit no longer applies.”

Seriously. I don’t think I’m Rico Suave or anything, but I feel like I knew an adequate amount about dating until I started to identify as queer. The moment that happened, all the rules that would work on a budding relationship between a heterosexual man and woman when kaputz. Now when I go on dates with other folx who happen to be queer as well, I’m never sure about anything, including who pays for the meal (or if we split it), who texts back first, or how long I wait to check in after a date and all that nonsense that seems petty in the abstract but can quite literally induce panic in my brain in real time.

Essentially, openly dating as a queer woman hit a huge reset button on my life and now…I am Jon Snow. I don’t know shit.

Case in point, a couple of months ago, I went on a date with a woman at some hipster restaurant (I know, I know. It was cheap though). The date itself was fine and we clicked pretty fast. The scandalous part of the date didn’t happen until the check came and we both immediately reached for the bill. Mind you, in the past, I would have let ol’ [straight] dude pick up the tab if he wanted because a. the muthafucka makes a dollar to my every 64 cents and b. that’s what “tradition” taught me to expect (unless I had been the one to ask him out).

In this situation, none of that hetero shit applied. Sure, I had been the one to ask her out and had been prepared to pay as a result, but she was not going for it. The weirdest standoff ensued. I blinked at her and I was sure she was gonna let go of the bill, but she just looked back at me with this bomb ass smile. After like 10 minutes of this, I finally caved because I figured my Taurus horns were showing and that they shouldn’t be this visible on the first fucking date.But the awkward didn’t stop there. I didn’t know what the fuck to do the next day. Tradition dictated that to avoid looking “thirsty,” one should wait until ol’ dude texted about how much he enjoyed the date.

If he was not interested, he would not text. Simple. But that obviously wasn’t gonna work here, mainly because there was no “dude” present, but mostly because the more I dated other queer folx, the more I figured that dating rules were more trouble than it was worth…and that if we both waited to text based on those rules, we would probably (foolishly) never talk to each other again. So hell yeah, I texted first and it was well worth the risk. 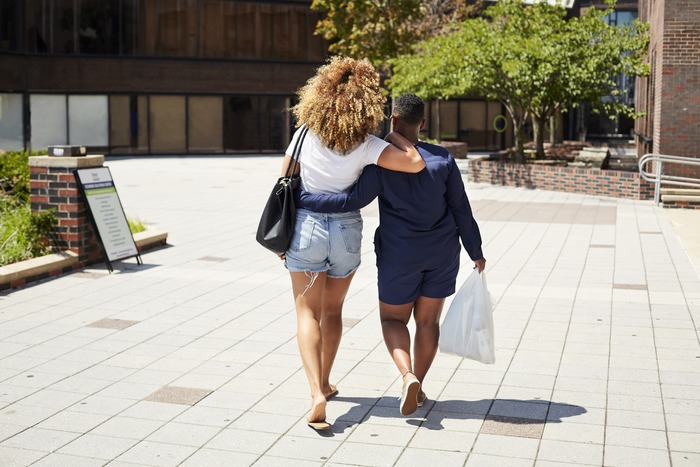 And speaking of risks when it comes to dating queer:

2. You suddenly have to flirt on hard mode.

Now, I have discussed the hard task of navigating the elusive “date” as a queer person, but what I haven’t yet discussed is the hard fought road to secure the date:

Yes, my queer brethren. Once you become awakened to your own queer spirit, it is commonly known that you now accept new terms and conditions when it comes to flirting and you realize from that moment on that you will be flirting on hard mode.

To explain, more often than not, I am always unsure about if the person I want to pursuit via flirtation is also queer. This has drastically changed my approach from “confidently asking” to “flirting until I think I may have a teenie-weenie chance with the intended person.” There’s a real fear in approaching now, which is something I did not feel when I believed myself to be straight. I say this because society assumes everyone is cis and straight (and therefore automatically approachable) unless informed otherwiseand even then, people still ignore the “otherwise” (particularly straight men).

Like, I’ll be honest. Even though I’m pretty awkward it comes to flirting, I previously considered myself a decent flirter and managed to skate on by like a mediocre Chet mainly because it is not hard to flirt with/impress a straight guy. As long as I was cooing over how hot they were, or telling them how smart they were, or generally stroking their ego in any way, shape or form, I was in there like skinwear.

Now? Not so much. Particularly when it comes to flirting with other femmes or non-men. The bar is not embedded in the mantle of the Earth like it would be with straight men. And flirting with them has taught me that you can’t assume shit. At all.

And speaking of not assuming anything:

3. Dating as a queer Black woman has truly shown how deep people’s dating biases are.

I’d say that the most important thing I have learned while dating as a queer Black femme is this:

Do not assume that everyone, even other members of the queer community, will accept you or your identityespecially as it concerns dating.

To elaborate, in the LBTQIA+ community, we often joke about how the most privileged among us (that is cishet, White, gay men) have very restrictive dating guidelines (re: no fats, no Blacks, no femmes). But I have found that they are not the only subgroup with deep biases. Dating as a Black femme was always hard, even when I thought I was straight. But dating as a bisexual Black femme has introduced me to brand new biases I was not previously aware of and had only heard in passing.

Other femmes who identify as bisexual and/or pansexual know what I am talking about. The constant bi-erasure from the queer community. Taunts from queer folx and straight folx to “choose a side.” Not being considered “a real gay person” or worse:considered half-gay (I didn’t even know there was such a thingoh wait, there’s not). Being considered “a stepping stone” or “the first step” to coming out versus being your own sexual identity. And perhaps the most harmful of assumptions and prejudices against us is our presumed propensity for cheating.

Yes, other queer and straight folx assume that we are unable to be faithful and/or monogamous due to our attraction to multiple genders which is a lie, obviously, but also creates conflicts in relationships or potential relationships where there should be none.

Of course, I wouldn’t want to be with anyone who assumed such salacious lies about me or my character without even knowing me, but, as you can see, it does put pressure on bisexual folx to be even more selective about who we allow in our lives mostly because none of us deserve the stress of having our identities torn down and also because entering a relationship with someone who you don’t know is bi-phobic can ultimately put you in harms way if you’re not careful.

And at the end of the day, that really does sum up what it’s like to date as a queer Black femme. Yeah, it has its humorous moments where you’re falling all over yourself to not embarrass yourself and your previous weirdo hetero ways and your unlearning all the weird traditions that held you back in the first place, but it also has its unsavory points where you’re simultaneous erased or fetishized.

It is a precarious existence indeed, but one that emboldens me to live my truth regardless.