The New York Times has come under fire over the course of the last year for their skewed reporting on Trump supporters and generally contentious takes. On Friday, the scandalized newspaper published a bizarre opinion piece by Daphne Merkin titled, “Publicly, We Say #MeToo, Privately, We Have Misgivings.”

Essentially, the piece was a takedown of the #MeToo movement. It overflowed with victim shaming blurbs and nitpicky bullet points that criticized feminists and the fragility of the modern woman, rather than focusing on the toxic masculinity of modern men. Overall, Merkin’s words were jarring and revolting, and I was completely shocked that a female, self-identified feminist in 2017 could have adopted such a polarized perspective.

Merkin’s piece starts off soft and fluffy, luring feminists in like a shady van that says “women’s conference.” Then it takes a shocking turn for the worse and falls sharply off a cliff, right down into the depths of hell. There were parts that I initially agreed with: she suggests that just like every other social media movement, people publicly voice different opinions, too scared to say how they feel privately, knowing that the depths of human emotion can lead to confusing and deeply conflicted, flawed, or biased opinions on the matter. She’s right that this happens. Many times, I often feel aggrieved by the ways in which people publicly denounce something for the purpose of image upkeep, but don’t walk the walk or take action outside of a single woke tweet or Facebook Status. And with a single poof of magic woke-dust, the movement disappears as fast as it erupted.

But that’s not the point Merkin is making. She alludes to a series of private conversations with her peers that reflect deeply opposite viewpoints than the ones they put forth online via #MeToo. While there definitely is a form of social intimidation going on and people aren’t saying exactly how they’re feeling for fear of being labeled “problematic,” Merkin seems to just have really shitty friends. She insists that she hears “feminists” saying, “Grow up, this is real life” or, “What ever happened to flirting?” Or this gem: “What about the women who are the predators?” Since the Weinstein story broke in October of 2017, I have literally never heard a woman that I’m close withor a man, for that matterexpress these sentiments that, quite frankly, sound like troll tweets.

I, too, have been having very different conversations IRL than online, but these conversations are more along the lines of, “Where do we go from here?” “How does someone cope when an outed predator is someone they love and deeply care for?” “If I’m still too scared to talk about a time I was assaulted or harassed, am I an anti-feminist coward?”

The #MeToo movement has forced the entire country to reckon with their own behaviors and reevaluate what passes as kosher, what isn’t okay, or what we’ve personally done to perpetuate such disgusting and systemic behavior. Statements like Merkin’s are dangerous because they put the onus on women to stop reacting badly or to stand up against their harassers, rather than placing responsibility on men to stop being fucking predators. Her piece further inspires fear and intimidation and silenceand I say that as a person who has lived through multiple cases of sexual assault. Without even reading a piece like thisa piece that sends the message that if you weren’t violently raped at gunpoint and nearly bled to death, then you’re childish for feeling violatedI’m scared to speak up.

Many of my private conversations with friends emulate this very notion: If a man shoved his hands down my pants and violently inserted his hand inside me while I repeatedly plead for him to stop, and he didn’t, and I cried hysterically when I got homeam I a baby for feeling like I was attacked? Or does a man who wants access to the inside of my body just have that access because I wasn’t physically strong enough to ward him off?

The New York Times writer calls modern women “frail as Victorian housewives” who perceive themselves to be victims, and are too scared to say, “I’m not interested.” Well, here’s the thing: Even if you’re not paralyzed by fear at the audacity of a person who will do such vile things without your permission, even if you can muster the strength to say “no,” or to repeatedly say, “I’m uncomfortable,” or to cry and say, “Stop,” or to physically try to escape but have your wrists pinned against the bed sheetsit’s not enough. That is why victims are never at fault, because we are not the ones responsible for perpetuating the attack. I’m sorry I haven’t been blessed with superhuman strength or fire-breathing capabilities, but the fact is, men and women can get harassed, assaulted, or raped, even when they stand up for themselvesor beg or cry or run.

For me, probably the most insulting part was this passage:

“Expressing sexual interest is inherently messy and, frankly, nonconsensualone person, typically the man, bites the bullet by expressing interest in the other, typically the womanwhether it happens at work or at a bar.”

Obviously, there’s some queer erasure going on here, but that’s not the part that sent me reeling. As a queer woman, this message sent rage coursing through my body with the fury of 1,000 Mothers of Dragons. Queer women are blessed with a genetic disposition that allows us to romantically avoid toxic masculinity, male aggression, and long-standing gender roles. We spend our entire lives breaking down these gender roles and our internalized misogyny and homophobia, and unfortunately, some queer women adopt these qualities anyway, perpetuating the vicious cycle. 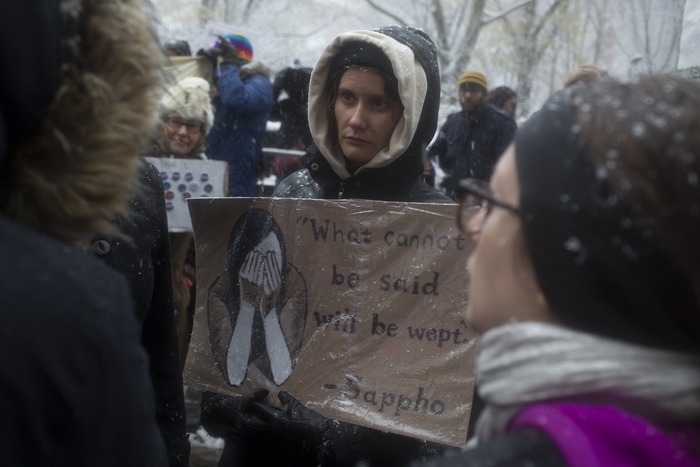 My point is: the idea that a man “bites the bullet” and expresses interest first is insane. In all of the relationships I’ve had with womenand again, I’ve been blessed not to encounter physically aggressive or toxically masculine womenthere is an equality in our relationship that I’ve never shared with a man. Trivial and anxiety-inducing modern dating-isms like who kisses who first, who pays for dinner, or who opens the door for who have seemingly fell to the wayside and melted away in my relationships with women, and it’s mollifying. With that being said, women who date women typically do seek and give consent more so than straight couples, in my experience.

The New York Times writer jokes that consent has turned into an unsexy childhood round of “Mother, May I?” That’s not true. In many of my dalliances with women, we actually vocalize things like, “Is this okay?” or “Do you like this?” and it never takes away from the momentit adds to it. It makes me feel safe and respectedand sexyand I’ve never once even chuckled at the notion of someone asking permission before touching my body. It’s my bodyyou should ask!

In my experiences, men never did that with me. That’s not because men are bad, but because, throughout modern history, we have taught men not to ask. Asking isn’t sexytaking is sexy! Amidst this cultural reckoning, women are standing up, begging, screaming to be heard: “Please ask us for consent!” And our cries are unsurprisingly met with menand women like Merkinclamoring, “What do you want? If only there was a way to know what it was that you want!”

We need to keep having these conversations. I’m glad Merkin wrote this piece (despite it being a ripoff of lesbian cultural critic Camille Paglia’s infamous 1991 essay “Perspective Needed — Feminism’s Lie: Denying Reality About Sexual Power And Rape“) because it’s an important part of the discourse. It’s the wrong part, but nonetheless, there are things that have yet to been said and complex feelings that have yet to be articulated, and that’s the whole point of #MeToo: Dialogue. We need to start vocalizing what behaviors are and aren’t okay, because apparently some people aren’t yet clear on this.

Merkin actually jumped on the typically male-inspired argument of, “Oh, so I can’t flirt now?” She even goes as far as to say that soon, we will worry about expressing our feelings toward someone, because the mere vocal expression of desire is inherently nonconsensual. If you need clarification on whether or not you can tell somebody that you like them, you’ve really lost your goddamn mind.

There’s no need to caustically insinuate that we begin “torching people for the content of their fantasies.” Unless your fantasies are fucking raping people, I think you’re okayand if that’s true, go to therapy you witless, gutless demon. It’s important to have these conversations, now more than ever, and I encourage every woman to start vocalizing their complicated and intricate, even sometimes morally flawed opinions, because at our core, that what we are: flawed and multidimensional. Victims are not the “frail Victorian housewives” that people like Merkin want us to believe we are. We will not stay silent any longer. There is nothing louder or more brave than calling out your abuser, and there will never be shame in doing that.