“Shouldn’t you have transsexuals in the show? No. No, I don’t think we should,” Razek told Vogue. “Well, why not? Because the show is a fantasy.”

While Razek has since issued an extremely half-assed but predictable apology (“it was never about gender”) it hasn’t been successful in repelling the tidal wave of criticism against the lingerie and swimwear giant.

Interestingly, a boycott of the upcoming Victoria’s Secret 2018 Fashion Show was already in the works. In mid-October, model Robyn Lawley took to Instagram to critique the show’s lack of size diversity: “Victoria [sic] Secret have dominated the space for almost 30 years by telling women there is only one kind of body beautiful.” Lawley encouraged followers to sign a Change.org petition — enough is enough — and use #weareallangels to showcase their diverse beauty (each post results in one donated bra to homeless women and girls around the country).

But Victoria’s Secret has always been a problem, and when a story like this gains traction and saliency through its intersection with queer identity it’s important we take time to situate it within its broader history of offense.

Let’s begin by picking at a few loose threads: in late 2011 an investigation by Bloomberg Markets exposed that Victoria’s Secret was using child labor from Burkina Faso in its cotton production, under the false pretense that it was “fair trade” and organic. The fashion label maintained its innocence, claiming not to have known about the child labor issue (which included malnourishment and abuse) as production was managed by Fairtrade International.

Woven into its very fabric is also a long and exhausting history of racism and cultural appropriation. Karlie Kloss’ 2012 mishap of walking the show in a Native American Headdress didn’t stop VS from using tribal and Native American-inspired costumes for their 2017 Nomadic Adventures segment in Shanghai. Nor did the immense backlash from the 2012 Go East “Sexy Little Geisha” outfit (which VS consequently removed from their listing) prevent them from revisiting the commodification and appropriation of Asian cultures in their 2016 The Road Ahead Paris show. It seems as if Victoria’s Secret treats culture like it does its lingerie: easy enough to wear, but even easier to remove. 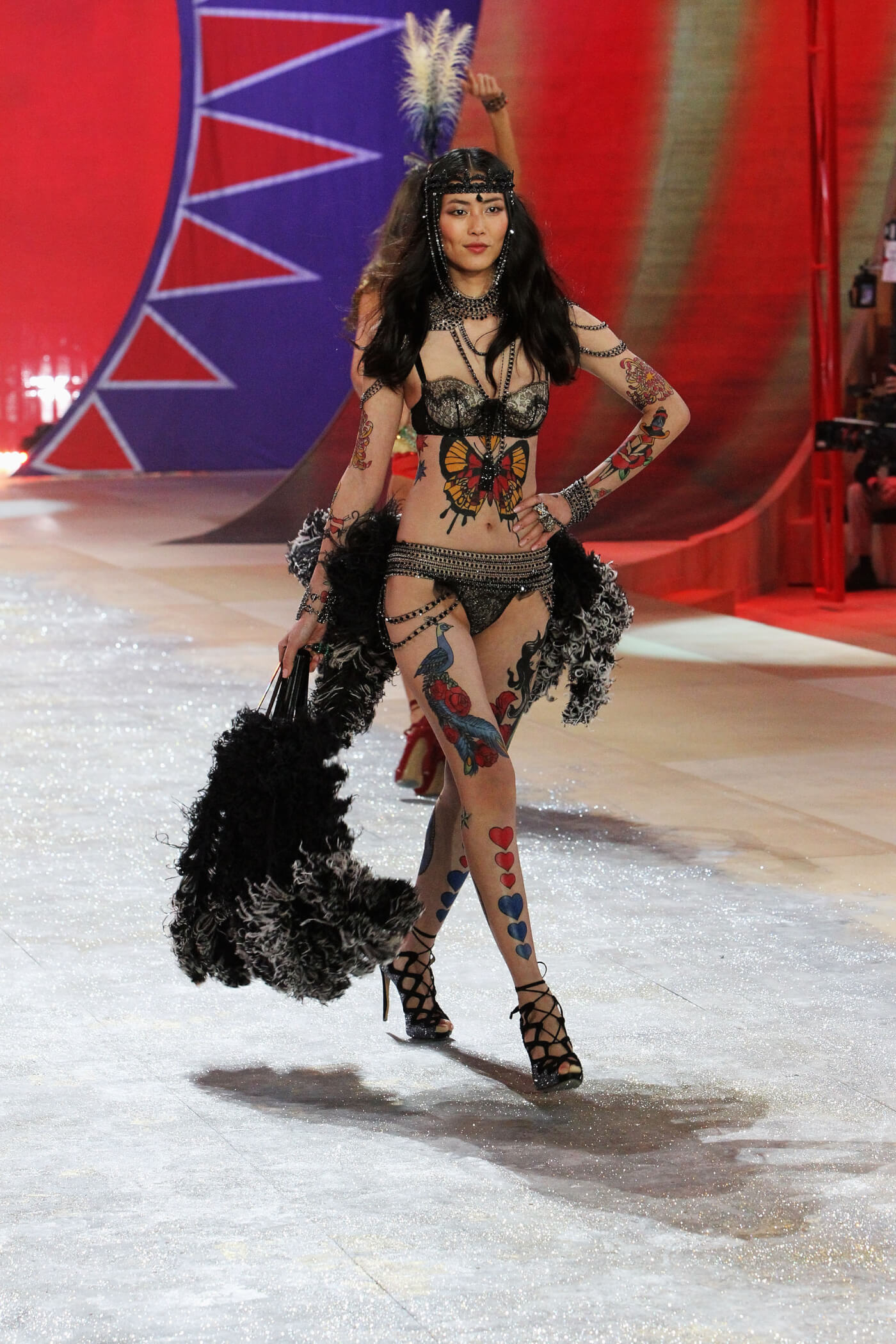 The 2017 Victoria’s Secret show in Shanghai marked the first time in its history that 50 percent of the models were women of color (55 models from 20 different countries). Yet not even a racially diverse cast could prevent a racist slur from being deployed at some point in the broadcasting.

Racial profiling at the Victoria’s Secret signature stores is also incredibly common. Earlier this year a woman returned to a VS store after an employee had accidentally left a sensor on a bra she had purchased. Upon explaining the situation to the manager — and presenting a receipt — she left her bags at the counter to continue shopping, until a police officer put her in handcuffs for shoplifting. “I think it was for the simple fact that I was black,” she said. In December 2016 a Black woman in Alabama was asked to leave a Victoria’s Secret store because another Black woman was allegedly being accused of shoplifting.

It’s almost incredible how racism and cultural exploitation has managed to pass through each point of Victoria’s Secret assembly line: from its child labor induced production to its artistic appropriations, the models’ representation, down to the store culture itself.

Within Razek’s ridiculous apology lies another important issue: Victoria’s Secret will always be about gender. The very core of its branding and approach to beauty is the creation and reproduction of anxiety within women, and fantasy within men. It taps into a cisgender heteronormative ideal because that’s where it centers its purchasing power and potential. Victoria’s Secret is in the business of making women feel inadequate and easing some of that inadequacy through consumerism. It’s objectification, just as it is a regurgitation of the patriarchy. It’s the consequence of having Ed Razek — a white cisgender male — at the helm. One could argue there’s an empowerment angle to Victoria’s Secret — the models might feel good walking it, you might feel good wearing it —  but I’d push back and ask whether empowerment is the ever same as power? Because who ultimately stands to benefit/profit most? 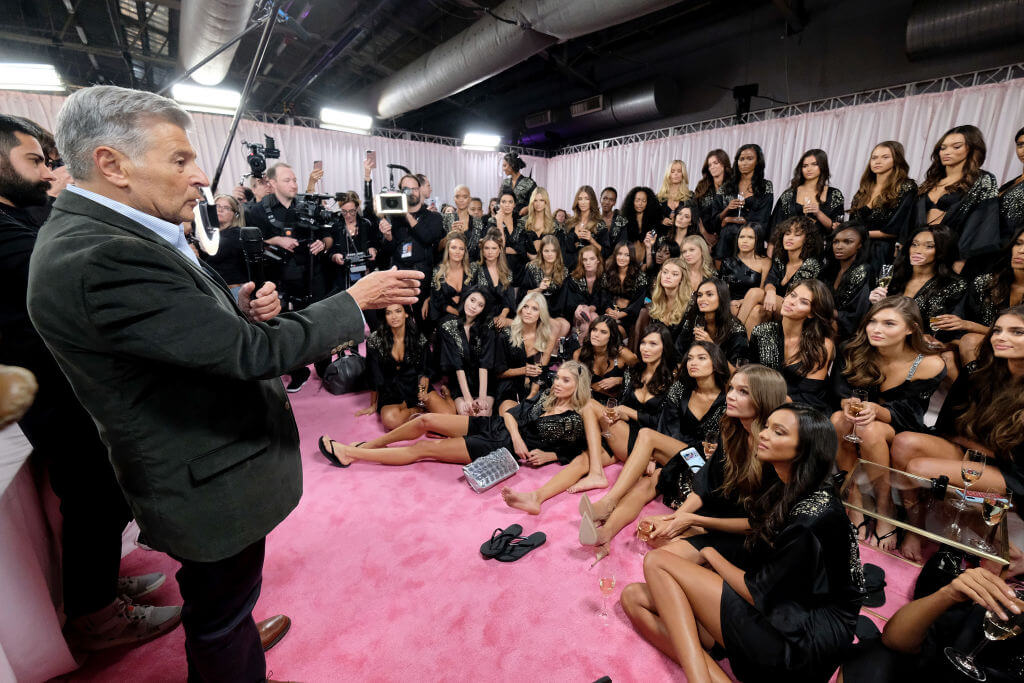 Many of our certified gay icons have contributed to the Victoria’s Secret fanfare: Lady Gaga in 2016, Ariana Grande in 2014, Harry Styles in 2017. This year: Halsey. But it’s important we don’t become distracted by shiny things and we understand the wider culture we’re perpetuating when we actively celebrate these moments. Beauty and fashion are largely celebrated by queer people because they’re vehicles for our individual expression and diversity. Ed Razek’s comments are hurtful and damning because we invest parts of our identities (whether financial, emotional) in these industries and our representation within them.

But I don’t think the answer lies in looking to reclaim Victoria’s Secret. Our queerness shouldn’t be defined, or limited by, our ability to change and influence institutions — there are far, far too many ugly seams to unpick. Instead, we should measure our queerness in how we set the old tapestries alight, and stitch new ones — brighter ones — in their place.

Victoria’s Secret is that it’s always been a problem. Maybe ours is that we never wanted an invite anyway.