Earlier this year I participated in an online modeling contest because, well, I’ve got a big queer body and I had something to prove.

What initially intrigued me was that the brand claimed to be about redefining what kinds of bodies are considered sexy and that made sense to me. I was ready to redefine something for myself. I’m constantly seeking that redefinition. It’s like how coming out isn’t a one-time thing, but a process. I felt compelled to keep revealing more of my truth in new ways. I had spent so long trying to evaluate my feelings about my body and I wanted to use this opportunity as a launching pad for the new self-assured sexy confident me.

Right off the bat, I want to say that as far as competitions go, it wasn’t altogether terrible, though it was strange. Going into it, I knew centering my queerness could leave me at a bit of a “disadvantage,” but it felt important to me to represent myself honestly. The brand’s “Boys Will Be Boys” aesthetic didn’t necessarily scream queer, but I thought, Shit, I might as well give it a try. I’m alive, right? I’ve got a body that you can put clothes on, right?

I submitted some “boudoir” photos that my photographer friend Erin Holsonback took of me in an empty luxury apartment in Austin, Texas. When we originally set up the photo shoot, it was with the same motive in mind. I was sexy and, dammit, I was proud of my body, all of my body. I love these types of photo shoots. They function like an allergy shot for my self-esteem. I take my clothes off, I put on the show of body confidence, and through fake-it-til-you-make-it magic — taa daa! — I suddenly I feel better about my body.

We shot the series on Halloween morning, and I was alternating between drinking coffee and prosecco as I imagine all successful people do when they roll around in bed while internally chanting “smize smize smize smize” and “you’re a giraffe, reach for the highest leaf.”

In the photos, I’m lounging around on a bed in some-guy-I-don’t-know’s apartment. I’m wearing casual grey sweat shorts and nothing else. My nails are painted, but otherwise, visually my look is somewhere near lawful neutral. I’m tattooed and chubby. I look like a lot of guys in their early 30s.

The photos are professional and I felt sexy in them. My fat was mine and I owned every inch of it. I know how thirst works, and I know that a large portion of the people who buy this brand are queer, so I choose the photos with that in mind.

In the application, I talked about my motivations for participating in the contest and my body positive approach to life. I detailed my queer community work and how I wanted to help others feel excited to show off their bodies. I talked about pushing queer voices and hoping to use the platform to minimize the divide between the straight world and the LGBTQ+ communities. I made sure to mention that I’d been in films and on television, being clear that I was already a working performer. I was trying to present myself as an easy sell; I had already modeled (for friends), I had personality, I fit the brand (I thought), and I was ready to hustle. 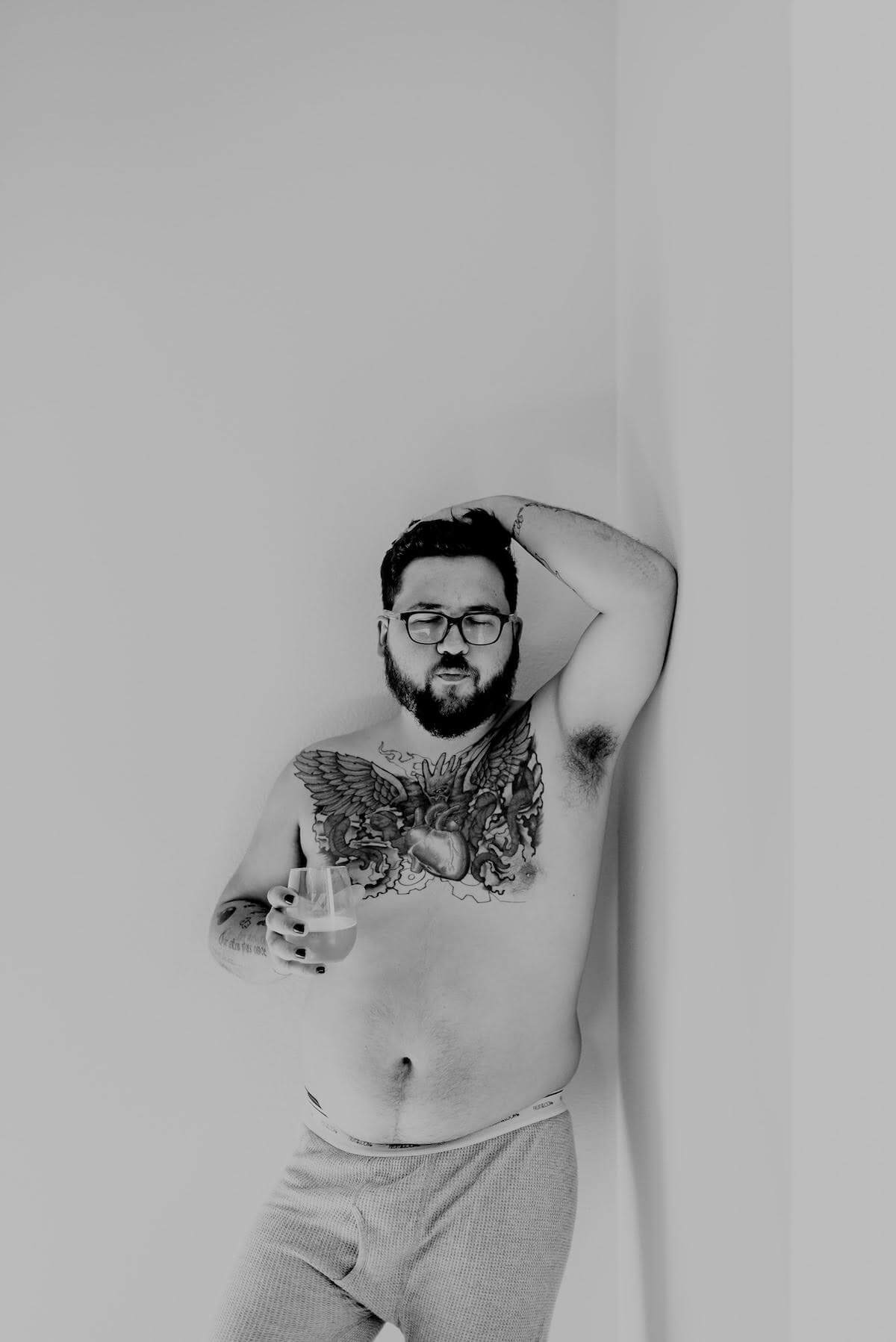 After submitting, I stayed active by sharing the voting link on social media platforms. I had a system of hitting Facebook, Twitter, and Instagram with new photos and a new part of my story each day. I knew where to go to get the most views. I knew what kinds of photos to post. I knew I could drum up likes from queer men online but instead of centering my masculinity, I tried to be what I thought was sexy. I’m wearing makeup in several of my shots. I wore women’s floral tops. I positioned myself as confident in my body. I wanted to show that after years of struggling with it, my weight was not a problem.

It was honestly fun. I got to be thirsty but with a message. And for the most part, it was received well and I got a lot of votes. Many folks messaged me with support and encouragement. I got a lot of congratulations on just being visible and unafraid (although I definitely was afraid). My mom shared it on her social media. My sister shared it with her conservative friends and family.

Something weird had happened: I was visibly queer, I was talking about activism, and people were celebrating with me.

On the other hand, it’s often hard to unabashedly celebrate your body publicly. Gay men in particular often drag each other down for… fun? For power? Because of shame? It’s not cool to be excited about something like your body. You can be excited about Drag Race, you can lose your shit over brunch or drama, but when you start to tell a story about your weight issues and how you learned to love yourself, all of the sudden it’s all eye rolls. You can post thirst traps on Instagram but if it’s connected to a statement about why your fat makes you feel powerful, suddenly it’s less sexy.

As I’ve mentioned in a previous piece about my experience wearing makeup, no one has ever been as cruel to me as gay men I don’t know. I wanted to weaponize my joy. During the competition, I saw a post online that reminded me of why I needed to do this: “Can we be done with all of these chubby gays becoming motivational speakers?”  I couldn’t help but think Shit, can my ass live? Some of us are just trying to feel sexy and helpful. You are perfectly capable of not paying any attention to me.

At the end of a two week campaign, I had amassed what seemed like a large amount of votes on my profile. Some guys had more; most had far less. I knew that the brand’s staff would be choosing a top 20 and I felt confident that I had a chance. Despite the fact that I wasn’t bro-y and I wasn’t standing with a woman in a bikini in my profile picture. Despite the fact that unlike 90 percent of the guys competing I wasn’t wearing some sort of nationalist American flag propaganda gear. I went to bed on Thursday and thought Wouldn’t that be weird if I made it? I could do so much with this visibility. I knew it was unlikely but the experience had pushed me to a new echelon of excitement around what you can do with confidence and drive.

I woke up the next morning to an email saying I did not advance to the final round. I scrolled through the photos of the top 20 and it was as I thought — American flags. Hyper-masculine. Lots of guys with women in bikinis. One guy had his chest hair shaved into the shape of a bikini. Most of them weren’t larger bodied at all. Six-pack abs were everywhere. A brand that claimed to be about redefining what a model looks like chose a bunch of very fit predominantly white men to represent them.

One of the top 20 was gay, which was relieving. He certainly wasn’t “chubby,” though he had a bit of a “former marine turned gay club boy” vibe. And honestly, I was happy. I got dressed. Went to work. Received a lot of messages from folks telling me that I was “robbed,” which was kind but untrue.

My boyfriend bought me roses at work and told me I was beautiful. The folks who loved me had followed along and were sorry to see me lose, and I was shocked to see just how invested in my experience people had become. All I could think was that I had won. Not actually — no, no, I definitely lost the competition. But I had won over my insecurities. I had won against my self doubt. I had put myself out earnestly, non ironically, and fully queer. And I was better for it.

In the application for the contest, one of the questions asked us to write a short poem about why we were Model Material. When I try to imagine what the straight-American flag waving, bikini-clad-woman-holding, beer-chugging competitors wrote my mind sort of spins out. I honestly have no clue what the fuck they would have written. But this is what I wrote. A silly but honest haiku:

I love my body

It holds all of my mush in

Thanks, body, you rock