When you enter the gates of Magic Kingdom, you pass under a sign that says “Here You Leave Today And Enter The World Of Yesterday, Tomorrow And Fantasy.”

No one does immersive world building as well as Disney, and when I’m at Disneyland I feel accepted and safe in ways I don’t usually experience out in the world. Disney is a special place for my partner and I; a place where I can be my authentic weird queer self, wearing mouse ears and my “I’m celebrating my dreams coming true” button that Disney gifted me the first day–not to mention our free upgrade to a royal princess room and watching the fireworks over Cinderella’s castle. All of this got me thinking about how important Disney and its magic is not just to me and my family, but also to so many other queer folks.

Why is it that so many queers love Disney? I promise we aren’t all just duped by capitalism, nor are we clueless victims of childhood nostalgia. Growing up, I enjoyed Disney as much as the next kid of the ‘90s, but it wasn’t until adulthood that it became so important to me. There is something special and magical about Disney stories and the immersive world building they create in their parks that lends itself to LGBTQs. 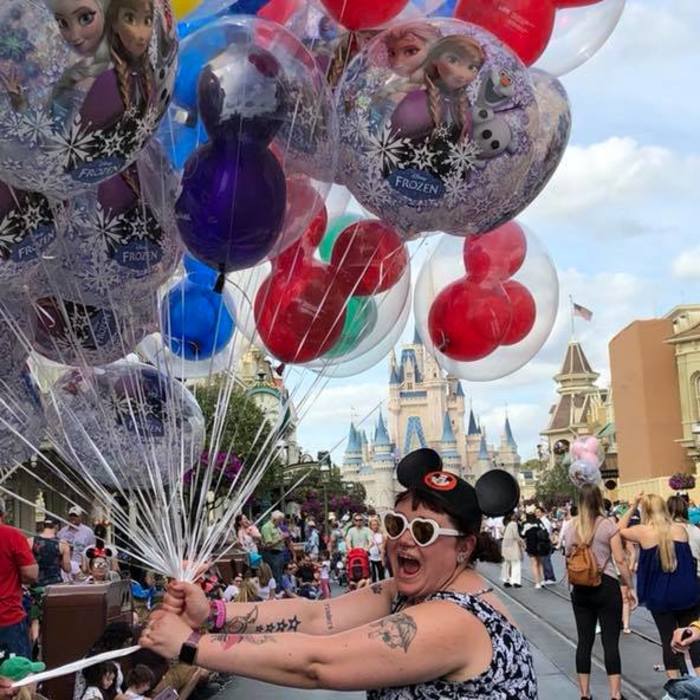 “My experience with Disney parts as an adult has also been super queer,” says Melanie Alatras a genderqueer tenderqueer living in Portland. “Going for Gay Days Anaheim has been delightful. Last year, my sweetie and I happened upon meeting the Evil Queen [from Snow White], who was mean to us and made our super Disney-appropriate kinky dreams come true.”

Disney theme parks are one of the few places where my queer family goes to vacation where even as visibly queer folks, I feel not just safe but truly embraced as my little self. I’ve had my own share of very queer interactions with Disney characters in the parks. One of my favorite memories was meeting Chip & Dale at Disney World a few years ago. The Chipmunks spent an extra long time with me and my partner, taking photos and signing our autograph book. Then Dale took my rainbow Mickey bracelet off my hand and put it on his own nose. I’m pretty sure that was Dale coming out to me. There was also the time where Captain Hook held my face and offered to pierce me with his hook–so kinky.

For some LGBTQ people, loving Disney is about remembering the ways in which the stories helped them through challenging times. Growing up in rural southern Oklahoma, Ari, a pansexual, polyamorous, nonbinary person tells INTO, “the transformative power of love in nearly every film was one of the few things that got me through my adolescent and young adult years.”

“Even now,” Ari continues, “I find myself picking up Mulan [or] Hercules–and though, those characters aren’t transgender, they do change. First for someone else, then for themselves. I’ve ventured into anime and other animated genres, but the classics never lose their shine.”

Disney’s animated movies and characters gave many LGBTQs a window to understand themselves.

“Ariel [from The Little Mermaid] gave me some of my first trans inklings,” says Rebecca (last name withheld), a trans lesbian from Virginia.

For other LGBTQ Disney lovers, Disney has central to building a kind of life that they never experienced as children.

“It’s an indulgence of an innocence I don’t remember having in childhood,” says Liz Hart, a queer Disney fan in Oregon. “I do think it can be judged as silly or tacky or uncool by a lot of the LGBTQ community, though, which makes me sad.” 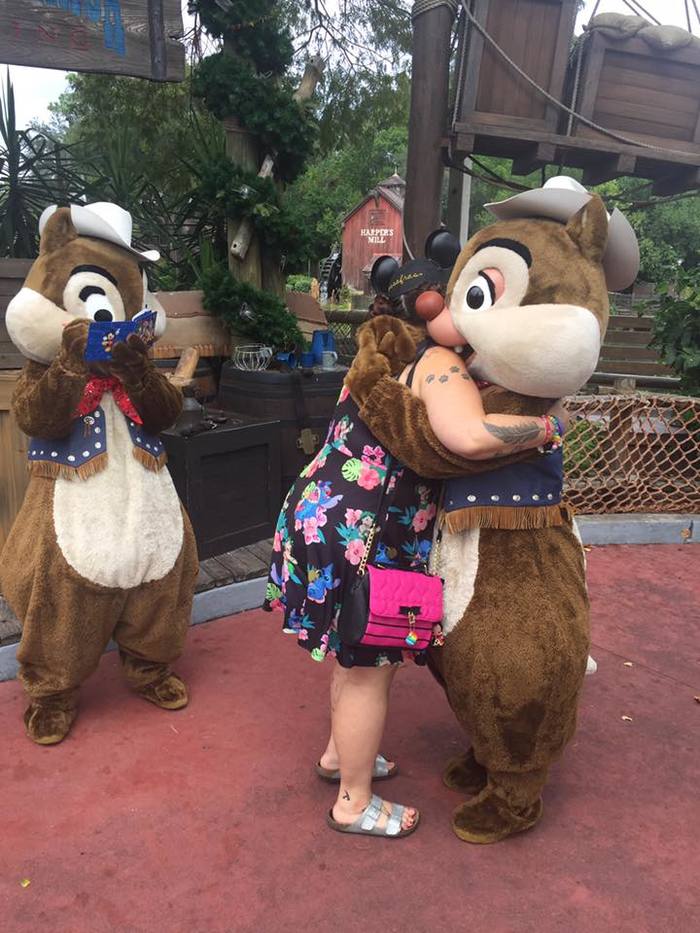 Hart says she identifies with the themes in Disney films.

“Like not having both/any parents, being brave when I don’t want to, and believing in myself, as well as loving to sing all the time like some butchy Snow White,” Hart says. “But when I’m at a Disney park I have no fear, I always have a smile, and the outside world is dead to me.”

Disney recently delighted LGBTQ fans with the brief but powerful inclusion of gay character Lefou in last year’s live action release of Beauty & The Beast. I cried the first time I saw it in the theater, and the audience cheered when Lefou danced with another man at the end of the film. I haven’t met Lefou in the parks yet, but I hope to someday.

There are so many LGBTQ people who feel a deep connection to Disney since 1991 there has been an annual large LGBTQ meetup in the parks called Gay Days. During Gay Days, attendees are encouraged to wear red shirts, and many include rainbow mickeys or other queer coded images. Although Gay Days is not officially sponsored by Disney, they are considered unofficially official because characters and cast members are aware of what the red shirts mean, and are known for paying special attention to LGBTQ visitors during Gay Days.

It’s worth noting Disney also sells many rainbow/pride souvenirs available in the parks year round. That kind of celebration adds an integral sense of safety that many LGBTQ people find within Disneyland and World.

“Disney is my safe haven,” says Nat Le Brun. “It’s happy and magical and, as a Little, gives me somewhere to dive right in and feel that beauty of innocence that I never had as a child. As a non-binary Aspie physically disabled lesbian in a very neurotypical heteronormative world it helps me break down barriers.” 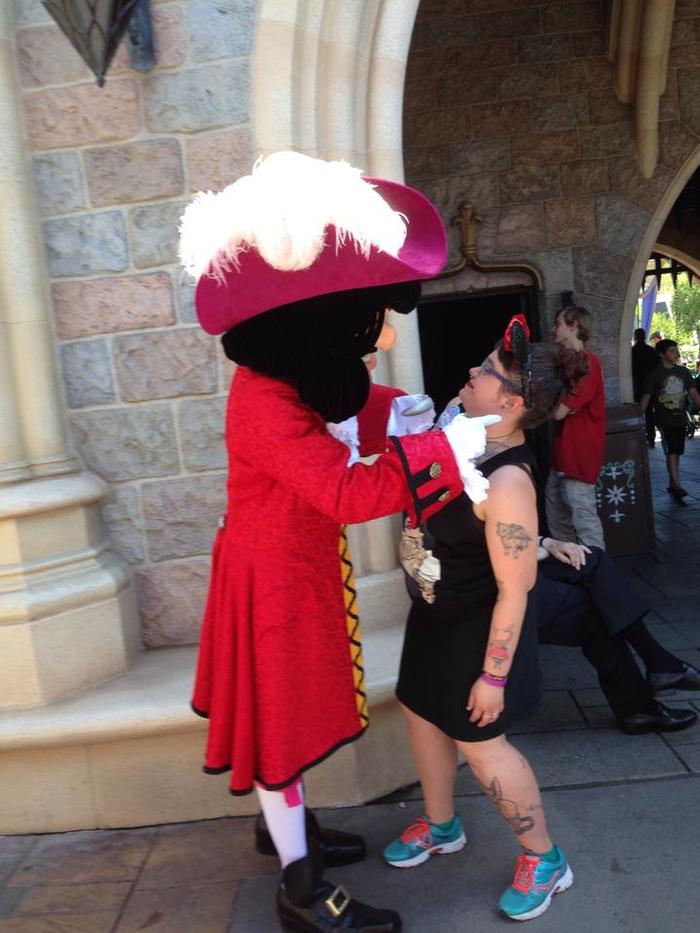 “I visit Disneyland a fair amount and I love seeing the baby queers there with their chosen families,” says Rizzo, a Mexican, agender queer femme in the Bay Area. “It is a sacred space where we can be who we are in all our flamboyant queerness and feel like nothing bad will happen. I have seen princesses even treat queers a little more special, cooing over their magical green hair or their pretty clothing. And queers beam, and I have held friends as they cried because, unlike so many other people in their lives, a princess recognized their queer magic and accepted it.”

As the song goes:”When you wish upon a star, makes no difference who you are. Anything your heart desires will come to you.”