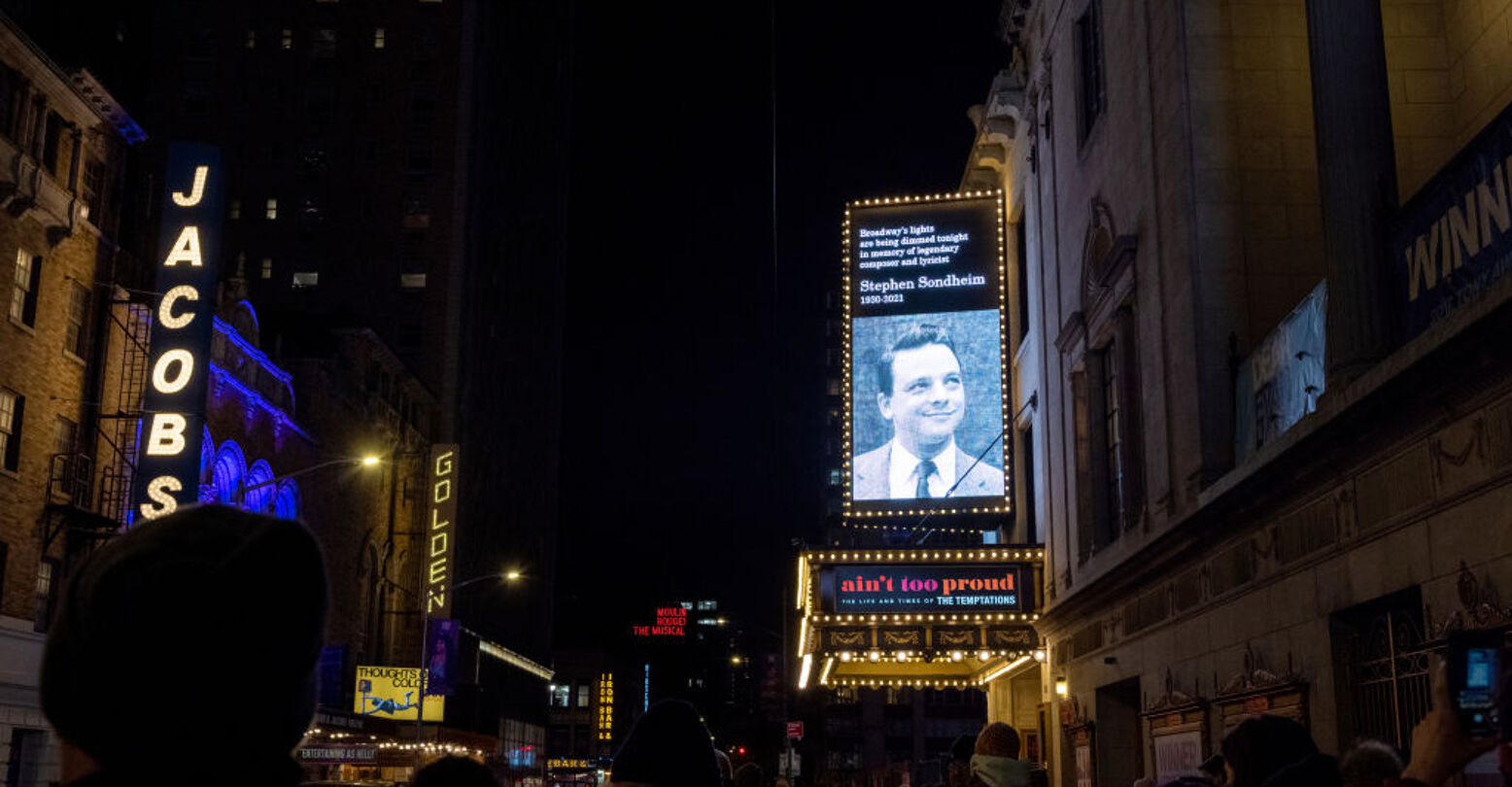 I used to think dead heroes were the best heroes. Dead heroes couldn’t be outed as some sort of abuser. They couldn’t turn to Twitter and start spewing bigotry one day. Whether or not a dead hero had problems, you knew what you were getting into. Their legacies were set in stone, warts and all. They were safe, in a way, and thus, better. At least, that’s what I thought before my living hero Stephen Sondheim died.

I was in the middle of a postponed Thanksgiving dinner when a friend texted me, “Oh my goodness Sondheim.” And I, knowing that Stephen Sondheim was in his nineties, but also knowing that another friend had just seen the man at a show on Broadway just the week before, turned to Google to confirm whether my sinking suspicions were correct.

They were. Stephen Sondheim had died.

I took a deep breath and excused myself to walk the dog. On my way out the door, I grabbed my headphones. I turned on the only cast recording that really felt appropriate, Sunday in the Park with George, going directly to the reprise of “Sunday,” when George Seurat’s grandson, previously disillusioned with art, returns to the basics, reading aloud from his grandmother’s notes the principles that his grandfather had always repeated to himself. Order. Design. Tension. Composition. Balance. Light. And Harmony.

When someone chooses to dedicate a portion of their life to that kind of giving, it can change lives.

I cried a lot during that walk. About an hour later, I quietly mentioned the news to my sister and mother. They clucked. What a tragedy. After the rest of the family left, I reemphasized how sad I was about the news, but now they were confused. He was in his nineties. He had lived a full life, active to the end. Plus, it’s not like I knew him personally. Why be sad about it?

Sondheim maintains a god-like status amongst those who enjoy musical theater, but the loss I felt wasn’t just related to the fact that Sondheim was my favorite writer. That doesn’t change after someone dies; the work is still there. So what exactly was I mourning? I wasn’t quite sure.

The day after Sondheim’s death, the internet was flooded with personal stories about how Sondheim changed people’s lives. I couldn’t really bring myself to read most of it—I haven’t even read his obituary in the New York Times yet (though I did order a copy of the issue by mail). But I did read Michael Chabon’s short blog post, “Remembering Stephen Sondheim.”  In the piece, Chabon remembers a time when, at an event where Sondheim was to receive the MacDowell Award, he and Sondheim came across a group of young women who were performing Sondheim’s songs for passersby.

“He listened some more. Critically. Obviously passing judgment on what he heard.

“That’s an interesting arrangement,” he added. Then slowly, creakily, wincing a bit, he hoisted himself to his feet. “I must go and thank them. And tell them how honored I am. They’re doing a nice job!”

One aspect of well-managed celebrity is grace, but another is awareness. Awareness of the impact that you leave behind when you speak to someone, whether or not you believe you should have that impact. Sondheim understood the impact that he had on those who loved his work, and he went out of his way to be as impactful as he could.

Let me be clear, I don’t think that our heroes owe us anything. I’m not making an argument that all celebrities should answer all their mail and give every person who passes them on the street their time. However, when someone does choose to dedicate a portion of their life to that kind of giving, it can change lives. Just this past year, Lin Manuel Miranda, a famed mentee of Sondheim, debuted as a director of a film about yet another famed mentee of Sondheim—Jonathan Larson. In Tick, Tick… Boom!, Sondheim (portrayed by Bradley Whitford) appears just when Larson needs him, when he’s barely hanging on to the last knot at the end of his rope. At the very moment when Larson is about to quit, Sondheim gives him encouragement, and it gives Larson the energy and hope to keep going.

One aspect of well-managed celebrity is grace, but another is awareness. Awareness of the impact that you leave behind when you speak to someone, whether or not you believe you should have that impact.

But it wasn’t only geniuses who were on the receiving side of Sondheim’s thoughtfulness. I heard from him myself, in response to a letter I wrote to him as I was finishing grad school (included with the letter was a photo of my graduation cap decorated with the lyric, “Look I Made a Hat!”). I don’t remember exactly what I wrote in my letter, but I know I had asked about writing. I was just starting out in my writing career, and I was feeling unsure of myself, of the craft, of what it takes to do something so strange and alien to my family and community.

In a few months, I received a kind and thoughtful reply, as many, many others did when they wrote letters to Stephen Sondheim. It was one out of thousands he sent throughout his life, and it is one of my most treasured belongings. The reason why I treasure it isn’t just about having my hero’s signature or his attention for a moment; it was the fact that he took my questions and worries seriously, and that he responded with real answers steeped in his own experience.

If you ask any artist what it means to be taken seriously at the beginning of your career, when you’re most likely not any good yet, they will tell you that it’s everything. That sometimes, a word or two of early affirmation is the one thing that keeps you from quitting over the years that it takes to build up the skill and knowledge needed to be any good at your craft. That’s what Sondheim gave in his letters, in his realistic responses (he didn’t seem to be a person who flattered or sugarcoated), and in his mentoring and attention.

This impact that Sondheim had on people could only have worked because he was one the greatest American writers of all time. When he said something, when he took your worries seriously, you had to believe in the weight of it, because he was Stephen Sondheim. And that belief, as we see in the countless stories coming out now, led to people continuing to make art when they would have otherwise long abandoned it.

Stephen Sondheim’s words and music have changed my life in innumerable ways. His books about writing and his lyrics have taught me so much about art and humanity and what a work of genius really looks like. He created masterpiece after masterpiece throughout his life, and people will listen to his music as long as people listen to music. But Sondheim’s art wasn’t his only impact on the world, and, for that, it really is a loss that he’s gone.♦