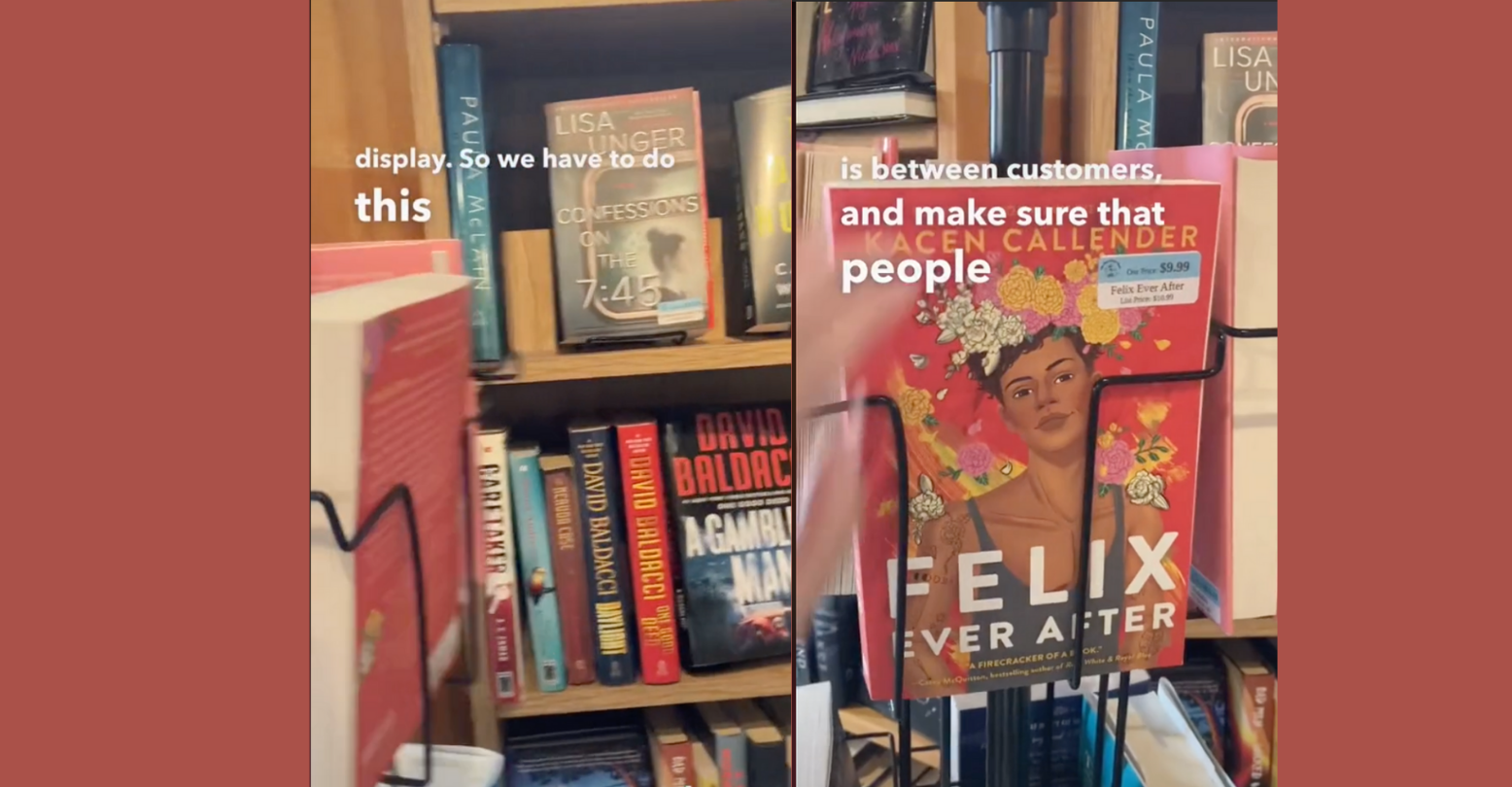 When Carrie Deming, based in Palmyra New York, started adding queer books to the selection in The Dog Eared Book – opened in January of 2015 – it came as a result of her firm beliefs; many of which she isn’t too shy to share in Tik-Toks and interviews.

“Bookstores should be a reflection of our communities,” Deming tells Forbes after one of her bookstore Tik-Tok series videos went viral with over two and a half million views. The series is simply titled: “More weird things that happen in bookshops,” and yet, the virality of the video unearthed a cultural trend sweeping through bookstores all over the country.

Deming noted that “almost immediately,” upon adding the new queer titles, strangers would pursue her inclusive collection and turn around any obviously LGBTQ+ novels found on display. Although she’s never caught anyone in the act, the phenomenon occurred with such frequency she recalls the staff found itself forced to “run around and make sure that people haven’t taken books that they don’t agree with and turn them around so that the back is facing the front instead of the cover.”

The owner, accordingly disturbed by her repeated findings, then decided to make a Tik-Tok capturing just one of the many daily trips she takes around the bookstore between customers. Camera in hand, Deming had no problem locating multiple books with same-sex covers on the front deliberately placed face down. The Queer Principles of Kit Webb by Cat Sebastian, Felix Ever After by Kacen Callender, Pumpkin by Julie Murphy, and The Hellion’s Waltz by Olivia Waite flash through the Tik-Tok as the books are lovingly flipped back over.

It’s worth noting the Tik-Tok in motion covers different areas of the store; so whoever committed the blatant hate crime actively sought out these particular queer titles amidst The Dog Eared Book’s entire collection. A disrespect of such nature quickly keyed Deming into the fact her regular customers couldn’t be responsible. Although, she suspects the culprits are “primarily casual browsers and tourists who flip covers or hide books they don’t like. Some people will feel comfortable purchasing from our shop after they have done this, others will just quietly leave.”

##stitch with @thedogearedbook thank you for agreeing that bookstores are for everyone!! ##booktok ##lgbtqbooks ##bookstore ##bookseller ##bipocbooks

Littered in the comments of the Tik-Tok are librarians and other bookstore owners pointing out they too experience this subtle yet distinctively dangerous form of queer censorship. In Deming’s own experience, she’s also received flyers of Bible passages tucked between the pages of LGBTQ books—which immediately find a comfortable home in the recycling.

Alongside written support, the video’s popularity incited a spike in online purchases and in-store customers. Seemingly overnight, Demings received three times her normal amount of orders from all over the United States; and, it’s not a coincidence the queer books featured in her video happened to be the biggest purchases. A pleasantly overwhelmed Demings calls the onslaught of attention “unexpected but so welcome.” Basically, the queer communal response reads anything you can do in hate, we can do better – and bigger – with love.

As for the offenders responsible, Deming’s has a lesson in bookstore etiquette: “Bookshops are for everyone, which is why we strongly believe in representation in our stock choices.”

To my fellow queer readers, here are a couple more LGBT book recommendations per Deming’s expertise. To get a “great feel-good fantasy” read The House In The Cerulean Sea by TJ Klune. If you’re on the hunt for “a dark, powerful novella that will make you think,” Deming suggests Every Heart a Doorway by Seanan McGuire. More of a “charming romantic comedy” type? She’s got you covered with Red, White & Royal Blue by Casey McQuiston. Looking to get your mind blown? Deming says Plain Bad Heroines by Emily Danfort is a “gothic metafiction unlike anything else I’ve ever read.” She tops off her carefully considered list with Yesterday is History by Kosoko for all of us who love a good “ YA love triangle with time travel.”♦