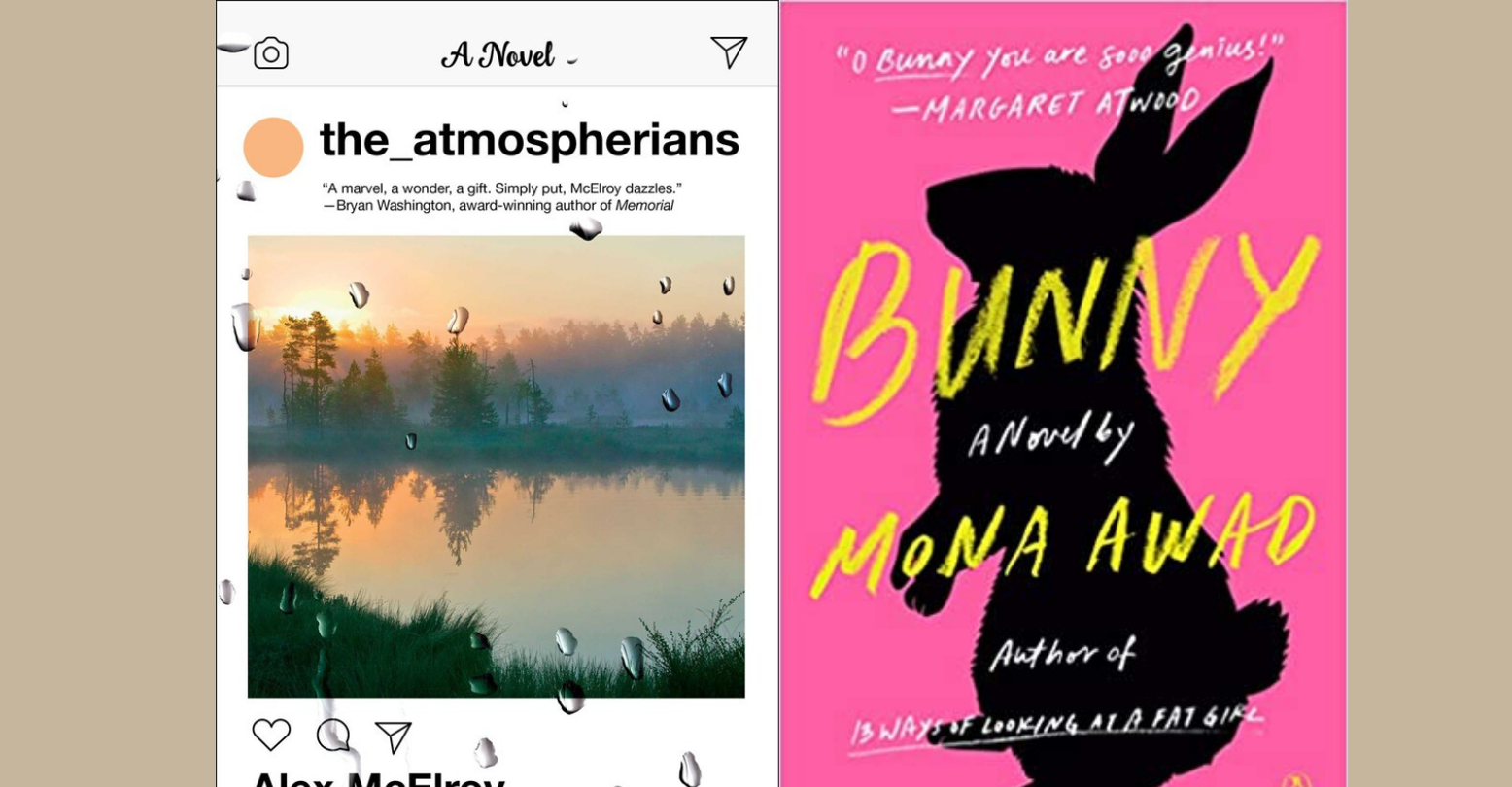 When I’ve already read two books by white authors before March, I announce that I’ve hit my quota, relegating any other whites to next year’s waiting list. It’s less of a fixed border than a vague aesthetical stance, an overcompensation for what I have been socialized to consume and to emulate not only in my own work, but in my personhood.

To fill the majority of what reaches my synapses by non-white artists feels easy enough. But to read trans books requires attunement to the indies, to the obscure out-of-prints because that’s so often where we’re restrained or otherwise choose to remain unperceived.

If the contrapositive is true, it shouldn’t surprise me that I happened to read Alex McElroy’s The Atmospherians and Mona Awad’s Bunny at the same time. I read them as evil twin novels featuring, respectively, groups of cis white men and cis white women trying to figure out how to be, though neither story frames this tension in precisely these terms. While neither are trans books, they both wonder if white masculinity and white femininity can be undone. Both circles are anxious but neither knows what to do with its mid-2010s induced white shame.

In The Atmospherians, Sasha, a white woman influencer, tries to repent for her very public downfall and rebrand by helping white men try to repent for the sin of being men in a newly founded cult started by her high school best friend Dyson. She also wants to repent for having taught Dyson to deal with his body image and daddy issues by purging, instigating what has become a lifelong health challenge.

I read them as evil twin novels featuring groups of cis white men and cis white women trying to figure out how to be.

The men arrive already pathologized by Dyson into twelve archetypes, including righteousness, negligence, and (wait for it) sports. Dyson transfers his failed coping mechanism to the participants, saying without saying that self-induced vomiting can literally purge masculinity from the body. But what’s purged also becomes laid bare: the men group-think until their own petulance, their whiny helplessness is all that’s left bouncing in the echo chamber. Plus sports! Their white male ontology is inextricable from their bodies.

In Bunny, the failed attempts at metaphysical undoing are fully disembodied. In the Smut Salon, A high-femme cohort of white-coded women writers “draft” men, the iterative process of editing and revising projected onto the creation of ideal men themselves. The magically constructed men are low-stakes experiments that combust because its creators lack the special Dude sauce to make complete men. The bunnies graft their desire for a perfect rendering of Man across so many trials of humanoid men that they literally axe at first flaw.

The men group-think until their own petulance, their whiny helplessness is all that’s left bouncing in the echo chamber.

As manifested by a cloying satire of cutesy-speak, the supersaturation of femininity in Bunny’s Smut Salon enacts Sianne Ngai’s (very bisexual) analysis of cuteness as both tender and aggressive. Whereas the Atmospherians use Instagram therapy language to evade self-reflection, the white girls of Bunny use a tenderqueer-adjacent vernacular. Their similarly sad, cis-heterosexual worldview is a mode of jostling for power, the tension among them redirected but never diffused. Instead of mirroring the disorienting hypocrisy of performative queer caring, the bunnies are just straight-forward, Karen-y passive aggression, with dollops of empty academia jargon, for some flavor.

Realistic fiction about cis whites is less often given this treatment. In her critique of a review of Ocean Vuong’s poetry, Paisley Rekdal identified how a non-white writer’s identity is always conflated with their work. As epitomized in last summer’s slew of anti-racist reading lists, Lauren Michele Jackson writes, so many people interpret “books written by or about minorities for educational purposes” and no more. These novels don’t give reads of whiteness or cis-masculinity or -femininity that aren’t already obvious to me. White cis-people are systematically careless about their collateral damage. To have survived is to have learned their machinations intimately. But even so, reading these books can serve their own (light) educational purposes.

Reading about how white people uphold power has helped me understand how to protect myself.

When proposing this essay, I hesitated to center whiteness and cis-personhood in ways that mainstream media already does. Brandon Taylor wrote in a recent essay about always negotiating the feeling of a “tiny white man in the way of [his] subjectivity.” As much as I can co-create my own affinity spaces, I relate to Taylor’s sentiment.

Near the climax of The Atmospherians, Sasha regards the mirror (a very trans activity) and reflects, “Seeing this side of the men was like wiping the steam off a fogged bathroom mirror. For a second, there would be perfect clarity, only for the steam to immediately return.”

And while reading and articulating how exactly whiteness reproduces itself will never be the heart of my artistic life, reading about how white people uphold power has helped elucidate the steamed mirror so that I understand how to protect myself. Knowledge may not always be power, but it can be an implement.

Both the Atmospherians and the bunnies still believe white cis-manhood is salvageable.

Beyond this utilitarian view, there’s still room for reading (and enjoying) the humiliations of these white people. Call it schadenfreude or restitution, but I don’t get enough of this feeling in daily life. These books’ dizzying, fun-house social environments are a novelization of the Spider-Man pointing meme. They kaleidoscope these white cis people out against each other, their images going nowhere but allowing my smug derision to amplify across every page.

It’s more than that: these stories make so plain their embarrassing want of so much more than whom they’re stuck being. No amount of group therapy or murdered drafts can solve their shame, because both the Atmospherians and the bunnies still believe white cis-manhood is salvageable. They can’t just escape themselves; they can’t imagine outside of their worldview. Reading these characters’ failures in self-awareness also clears the mirror for me and what I have had to create for myself and my communities. I could articulate what some of these modes feel like, offer my own performances of race and gender on the page or stage. But for today, this essay is sufficient exhibition.♦

Benedict Nguyen is a writer, dancer, and curator based on occupied Lenape and Wappinger lands (South Bronx, NY). Benedict’s poetry has appeared or is forthcoming in AAWW’s the Margins, Flypaper, and PANK. Their criticism has appeared in the Brooklyn Rail, Shondaland, the Establishment, and Culturebot, among others, and in commissioned profiles for Danspace Project, Baryshnikov Arts Center, and Fusebox Festival. They’re at work on a novel.