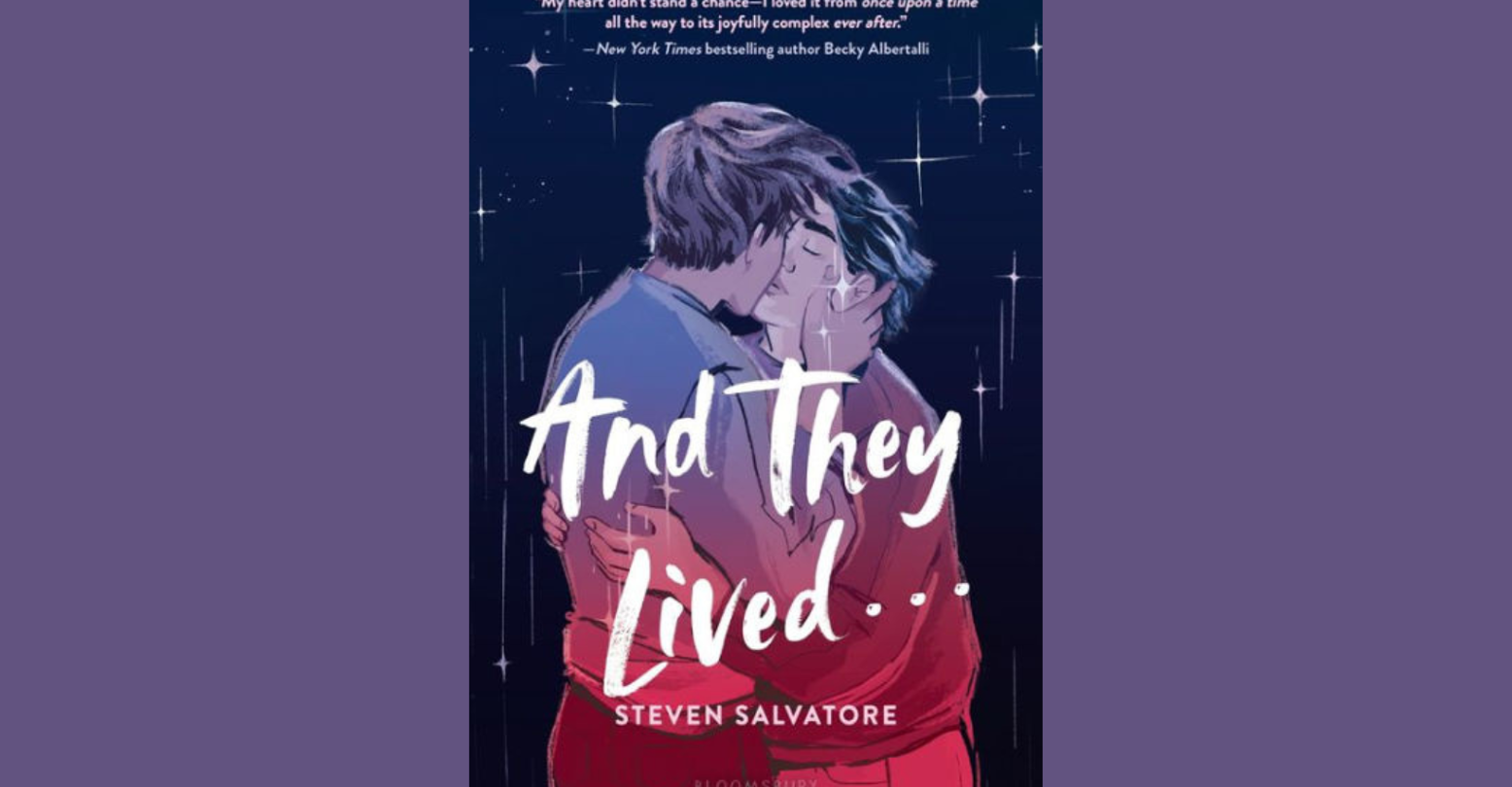 When I was a teenager, I only read the books that everybody else was reading. Now, I do everything in my power to give marginalized authors a chance to shine despite the spotlight being pointed elsewhere. This year, I made a (perhaps silly) bet with myself that I would actively promote queer books only, to make up for all those years of mostly only reading mainstream, heteronormative fiction.

And They Lived… by Steven Salvatore is one of those books that a younger me would have—reluctantly—overlooked, and one that I was so glad came out in 2022. After I finished the ARC, I was so fond of the characters and the story that I had to speak about them right away to someone, so I interviewed the only person I could—the author.

The year is already halfway so here’s a shoutout to my favourite books of the year so far!

This book immediately clicked with me because of how polyphonic it was. It’s definitely a romance, but I can’t say certainly whether the main romance is between two boys, a boy and his friends, or a boy trying to love himself. The story follows queer teen Chase Arthur as he embarks on a typical coming-of-age journey during his freshman year as an art student at college. There are various Aha! moments along the way, but they are quiet and reverberating, rather than the eureka epiphanies you’d expect from the genre.

Chase is already out as gay and genderqueer, so his story isn’t one about coming out; he’s hoping to make experiences and to figure out how to accept the parts of himself that he doesn’t like. For years, he’s dealt with eating disorders and body dysmorphia that come back to haunt him from time to time. “Everything that he experienced I experienced,” author Steven Salvatore told INTO on a Zoom call, “So it came from a very real, personal place.” The main character’s struggles certainly feel incredibly raw; while they are not the point of the story, they are there to add a unique realism to the narrative.

Chase is already out as gay and genderqueer, so his story isn’t one about coming out; he’s hoping to make experiences and to figure out how to accept the parts of himself that he doesn’t like.

One thing that Salvatore set out to do when writing Chase’s story was opening eyes to how damaging body standards can be, and how easily gay and nonbinary kids can fall into eating disorders and body dysmorphia. It’s become more normalized to talk about unattainable body standards for women, but they plague the queer community too, because it’s a space that is very “aesthetic-based,” in Salvatore’s own words “You’re already marginalized, and the one place you do think you fit in, you might not because of how you look.”

“Writing this book was very cathartic,” Salvatore confessed. Chase was born as a sort of alter ego that has existed in the author’s mind since they were 15 years old. “When I wrote him, he was me,” Salvatore says. Chase became a friend, and finally a way to get closure on a first love that didn’t conclude with a happy ever after in real life.

As suggested by the book’s title, there is a recurring fairytale motif throughout And They Lived…. Chase was raised on fairytales and now he gets to live his own, complete with a meet-cute and all the tropes you’d expect from a rom-com. Parallel to the sweeping romance he has with Jack, a poetry student in his year, there is the original fairytale that Chase is writing and animating as a final project for class, a story about two star-crossed princes falling in love. Salvatore has admitted he would love to write that story into a full YA fantasy book, sort of like what Rainbow Rowell did when she took the fanfiction her main character wrote in Fangirl and then published the story as part of the Carry On trilogy.

Chase was raised on fairytales and now he gets to live his own, complete with a meet-cute and all the tropes you’d expect from a rom-com.

The romance between Chase and Jack works so well because it’s flawed; the book never tries to sweep problems under a rug, successfully overcoming the all-too-common mistake in this genre where a character’s past issues magically disappear overnight once romantic love comes into the picture. Salvatore makes sure those struggles stay there, providing the real conflict of the story and allowing their characters room to grow and improve.

Chase’s initial friendship with Jack and the early stage of their relationship are nothing short of perfectly adorable, a dream sequence in which the outside world hardly matters besides the two lovers. Until reality barges in, of course. At the beginning it may look like Jack is the perfect love interest, a golden boy with a perfect family and not a single care in the world. But halfway through we learn that he also has a lot of trauma to unpack, specifically years of internalized homophobia fed to him by his conservative town. From Chase’s point of view, we don’t directly witness how all this weighs on Jack, but it’s not hard to guess.

When the inevitable third-act breakup occurs, it comes about in a way that I appreciated more than I can say. This book positively shocked me by consistently providing realism and setting good examples for its readers. At their lowest, the characters realize the only way out is to work on themselves, to go to therapy and deal with past scars and try to experience life without the other, to become better apart before they can be together. The real character development is for Chase and Jack to try and accept themselves and to understand that “self-love is a life-long thing,” as Salvatore puts it, and that “love really comes from within, and you really have to love yourself, and that takes a long time.”

It was a brave choice on the author’s part to present a struggling protagonist and to leave them still struggling by the end, rather than perfectly packaged and tied with a bow. “I worry about this idea that exists specifically in YA rhetoric and discourse that queer characters have to be perfect and everything has to be sanitized…” said Salvatore. “That if the queer character doesn’t love himself, this is automatically toxic… but name one person that really, truly, fully love themselves, I dare you.”

“I wanted them to have an openness with each other that is very real among gay friendships.”

This is true for the diverse cast of characters that color Chase’s life. None of the many friends he makes along the way are one-dimensional or superfluous or added simply for tokenism; they are all struggling in the way that all humans do, and they all have something to show us. At the end of the day, this book is a love story between Chase and his friends as much as it is a love story between Chase and Jack. The narrative is enriched by those ride-or-die friendships that are even more encompassing than romance; those heart-wrenching friendship breakups that are too often forgotten in literature but that hurt just as much as losing your soulmate sometimes. The highlight of my month was probably the bond between Chase and his roommate Benny, where Salvatore faithfully portrayed just how special queer friendships can often be. “I also wanted to create a friendship that was a very platonic gay friendship between Chase and Benny,” the author says. “I didn’t want there to be sexual tension between them at all or romantic tension, but I wanted them to have an openness with each other that is very real among gay friendships.”

The book ends on a deliciously sweet note and with bright hope for the future, as we remain very conscious that everyone is a grand work in progress. It’s clear that Chase and Jack’s story is just beginning. Will there be an ever after? Salvatore hopes they get to tell that story one day, they definitely have plans to write more about these characters. “Out of all the things that I’ve written, [ATL] means the most to me.”

And They Lived… is a romance that sweeps you off your feet while keeping you tethered to the ground with raw realism. It’s packed with teen angst and melodrama, the joys and sorrows of being young and unsure where you belong, and adorned with art and poetry. It’s a book every fan of rom-coms should read. ♦

This is Steven Salvatore’s second published book. Their debut, “Can’t Take That Away”, came out in 2021. Their third novel, “A Supercut Of Us”, will come out in 2023.