Within the LGBT Community Center, a historic hub on New York City’s West 13th Street, lies the Bureau of General Services—Queer Division. Despite the formal-sounding name, it’s actually a cozy bookstore and event space founded in 2012, selling everything from zines and Tom of Finland collections to Roxane Gay’s bestseller Hunger. In recent months, the Bureau has hosted events like self-defense classes, queer storytelling shows, and book talks. Now, it’s been transformed by artist Liz Collins, who has morphed the modest space into a colorful showcase of portraits by close to 100 queer artists.

Looking at Collins, it’s easy to see why she’s drawn to cultivating the vibrant and eye-catching. Her bright blue hair almost exactly matches the clothing she’s wearing when we meet, and there’s a metallic fanny pack slung around her waist as she adds some finishing touches to the installation. While she has never done a project exactly like Cast of Characters before, many of her past artistic endeavors contain an element of community engagement, such as Knitting Nation, a site-specific performance featuring groups of people knitting in spaces like museums and schools.

“I’m an artist who works with a lot of different materials,” she tells INTO. “In this situation I’m actually using other people’s work as my material, to create an environment.” 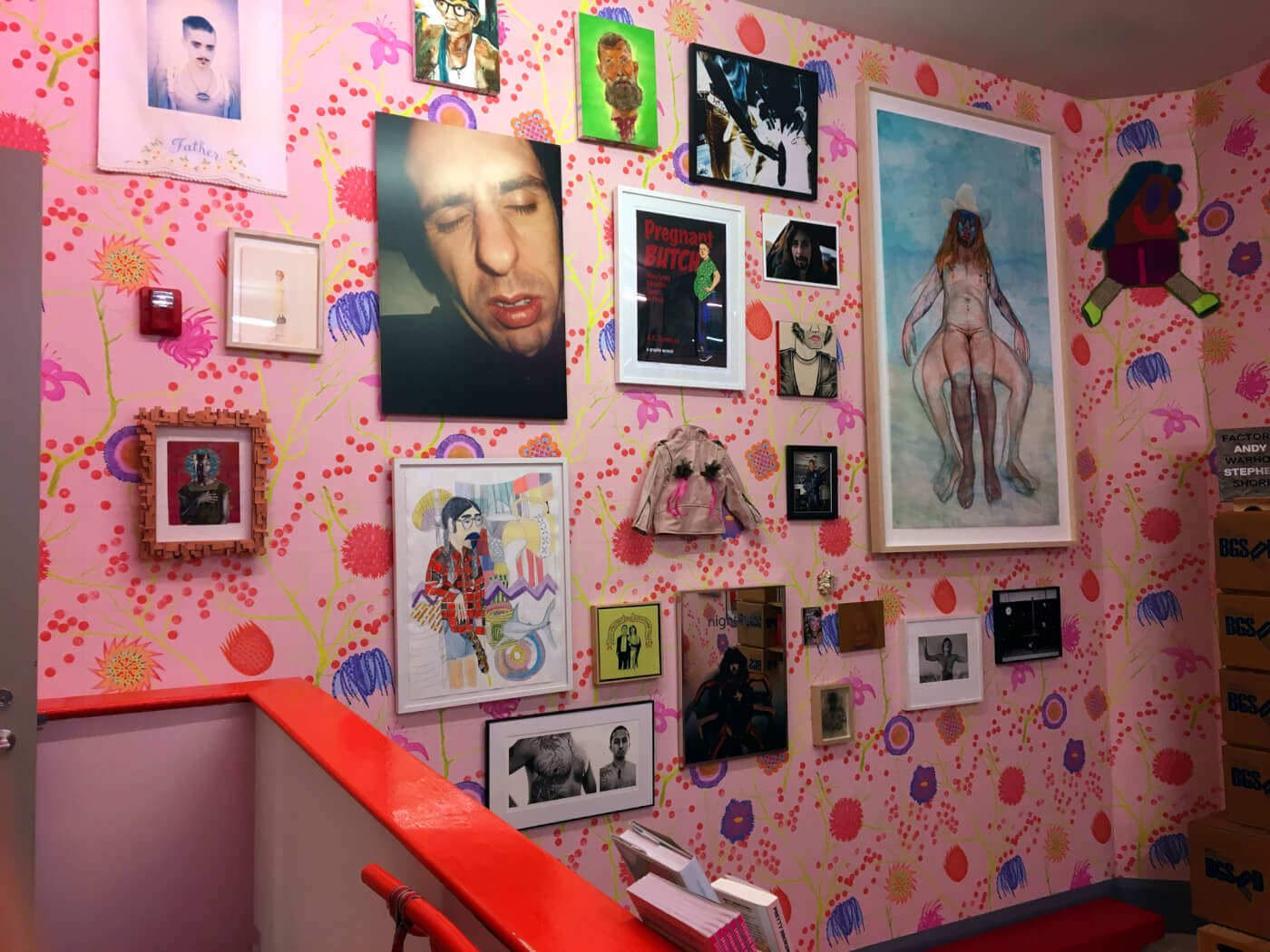 The artists that comprise Collins’s Cast of Characters were recruited from all over. Some were friends; others she met through the Fire Island Artist Residency or the Queer/Art/Mentorship program, where Collins has served as a mentor. A few, like Brooklyn-based tattoo artist Mars Hobrecker, Collins found on Instagram.

“It was fun, because in some cases I was getting things out of people they don’t usually do,” Collins adds. “Just kinda push people a little bit, saying, What is it you don’t usually do that you want to do? A lot of it for me is about engaging with people in different ways.”

Some artists indeed switched things up from what their audiences might be used to—cabaret performer Mx. Justin Vivian Bond contributed a small painting, for instance. Others kept to their most prevalent medium, like craft-based artist Rebecca Levi’s embroidered Self-Portrait as a Butch/Femme Couple and comic artist A.K. Summers, who is showing the cover of her graphic novel Pregnant Butch: Nine Long Months Spent In Drag.

“Almost all of my embroidered work is portraiture, but it’s usually of other people,” explains Levi, who tells INTO her piece Self-Portrait of a Butch/Femme Couple was based on two photos of herself she made into a drawing for a zine in the ’90s. “For this show, I wanted to include something more personal that documents my own queer history.”

You’d expect such a vast exhibition to showcase a wide range of queer experiences, and Cast of Characters delivers. It would be impossible to describe it all, but some of the work is unabashedly political (Chitra Ganesh’s Black Brockington, referencing recent victims of police brutality), some deals with queer history (Mars Hobrecker’s tattoo of the late queer icon Flawless Sabrina), some is quietly intimate (Sig Olson’s erotic-yet-tender photograph Will, Moving to LA), and some, like painter Nicole Eisenman’s self-explanatory Ass Rash, The Great Equalizer, is playful and lighthearted.

Most of the works are two-dimensional, but a select few are sculptural, like Vincent Tiley’s fetish-inspired Bust no. 1. There are even pieces with an interactive component—Lauryn Siegel and Virgil Taylor’s Queer Currency fashions a mirror into a larger-than-life money note that references and reclaims the old phrase “queer as a three dollar bill” and provides a space for an onlooker to quite literally see themselves in the piece. 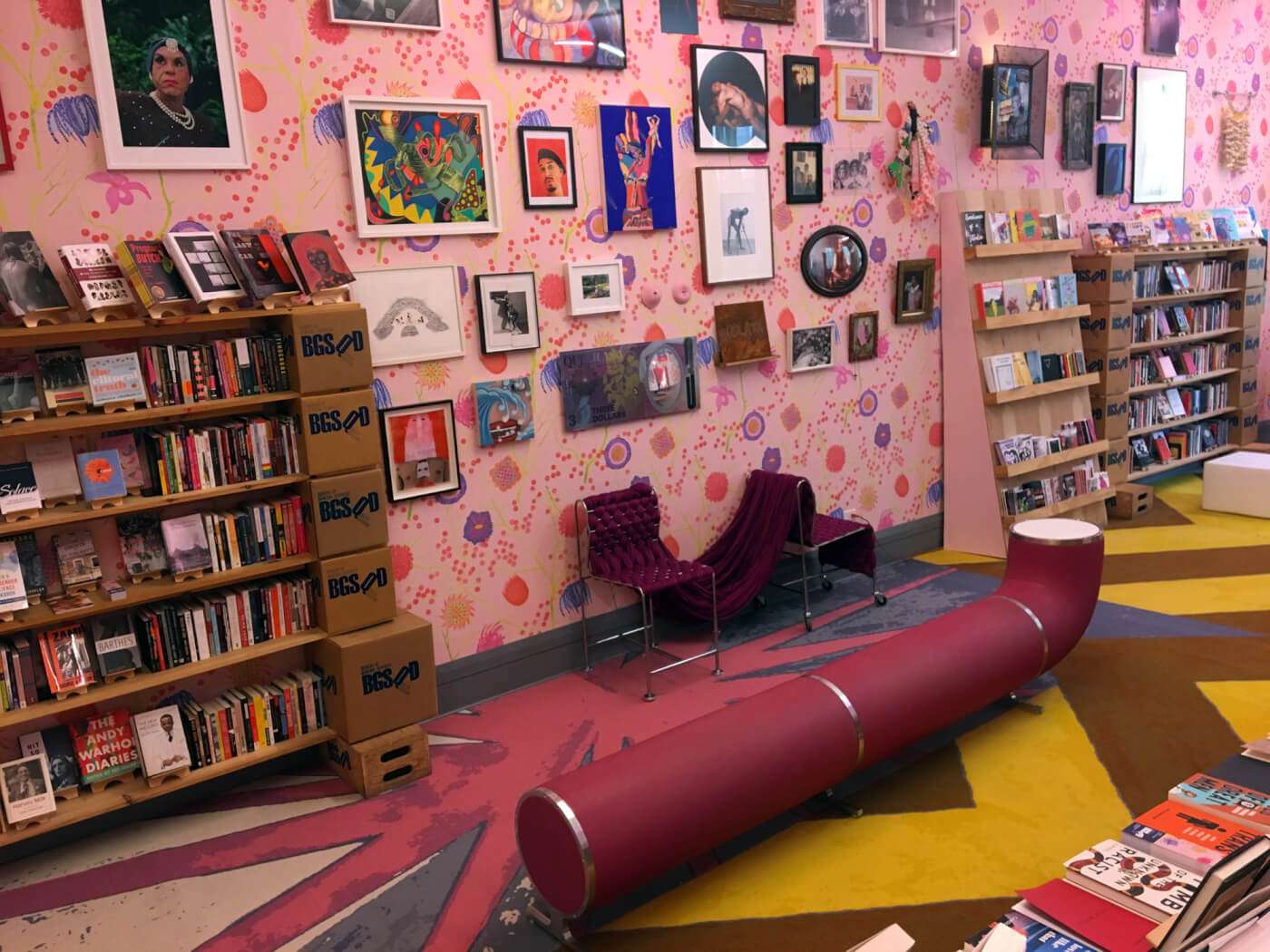 These individual works of art, while a lot to take in on their own, aren’t the only components of Cast of Characters. Collins also designed the wallpaper and “energy field” carpet, and curated a variety of funky, candy-colored pieces of furniture placed throughout the space. Predominantly chairs and seating, they include a soft bench in the shape of a giant pipe made by designer Harry Allen for design company Dune and two chairs “conjoined” by magenta yarn that Collins herself crafted.

The wallpaper (“Acid Rain Floral”) is a multifaceted depiction of the natural world, with an assortment of flowers and green branches on a light pink background accented with red dots. Those aren’t just for aesthetic purposes: the dots are taken from a graph published by The New York Times tracking Earth’s temperature from 1880 to 2017. Spoiler alert: it’s gotten hotter, to the extent that the Times declared 2017 to have “some of the highest average surface temperatures ever recorded.”

“I feel like we’re in this weird, surreal, fragile time and it’s this combination of things that are in the front of my mind: environmental precarity, and love of humanity, and kinship, and idols, and creativity,” Collins says. “So it just feels like it all needs to be in the same room.”

Liz Collins’s Cast of Characters is on view through September 16 at the Bureau of General Services—Queer Division, located at room 210 within the LGBT Center, 208 West 13th Street in New York City.