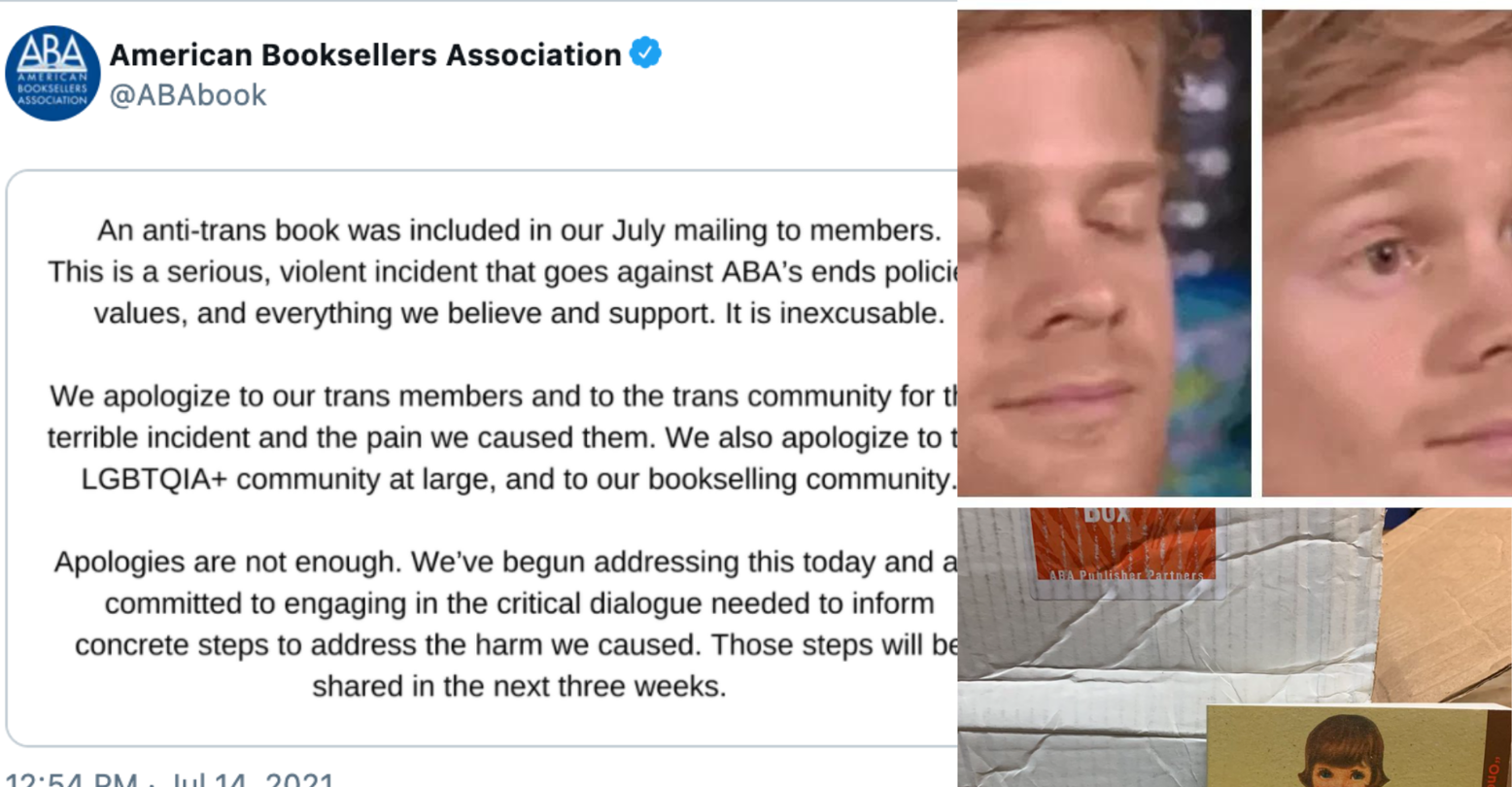 Yesterday, the American Booksellers Association issued an apology statement on Twitter. Who were they apologizing to and why, you ask? Well, they were explaining that somehow, someone somewhere slipped the anti-trans tract “Irreversible Damage” into their July selections for members.

If you don’t remember the “Irreversible Damage” drama, here’s the TL;DR: Last year, author Abigail Shrier released the book to widespread protest. By its very nature, “Irreversible Damage,”—which is chock full of bad science, inaccurate or barely-there data, and general fearmongering—is an anti-trans treatise that exists to create fear in the heart of parents everywhere whose kids have maybe expressed that their assigned gender doesn’t feel right to them. Shrier’s book specifically went after trans guys and nonbinary AFABs, positioning transness as a kind of enemy of womanhood and claiming that the “transgender craze” is actively ruining the lives of people who may, at some point in the future, detransition. Trans activists fought to pull the book from public libraries and bookstores, with some success. Amazon recalled the book, then reversed their decision. Almost a year after the initial release, we’re somehow still trying to explain to the world that “Irreversible Damage” isn’t just a harmless opposing opinion. It’s a collection of cis fears and hysteria surrounding what some parents still view as the “problem” of having a trans kid.

So when the ABA slipped it into their July offerings and then offered a too-little-too-late apology, trans folks weren’t exactly satisfied.

Trans writers and activists were quick to point out the lack of responsibility taken and passive language favored in the ABA statement.

Others were absolutely gobsmacked at the sheer audacity on display:

what the fuck
WHAT THE FUCK https://t.co/oYRuYi0wFq

Hey guys I tripped fell and accidentally shipped every indie bookstore in America a copy of Mein Kampf complete with a handwritten note about how it’s an amazing book everyone should read. No clue how this happened just a big oopsie.

Yeup. And the ABA released a…well the first sentence is in passive voice, so hard to call it an apology.

Thankfully, there is still some good in the world, and it helps to be reminded of that. Several booksellers took the opportunity to share recommendations for work by actual trans authors who haven’t made up all their data in an attempt to self-martyr:

Today is a great day to visit your local bookstore and pick up one of the *many* amazing new books written by trans authors, any of which would have made a great July selection for ABA members. https://t.co/c9GwPBHMqn

Some folks were nice enough to offer an example of what a real apology would look like:

“We did something inexcusable.

“We will never promote this author or this imprint again.

“We will donate an amount equal to what we got, out of our own pockets, to a trans advocacy group chosen by a panel of trans booksellers we will pay to review potential recipients.”

While many simply saw the news and logged off for the day, rightfully so.

Ah. I see That Book About The Evil Trans Contagion is trending on here after the ABA defecated in the center of the bed, yesterday.

Time to eject from this hellsite for the day. pic.twitter.com/XMFkdRLTM1

It’s all a big transphobic mess, capped off by a non-apology.

Every day is truly a winding road.