A giant trapezoid of white sheet, lit in flowing twilight blue and orange sherbet, hangs from the fly to enclose a square platform in the center of the set. Is it a bed?

We think so, as we catch the sneakers, button-downs, and other pieces of stylish men’s clothing scattered about the glass tile floor of the space, the fluorescent details of which stick out in blacklight. Incandescent candelabra globes line the walls like fireflies. The space itself is outlined in black wireframe beams, which end at catty-cornered wireframe doorsa diorama. 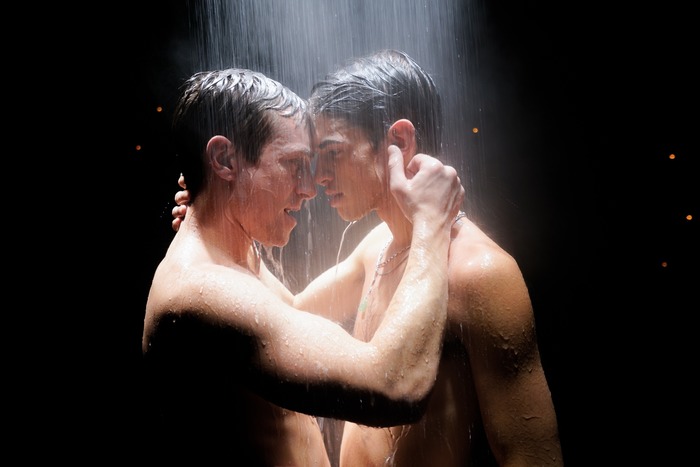 Word-of-mouth suggests that S. Asher Gelman’s Afterglow is a play about nudity, gay male bodies, and open relationshipsits title and design imply that it is a meditation on endings and illumination.

Josh and Alex, played by Brandon Haagenson and Joe Chisholm, respectively, are a wealthy, white, married gay couple in their mid-30s living in New York City. Josh is a casting director currently in the midst of casting a production of A Midsummer Night’s Dream, and Alex is a postgraduate researcher in chemistry. They’ve just finished playing together with Darius, a 25-year-old poor, white massage therapist played by David Merten.

As Alex goes off to shower, Josh intimates to Darius that he and Alex are pregnant with their first child through a surrogate. Alex returns and we learn that the news of the pregnancy was supposed to have remained secret. Though Josh and Alex have been in an open relationship for some time, and maintain sexualbut not romanticfriendships with other men, this breach of agreement between the two is a first. We sense that the rift has been a long time comingtheir marital squabbles, following Darius’s exit, about who will do what part of the laundry and how to properly wipe lube off the edge of the bed, reveal two men who are well past “happily ever after,” though they seem not to know it. The action of the play follows the widening of this breach as all three men struggle to hold onto their received beliefs about love as the real complexities of human relationships precipitate an inevitable, shared, existential breakdown.

In this way, Afterglow makes a powerful case for the untenability of gay male relationships founded on the bedrock of platitudinous heteronormativity, steeped in the mores of consumerist body politics, and formed as “you and me against the world.”

No external characters bring stakes to the escalating conflict. We hear about Josh’s mother, who is involved in helping plan the baby shower; Josh speaks to someone on the phone about the casting of Midsummer; we learn nothing about the surrogate; there is a fetus, to whom they refer as various fruits and vegetables throughout the play; in the abstract, we understand that Josh and Alex maintain sexual friendships. Darius seems to have nobody except his family back home and “clients.” Our three men are alone in their dramatic landscape. 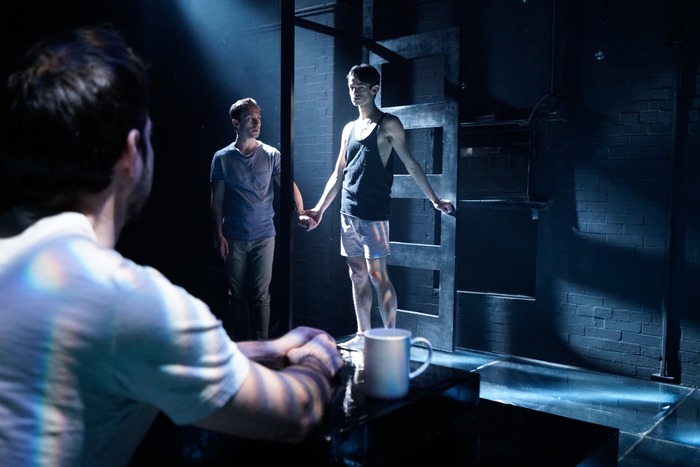 Unfortunately, this is the emotional and relational reality for many rich white men whohaving achieved the consumerist pre-2011 dream of money-is-no-object, “husband dick”-having gay marriage set apart in Hell’s Kitchen penthouses away from their less affluent, non-white peersare consequently bereft of the perspectives, criticisms, and authentic connections that might introduce alternatives to their sociopathic consumption of each other, such as the genuine support of loving friends and family, a reading of The Ethical Slut, or therapy. Any gay man who has survived having been made the ersatz third and couples’ counselor to a codependent, older gay couple is likely to hurt for Darius and relish the schadenfreude wrought by Josh and Alex’s tedious lack of self-awareness, as the dynamic enacted by these three men is painstakingly true to life.

But it isn’t just Josh, Alex, and Darius who are implicated in Afterglow’s critique of uncritical gay consumerism, it’s us. After all, we saw the handsome actors’ faces and bare shoulders in marketing materials and risked $79.50 and a night out on this playwright-director’s first play in the hopes of seeing their penises and fastidiously shaved balls. Or maybe that was just me.

What are the consequences of trying to live in the oxytocin highthe afterglowthat comes after both lovemaking and theatergoing? Afterglow would seem to indicate that the consequences for the former are catastrophicperhaps, then, we can assume the same for the latter. I can’t imagine that the piece wants me to perpetually carry around the painful nostalgia with which I left the theater, nor the perspective that open relationships always end in heartbreak. To do so would most certainly affect a catastrophe with regard to the many loving, emotionally and sexually fulfilling open relationships I’ve encountered as a queer, poor, white man in New York City.

With those consequences in mind, what are our responsibilities as participants? In the case of Afterglow, I believe our responsibility is to take radical ownership of our participation in the play as voyeurs and make the conscious choice not to enter the circle jerk of entitlement enacted by the characters on stage who serve as the authors of their own narcissistic demise. If we see ourselves in them, we need to understand that our recognition is an indictment and an exhortation to change, not a mere celebration of gay representation on stage. 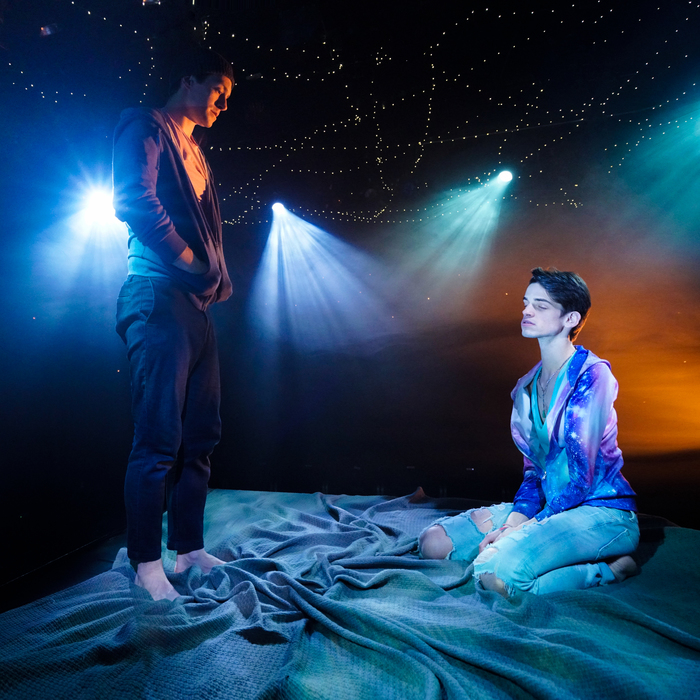 Afterglow relies on the audience to show up ready to do the workit leaves us in the dark at the end to supply our own illumination. As an audience member, I wanted the play to give me a map out of my own ideological prisons, which I now feel would have been akin to a kind of spoon-feeding. If I’ve made personal progress in my own life in ways these characters haven’t yet, it’s because I’ve had to meet the discomfort and not-knowing that come from tragedy, not sidestep it by way of a piece of art that tells me the solution.

In a way, Afterglow is a masterful bait-and-switchcome for the cocks, stay for the character development you’ll have to doin solitudeonce the play is over.

Joe Chisholm, Brandon Haagenson, and David Merten are to be commended for their accurate performances of gay men trapped in a toxic triangle, and for doing it in the vulnerable space of nudity. As a cubby queer man who keeps natural pubes and body hair, I applaud them for what must be a herculean daily effort at staying trim and trimmed. And, for what it’s worth, their penises are very nice to look at.

Ann Beyersdorfer lives up to her self-described role as “scenic storyteller” with a modular unit set that tells the story of a psychological space that can only use and reconfigure the tools available to it, in successful tandem with the action of the play. Jamie Kaufman’s lighting concept complements Beyersdorfer’s set with a color story that conveys twilight, dotted with candelabra fireflies and stars, creating the liminal quality of the play’s temporal space beautifully. Alex Dietz-Kest’s sound design lends a hypnotic, “we’ve been here before and we’ll be here again” vibe with a loopy trip hop score and notes of Robyn and Sigur Rós to hint that the perspective of the play is a little older and wiser but still hip. Fabian Fidel Aguilar’s costumes use the bipolarity of black and white to highlight the characters’ inflexibility, and the colorful pieces situated the men in a precise and immediately recognizable time and place. S. Asher Gelman’s direction pulls the design elements together in service of his vision nicely, and the choreographed scene transitions were a particularly lovely touch.

I wonder if the critique offered by Afterglow would have been aided by the addition of female characters, trans actors, actors with disabilities, or actors of color, or if its addition to the cultural conversation depends on implicating white gay cis men for their specific role in propagating a culture of invisibility around the bodies of women, trans people, people with disabilities, and people of color. Go see for yourself.