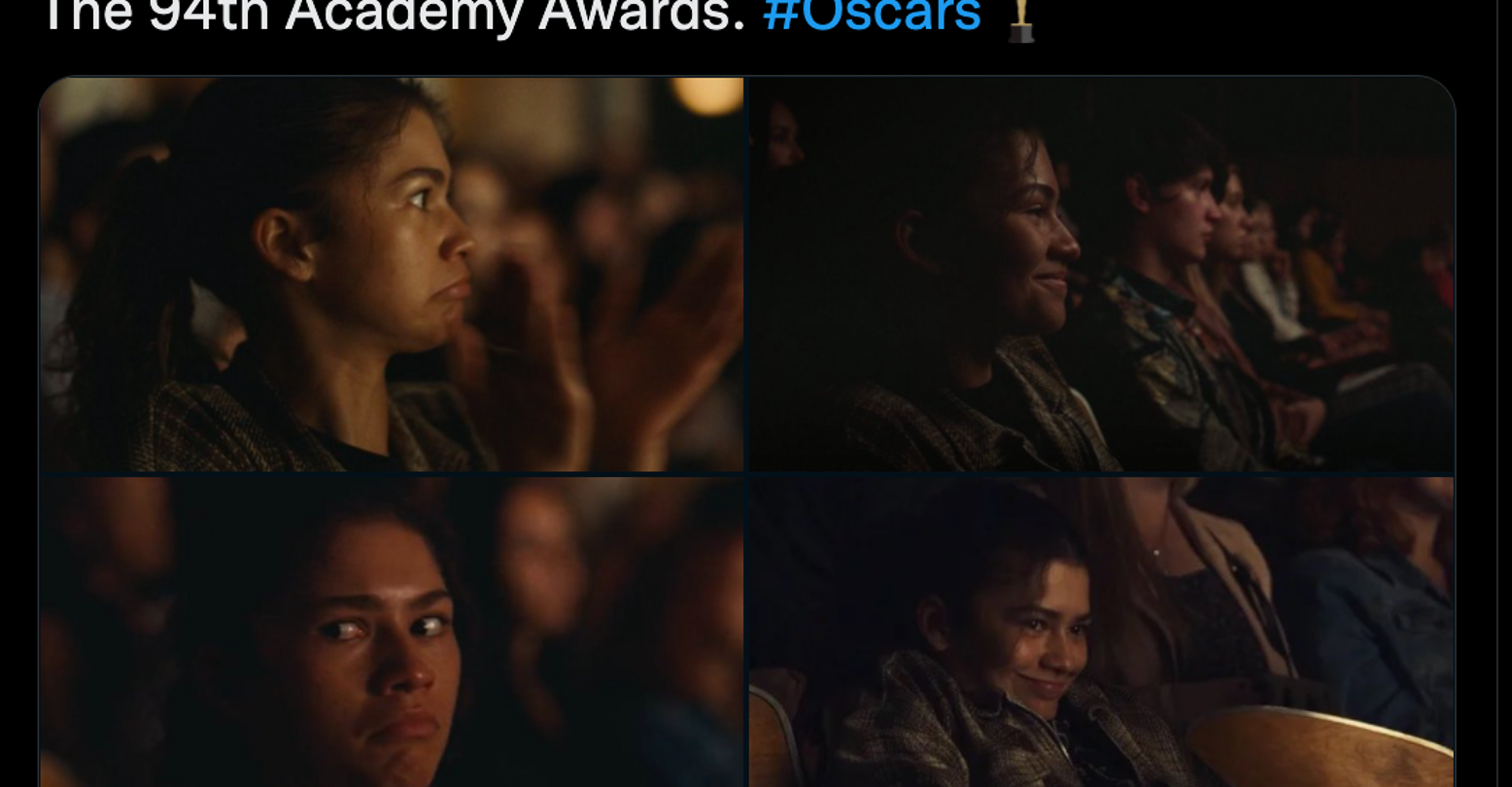 Well, if you were like millions of viewers last night who were watching the 2022 Oscars, then you probably displayed as many emotions as most of the Best Picture nominees.

I need every camera angle on EVERYONE pic.twitter.com/S1rVyut6R9

And if you had Twitter open, then you were probably equally entertained by all of the reactions from yesterday’s ceremony as well. From taking a stand against anti-LGBTQ+ legislation to the first openly queer woman of color winning best supporting actress, and of course the slap heard around the world, here’s your queer round up of the 2022 Oscars, courtesy of the Internet.

Many were serving red carpet lewks, like Timothee Chalamet, Ariana DeBose, Kristen Stewart, and Zendaya who came to slay.

PSA: Timothée Chalamet is not wearing a shirt at the #Oscars. pic.twitter.com/dOdX9Cy0UK

Yes, I would risk it all for Ariana DeBose‼️ ♥️ pic.twitter.com/iAdimQ0lWa

Ugh we love a reference. Thank God for Law Roach and his absolute meticulous knowledge in costume history Zendaya at the Oscars channeling 90’s Sharon Stone at the Oscars in her GAP dress shirt pic.twitter.com/4MPRCN0cp0

Regina Hall, Wanda Sykes, and Amy Schumer were the trio hosting the awards ceremony last night. And while the jokes were plentiful, so was the advocacy

Unfortunately, several of the awards would not be televised that night, including some iconic wins – like Riz Ahmed taking home his first win

I’m furious that Riz Ahmed is not giving his speech on live tv in front of the world. This is f*cked up. https://t.co/3TIXPbGiOx

But for the rest of the ceremony that was televised, it became clear that the night would be very queer.

Ariana DeBose took home the Best Supporting Actress award, becoming the first openly queer woman of color to do so

Rita Moreno watching Ariana DeBose accept an Oscar for the same role she won for in West Side Story 50 years ago… iconic pic.twitter.com/jicD4V6GWM

After winning the award for Best Actress, Jessica Chastain took her acceptance speech time to advocate for LGBTQ+ folks and mental health

The way #JessicaChastain dedicated her speech to queer folk, mental health, compassion, and love. That is a true Queen. #Oscars pic.twitter.com/dExXJk928r

We even had a Juno reunion with Elliot Page center stage.

The one in the middle is a giant.

Centering Elliot Page’s voice at the #Oscars sends a powerful message of love and acceptance to trans youth at a time when they are being singled out and their families persecuted. Bravo. pic.twitter.com/9iplFx9Vjj

Of course the Oscars wouldn’t be the same without a few performances. Beyonce opened up the ceremony with an electric performance of her Oscar-nominated song “Be Alive”

Although Stephanie Beatriz and the rest of her Encanto castmates may not talk about Bruno, they will sing about him.

STEPHANIE BEATRIZ PERFORMING AT THE OSCARS !! THATS !! MY !! GIRL !! pic.twitter.com/H86A60pEgO

.@BillieEilish delivers a flawless performance of “No Time To Die“ at the #Oscars.pic.twitter.com/A76PGy7ZQx

“omg was that scripted” “i literally dont know” pic.twitter.com/56W9eVrX0L

This is Lexi’s play! #Oscars pic.twitter.com/geylvpDHzX

And while we don’t condone violence, we did take notice of the double standard at play.

Y’all literally give awards to rapists and pedophiles—pls be serious https://t.co/JyZeNoaS2t

Dave chapelle. You are on notice.

Say what you want, but at least the 2022 Oscars were very queer and very interesting.