Ever since Rod Thomas first stepped away from his sleepy Welsh hometown and released his debut single in 2010, Bright Light Bright Light has won over fans and critics alike with his unique brand of shiny electropop. Since then, the independent singer/songwriter has toured with his friends Elton John and the Scissor Sisters, as well as starting his own dance party in New York called Romy & Michele’s Saturday Afternoon Tea Dance.

INTO spoke with Bright Light Bright Light about his new EP, Tough Love, the influence cinema has on his music and what it’s like to be labeled as a “gay artist.” Along the way, we also discussed Deadpool 3, RuPaul’s Drag Race, and his undying adoration for actress Catherine O’Hara. 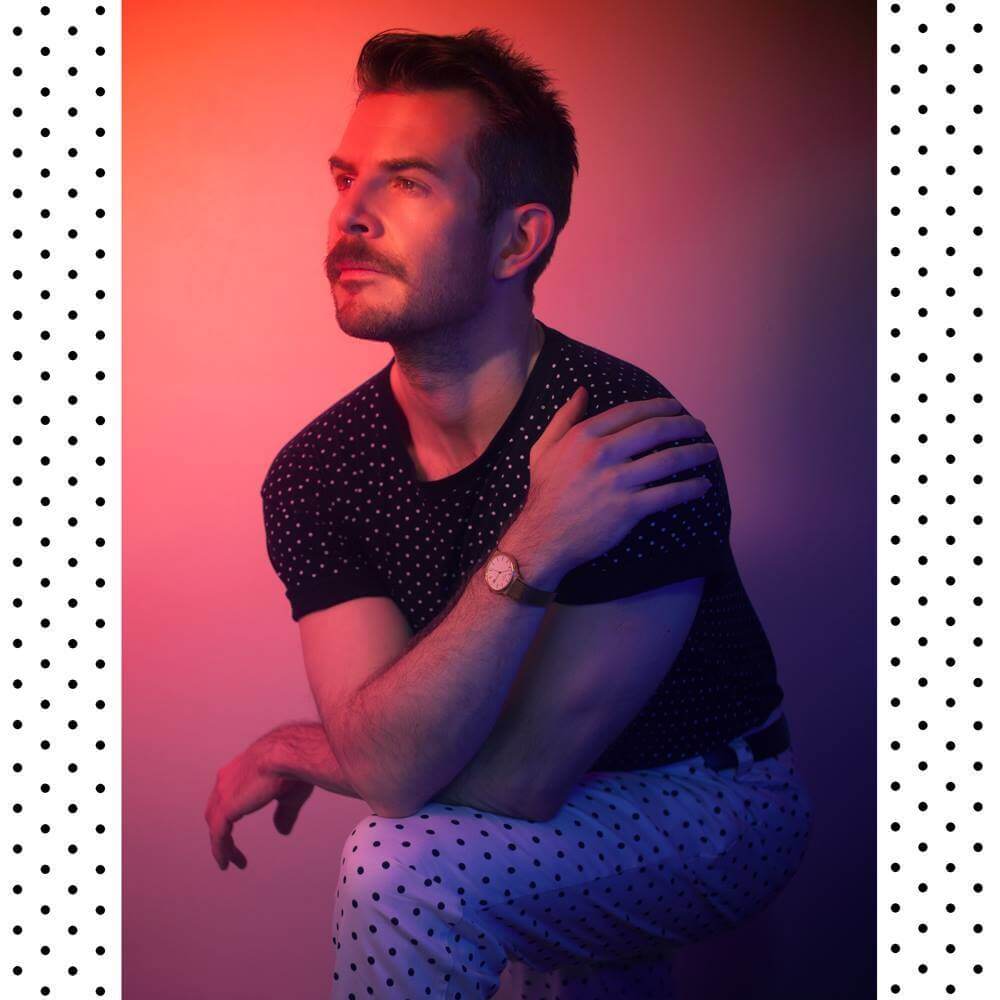 I read in an interview once that you often make mood boards to help inspire you while developing your songs. What kind of things ended up on your latest mood boards for Tough Love and what influenced the making of the EP as a whole?

I do indeed! Lots of highlighter pens, cutouts, and spreadsheets with visual references. For this EP, the visual scheme is inspired by Bette Midler’s outfit in Big Business. I love that film so much. Thematically, it moves on from the cinema references of Choreography and looks at the idea of self-care and looking after yourself.

The discussion about mental health is becoming much more common of late, thankfully, and I lost a friend to suicide this year, so I wanted the EP to look at happiness, balance and what you can do to keep the balance in check. So it’s a less jovial tone overall, but also with self-care and balance comes the moments of happiness and fun which “How I Feel” and “Uh Huh!” deal with, as opposed to the title track, which is about getting rid of the negative energy.

The EP includes a range of moods that vary from the euphoria of “Uh Huh” to melancholy in songs like the title track. What kind of music do you enjoy performing most live on stage?

I love the range, really, so it’s good to have the upbeat ones like “Uh Huh”, “All In The Name” and “I Believe” alongside moodier tracks like “Tough Love,” “Moves,” or “In Your Care.” I like building an arc with the live set and making a story with the different setlists. I love having fun at the shows, so there’s always an added energy even if it’s just from a ridiculous anecdote that comes from before the song. Some fans have listed the shows as their favorite stand up sets, hilariously.

I know it must be hard to choose, but do you have a favourite song off this latest project or at least one in particular that resonates with you most?

You do such a great job of intertwining visuals with your music, so it’s hard to look back on some of your biggest songs without also thinking about the videos that accompanied them. Are there any plans to shoot a promo for one of the new songs from Tough Love?

Thank you! Sadly not for this EP. I’m totally independent and this time around, there’s just not the budget for it. Which is a shame as I’m a really visual artist. I always think of colors, images, and videos when I’m writing the songs, but this time around, the video side didn’t work out. But next album? 100 percent.

Artists often strip down their uptempo numbers, so I find it really interesting that you decided to transform two of the slower tracks off the new EP into dance mixes. Can you talk me through this process?

I DJ a lot and I love the Tea Dance parties that I run where I spin lots of old disco records. It’s been a big way of connecting with the fans over the last year or so, so I thought it would be an interesting exercise to do “disco” versions of the slower tracks to make them fit into the kind of set I’d play. Lots of my friends DJ, too, so I wanted something floor-friendly that they could have, and it’s always fun to play around with the character of the song, you know? It’s exciting to see what different sides of the lyrics you can tease out with different arrangements.

Eighties influences pulsate throughout the EP. Do you consciously look back to this decade for inspiration or do these influences emerge because some of your biggest inspirations are ’80s icons?

God, I don’t know. I think at this point it’s pretty ingrained as ’80s/’90s pop culture was my way to see the world outside of my sleepy Welsh coal mining valley. The films, the radio, the magazines — all of those things let me see what I didn’t have on my doorstep and taught me to dream big.

The films particularly, with all of the neon, the colour, the wacky storylines that more child-friendly movies had… I love that decade. And going back and mining the archives for forgotten films is so much fun, and always sparks new ideas. Plus, the 80s also had key moments for so many powerhouse vocalists: Aretha, George Michael, Whitney, Elton, Martha Wash, Grace Jones, Kate Bush… 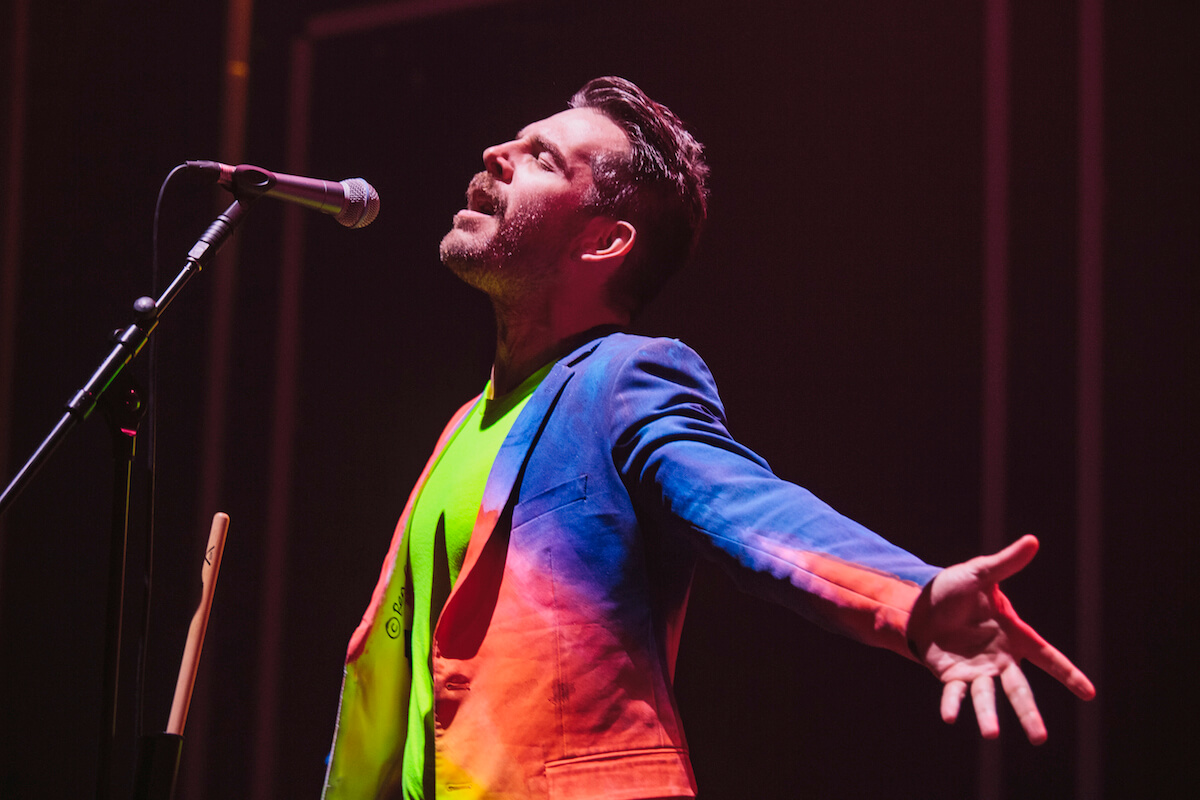 As you’ve just mentioned, your love of cinema is well documented. If any songs from the new EP could be used to soundtrack a scene from any movie, what would it be and why?

I’d love “Uh Huh!” to be used for a scene in Deadpool 3 where he leaves a villain maimed in pain, and minces away looking really fly, ready to do some other insane stunt and show everyone that he doesn’t GAF and is going to win the day (with the usual errors) no matter what, feeling super happy with himself. I LOVE the Deadpool franchise, it’s so goddamn funny.

You describe yourself as a Catherine O’Hara enthusiast on your website. Same. What is it about her that resonates with you so much?

ERY. THING. I think the woman is an utter genius. All of her roles have been immaculately played, from Christopher Guest films like Waiting For Guffman to Beetlejuice, Home Alone, and of course the UTTERLY ICONIC MOIRA ROSE in Schitt’s Creek. Her performance in this series deserves its own award. What a woman. The deadpan humour and brutal directness is so harsh, but you still root for and love every single deluded character.

Openly queer singers like Troye Sivan and Hayley Kiyoko are finding more success in the mainstream than ever before. How do you feel about being described as a gay or LGBTQIA+ artist? Are such labels helpful or do you find them restrictive?

I don’t know — it’s a funny question, isn’t it? I do feel very proud when we’re all talked about in the same sentence. There’s definitely a bonus in people making a point that there are LGBTQIA+ artists making excellent work, but there are also times where it feels as limiting as “female drummer,” “black actor” or “single person” where you’re like “OK, why does that adjective need to be there? What’s the purpose?” I think there are absolutely times where it’s there to make a point for the better, but it’s not always necessary. Tricky matter. Then again, I am a gay man, so if you feel like pointing out the obvious, fine.

Who are you listening to right now? Are there are any rising stars out there who you feel deserve more attention?

I love Shura, Christine & The Queens (or Chris), LEADR, MUNA and James Yuill. But I’m also constantly listening to the Pointer Sisters, Bette Midler, and Mariah Carey’s back catalogue because, as I already mentioned, I am a gay man and I can never shake those inescapable arrangements. God, The Divine Miss M I play at least once a week (underestimating for the illusion of variety in my life).

I’ve read a lot about your friendship with Elton John and love your collaborations together. What do you think about his recent forays into hip-hop? Would you ever be interested in experimenting with the genre or working with other artists from that field?

I think Elton’s awesome for always trying new things. His music taste is so varied. When we hang out, we’re always listening to such a diverse range of music. We’ve had dinners where it’ll go from Bizarre Inc to Fleetwood Mac and everything in between in one hour. He’s just the biggest music fan who loves all genres. I’m TOTALLY up for experimenting in genre and collaboration, which is what I’m hoping to explore much more with album four. 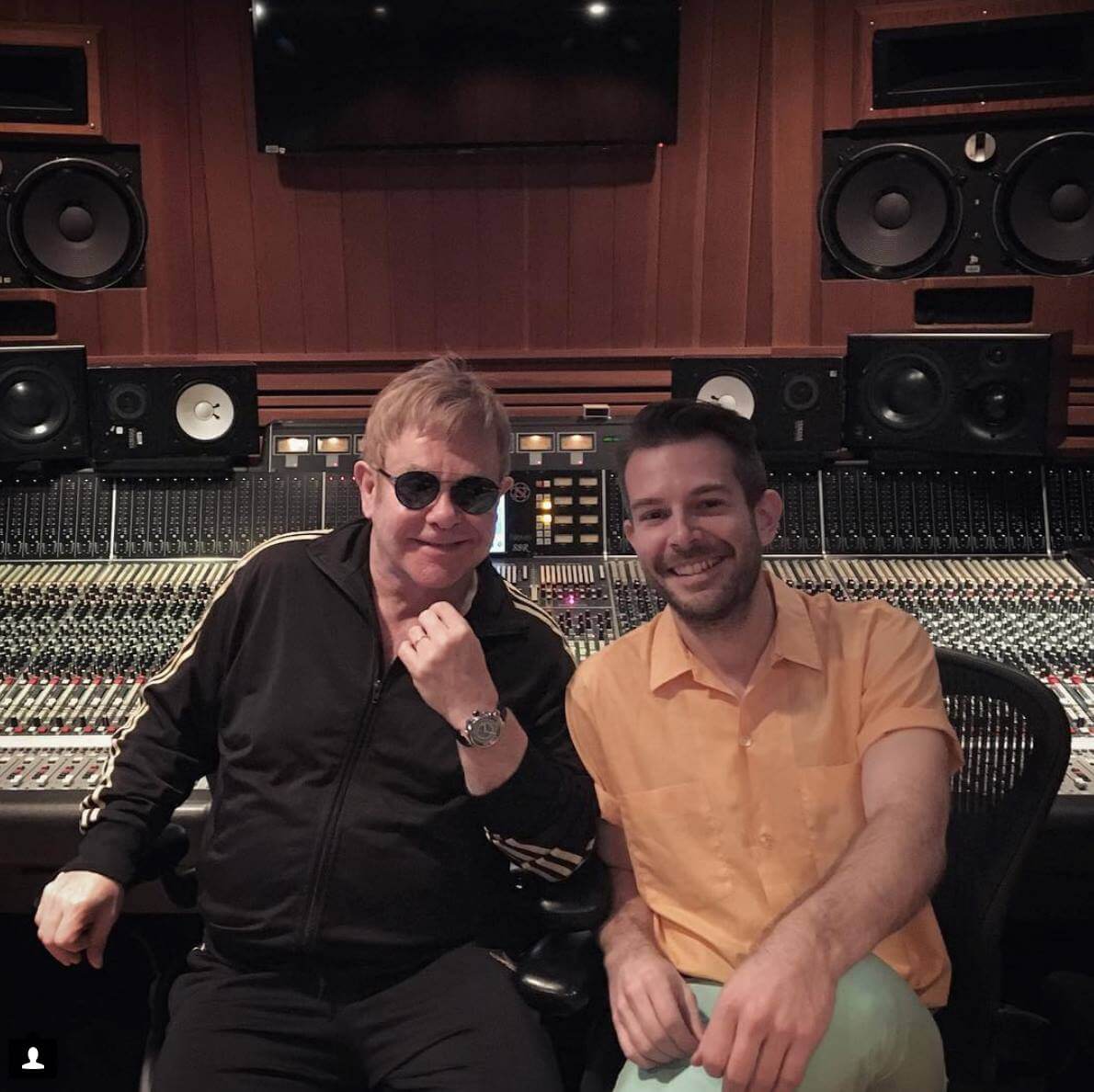 One of my favorite videos of yours was the one you filmed with Ana Matronic for “I Only Want To Please You” and the drag references slayed me. Do you watch RuPaul’s Drag Race and if so, what do you think of the show right now following the controversy of Season 10 and All Stars Season 3?

I AM OBSESSED WITH THAT SHOW. When I was watching the finale of Season 10 and *that butterfly moment* happened, people in the bar started taking photos of my reaction. I just couldn’t BELIEVE what was happening. I’ve never seen a strong contestant undo all their hard work in one fell swoop… it was WILD.

I have to say I was super unhappy about the end of All Stars 3 as it took away from the winner. The strongest competitor statistically wasn’t allowed to compete for the final step to the crown, and that really sucked. It kind of ruined it for all four of the finalists I think, and made for a very uneasy final few minutes. I don’t think Ru predicted that, who knows, but it definitely made me pretty unhappy.

BUT, the show is genius and has had, in spite of that, so many wonderful moments that make me laugh, cry, rejoice and break down, I think it’s an INCREDIBLE show and whether or not it resolves some of the issues raised – The Vixen, for example – it opens up public discussion and opens some minds to things often not previously considered.

You’ve achieved a huge amount in your career already. Out of everything you’ve accomplished, what are you most proud of?

When I got to play the Graham Norton BBC One TV show with Sir Elton John as my guest, I felt so utterly proud. I could never dream that would happen — how insane! Before I released my first single as Bright Light Bright Light, a booking agent in the UK — an older white straight man, it might shock you — told my agent at the time that she needed to drop me to be taken seriously because I was an embarrassment, and then I became the first unsigned artist to ever play on that show. I feel so proud that I proved him wrong, and worked with my absolute hero on a TV screen in front of all those people — wearing a mint green suit. 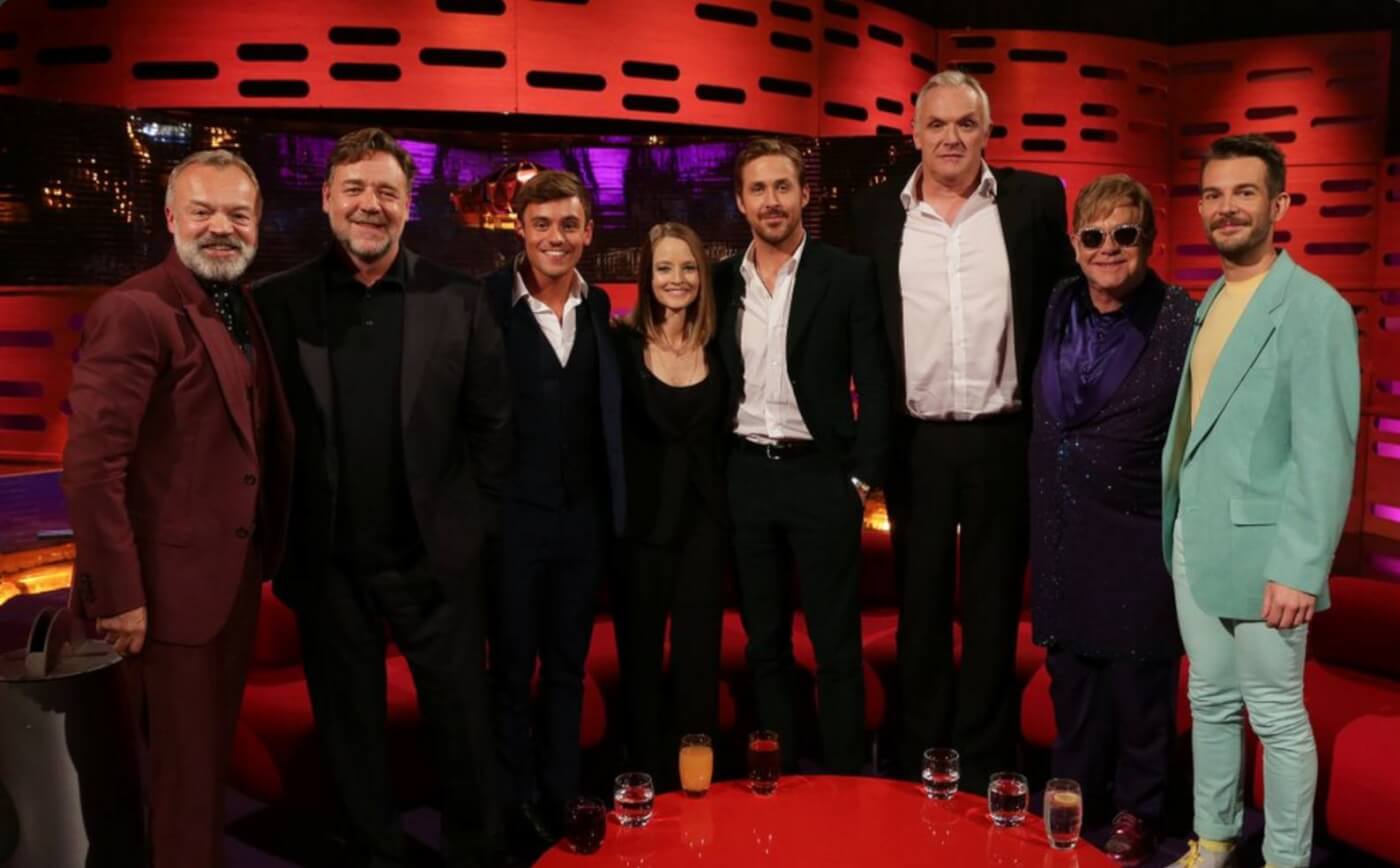 What’s next for Bright Light Bright Light? You recently appeared in The League Of Gentlemen — would you consider more acting or perhaps even scoring a film one day?

Yes. Film scoring is my long-term goal. I’m desperate to get into that world. I’ve been on the film panel at a few film festivals in the last year or two — Inside Out in Toronto and Iris Prize in Cardiff. Film is such a huge passion of mine, [and] I’m really excited to get the chance to combine my music and love of film. Speaking of The League Of Gentlemen, I composed the music for Mark Gatiss’ BBC 4 series Queers. He’s one of the main people in TLOG. So that’s my first step into music for motion picture, technically! So much fun.