It’s been over a decade since a young Chris Crocker first told the world to “Leave Britney alone” and much has changed in the interim. While the global LGBTQ community has faced a huge number of triumphs and setbacks in the past 10 years, visibility in the media is generally better than ever before. While we still have a long way to go before equality is won, the way that queer people are treated online is worlds away from the abuse that Crocker endured back in 2007 for being both openly queer and unapologetically feminine in the spotlight.

Fast forward to 2018 and Crocker is proud to release his first full-length album which is simply titled Chris Crocker and represents a more personal take on the acoustic sound that he cultivated on his last EP, Walls Down. In anticipation of the upcoming music video for his song “One Way Street,” we talked to the Vlogger star about the record and discussed everything from sobriety and life after Britney to RuPaul’s Drag Race and his relationships with some of the show’s most seasoned queens. 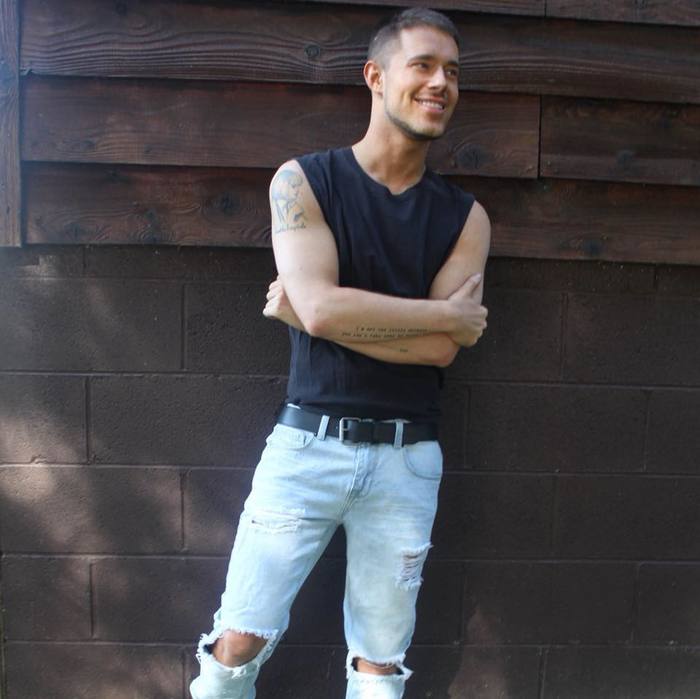 Congratulations on the new album! It’s great and seems to be getting a really positive response online.

Thank you! It’s crazy because for me, I’m primarily known for comedy and for being funny on the internet with my acting. I know a lot of people are going to be really resistant to my music because it’s so different. I didn’t really think about people hearing the record until it actually came out, and I was having panic attack after panic attack, like “Holy shit! This is real!” It’s really exciting!

I really enjoyed some of your earlier stuff, too, like “Freak of Nature.” Was it a conscious decision to move away from that style or was it more of a natural evolution?

I was 22 when I sang club songs like “Freak of Nature” I wanted to make music that I could listen to or that my friends could listen to before they go to the club. But now I’m 30. As I’ve written about on [Chris Crocker], I’ve had issues with drinking and going to the club and stuff. I’m definitely in a different place and I think the music reflects that because, personally, it would just feel insincere for me singing about wanting to have sex and drink now, ya know?

What are the biggest challenges you’ve faced as an unsigned artist?

The most difficult thing for me was that I’d write these songs and save them just on my phone, on my voice memo, but then I’d be like, okay, now it’s time to pay for production. So the biggest challenge was raising the money, selling T-shirts, selling merchandise. That’s the thing that’s frustrating, because people see me responding to these trolls who leave bad reviews or people who didn’t even listen to the album and it’s like, of course I’m going to defend something that I’ve spent my entire savings on, not to mention my emotions.

Can you talk me through the inspiration behind your song “Put The Drink Down”?

I started talking about my relationship with alcohol a little bit more last year on video blogs. I still have severe depression and anxiety. There are still those days when it’s like “I could really use a drink right now.” It’s not that I 100% have cut it out of my life. Even though I’m still struggling with that and not completely sober, I wanted to write about it because it was a recurring theme. The things you do to get rid of your problems become your new problems. Now you’re mad at yourself for making new mistakes that you’ve made. That’s what the song is about really, creating new problems for yourself when you think alcohol will solve them.

It’s great that you talk about these kind of issues so openly. Just recently, Mariah Carey discussed her bipolar disorder in an interview and I think getting these conversations out there is so key.

I agree with you. I think everyone should be able to talk about their mental health, but with [Carey] being such a huge pop star, I’m happy she can help normalize it and get rid of the stigma surrounding the way people that think about mental health.

The Britney video is what made you famous initially, but in the last 10 years, so much has changed. Do you think things are getting better for LGBTQ people? How have things changed for you?

I think in terms of there being acceptability online, absolutely things have gotten better. I really do. I still think there’s a lot of ignorance in the anonymous comments posted on YouTube and stuff, but when you look at the array of different LGBTQ YouTubers, and even pop performers like Troye Sivan, there’s a lot more that’s showcased now. Whereas in 2006/2007 when I started video blogging, it was kind of like the great unknown. You didn’t even know what you were entering when you uploaded a video and it was all this negativity. I was getting death threats. That’s why I had to go by a stage name. All these people were trying to figure out where my family live, they were calling my grandmother’s house phone. It was awful. So, I think the internet is in a much better place now.

Who would you like to collaborate with on music in the future? I know you’re friends with Adore Delano and her singing career is killing it right now too.

Adore and I are great friends, but we never talk about music, and I think that’s because when we talk, it’s not so much about our careers. It’s kind of an escape to not talk about those things. I don’t know if we’d ever do music together. I’m inspired by Carly Rae Jepsen’s music. I’m inspired by listening to Robyn. I’m inspired by singer songwriter females. I love all strong women.

Because of your friendship with Adore Delano and the way that you incorporate drag into your comedy performances, I’m fascinated to hear what your thoughts are on Rupaul’s Drag Race as a platform for drag culture.

I think the show is amazing, because when I look back on when I first came out, there was a lot of shame towards feminine gay men and it was very heteronormative. If you were going to be accepted among other gay men, you had to be an Anderson Cooper type or very masculine. What I love about RuPaul’s Drag Race is that I look around at club viewing parties sometimes, and all these guys who before were very ashamed of their femininity and very dismissive of this femininity in other men are now going around saying “Yes kween!” So what I think is amazing about the show as a whole is that it’s not only lessening the shame within men for their femininity, but it’s also opening the minds of people who had no idea about drag before.

Do you have a favorite queen currently competing on Season 10?

Every single season, there’s either someone I was friends with from when I was in LA or they’re from my hometown, like Eureka, for example. I also knew Aquaria a bit online before she got on and so no, I don’t like to pick favorites. I think they’re all amazing. I just like to sit back and be objective. You’ve got to stay neutral. If I say in an interview like “Oh this one is my favorite,” I’ll get a text like “Bitch!”

Would you ever want to be on RuPaul’s Drag Race in some capacity, perhaps as a guest judge?

I have a relationship with World of Wonder who does RuPaul’s Drag Race. I had a web series with them and I filmed a reality show with World of Wonder before Drag Race was on. My dream is for there to be a challenge on the showI need to pitch this to themwhere the queens have to create a viral video and I would be the judge.

Maybe you’ll see me next season!

What’s next for you in the future?

There’s going to be a remix EP, because the album is ‘80s, ‘90s inspired, but we also wanted to give a modern spin on that. I’m going to do a music video for “One Way Street” for sure, but as far as things that aren’t related to music, I would definitely love to do more TV, I would love be on RuPaul’s Drag Race and, once I finish with the album, I’ll go back to my comedy stuff.

Looking back, what are you most proud of in your career?

Honestly, and I’m not just saying this because it just came out, but this album is what I’m most proud of. It really truly is. Because I’m getting an opportunity to finally show who I am at 30 years old. I think when I look back at the past 10 years, whether it was a HBO documentary or the “Leave Britney Alone” video or even when I did porn, I was going through a lot of different things in my twenties with my mental health. There were a lot of ups and downs, but with this album, it’s a place for me to artistically express those things and just be who I am as a 30-year-old adult.