In August of 2014, DeRay Mckesson came into the national spotlight as a Black Lives Matter activist as he participated in, and documented, the Ferguson protests and the contemporary movement against police violence and mass incarceration.

Mckesson, now 33 years old, has since run for mayor of Baltimore, met with President Barack Obama at the White House, launched Campaign Zero (a policy platform to promote police reform), and hosted the Pod Save the People podcast from Crooked Media.

And now, Mckesson has written his first book, On the Other Side of Freedom: The Case for Hope. The book, out now, is written in essay style, combining McKesson’s personal reflections and stories with policy and strategy suggestions.

INTO spoke to Mckesson about intersectionality, his own sexuality, and the way it informs his activism. 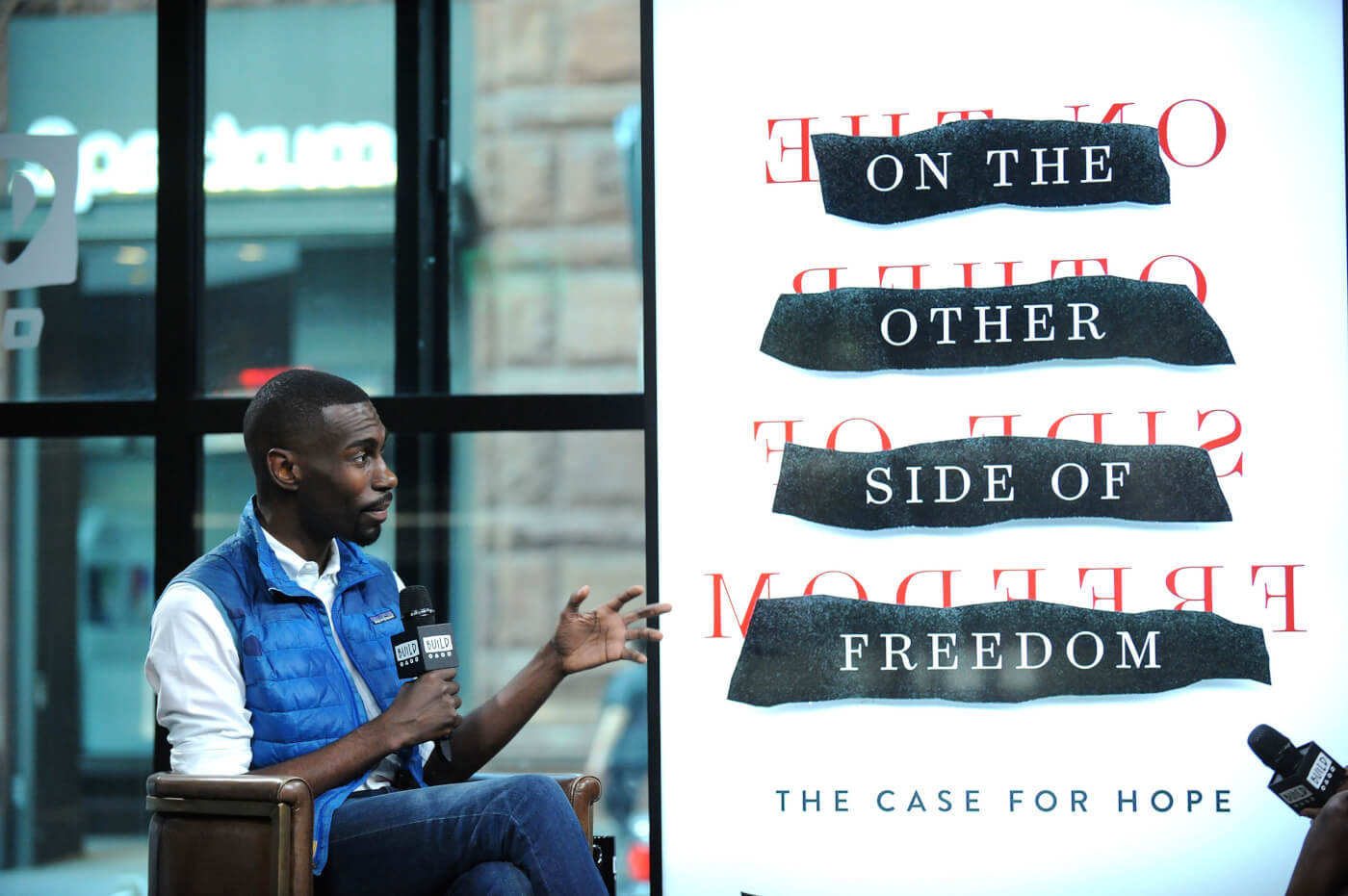 In the book, you have an essay, “Out of the Quiet,” that’s about your sexuality. Can you talk about the personal importance of writing that section?

That was important to me because I know that we show up as whole people in this work. I wanted to make sure that I was being really honest. So, I talk about love, and I talk about the way gay black men are treated like accessories or tropes, and what that looks like. It was really important to me to include this conversation in my essays.

Did writing this book require a different type of vulnerability than you need when you do your podcast, Pod Save the People, or give speeches and talks?

With this book, I really had to think about how I felt, and what that meant, and the message I was trying to get across. These are things that I thought about for a long time, I just never put pen to paper. It was hard.

In the essay, you talk about fighting for people who don’t necessarily want to fight alongside you. How do you power through those situations?

I wish it was easier. But, here’s the thing: The police can kill anybody.

So, I’m aware that there are some people who don’t personally like me for whatever reason. Whether someone doesn’t like me because they’re homophobic, or they’re racist, or if they just don’t like me for whatever reason, I still want them to get free. And that’s something I had to grapple with, this idea that as an activist so you still fight for people who sometimes are truly not interested in your own freedom.

But this work is not just about me. It’s about how we change the community. I also know that sometimes I’m not the best person to fight for you. I might not be the best person in that moment to help you think about the issue, or the right person to really challenge someone, or push them. I’m okay with that. We all have different entrances to this work, and I don’t need to be everyone’s entrance.

You write about how historical narratives of Civil Rights Movements are often centered around straight men. You also say the conversation is changing, and I’m curious to what do you attribute that change?

I think about being in the streets in St. Louis, and we didn’t have to be members of any group. We were just able to come out and do work. It was powerful. We didn’t have to be members of some good ol’ boys club who decided who got to lead a protest, or who got to be the person with this platform, or who got to speak in this moment. You really could do whatever you wanted, and you could do the work that you felt called to do.

That created a level of access and opportunity for people of all identities, in a way that was just hard before.

What are the different ways people can use confrontation to promote change?

In the book, I use an example where we were in the streets early in the Ferguson protests. A protestor came up and yelled “faggot” at an officer, and another protestor was like, “Hey, man, that offended me.” And the guy who had yelled it was like, “I’m sorry.”

I’ll never forget it. In this moment, I realized that something was different about where we were and what was happening.

It was a great reminder that confrontation doesn’t always have to look one way. He said it really simply. He was just like, “That offended me.” It wasn’t a big battle, and it wasn’t some big fight. It was just a statement. And it worked.

So often, when we think about all of this activism work, we see confrontation as very narrow. Sometimes it feels like the only way you’re really pushing is if you’re yelling, and if you’re animated, and if you’re emotional.

But, there are a million ways to be confrontational that we can employ.

So, when I was teaching, it was really different. I would ask really intense questions to get where I needed to go.

I’ve been to colleges where they’ve been protesting some of the racist right-wing speakers, and they’ve all stood up silently and turned their backs.

I want us to continue to be creative about the way we think about confrontation. 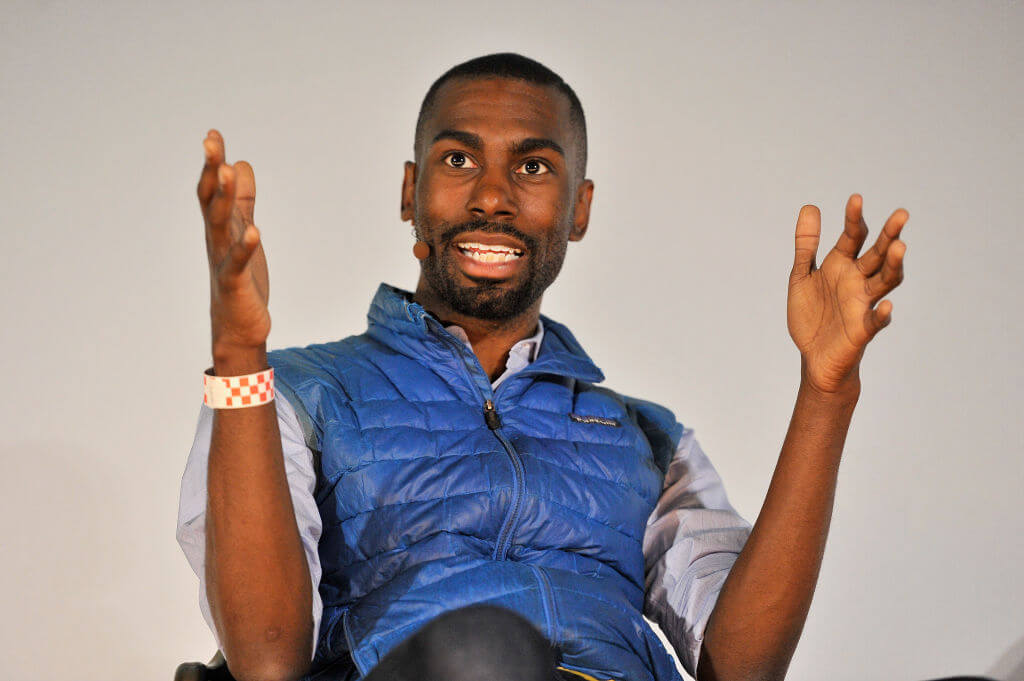 You also write about the erasure that happens when we don’t look at identities as being intersectional. Can you expand upon this?

We shouldn’t have to hide parts of who we are to show up in this work.

I wrote in the book that I’m black and gay all the time, and I always bring both of those identities. I might not be speaking about it in that way every time, but the identities are present, and the way I think about the world is definitely informed through those identities.

People might talk about the “gay agenda” superseding the “Black agenda,” for instance. That’s an attempt to invalidate people’s identities, and we can’t let people invalidate who we are.

People shouldn’t be oppressed. People should be free to lead healthy lives, and people should have access to opportunity. Those things are real across the board.

You mentioned how media perpetuates negative stereotypes about LGBTQ people of color. What are some ways that people who work in the media can challenge these stereotypical portrayals?

Call it out. Call it out every single time. Every time we see homophobia, we need to call it out and name it, so people aren’t being let off the hook.

We need allies to do it, too. We need straight men and women to call out homophobia, so it’s not only the burden of the LGBTQ community.

In Hollywood, we need to have more lead LGBTQ characters who lead more complex lives, the way LGBTQ people do in real life. It does no good when every single gay character is typecast as promiscuous, or these characters are based on tropes. LGBTQ characters should reflect the diverse range of people in the LGBTQ community. People shouldn’t have to go search out representations of themselves in the media. They should just be there already.

Do any shows or movies come to mind that have done a good of this?

Pose is really good in terms of presenting a range of people. I appreciate the range of identities shown, and the complexity of people’s lives. The characters are whole people, who are beautifully flawed, beautifully gifted, and well rounded.

Your book ultimately has such a message of hope and optimism. Did you go into writing knowing it would have that message?

I think about hope as belief that our tomorrows can be better than today. I often ask myself why I go to the street, and why are all these people running for office, and why I travel the country with all these activists.

I know it’s because of hope. I know today’s world is not the best version of the world, and I know we can do so much more than were currently doing.

That’s real, that’s where my heart is and what fuels my work.