“It is a period of civil war,” reads the opening crawl of the original Star Wars film. But this statement applies just as much to contemporary comic book culture as it does to the blockbuster sci-fi franchise.

Earlier this month, comic scribe Chuck Wendig, notable for introducing LGBTQ characters into Star Wars: Shadow of Vader, was fired by the series’ publisher Marvel. As of the writing of this article, Marvel has declined to articulate the reason for the termination, but according to Wendig’s Twitter, it was because of the ultraliberal views he expressed on social media.

“Today I got the call,” Wendig tweeted. “I’m fired. Because of the negativity and vulgarity that my tweets bring. Seriously, that’s what Mark, the editor said. It was too much politics, too much vulgarity, too much negativity on my part… I know it hands Comicsgate a big win. It will embolden them. But they won.”

So, here’s a thing that has happened – I just got fired from Marvel. Taken off issues 4 and 5 of SHADOW OF VADER, and taken off an as-yet-unannounced SW book.

This might be a long thread, so apologies in advance.

Comicsgate, the Alt-Right rejection of female, minority, and LGBTQ representation in comic books, serves as a microcosm of the current American political terrain. Just as The Force embodies both light and darkness, the United States is locked in a chiaroscuro struggle between xenophobic and progressive values.

Wendig’s firing can be attributed to the recent Twitter backlash following the writer’s heated denunciation of accused sexual assailant Brett Kavanaugh’s confirmation to the Supreme Court. Yet, he has been a longtime target of homophobic rage, ever since he introduced the openly gay character Sinjir Rath Velus into his novel Star Wars: Aftermath. By firing Wendig, Marvel is tacitly saying that the Alt-Right opinions of Comicsgate overshadow those of progressives. (INTO has reached out to Marvel for comment, but has received no response.)

“The movement as a whole is a threat to creators inasmuch as their publishers are cowards,” said Carta Monir, the trans writer on Secure Connect. “Comicsgate would lose much of its power if companies stopped trying to appease their worst and most hateful customers. Because of cowardice on the part of publishers, creators who don’t meet the standard of whiteness and maleness demanded by bigots regularly find themselves without the support of their company. Even white, male creators can find themselves at the mercy of bigots, like in the case of Chuck Wendig.”

One of Comicsgate’s primary justifications is that, as one angry comic book retailer put it, “black,” “homo,” and “freaking female” comics are ruining the comic book industry. Yet this opinion is easily refuted. According to an Atlantic article written by Asher Elbein, “contrary to the [Marvel Comic’s] claims, sales data showed that minority-led books were actually doing relatively well compared to books starring white male characters.”

“As a storyteller, as a reader, as a human being in 2018, I want stories to reflect the world I live in,” said Josh Trujillo, the openly gay writer of Love Machines and Declaration. “People want to see themselves in the type of media they consume because stories empower us.”

This sentiment is echoed by Trujillo’s contemporary Terry Blas, another openly gay comic creator behind Dead Weight and the upcoming Stonewall Prep.

“It’s important to include these voices simply because representation matters,” Blas told INTO. “If people can’t see themselves reflected back to them from shows and movies and books and comics, they have no way of being able to visualize their lives as smart or intelligent or brave or anything they never get portrayed as.”

LGBTQ representation in media, including comic books, is a literal matter of life and death. According to the Trevor Project, queer teens are five times more likely to commit suicide than their heterosexual counterparts. The importance of LGBTQ visibility is best evidenced by a letter published in an issue of Young Avengers, a comic book featuring openly gay boyfriends Wiccan and Hulkling:

“I got a frantic call from Florida. I packed quickly. Caught a flight. My sister and her husband were at their wit’s end. Their fifteen-year-old son, my nephew, had tried to commit suicide. A good kid, a bright one, and gay. He came so close… They thought of me. Also gay. But older. When I packed I threw in about a dozen comics. Among those dozen books, issues one through four of Young Avengers. During one of my catnaps, he had found and read them before I did. He woke me up. The look in his eyes. His eyes were so big! A comic, with teenagers, gay teenagers! In a comic! And I saw the hope…” 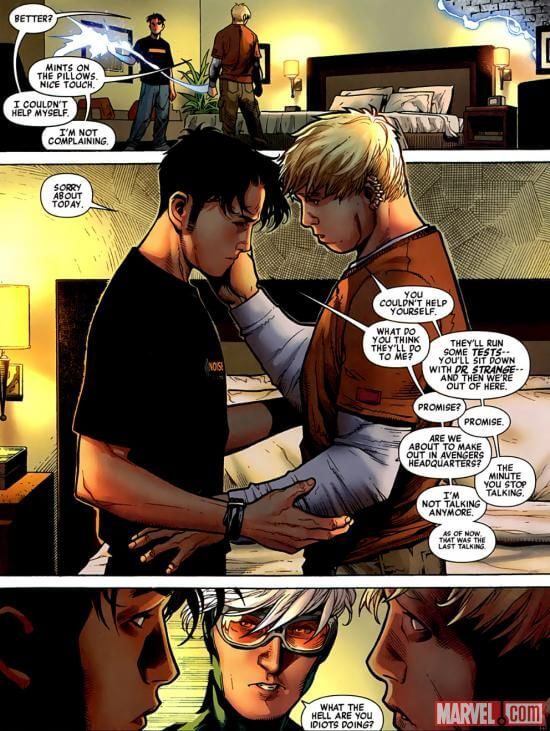 It’s worth mentioning that the rabid reaction to Wendig’s criticism of Kavanaugh was from a much smaller number of people than the amount of social media activity suggests. According to research by Bethany Lacina, an Associate Professor of Political Science at the University of Rochester, 20 percent of tweets about Wendig during the timeframe of the Kavanaugh controversy were bots, and 19 percent of the accounts posting were bots. In the case of this study, “bots” are defined as Twitter accounts that are fully automated. To break it down, one in every five anti-Wendig posts, as well as posters, weren’t real people.

In this respect, Comicsgate isn’t the evil Empire, an all-powerful  galaxy spanning juggernaut. Nor is it the Rebel Alliance, a ragtag team of underdogs fighting persecution, despite their perceived victimhood. No, Comicsgate is Jabba the Hutt: a slimy, frog-eating blob that cravenly sits in the comfort of its home while the real heroes battle on the frontline against the dark side of The Force.