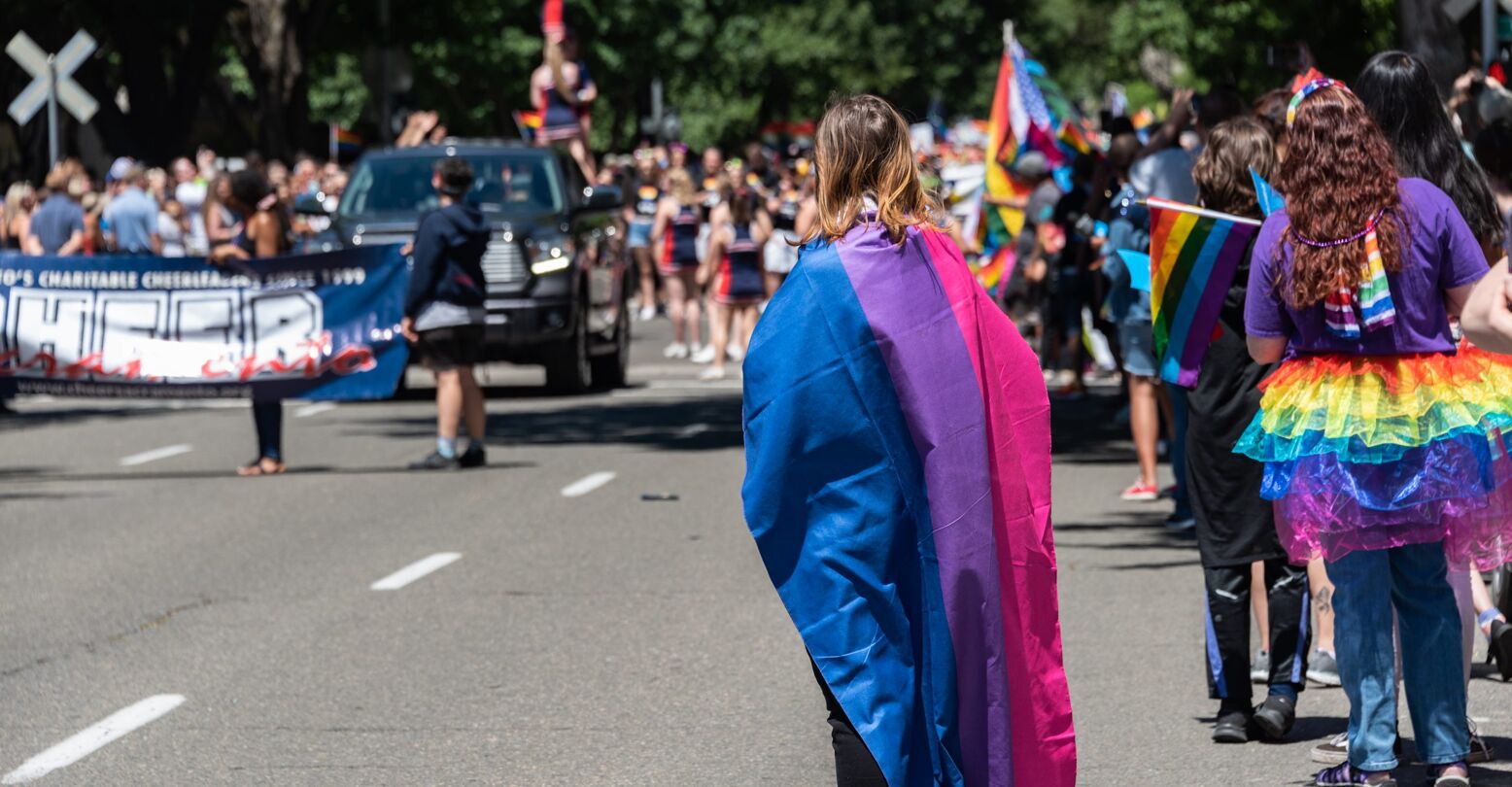 Time isn’t real; but with a set annual date of September 23rd, Bi Visibility Day is the perfect reason to believe in the calendar year. Considering the holiday only comes around once every 365, it’s not often we get a whole day reserved to celebrate the LGBT+ community’s beloved, but oft-ignored, “B.”

As the opportunity arises this year, we want to make sure you’re ready with some expert advice on the “how tos” of being bi, bi, bi, baby. And whether you’re just coming out or ready to find some community in a shared public identity, these proud bisexual stars and activists interviewed by the Gay Times’s Philip Baldwin have got you covered.

First up for our bisexual crash course on coming out and finding community, is singer/songwriter John Galea. Well known for his breakout single When You Truly Love Someone, Galea wasn’t always okay with publicly ditching brides for grooms like he so famously does in the hit song’s accompanying video. In truth, he remembers struggling to come out and found his greatest challenge to be what he called a “struggle within myself”

Growing up, a confused Galea was convinced that having the hots for a guy canceled out the validity of his attraction to women. Feeling the conflict of his own gut instincts against the beliefs of others, the singer says he realized, “it was important to embrace exactly who you are and not be afraid of other people’s opinions.”

Now free from the perceptions of others and definitely responsible for some good old bi visibility, Galea shares two key points of advice to get there yourself: “Don’t let other people’s opinions, or in some cases biphobia, define who you are,” and “don’t be afraid of treading down your own path exploring who you are.”

Next to bestow some bisexual wisdom is British actress Nicole Faraday. The 2006 Winner of the prestigious UK Theatre Award for Best Supporting Performance (previously the TMA Awards), Faraday is globally recognized for her theatre performances. But when it comes to her capability to find both men and women attractive she’s beyond done with people thinking she’s acting.

Feeling the conflict of his own gut instincts against the beliefs of others, the singer says he realized, “it was important to embrace exactly who you are and not be afraid of other people’s opinions.”

The out-actress most recognized for her role on the British prison drama Bad Girls doesn’t hesitate to bring the heavy-hitting truth whether she’s off or on-screen, “The greatest challenge coming out as bi is not being believed by either side really! Gay friends at the time told me I was being ‘greedy’ and ‘should pick a side’ while straight men in particular thought it was for titillation, their benefit rather than me genuinely forming meaningful same-sex relationships..”

After addressing some oft undiscussed stigmas of bisexuality, Haraway pushes her point further to tackle the alienation that comes with said stigmatization. She tells readers,“you are not alone or strange to feel like this.” Her following advice is a successful method tried and true, “look for local support groups or clubs with like-minded people. Check out the queer content on Netflix and Amazon Prime, as thankfully LGBTQ+ role models are a lot more mainstream these days.”

Coming in hot with some more solid tips for wholesome and healthy bisexual living, we’ve got LGBTQ+ activist Juno Bhardwaj-Shah. As the media officer at Stonewall in the United Kingdom, Bhardwaj-Shah works with the largest LGBTQ+ rights organization in Europe. Seeing him on the biggest scene for activism in the UK, it’s hard to imagine there was a time he didn’t recognize his own bisexuality.

But growing up in a South Asian home, he remembers “LGBTQ+ issues were rarely discussed.” He confirms that at the same time in his life, his school curriculum was a “woefully ‘non-inclusive RSE education.” Silenced by a lack of communal support, Bhardwaj-Shah claims the hardest part of coming out for him was, “recognizing and accepting my own bisexuality.”

Eager for others to feel the relief of living authentically, the young activist happily bestows the golden rule of coming out queer: “There’s no right way or right time to come out…trust your instincts and take your time – you know yourself better than anyone!”

For Ellis, the most difficult part about coming out was: “showing that your bisexuality is a constant part of your identity when so many just think it switches on and off.”

Just like her fellow guides, our next bisexual icon Irene-Elizabeth Ellis is proud to be a voice of reason for bi visibility. When she was casted for The Bi Life, Ellis wasn’t trying to make reality television history, she was just looking for love. Kind of like a queer version of Netflix’s British reality television hit Love island, The Bi Life threw Ellis into a luxury setting with other hot, bisexual singles.

Aside from duking it out on the likes of an amazingly dramatic and gay reality television show, the most difficult part of Ellis’s experience as a bisexual is, “showing that your bisexuality is a constant part of your identity when so many just think it switches on and off.”

Her proposed solution for the ridiculous reality of having to come out multiple times is to practice self-talk and internal reflection. With a unique take, Ellis advises to, “come out to yourself first. Be confident, imagine all the questions you might get asked and be prepared for them.” Perhaps, a pep-talk aloud in the mirror is in order just this once. “Trust me,” Ellis adds.

As for Rob Davey, a bisexual activist and trustee of Bi Bride UK, he recognizes that a rarity of a visible bi role models growing up made it nearly impossible to label himself, “I’d always known I was attracted to more than one gender but due to the total lack of bi visibility at that time I didn’t really realize what that meant.”

Being the bisexual role model he once wanted, Davey makes a point to direct readers towards finding freedom in queer fluidity, “use the labels that work…or even no label at all. You are valid and don’t owe anyone an explanation of your sexual or romantic attraction.”

Last, but certainly not least, Mandu Reid wraps up our bisexual survival guide with her experience as the Leader of the British Women’s Equality Party – and the first black and bisexual woman to lead a UK political party, ever.

Used to breaking boundaries by now, Reid just straight up tells it like it is. Unfortunately, she regrets to inform viewers of the limited scenarios a bisexual person can experience coming out against stigmatization and blatant bi-phobia, “​​At best not being taken seriously, at worst…Outright hostility from the gay and lesbian community as well as heterosexual people. From the very beginning, I’ve had to navigate suspicion and scepticism about my sexual orientation…”

Here and definitely queer, the political party leader provides a proper push in the right direction for young bisexuals, “Don’t measure yourself, your self-worth, or your value against standards or expectations of people who would be more comfortable if you conformed to their idea of normal.”

Reid, on the lookout for younger generations, manages to fit in one more point; and it just happens to be the first romantic tip of the interview: “The risk of rejection or being hurt is a real hazard, but don’t let that stop you from loving and living abundantly and with abandon.”

It is with Reid’s profound thoughtfulness that the declassified guide on coming out and forming community for bisexuals screeches to a full stop. But fear not, Into is indicative of something greater than a safe space: it’s a huge queer party where all your friends are waiting for you. In simpler terms, we’ve always got your back.