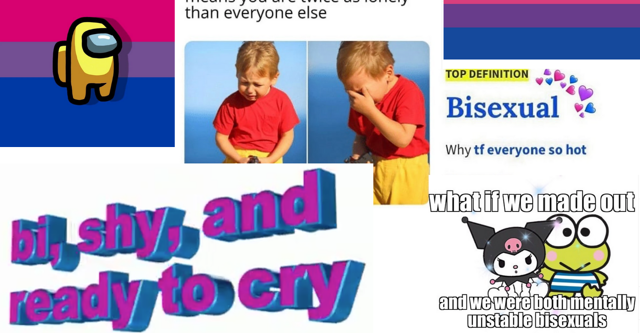 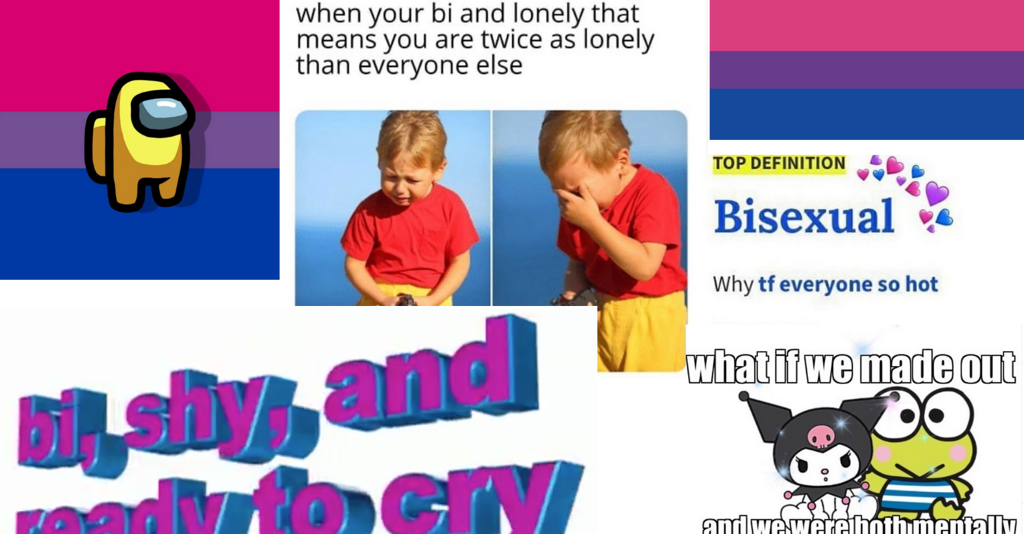 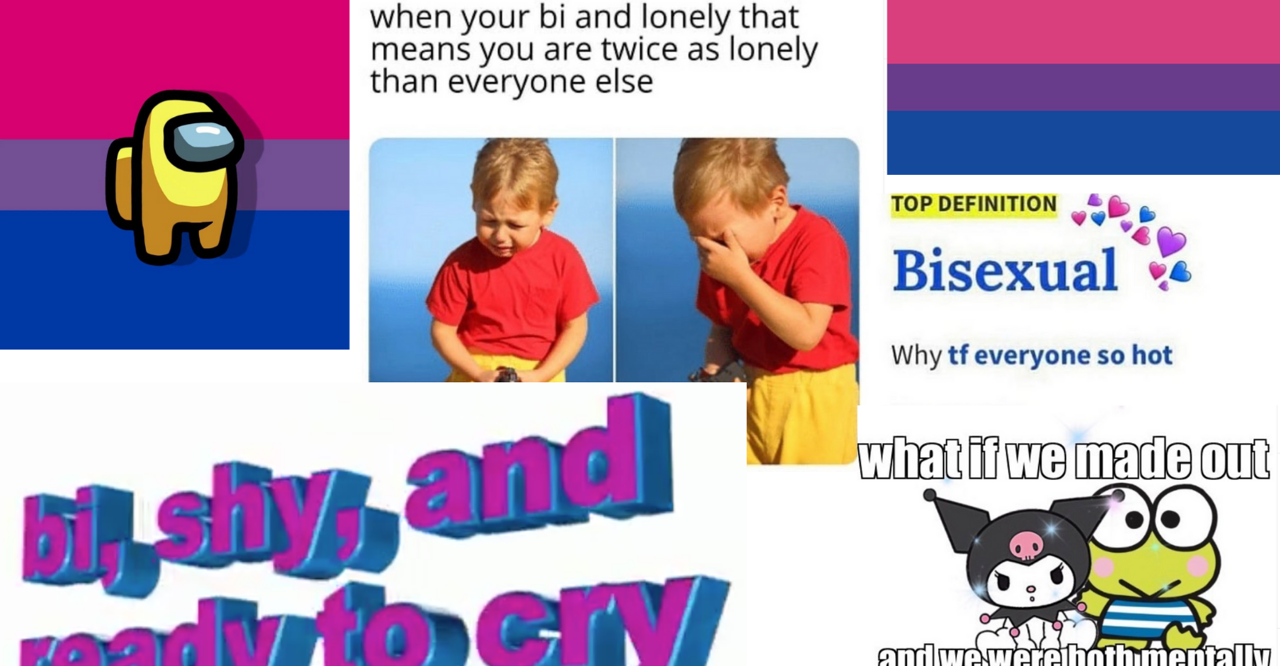 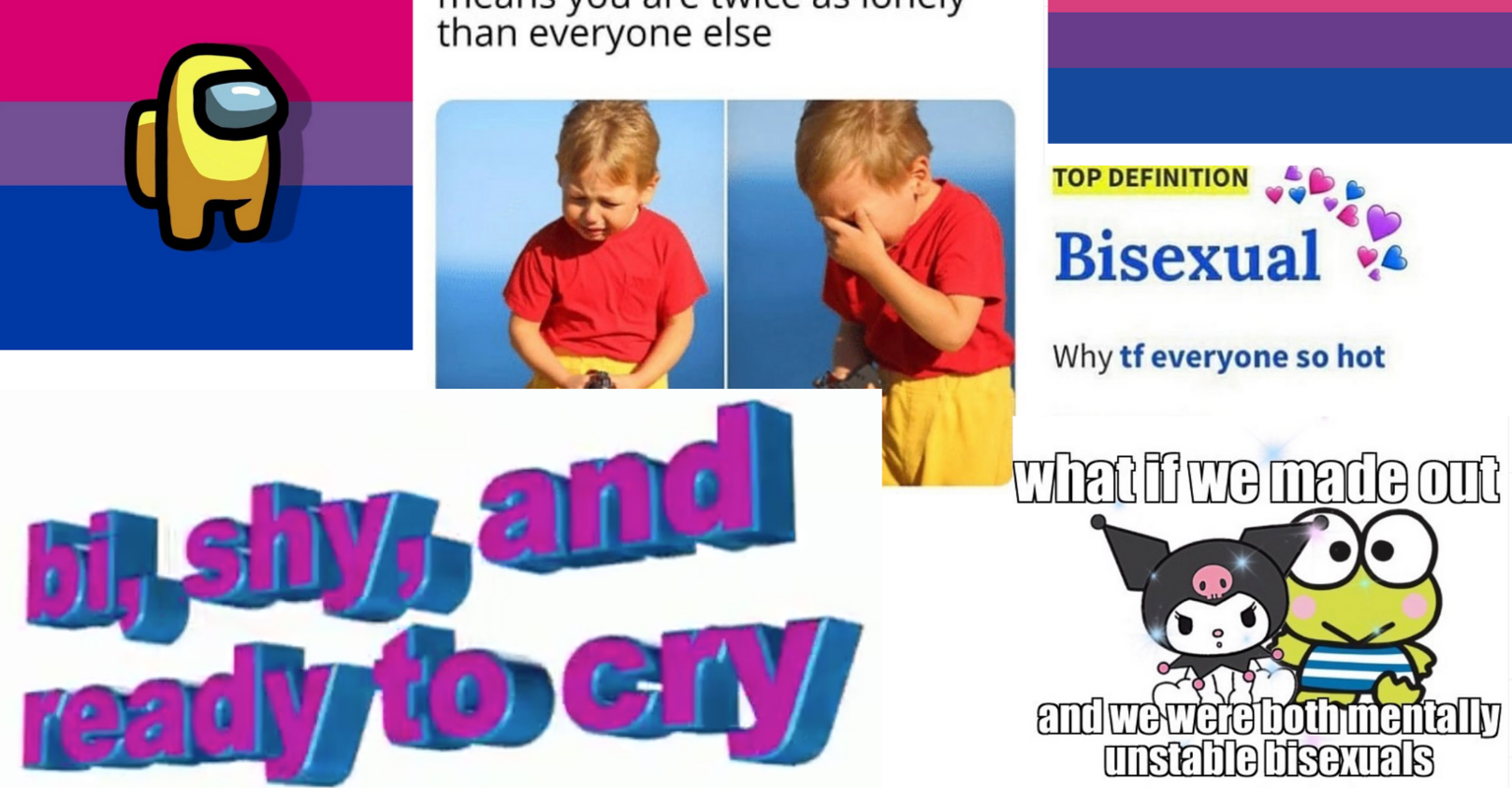 It’s #BiWeek, everyone! A celebration of the one week a year when the bisexual community collectively loses its stealth modifier and becomes visible to the naked eye. And because all bisexuals are, as we know, the same, we will once again be making the same seven jokes in honor of our newfound, if brief, visibility:

If you see strange people in your house today, don’t panic. These are probably bisexual family members. Usually invisible except for one day per year, they are typically friendly if approached. #BiVisibilityDay

confused about #BiVisibilityDay and #BiAwarenessWeek? it’s simple: on Thursday you will be able to see me, whereas at other times in the week you will just have a creeping, nagging sense of my presence, a creature of glimpses and whispers and prickles on the back of your neck!

All humor is to an extent formulaic and queer humor is no exception. But bisexual humor has emerged as a particular niche within the queer community, from the universal relatability of chopping your hair into a bob to the despair of watching Thor: Ragnarok and being attracted to the whole cast. Every September brings in a flood of “Posts that Sum Up Bi Culture” roundups on Buzzfeed or Cosmo, collected from Twitter and Tumblr and Instagram, some of them going back years. It’s always fun to see the familiar favorites repeated and to have new brilliance to bookmark, but taking the posts out of their community context removes part of what makes them resonate.

Any branch of marginalized humor comes with a certain degree of pain that’s been weaponized into resistance and resilience. But while “mainstream” queer humor is primarily grounded in solidarity within the community, punching up at straight culture as a whole (and sometimes individual straight people in particular,) bi community humor punches up at straight culture but also, to a certain extent, punches laterally—within the community itself.

All humor is to an extent formulaic and queer humor is no exception. But bisexual humor has emerged as a particular niche within the queer community.

There’s a reason for that. Queer humor focuses on the combination of the experience of being queer in a straight world, and assumes a certain shared vocabulary and connection amongst all queer people when confronted with that straight world—the ever-evolving “gay cousin” jokes, references to the “gay agenda” that have gone all the way up the queer culture chain to Lil Nas X, and tongue-in-cheek(…ish) references to all of us being depressed. There’s an assumption of a sense of solidarity: the idea that we’re all in this together, against a common enemy. It’s a nice idea, but frequently, it’s not the case.

“There’s this LGBT hierarchy, where cis white gay men are at the top and the likes of trans people and bi people seem to exist at the bottom,” a bi woman named Bella told Refinery29 this spring, as part of a reported piece on biphobia in the lesbian community. She continued, “I was at this LGBT conference when I started talking to a lesbian from Ukraine. When she heard how I identified, she said ‘Oh, I hate bisexuals,’ and everyone laughed.

There’s an assumption of a sense of solidarity: the idea that we’re all in this together, against a common enemy. It’s a nice idea, but frequently, it’s not the case.

Bella’s description of biphobia within the queer community isn’t outside the norm. A 2018 study suggested that both lesbians and gay men see bisexual women as more attracted to men, perceiving bi women as “inauthentic” in their attraction to women. Bisexuals, especially those in “straight-passing” relationships, are considered to be more privileged than other members of the queer community. The most frequently-cited argument is that (presumably cis) bi people in mixed-gender relationships don’t experience homophobia and are therefore able to feel included in mainstream straight culture. Neither of these really hold up to vigorous testing: “How come it’s called ‘bi privilege’ for us, but for gay men and lesbians, it’s rightfully called ‘being in the closet’?” Toni Stanger asked in an essay for Medium, unpacking the pervasive nature of biphobia in queer communities. “There’s a huge misconception that bi people can easily hide or that bisexuality isn’t as big of a deal as being gay is.”

Accusations of privilege to the contrary, there’s evidence that when it comes to health, safety, and economic outcomes, being bisexual is “just as big a deal” as being gay. According to Boston University Today, bi people “often have poorer sexual health, face more sexual violence due to fetishization and do not come out to their doctors as much as heterosexual or homosexual individuals.” Bi women in particular experience intimate partner and sexual violence at higher rates than lesbian or straight women. Nearly half of bisexual people report experiencing biphobia in medical settings such as hospitals or doctors’ offices; where approximately 90% of gay men and lesbians report being out to their doctors, only about two-thirds of bisexuals do.

Bisexuals experience what researchers have called “double discrimination.” “Bisexual people are often invisible, invalidated, and stigmatized—experiencing multiple forms of discrimination from the heterosexual community and the lesbian and gay community,” said Ethan Mereish, a researcher at American University. “This creates pressure to conceal their identity as well as internalize these stigma[s].”

It’s not just research-level academics who see the pattern: emerging bi writers are pointing it out as well. “Bi erasure and reductive performativity stem in part from the LGBTQ community’s attempts to homogenize itself. It’s easier for the queer community to gain respectability and social equity if its progress is easily identifiable,” a McGill University student wrote for a special edition of the McGill Daily, focusing on queerness and sexuality. “A gay couple signing a marriage certificate is a clear marker of success for the gay rights movement.”

This double discrimination, of being outsiders within a community of outsiders, has created a brand of humor that’s at once self-referential and scathing, taking no prisoners from inside or outside the queer community. In the digital age of memes and social media, bi community jokes spread quickly and easily, with meme accounts and searchable Tumblr tags making it even easier for even isolated bi people to feel a sense of solidarity with the bi community. Bi humor has evolved not just to form a group identity around layering flannels, hoodies, and leather jackets and the ongoing quest for the perfect graph to encapsulate bi identity, but also to offer a shared sense of camaraderie that bi people can’t necessarily get in the broader queer community.

From pointing out the ironic overlap in gay and straight perspectives on bisexuality to solidarity with other “controversial” sections of the queer community to tongue-in-cheek commentary on the need to show credentials for admission into queer spaces, bi humor is willing to point out the hypocrisy of biphobia in queer spaces while also leaning into the shared vocabulary and experiences of bi people. It’s not about who you sleep with or how many people of which genders you’ve dated, but about whether you connect to the experience of being just a little too invested in queer culture prior to figuring yourself out, being attracted to multiple genders but capable of flirting with zero genders, or just knowing what it’s like to have your voice misheard and your presence erased.

This Bi Visibility Week, pull up a chair (though don’t feel obligated to sit in it correctly) and lean into the hard punches of bisexual humor in all its exasperation and solidarity and early-2000s movie references.

And if someone startles when they see you, don’t panic. You’ll be invisible again tomorrow.♦