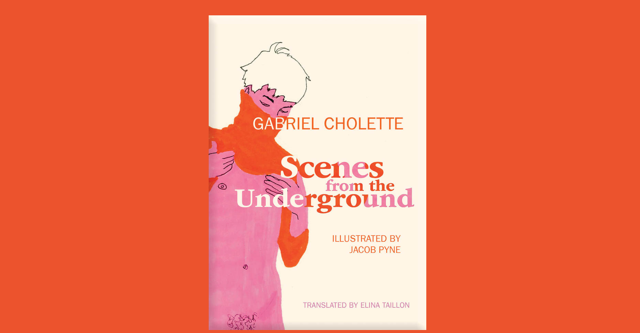 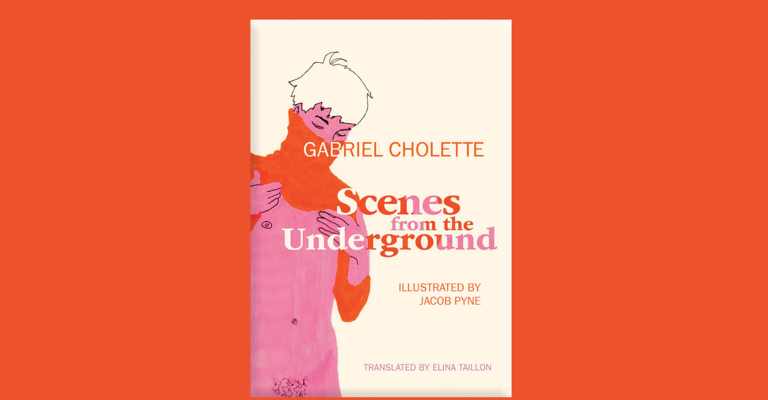 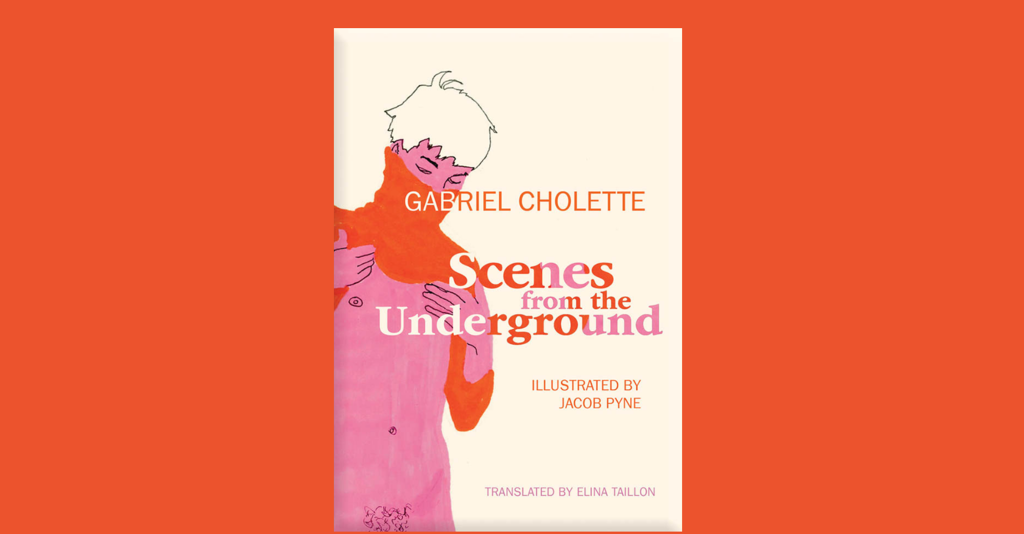 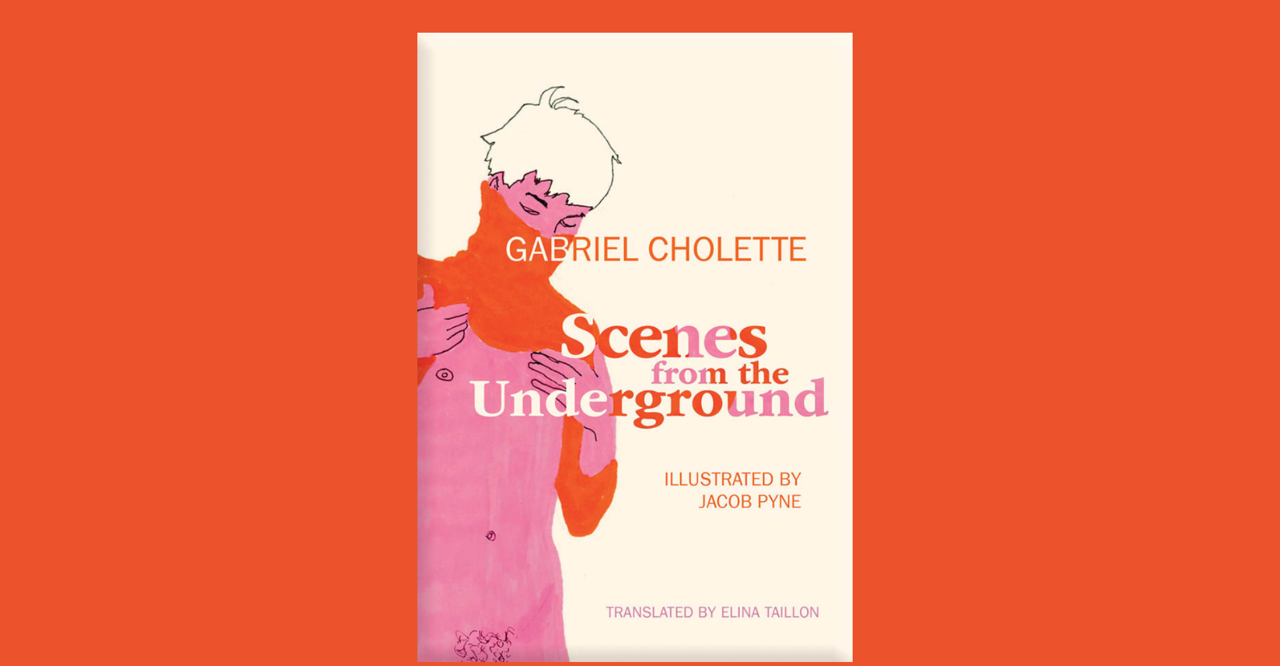 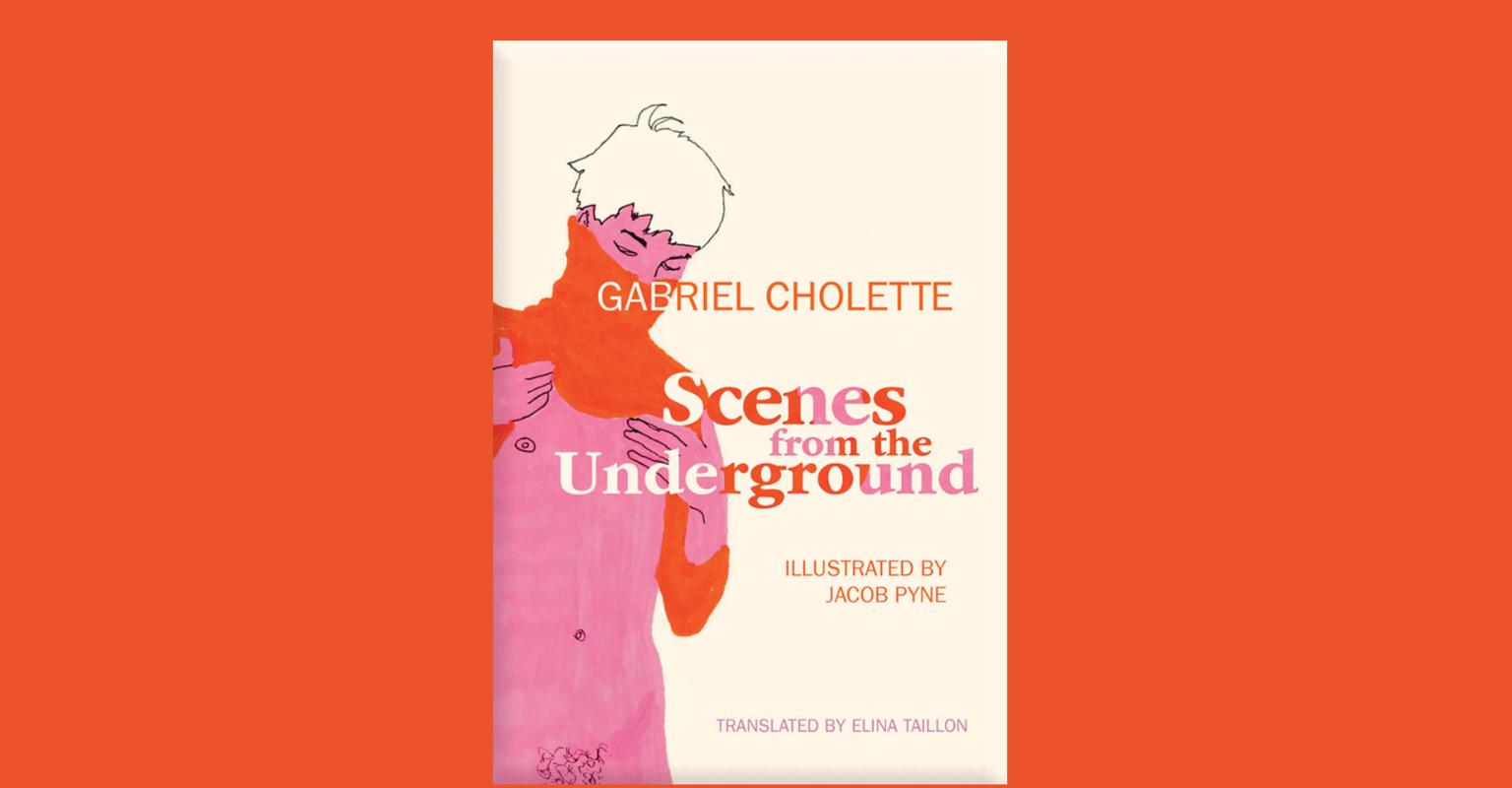 In Scenes from the Underground, Cholette illustrates the multi-various iterations of queer culture. While “underground” can have the connotation of hiding, the author is unbound from this notion and places pride and fearless self-expression at the story’s forefront.  Scenes pulls readers down the rabbit hole and into (anonymous) sex, drugs, and techno music, setting the tone as an ode to queer nightlife.

“I have just heard for the first time the expression ‘to make soup’,” Cholette writes at one point. “It means to mix the bottom-of-the-pocket drugs of everyone huddled in the club toilet stall, opened MD, ketamine, old dry speed, crushed e pills, to make big lines that will let us forget the past forty-eight hours that have been so difficult.”

Cholette’s prose dance across cities and countries in a ketamine-fueled buzz; illuminating a transient experience in which the night and its characters feel endless, though they never last. Whether in Paris or Miami, Cholette chronicles a universal nightlife experience in which Cholette’s path intersects with a stranger’s, highlighting the youthful optimism of falling head over heels for someone you hardly know, and the painful reality that proceeds the end of the night’s fantasies.

“Can anyone explain to me what I’m doing in New York,” he asks, “waiting for in the apartment of a guy who has a boyfriend from whom he’s hiding my presence?”

Exploratory recklessness and memorable moments go hand in hand, and with every electric evening spent twisting and turning on the dance floor, hypnotized by the myriad forms of escapism— sex, poppers, and flings with strangers. Cholette obscures his life’s normalities and leads readers through his vices and chaotic decisions.

Uncensored and unapologetic, the author has an unwavering ability to showcase what occurs after midnight; by doing so, he captures snippets of moments that universally resonate with many queer audiences. Within the evocative prose, there is no shame or fear of judgment, and that is what brings people into the scenes of the underground — the unspoken language in dark rooms and late nights trysts that offer a refuge to push one’s limits and explore desires.

Uncensored and unapologetic, the author has an unwavering ability to showcase what occurs after midnight.

While books such as Jeremy Atherton Lin’s Gay Bars: Why We Went Out revolve around the history of gay bars and pose the question as to how they can survive in the modern age, Cholette drops readers into a present where underground queer establishments are not hindered by apps, but transformed on an international level.

The underground realms once confined to an established gay club have evolved, creating a shift in which the queer community and its celebrations extend beyond the bar’s last call. Now, long after the disco lights stop spinning, the scene morphs into late-night apartment parties-turned-orgies, and even when alone in bed, scrolling through Grindr’s eligible (and sometimes un-eligible) potential hookups, as Cholette knows all too well.

Related: Can Gay Bars Survive Without Sex in the Air? An Interview with Jeremy Atherton Lin

But sometimes the party never seems to end. Without a clear division between virtual and in-person interactions, dating app flirtations can quickly spiral into real-life mishaps, as Cholette chronicles in the chapter “American Tour.” While vacationing in Miami with his friend, a combination of alcohol, online exchanges with a faceless man, and a quest for drugs leads to Cholette being kicked out of the bar. Worse, it’s not him but the friend he is with who ultimately hooks up with the faceless profile. But throughout these romantic and other times tragic entanglements, there is never an absence of community.

There is no shame or fear of judgment, and that is what brings people into the scenes of the underground — the unspoken language in dark rooms and late nights trysts that offer a refuge to push one’s limits and explore desires.

Community — the members known for years and the found family discovered for an evening — linger across every page. They build a radical Wonderland catered to each individual; one in which each person controls their narrative and journey.

Underground, there is no echo chamber, but rather a blank canvas where each visitor can create their wants and needs. Whether monogamous, polyamorous, or in search of their ideal type, the options are limitless in an environment free of external and internal criticism. Cholette succeeds in reflecting the facets of queer nightlife through a pensive lens, allowing readers to dissect its subjects and figures on their own terms, and boldly offers his personal experiences and in turn illuminating many of our own. ♦