Since Netflix’s release of the thriller Bird Box in mid-December, the internet has been abuzz with Sandra Bullock content. It seems that people are either just finding out about America’s Sweetheart, or are rediscovering their love for the Academy Award-winning actress. Regardless, now seems like as good a time as any to praise Sandy for her prolific career. And with #20GayTeen in our back pocket, and the Sapphic and suggestive Ocean’s 8 in our rearview, I just have one thing to say: The world is ready for Sandra Bullock to play gay.

Many of Sandy’s movies and characters have been adopted by the lesbian community in the past. Of course, there’s Miss Congeniality (2000), in which Bullock plays the crass and traditionally masculine FBI agent Gracie Hart. In May of 2018, the actress appeared on Ellen and revealed that the movie’s screenwriter, Marc Lawrence, actually wrote the movie about Ellen. So, if the open-mouth-masticating, baggy pants-sporting, brawny cop character felt queer to you, then you’re right—Gracie was actually based off a soft-butch! But I digress, the character wasn’t actually queer.

Tons of Sandy’s roles have a similar vibe and aesthetic to her Miss Congeniality character, one which can only be described as BDE (Big Dyke Energy). Look at her action movies alone: in the fast-paced thriller Speed (1994), the Bullock stars opposite Keanu Reeves as Annie. Annie bravely grabs hold of the wheel on a speeding bus, which has been rigged to detonate a bomb if it drops below 50 mph. At one point, Bullock drops her floral blouse and dons a tight turquoise tank-top, a la Sarah Connor in The Terminator; my gay ass swooned.

The following year, Bullock starred in The Net, another edge of your seat thriller, which features one of her gayest—and thus hottest—aesthetics ever. As Angela, a computer programmer turned badass action star, Sandy wears denim jackets, fondles floppy disks, and conquers cyberterrorists, all while dressing like a fluffy-haired 90s lesbo. The Net is actually a great movie, if you’re looking for more Sandy content to quench your gay thirst.

Obviously, there’s Practical Magic, the 1998 witch movie in which Bullock plays one of the Owens sisters, a line of witches who were cursed by their ancestor. The curse will kill any man who falls in love with an Owens sister, so wherever Owens women go, dead men follow. How these women don’t start dating other women is beyond me. If there’s ever a gay Practical Magic reboot, it’d have zero conflict and be utterly boring, because the Owens sisters could just date women and ignore the curse (I’m still super down though). But gay plots aside, Sandy wears choker necklaces in Practical Magic—choker necklaces!! The number one signifier of female queerness!! She also dons some high-waisted denim and does the Gay Lean—you know the one, where a woman leans against furniture like a mechanic wiping down his wrench. It’s the optimal position from which to exert pheromones. I love a woman who leans against furniture. Anyway, all witches are canonically queer, and therefore, so is this movie. 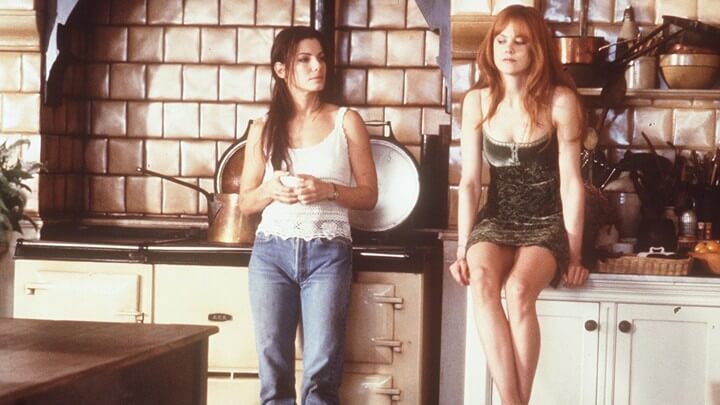 In The Proposal (2009), Sandy plays Margaret Tate, who was, in my eyes, a Power Lesbian trapped by the vise grip of internalized homophobia-induced heterosexuality. Margaret is a high-profile executive editor-in-chief of a publishing company in New York, and is the bitchiest, nastiest Jeri Hogarth-esque boss in the biz (all of those words are compliments, by the way). That any man, even Ryan Reynolds, was able to handle all that power-suited, sharp-tongued BDE, is a major feat. Then there’s The Heat (2013), where Bullock plays an FBI agent once again (it’s basically a Miss Congeniality sequel), and Gravity (2013), where she returns to her action roots as a rugged survivalist astronaut butch.

So, over the decades, Sandy has played numerous characters that have teetered on the edge of queerness. That brings us back to 2018’s Ocean’s 8. The lesbian community was set aflame at the sexual tension between Bullock and Cate Blanchett’s characters in the con movie; they read more like a long-term lesbian couple than a pair of friends or “partners” in crime. Actually, the biggest crime committed in Ocean’s 8 was the lack of consummation or confirmation of lesbianism between Debbie (Bullock) and Lou (Blanchett). One Vulture critic even ranked all eight stars by lesbian energy, and Bullock and Blanchett unsurprisingly snagged the top two spots, followed closely by Rihanna and Sarah Paulson.

And not for nothing, but Bullock pairs up with queer fave Sarah Paulson for the second time in Bird Box, which would’ve been a lot more exciting if the women had played girlfriends instead of sisters. Nonetheless, Sandy starred in yet another action thriller, saving the day with her Herculean muscles and panic voice. She flexed her rafting and survival skills, wore ugly hiking boots, owned a fucking bird, and yet somehow still ended up straight!

For male actors, there’s a long-standing joke (or realistic trend) that playing gay will win you an Oscar. The same cannot be said for female actors, because lesbian movies are historically snubbed at the Oscars (see: Cate Blanchett, Carol). However, Sandy has already won an Oscar for her role in The Blind Side (2010), and once you win an Oscar, you can pretty much do whatever the fuck you want. Most Oscar winners either keep winning Oscars, or start chillin’ in big budget thrillers and get memed out the wazoo by their gay fans (what’s up Nicole Kidman?). No offense to Sandra Bullock, who could easily swing another win at the Academy Awards, but she’s seemingly gone the latter route.

So, Sandy, here’s my advice: America is gay now, and if you want to remain America’s Sweetheart, you need to dig deep and get gayer. Strap on your ugly ass Land’s End hiking boots and an L.L. Bean vest—or bulletproof vest—and team up with Cate Blanchett or Sarah Paulson again. Give the people what they want. Actually, here’s my advice to all Academy Award-winning actresses over 40: If you’re not going to keep winning Oscars like Meryl Streep, then just lean hard into lesbianism and getting memed, and I promise, you’ll never ever lose an ounce of relevance. Just look at Rachel Weisz. Rachel Weisz starred in two lesbian movies in 2018, and has set herself up for a bountiful life devoid of Oscar wins. And really, isn’t that a utopian future for Hollywood actresses?