TORONTO — There’s a moment in Rafiki where the camera slows down as Kena (Samantha Mugatsia), the film’s protagonist, watches Ziki (Sheila Munyiva), the young girl she’s falling for, dance in front of her for the first time. It’s the first time the film plays with the elasticity of time and it’s also the moment you realize just how invested you’ve become in Kena and Ziki, the couple central to the film’s story.

“I wanted us to feel the sense of being watched and looked at, and also when somebody looks at you in love,” the film’s director Wanuri Kahiu told INTO in an interview at the Toronto International Film Festival. After debuting in May at Cannes, the film was screening at TIFF. The scene is the first time Ziki, the colorful, bewildering love interest to Kena’s more staid protagonist, makes a real play for Kena’s affection. They are on a date far from their neighborhood of the Slopes outside of Kenya’s capital, Nairobi. 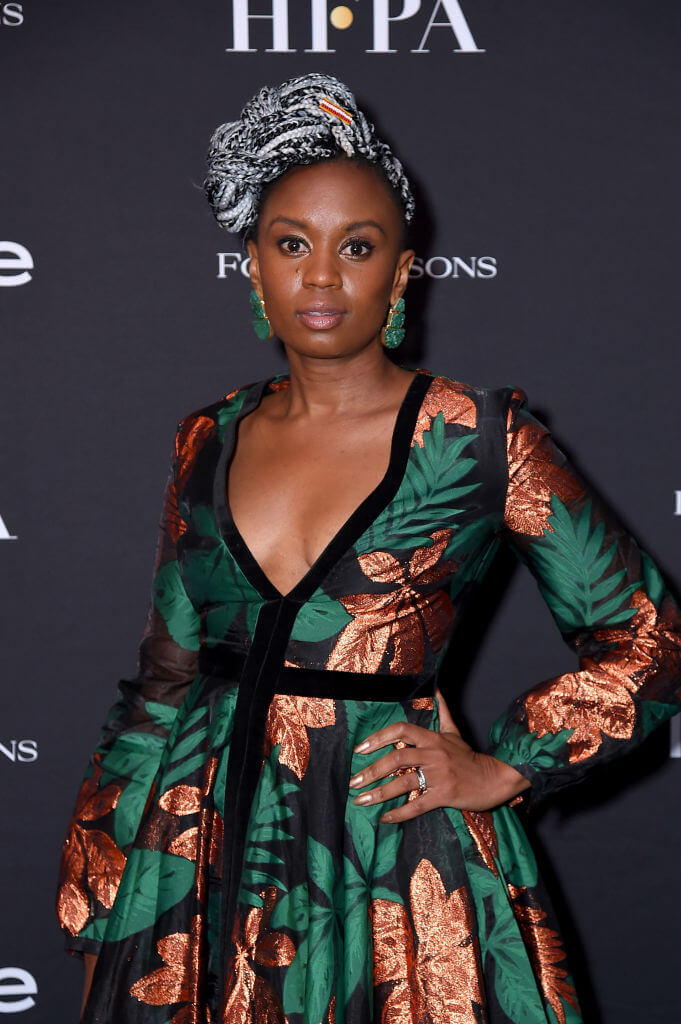 Rafiki is a deeply moving and visually arresting film that should be seen by everyone — but it’s currently banned in the very country where it’s set. Just before its debut in May, the Kenya Classification Review Board banned screenings of the film in Kenya because of its “clear intent to promote lesbianism.”

The @InfoKfcb has banned the film "RAFIKI" due to its homosexual theme and clear intent to promote lesbianism in Kenya contrary to the law and dominant values of the Kenyans. #KFCBbansLesbianFilm Dr. @EzekielMutua @moscakenya @PresidentKE @WilliamsRuto @wanuri @NellyMuluka pic.twitter.com/9hBQOukHv3

Rafiki began with Kahiu’s desire to tell a modern love story based on modern African literature. She read several short stories before selecting “Jambula Tree,” by Monica Arac de Nyeko, to serve as the basis for the film because it was “so sweet and so kind and so patient.” From the story, Kahiu took Kena and Ziki as well as another character, the gossipy Mama Atim. Kahiu created the rest of the characters to fill out the story.

And they do just that. Around the two central characters, Kahiu constructed a bitter political rivalry that makes the modern love story feel as classic as Romeo and Juliet. Kena’s father, John (Jimmy Gathu), a local shopkeeper, is campaigning to replace Ziki’s father in a local political office.

Though there are forces keeping them apart, Kena and Ziki are drawn to each other — and it shows. Watching the two characters fall in love with each other is an engrossing cinematic experience, one that easily elicits investment from the viewer. Ziki is a more-than-worthy entry in the pantheon of Manic Pixie Dream Girls throughout cinematic history. Early in the film, she convinces Kena to abandon her small-town Kenyan mindset and imagine more possibilities for herself — a life that includes becoming a doctor and finding love.

“Ziki really challenged [Kena] to think about her own ambition and what she could do,” Kahiu said. “The ability to fall in love is courage, any love is courage. She taught her how to be courageous.”

Rafiki makes the most of its visual medium and offers its viewers a kaleidoscopic world of power-clashing prints and bright hues. And the characters are no exception. According to Kahiu, the two characters’ colors were meant to complement one another as the film progressed.

“From the beginning of the film, they are dressed in opposite colors and then as the film goes on, the color start to complement each other,” she said. “Kena always had touches of African print, either in a swatch of her pocket, or fabric in different ways. And then Ziki, we used, like, more of a pink and purple palette and what would contrast with pink and purple to dress her. We wanted her in colors that are considered very feminine and then we played with the both of them.”

While most films about queer women usually stick to having both women present as feminine, Rafiki’s protagonist Kena is decidedly more masculine — she plays soccer with other boys, while her guy friends hesitate to allow Ziki and her group of fashionista friends to join their sports fun.

“You felt the love in the films and I wanted to recreate the visceral feeling of ‘in loveness,’” Kahiu said.

Ziki and Kena first express their love physically in Kena’s secret VW bus hideaway, which she refurbishes as a sort of quasi-treehouse queer refuge. Kahiu said it was important to create a space where Kena could feel safe and secure enough to invite Ziki.

“There’s no way she would’ve been able to manage that struggle in public,” she said. “The van was such a natural space for her, so we made it her space. We put touches of her things in it. And we kind of developed it. As the relationship grew, so did that space.”

Homophobia rears its head both subtly and violently in the film. Kena’s own friends make fun of a gay guy in the town and Kena’s own internalized homophobia and fear of social abandonment stops her from fighting back. The gay male character shows up several times in the film and doesn’t speak — rather, he is a presence. After Kena doesn’t stand up for him, he ultimately stands in solidarity with her after the film’s emotional climax.

“To see that person who she didn’t stand up for sit with her was incredibly important. He showed the most humanity and he showed the most compassion and love and understanding and it was important to see that she was understood and that there was somebody who knew what she was going through,” Kahiu said. “It was the contrast of her rejection at the beginning and not standing up for him and kind of sort of going along in silence with the way they were taunting him and teasing him and bullying him.”

The film also deals with the homophobia of the church. During a sermon in church, Ziki flirtatiously grabs Kena’s hand during an anti-gay sermon, which leads to the couple’s first argument. The scene shows Ziki’s playful nature in contrast to Kena’s more reserved cautiousness. For Kahiu, including the church was so important because of the fraught relationship between queer people and the church.

“Even when I made the film, the first thing I was told is that it’s against God,” she said. “That’s the first thing that people go to. I felt like I couldn’t make the film without addressing that in some way, so it was important to show that.”

I spoke to Kahiu about the significance of the film playing TIFF just after India decriminalized homosexuality, as both Kenya’s and India’s anti-gay laws have the same root: British colonialism.

“It is colonialism, those are all colonial laws,” she said. At a Saturday night screening of Rafiki, Kahiu told the audience that homophobia is not African, but rather an artifact of colonialism.

I ask her about the moment this film lives in and what she hopes Kenyans who do get to see it — either outside the country or if the ban lifts — should take away from the film.

“I really hope that when Kenyans see it, they see that people fall in love the way they fall in love. It’s no different,” she said.

She added, “What makes you drawn to a person you can’t explain and it can’t be stopped. I want them to see the process of falling in love and not question it or have it be alien or foreign or corrupt, just the humanity and beauty and simplicity of how easy it is to fall in love with someone else.”

According to Variety, Rafiki will come to New York, Los Angeles, and five other cities later in 2018.