It’s no secret that coming out can be daunting. It was, however, especially daunting for musician Rayvon Owen, who revealed his sexuality to an audience of millions by sharing a beautiful on-screen kiss with now-boyfriend Shane Bitney Crone in the video for “Can’t Fight It.” The clip quickly racked up views, as did a Billboard article in which he talked about hiding his identity while he was a contestant on American Idol for fear of alienating conservative audiences much like the ones he grew up surrounded by.

Now, Owen consistently uses his ever-growing platform to speak out on issues still plaguing the queer community, as well as sparking difficult conversations about race, sexuality, and his own conservative upbringing.

These themes all permeate the lyrics of his music, particularly the newly-released love song “GOLD,” which premieres today. An infectious synth line bubbles underneath Owen’s smooth, soulful vocals as celebratory trumpets drift in and out; he describes the sessions which spawned the track as some of the most fun he’s ever had, and this sunny mood is written all over the catchy, invigorating track.

In celebration of its release, we reached out to Owen to talk visibility, his childhood dreams of being a Disney Channel star, and a major life-changing conversation with Lionel Richie.

Last year, you came out publicly on “Can’t Fight It.” What drove that decision?

Rayvon Owen: I thought it was important to be open and honest with my fans and to share more of my personal story with them. Not only that, it was a therapeutic process for me as I learned to accept myself and be more authentic. I also thought that, if it could help others to learn to accept themselves, then it would be worth sharing.

What has the reception – both personal and public – been like?

Rayvon Owen: It has been both positive and negative, but mostly positive. For every negative comment, there were dozens of positive ones. Some of my family and close friends were disappointed and thought I wasn’t using my voice and my platform in the right way, but I’ve gotten so many positive responses that show me otherwise. When someone tells me it helped them to come out to their family and friends, or even that it helped save their life, then I know it was worth it.

You’re a campaigner for LGBTQ rights and Black Lives Matter, as well as various other causes. Is it ever daunting to be so visible in terms of using your platform to highlight these issues?

Rayvon Owen: Of course. I never initially thought of myself as a campaigner or an activist, but I sort of fell into it and learned the importance of sharing my story. Even though you may get backlash, I think it’s important to stand proudly behind what you believe in.

There’s still this idea that being a queer musician can lead to industry tokenization. Do you think this is still true?

Rayvon Owen: As I have grown more confident, I still have insecurities about this – as I think many other queer musicians do. However, I think it’s becoming less and less true. Look at gay artists like Elton John and Freddie Mercury; they have paved the way for younger musicians who are killing it, like Sam Smith and Troye Sivan! They are continuously breaking those barriers and eliminating stereotypes to show us that you can be a successful, respected musician without being pigeonholed. I’m grateful for them, and for other artists who are positive role models. 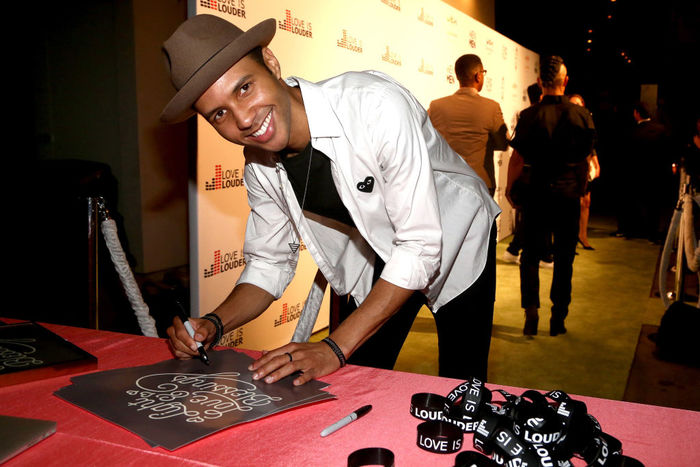 Can you tell us a little about the new track, “Gold,” and its lyrical themes?

Rayvon Owen: The process of writing that song was one of the most fun sessions I’ve had. I wrote it with Nate Merchant, who was one of the co-producers for “Can’t Fight It.” We were both in a really good mood that day! I had recently fallen in love and started dating my now-boyfriend, Shane Bitney Crone; I was experiencing emotions I had never felt before. I was finally accepting love for myself and for someone else, and I couldn’t think of a better way to capture that mood.

Musically, how would you define your work?

Rayvon Owen: I would define my work as pop, with soul and R influences. I love current music, and each song I write is like a timestamp of whatever I’m feeling at that moment. I love lush keyboards and synth sounds that are “vibey” but still have a groove. Overall, I want my songs – musically and lyrically – to make people feel something.

What sparked your decision to move to Los Angeles?

Rayvon Owen: In high school, my BFF Jaimi Gray and I always wanted to move to LA and be on the Disney Channel (lol), but I ended up going to college at Belmont University in Nashville instead. During my senior year there, I started to think about what my next move would be after graduation.

There’s a fun story: one day, while I was doing laundry in my dorm room, I got a call from my cousin who was in LA. She said, “I have someone who wants to talk to you.” She passed the phone to Lionel Richie. I was floored! We talked about music, life, Los Angeles, and the industry, and he said he wanted to meet me. I flew out two days later and just fell in love; it felt like the place I needed to be, and I wanted to expand my opportunities and my knowledge about music and the entertainment industry.

There’s a lot of talk about representation – do you think, in the mainstream, the LGBTQ community is still lacking that?

Rayvon Owen: Yes and no. As I mentioned earlier, thankfully we do have a lot of mainstream examples of LGBTQ musicians now, but it’s always nice to hear about more artists coming out or speaking out for the gay community. While we could always use more, we’re lucky to have mainstream allies like Demi Lovato and Lady Gaga – to name just a couple – who also do so much to help the LGBTQ community.

Did you personally have any LGBTQ role models growing up?

Rayvon Owen: Honestly, I didn’t. I unfortunately never allowed myself to look up to any. I was so uncomfortable with that part of myself. I was happy to find out Luther Vandross was gay though – he was one of my first big musical influences growing up.

You’ve talked about growing up in an extremely conservative environment. As you grew up, did you find you had internalized some of these attitudes?

Rayvon Owen: Absolutely, as many other young gay people have (and probably still do). It has taken me a long time to get to where I am today; I continue to learn and grow each and every day to shake off internalized homophobia and accept myself for who I am.

Finally, what are your future plans? We know there’s an EP coming – can you tell us more?

Rayvon Owen: Yes, there is a project coming this year that I’m super excited to share. It’s going to be a little different from what people have heard from me so far – but that’s all I’ll say for now!