Scarlet Envy, known by some as “the prettiest drag queen in New York City,” approaches her cabaret-inspired drag with a “Southern charm-meets-New York City-sarcasm” sensibility kindled in the fires of a Kentucky upbringing. Her studies at FIT were fuel for the flame.

Fresh off her feature in Revry’s Queens of Kings, and currently preparing her autobiographical cabaret, Smoke & Mirrors, for a reboot, Scarlet sat down with INTO to discuss her Southern drag and Brooklyn drag — past, present, and future. 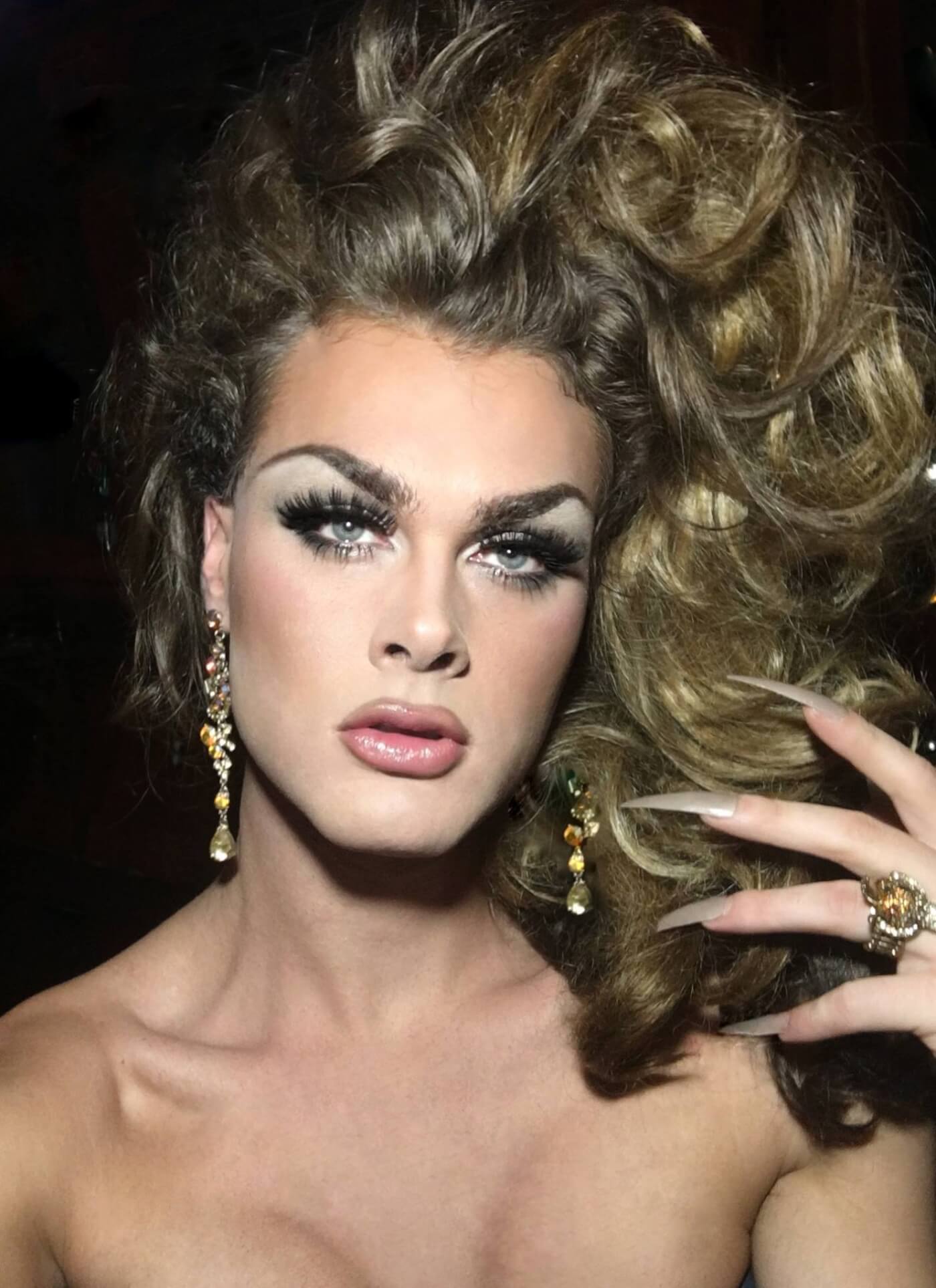 What does it mean for your drag to be “Southern”?

I think that, as much of New York City kind of shapes us, I think that really, what needs to happen is, actually, more of a marriage of what you bring to it. A lot of people discover who they are when they get here, and that’s great, but you also kind of take a few bits and pieces of what you were before you got here.

Before I got here, I was a completely different person. New York City sharpened me up a little bit, and I definitely came into myself, but there’s a big part of my heart and my soul that will never actually leave the Bluegrass State.

You talk to about the Brooklyn-ness of drag and how rooted in Brooklyn. What does that mean to you?

I call it dive bar glamour. I love to wear an incredible, huge gown to a dirty, dirty hole-in-the-wall. The Brooklyn part of me, I think, is where maybe the grunge comes in.

I hosted a really big salon party for VIP clients at a Danish beauty brand in Williamsburg, and it was very glamorous — a lot of sequins, really big hair, very drag. But I didn’t shave my armpits because it was Brooklyn. It’s that kind of thing. I do a lot of monster looks, a lot of special effects makeup. No matter how editorial things might get, there will always be a part of me sweating it out at 4 am at a dive bar in a jock strap in Brooklyn.

Given that cabaret and drag are very different approaches to performance on stage, what’s it like for you negotiating them at the same time?

Well, I would absolutely agree with you. I think they’re very different things. I have never considered myself to be a singer; I’m a drag queen who sings, not a singer who does drag. I think there’s a big difference between those two things. We all know the queen who didn’t make it on Broadway, so now, like, “I guess I’ll put a wig on and try this,” which is definitely not what I want out of it. I write my own music, starting last year. So for me, it’s about the words — I think it’s what separates the cabaret from a drag queen who sings. I’m not a vocalist. I think I’m more of a writer.

I love to write. I think it really comes down to writing. I’ve always been writing, I always write. I keep journals and diaries fairly obsessively, document details about big days and things like that. So that’s really what it is; it all comes out of that. Even if it’s not writing for the stage, I’m always writing.

And with the proper team — and I have very talented friends and musicians that I work with — that kind of elevates it.

Some performers say that costumes are a kind of armor that allows them to get into really personal material. Do you identify with that?

Oh, absolutely. I think that I’ve said this in the Revry episode, but New York City kind of takes care of some self-consciousness in the first few hours that you’re here. I think you have to be here for you, and you have to be confident about it. And it doesn’t really matter what you’re doing. And I don’t know if there’s any better way to do it, rather than to add a little confidence with the wig and glasses. It definitely make me feel stronger. But to each her own, I guess. 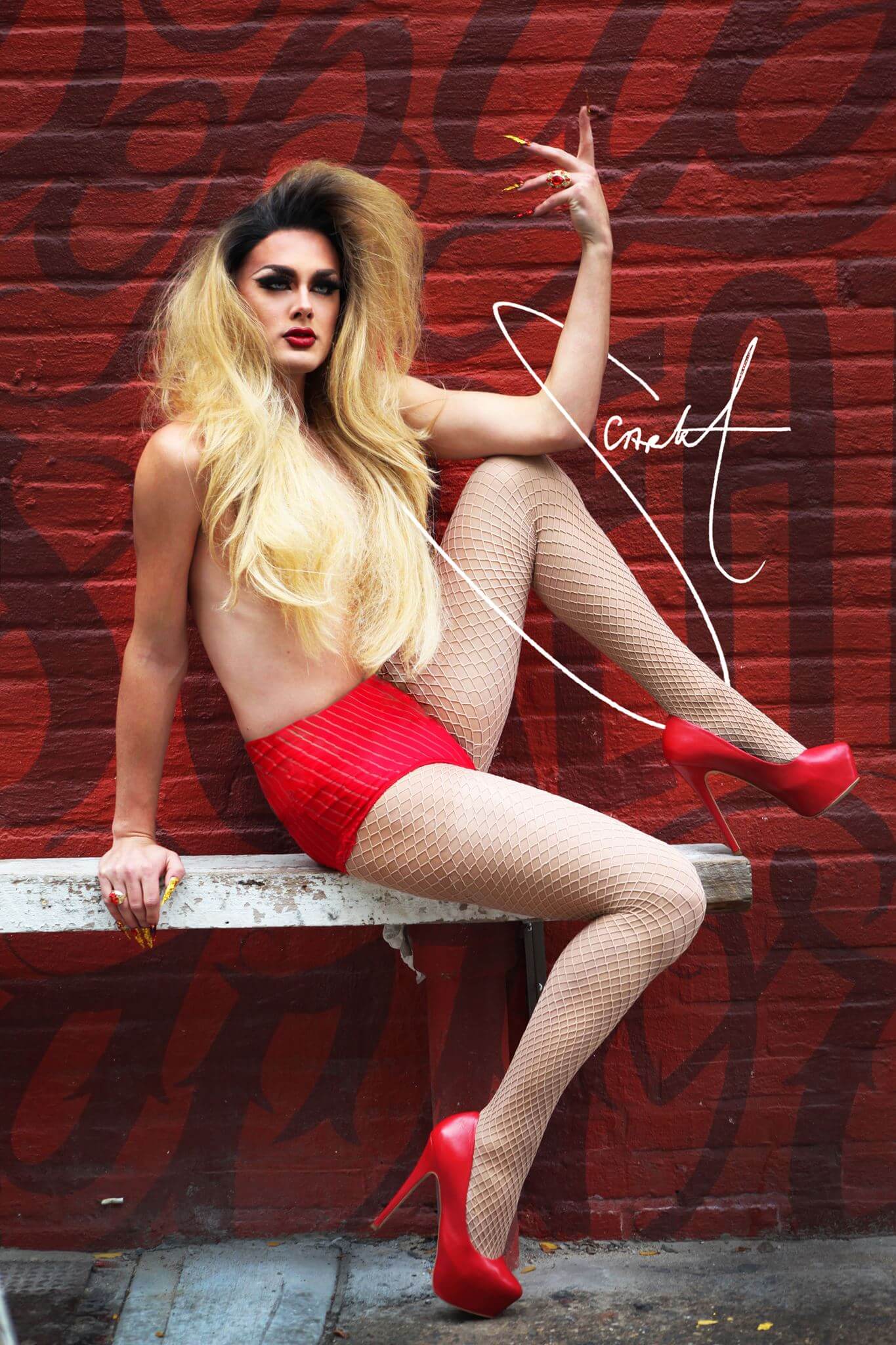 Is getting onstage and performing autobiographical work in drag a form of coming out for you?

Well, I wouldn’t say it’s coming out. I would say it’s more of a therapy. And I actually say that in the show, because at the end of the show, when it’s kind of coming to a close, I say, “I feel so much better! This is like therapy, but better, because you’re paying me to watch me process this in front of you.” It feels great. No matter how many times I do a show, it still feels like a very healthy form of therapy. And I’m working through things like my relationship with family, and my self-confidence, and issues on subway trains. I mean, anything that I’ve talked about is dealt with, and I look amazing doing it.

Tell me about the looks you’re going for now.

Right now, I’ve been definitely embracing more of what I look like out of drag. I actually like hair color or wig that are my actual natural hair color. And I’ve been really embracing my natural brow. I call it my Brooke Shields brow. I’m wearing earth tones, and I’m definitely moving more of an editorial direction. I make most of what I wear. I learned to sew at MIT. But I kind of taught myself. I like watching. The fashion design student and then I borrowed a sewing machine. My best friend’s grandmother and you know developed from there. But it’s definitely an important part of my Drago’s that I feel like I know the stitches and the scenes and where the zipper is going to have trouble going up and the details of like you know what I’m wearing and I also find my own hair the most I guess I have trouble accepting help from others but when I do it when I do I mean I have an incredibly talented friend and you know an amazing pool of talent people from so. You know it’s also a little collaboration never her

What’s it like, now that Brooklyn drag is more in the mainstream?

You know, a few years ago, no one would even go to the borough, and now, we have an incredibly heightened awareness of drag. I always say, “Every gay has a wig on now, for better or for worse.” I mean, drag is inspiring. It should be. But because of the popularity of drag, specifically in Brooklyn, I’m not sure that the up and coming queens are maybe doing it for all the right reasons.

When we were doing it before Brooklyn was ever even on Drag Race, I was just excited to be able to actually gain entry into a club that I was underage for. It was just such a fantasy, you know. They were going to give me money for this?! Like, I was going to put a wig on and I could just, like, say whatever I wanted in a microphone?! It was just magical. It was just so simple. And it’s just not like that anymore, for better or for worse. I don’t know. But it’s a lot more complicated these days.

And I think that it’s a lot more business-oriented and people are incredibly thirsty. And I’m not saying they shouldn’t be, but it’s definitely developed, and I think it will continue to. And it’s really exciting that we can look ahead and see what it’s going to be.

And what do you think it’s going to be in the future?

I think that, as with anything else that kind of waxes and wanes, I think we are at a renaissance right now, and I think that maybe it’s just that people are now realizing that we can do crazy things, that the cookie-cutter drag that we’ve seen for so many decades is actually not the only option. And it sounds so simple, and it’s honestly a revelation, I think, that we came across thanks to people like Milk and Thorgy, who were given that platform and kind of showed Brooklyn can elevate a bit.

But I think there’s so many amazing things happening in Brooklyn that have nothing to do with television — local queens, sweating it out on stage, night after night, not being paid what they should, but accepting what they get, and gigging again the next night. I’ve been on that suitcase life — you know, dragging that suitcase through the city. It’s not exactly glamorous, but it’s definitely dues that need to be paid to the queer community as a whole, I think.