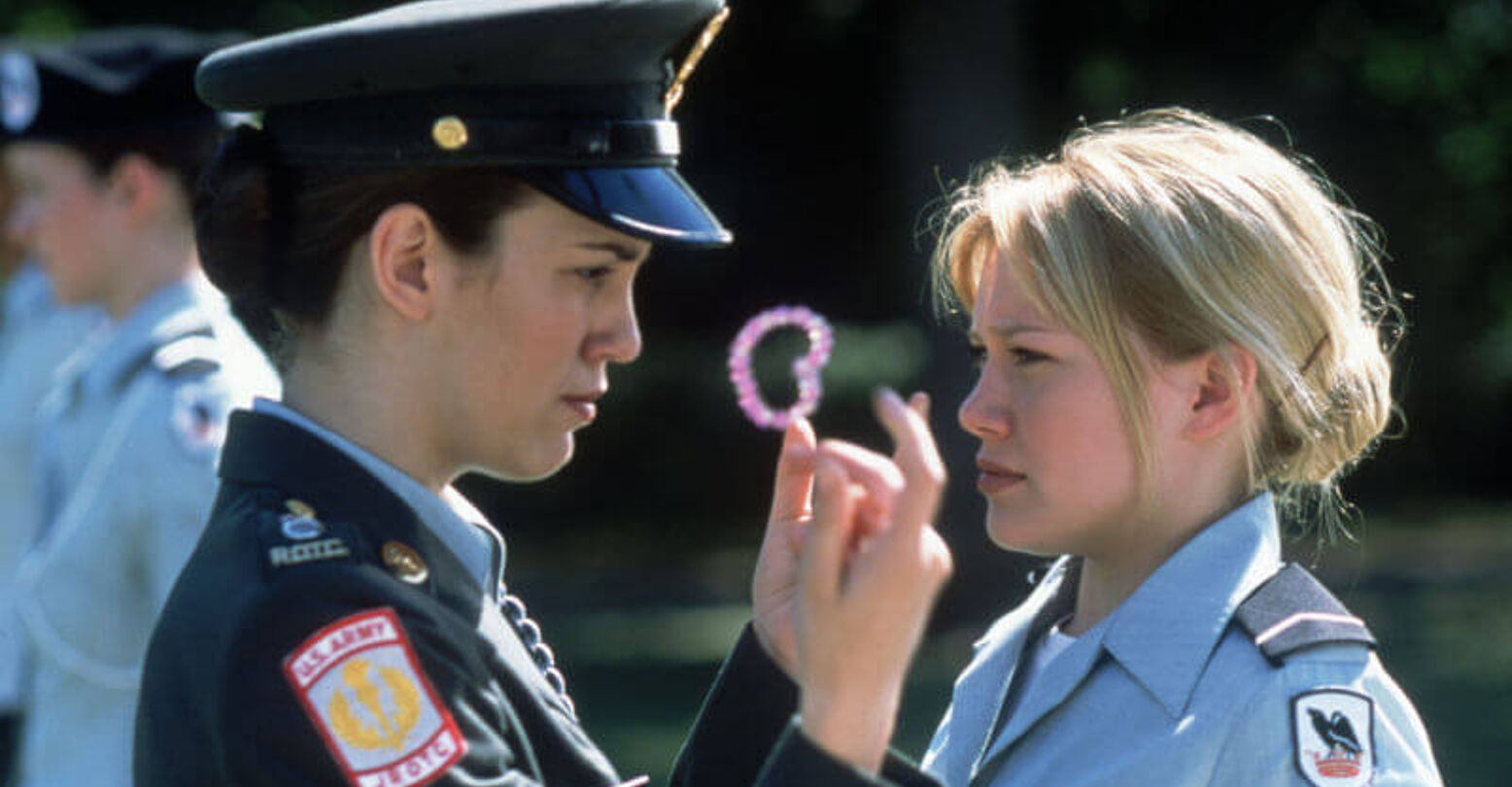 Keira Knightley is currently starring in the queer film Colette, which hits theaters today, and spoke to PrideSource about past queer roles — or rather, roles that should’ve been. Apparently, the actress wants a lesbian Bend It Like Beckham sequel — which like, same.

While discussing the 2002 sports comedy, the reporter asked Knightley about a swirling rumor that the movie was originally written as a lesbian love story. She said, “I never read that version of the script!” But when the reporter said many people in the LGBTQ community wanted Jess and Jules to end up together, the actress said, “Fuck yeah! That would’ve been amazing. I think they should’ve been too. I think that would’ve been great. We need a sequel.”

Well, I wholeheartedly agree, and have always believed that Bend It Like Beckham had more lesbian vibes than a Banks concert. Here are six female-focused films that deserve a queer sequel.

Starring 2000s teen queen Amanda Bynes, She’s The Man was a playful teenaged take on Shakespeare’s classic Twelfth Night. Bynes’s character dresses as a man and pretends to be her twin brother in order to play soccer at his new school, Illyria, because the girls’ team got cut at her school. Obviously, this movie is brimming with commentary on gender identity, but there’s a girl-on-girl love story that often goes overlooked, and that’s the one between Viola (Bynes) and Olivia (Laura Ramsey).

Olivia falls for Viola, while she’s dressed as her brother Sebastian. But at the end, when Olivia finds out Sebastian has been a girl this whole time, she’s confused, and eventually just decides that Viola’s real twin brother is enough for her, and pretty much the same thing — girl, no. So, can we please, for the love of goddess, get a sequel where Olivia ruminates on the experience of falling in love with a woman and grapples with what that means for her own sexual identity?! Clearly, Olivia was attracted to fake Sebastian’s feminine energy, between his (her) sensitive side, interest in fashion, breadth of empathy, and, well, her soft, feminine features. She’s The Man 2: Lost & Dillyrius, in theaters this Fall.

To be fair, Pitch Perfect is already a trilogy, but in the three long, a cappella-filled movies, fans never even got one kiss between Beca and Chloe! The first movie follows the alternative and sharp-tongued Beca, played by Anna Kendrick, as she falls in love with her a cappella group at Barden University. Really, the movies are friendship porn, but all three films have hinted at Chloe (Brittany Snow) harboring a major crush on Beca. From their first Sapphic moment singing a “Titanium” duet in the showers, to post-grad Chloe admitting she wishes she experimented more in college, to her double-cup groping Beca in the third installment—clearly, Chloe was thirsty for her best friend, and it may have been reciprocated.

Even Anna Kendrick has spoken publicly on the #Bechloe fandom, and has advocated for it herself. “I definitely wanted to have an ending that was a Bechloe ending, and we did shoot one version where Brittany and I tricked everybody into just shooting one that was just the two of us getting together,”  she told PrideSource.  “We knew it was a long shot. It meant so much to us that there was this following around their latent relationship and, yeah, I thought it would’ve been really cool if it would have ended up coming to fruition in the end.” And if there’s ever a Pitch Perfect 4, Kendrick said she’d go to bat for the #Bechloe stans. “If we ever do a four, I will fight tooth and nail for it,” she said, “but I’m not sure it’s gonna happen.” There you have it! Pitch Perfect: Bechloe 4nicates.

Sierra Burgess is a Loser

Sierra Burgess is the kind of movie that leaves straight women and queer women feeling like they watched two completely different films. For straight women — who tend to be  um, blind — the story is about two high school girls, Sierra (Shannon Purser) and Veronica (Kristine Froseth), finding friendship through catfishing a guy at another school. For queer women, this is clearly a story about two girls falling in love and realizing men are trash (even though, to be fair, the women in this movie are trash).

Veronica is the school’s bully and queen bee, while Sierra is, according to the title, a loser. The duo helps each other out — Veronica agrees to catfish Jamey (Noah Centineo) for Sierra if Sierra helps her get smarter so she can date a college guy. After both operations unsurprisingly crumble, they’re left to pick up the pieces of the relationship they’ve formed together, and the movie ends with a knowing glance and a hug between the two girls.

So, I’m officially lobbying for a sequel that’s A, less problematic, and B, significantly gayer. C’mon, Netflix, give us the lesbian rom-com we all deserve: 2 Sierra 2 Burgess.

Many-a-queer has theorized about the Sapphic relationship between the two leads of Bring It On, Torrance (Kirsten Dunst) and Missy (Eliza Dushku). However, I also clocked bubbling sexual tension between Torrance and her competition, Isis (Gabrielle Union). Basically, this movie is brimming with sexual energy between all the female leads, and all girls sports movies from the 2000s are canonically gay.

Bring It On follows Torrance and her cheerleading squad as they struggle to stand out in their upcoming competition, after learning their former team captain was stealing routines from an inner-city squad, the East Compton Clovers —an extremely woke commentary on cultural appropriation for a 2000s movie. Torrance allegedly falls for Missy’s brother, but she clearly has way more in common with Missy, and their connection seems much stronger. Hey, straight women who want to date their best friend’s brother because he’s just like their best friend but a man: You OK? Just date your best friend.

Bring It On also has multiple sequels, all of which are bad and irrelevant, so here’s my pitch: We pick up 18 years later when Kirsten Dunst and Eliza Dushku’s characters are married and coaching their daughter’s cheerleading squad, while also reinvigorating their sex life after nearly two decades together. It’s called Strap It On.

Speaking of completely unbelievable stories about friendship, this 1995 Christina Ricci-starring classic is unreasonably gay. This slice of life movie cuts back and forth between the lives of four best friends in present day (“now”) and in their childhood (“then”). Some basics: Rosie O’Donnell is in it — gay. It was written by I. Marlene King (who is gay), who also created Pretty Little Liars (gay), and was originally written with Ricci’s character, Roberta, as a lesbian, as the character was based on King herself.

Now, the movie itself has one extremely gay character, Chrissy, who is meant to just be prudish and sheltered as compared to her fellow hormonal pre-teens, but everything she says reads as a closeted cry for help. She’s the only one of her friends who’s never seen a penis, she’s the only one who’s not ready to kiss a boy, and she always blanches at any mention of kissing, sex, boys, or dating. I saw this movie for the first time this year, and I didn’t know the story, so I watched the entire movie believing that Chrissy’s storyline would end with her coming out. Unfortunately, that’s not what happened — she just remained prudish and, like, religious or some crap. Nineties kids deserve a gay Now and Then sequel, penned by the same gay screenwriter, starring the same cast: Now and Then and Gay Now.

Cadet Kelly is an extremely lesbian movie about a fun-loving, art school-type of bitch, Kelly (Hilary Duff), whose mother marries an ex-military officer and is forced to enroll in military school. There, she develops a bitter, competitive energy with her commanding officer Jennifer (Christy Carlson Romano), which most times just feels like they’re flirting. Similar to every other fucking story, like Sierra Burgess and Bring It On, they develop a real “friendly” bond (puke) and become best friends.

You’re telling me two girls at fucking military school, one of whom sleeps with a rainbow fucking blanket, falling in friendship-love while training with the goddamn DRILL team isn’t a lesbian story? Sometimes I feel like I’m living on a completely different planet than straight people. Anyway, Cadet Kelly 2: Jennifer’s Chamber of Secrets.