Out bisexual Stephanie Beatriz sat down with Vulture this week to talk Brooklyn Nine-Nine’s close call and how art imitates lifeespecially for her. The actress came out as queer in 2016, which inspired her character’s coming out storyline on the show.

For Beatriz, coming out was a slow process. She tells the reporter that she first realized she was into girls at a museuman early and innocuous outlet for seeing boobs. “My mom took us to see this Frida Kahlo exhibit at the Houston Museum of Art when I was, like, 11. And all I did was stare at the boobs. There were boobs everywhere.” For that reason, museums were her root.

“Museums were probably the root for me because it was free rein to stare at the beautiful bodies in all the paintings,” Beatriz says, quipping, “I was obsessed with the Roman era for a long time, and half the ladies had a tit out. Thanks, mom, for my art education/investigation into the world of bisexuality!”

The Latinx actress describes her coming out process as gradual, due in part to being in a “straight-passing” couplesomething that many bisexual people are confronted with. “I came out slowly. Here’s the thing: Some of the time, I’m in a couple that passes as straight,” she says. “I could choose to stay in that straight-passing world, and that would be fine, except it doesn’t feel authentic.”

Another factor in her prolonged coming out process was inner-family tension. She adds, “There was a long time, where I was like, ‘What is the point of stirring the pot with my family, especially if I don’t have someone that I really, really love that identifies as a woman to meet my parents?’”

Eventually, the 37-year-old actress came out to her family, then publicly, which her religious parents didn’t have the easiest time with. The Brooklyn Nine-Nine actress knows that her parents have seen every episode of her show, but they’ve never mentioned Rosa’s now-infamous coming out episode. However, she believes they’re doing their best.

After Beatriz came out publicly in 2016, the executive producer of Nine-Nine, Dan Goor, approached the actress about a similar bisexual storyline for her character. So, Rosa’s storyline has always been familiarat times parallelto Beatriz’s real life. “He called me and said, ‘I just want to be very sensitive about this, and I really want to hear your honest answer. Would you be open to us exploring a story where Rosa comes out as bisexual?’ and I was like, ‘Absolutely. Yes. I’m so excited! Yes! Yes! Yes!’” Beatriz says.

The writers even brought her in to speak on her own coming out process and stereotypes about bisexuality.

“There were a lot of lines we put in when Rosa came out to her parents that were things I really wanted to stress,” she tells Vulture. “Like the phrase, ‘Bisexuality’s not really a thing.’ ‘You’ll grow out of it.’ ‘It’s just a phase.’ ‘Well, you can still marry men, so there’s still a chance.’ Which is really fucking exhausting.”

Beatriz is engaged to a man and is monogamous, so she deals with bi-phobic remarks or misconceptions about her sexuality constantly.

“The realness is that for the rest of my life my sexual desires will include my gender and other genders,” she explains. “Just like when you marry someone, your sexual desire for other people just doesn’t drop away and disappear. You still see people, and you’re like, ‘Damn!’ even though you’re committed to one person.”

Beatriz revealed that it was important for her to ensure Rosa said the word bisexual. Not only did she want to keep Rosa from falling victim to harmful TV tropes like the “fucking villain,” but she often feels like bisexual TV characters are fluid. But the actress identifies as bisexual, and unfortunately, bi-erasure is still very real in today’s TV and film landscape, so she felt the label was imperative.

“Most of the time [bisexuals are] hypersexualized villains who get murdered,” she insists. “How awful. For those of us that identify that way, to be growing up and that be the only representation of ourselves on television? It feels like something you do have to keep secret, because what if that is some amoral part of you that you need to push down? Because where do you get your truth? You get it from television and media. So if your truth is not reflected anywhere, then do you exist? Or do you matter? Will you be able to have a happy life?”

Like many other LGBTQ people, Beatriz is tired of seeing only straight white people find happiness and success on TV. It’s tough to measure just how deep those life-long wounds go, and for QPOC like Beatriz, the intersections of race and sexuality can feel gutting.

“A lot of times when I was a kid, I just straight up wished I was white. I wished that I was white because it looked so easy and fun. They didn’t have the same problems,” she says. “But [my race and sexuality] have always been woven together in the fabric of who I am, and now more than ever, they feel publicly part of who I am. That people who identify with two things see me and feel like they are represented. Sometimes, it’s one of the two things, and sometimes it’s both. And I love that.”

This past weekend, the season finale of Brooklyn Nine-Nine aired on Fox, featuring a new romance between Rosa and Jane the Virgin star Gina Rodrigueza casting choice spurred on by Twitter. The Nine-Nine actress told EW that she’d love for Rodriguez to play her love interest. Soon after, Rodriguez responded that she wanted an audition. Beatriz confirms to Vulture that the casting was inspired by that interaction, and also reveals they’ve actually worked together before. 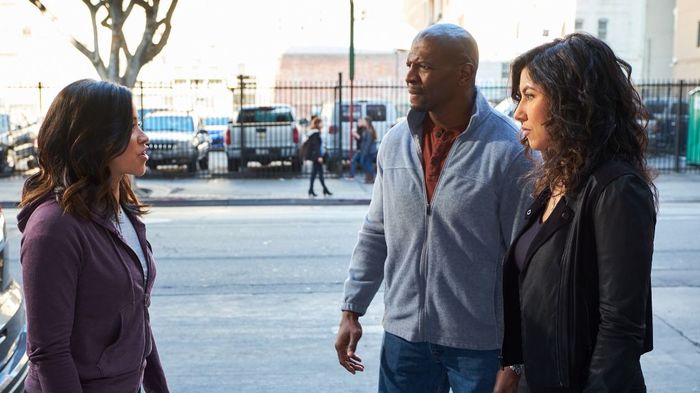 “The casting was heavily influenced by myself because we’re friends and the first thing I ever, ever, ever did on film was with her. It was this very small short, in 2008 or something, for the National Association of Latino Independent Producers,” she says. “It was called Super Chica, and it’s never been released.”

When the reporter expressed disappointment that the two actresses don’t kiss in the season finale, Beatriz echoed her sentiments, teasing, “[Next] season, I am going to hard-core push for that. Even if it’s not Gina, we need to see Rosa kiss a girl. I want to see the circle get completed.”

Next season, the hit detective comedy will move to NBC for Season 6.

“In Season 6,” Beatriz says, “I would like to see her kiss a girl on that screen.”