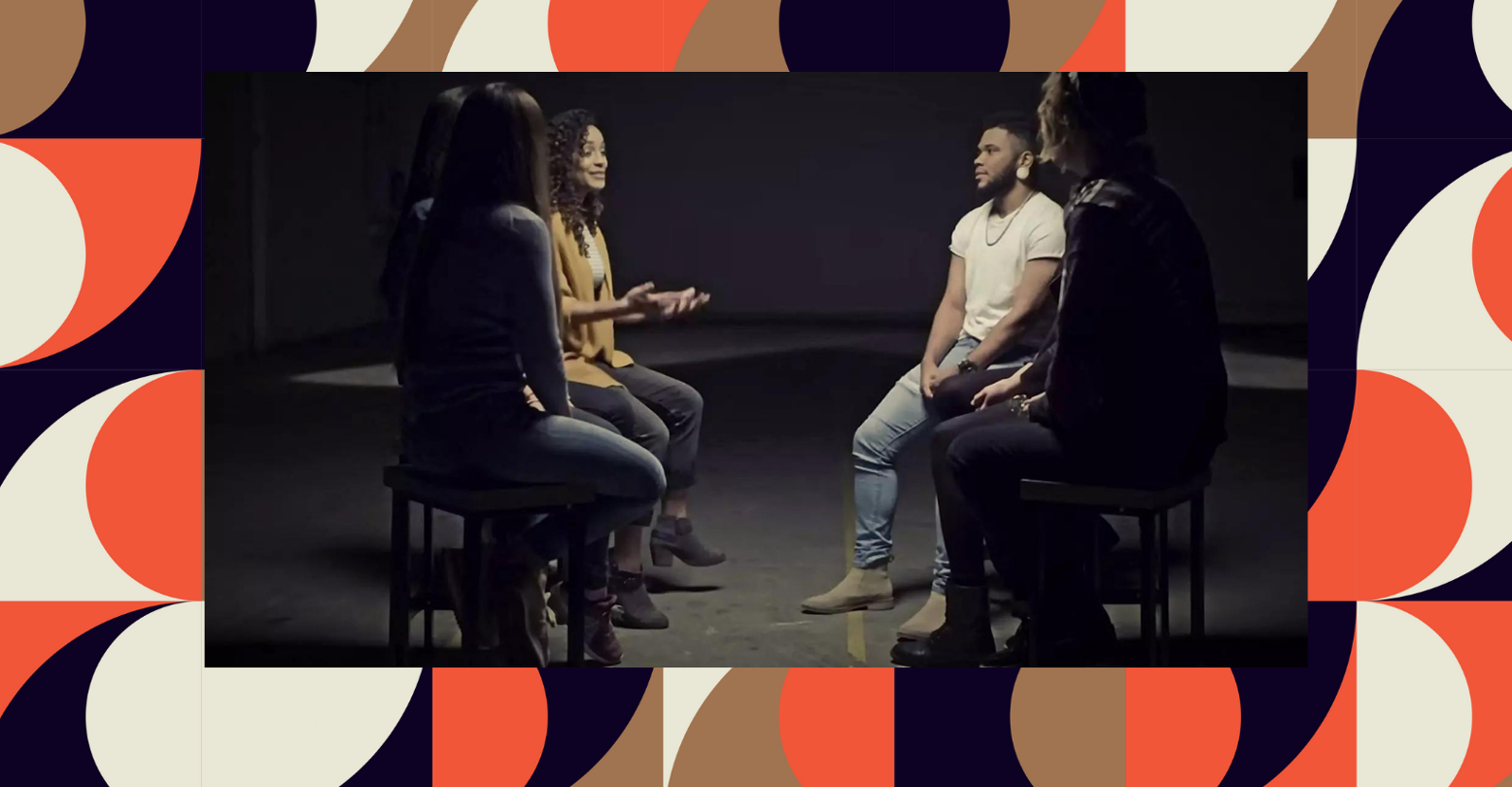 The lack of transmasc representation within the media is a telling sign of our own interpretations of masculinity within the queer community. There are sprinklings of trans masc experiences on TV, like Leo Sheng in L Word Generation and Brian Michael Smith in 9-1-1. A few personal social media accounts—like those of Schuyler Bailar, J Mase III, and Thomas Page McBee—give many needed lifelines for representation. But when it comes to discussions or opinions of trans masc people in everyday discourse, there remains an unnerving silence. One thing is certain: when it comes to introducing trans masc folks into discussions surrounding personal experiences, the setup is usually trans masc folx having to defend personalized forms of masculinity to an often-heteronormative dichotomy. Jubilee’s “Middle Ground” series—particularly the episode “Trans vs Conservative Men: Is Masculinity Disappearing in America?” is more of the same.

The episode, which aired in February, is akin to taping Thanksgiving dinner with the one relative you had Facebook beef with 3 years ago. Which is the point of most of the videos in the Youtube series Middle Ground, hosted by Jubliee Media, The premise of the series is to bring opposing sides together and answer obviously dividing questions. The challenge is to find common or similar ideologies somewhere throughout the heated and debated conversation. While this “Trans Men vs. Cis Conservatives” segment aims to accomplish the same goal of uniting divisive parties, not many episodes in the series are aimed at questioning personhood. Sure, there are differing opinion pieces like “Should Everyone Have to Cover Their Nipples?” and “Wall Street vs WallStreetBets”, but mixed in with the trivial are episodes like “Traditional vs. Trans: Are There More Than 2 Genders?” and “Do Trans Athletes Have an Unfair Advantage?” which challenge personhood instead of presenting opposing opinions. With a curation of varying visceral videos, one has to wonder if the click-baitiness of the content does any good. Particularly with the “Disappearing Masculinity” episode. Who is really the audience?

The show’s setup is akin to taping a Thanksgiving dinner with the one relative you had Facebook beef with 3 years ago.

Let’s start with the largest elephant in the room: trans adult actor Buck Angel—who recently came under fire on social media for claiming that “radical” trans activists are “indoctrinating” kids—is featured not only in this debate, but on other segments for Jubliee Media. While his introduction is discreet, it’s hard not to recognize the guy. Being classified as the first transman in mainstream porn, there’s an instant recognition at least amongst the queer community: which goes to show that the queer community probably isn’t supposed to be the audience for this. Angel has challenged nonbinary ideology, believing that biology determines a person’s gender. He has spoken out—both in interviews and on Jubilee—about his battle with the healthcare system as an older transman, the thing that, in part, has led him to believe in binary constructs. As a transman who has also undergone a hysterectomy to alleviate surprise cramping and pain, I understand his concern. However, what Buck Angel fails to understand is that he, along with the rest of the queer community, is asking for the same thing: holistic healthcare that addresses bodies and not checklists. Accepting binary constructs is what continues the reign of transphobic, cookie-cutter healthcare.

The kind of masculinity that’s forged within transmasc folx is self-curated.

If you are willing to sit through “Trans vs Conserative Men: Is Masculinity Disappearing in America?”, you’ll notice that the heteronormative standard is set pretty early. The cringiest moment from the segment? “If I saw you walking down the street, I wouldn’t think you were a man,” one conservative panelist says to a trans panelist. This one comment sums up the longest video in Jubliee’s Middle Ground Series. This video, along with some of the more recoiling videos in the series, still occurs within an unbalanced power dynamic. And once again, trans masc individuals are placed in the media spotlight only to have to prove their masculinity against a mythical hetero standard previously set.

Maybe the constant comparison to cisgender male standards is a driving force that keeps transmascs out of the sometimes painful spotlight of public opinion. The kind of masculinity that’s forged within transmasc folx is self-curated. Be it role models, media representations, or succumbing to negative expressions of masculinity, all have informed our expressions of masculinity, as have the actions and assumptions of cisgender males. The difference is that transmasc folx are told from the beginning of any kind of social or medical transition that we are a lesser version of masculinity. In an effort to maintain any kind of masculine identity, we often stay quiet, trying to survive spaces that tolerate our existence, at best.

Along with the constant comparison to the cis-male “ideal,” transmascs are often kept in this position due to the binary gender constructs we all have to battle as queer people. For example, emotions within a binary construct are reserved for the feminine. If it’s not anger, rage, or some other specifically masculine-identified reaction, it is by default feminine. With our aforementioned obsession with hetero-ideals, where does this leave us? Lost, often, in a loop of not being masculine enough for the hetero world, and ignored or infantalized by the queer world.

But the real truth is something transmascs knew from the start: that masculinity is an illusion, and we are masters of it. Transmen and transmasc folx are harbingers of patriarchal masculinity deconstruction. We take the dirty word of masculinity, dust it off, and put it on with our own interpretations. Often enough, these expressions look kindred (so many flannel shirts and cargo shorts in the mid ’00s.) And just like with cisgender males, transmascs take in all forms of masculinity—both toxic and wholesome—and wear them proudly. If get it wrong, we end up being yet another stereotype of unhinged masculinity. But as people who have already studied the gender spectrum, we’re more willing to redefine our masculinity. We defined it once before, why not again?

Even with the many problems (and questionable intent) of “Trans vs Conserative Men” and the Middle Ground Series as a whole, there is still validity in having a dialogue. There is plenty of common ground between the two groups. No spoilers here, but the commonalities do prove one solid point: that we all have our own privileges that we often don’t see. Sometimes these privileges can be simply sharing and reflecting back similar experiences or ideologies, both positive and negative.

However you might feel about the content of the debate, these transmascs deserve their flowers. With little representation of queer masculinity out there, it takes a lot of guts to challenge the status quo in an away-from-home venue. “Trans vs Conserative Men” gives voice to stories and opinions of a group within our queer community that are not heard, even if it’s in the context of the already-lost battle of “Who’s Man Enough?”♦