When the finalists for this year’s CFDA/Vogue Fashion Fund were announced, it was big news. Not only because of the presumed influence of the program which is an indicator of which emerging American brands are of note but because of the diversity of the brands chosen.

Of the ten, four were labels headed by black designers and three were led exclusively by women. Monday night Telfar Clemens, the Liberian-American designer from Queens, New York took home the top prize with Becca McCharren-Tran, founder of the inclusive swim-based brand Chromat, tapped as one of two runners-up.

Clemens, however, is not a new designer by any stretch.

Having founded his label in 2005, he passed that benchmark long ago. Neither is he buzzy in the way the word is typically used in the context of this competition. His success has been predicated on over 12 years of putting in the hard work, working in spaces long before the rest of the industry had caught on and continually progressing from there.

This isn’t a “trendy” or timely upstart. The fact that the “establishment” has finally caught on is just a cherry on top. But let’s be clear: 2017 has been a big year for Telfar as a brand.

When Solange presented herself as a performance artist with her private show at the Guggenheim this year, she chose Telfar. To celebrate their 95th anniversary, White Castle wanted to redesign their uniforms, they chose Telfar. Clemens bet on himself just last month when he expanded the label to childrenswear. And even last year, when the Berlin Biennale needed someone to take over, it chose Telfar. There is a clear demand. 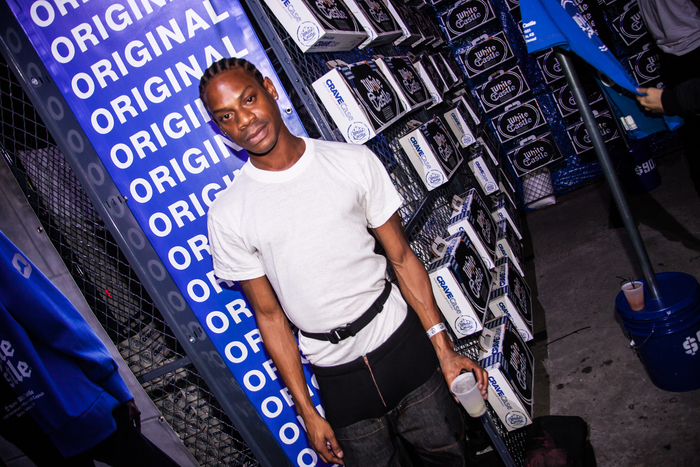 The Telfar aesthetic is one of experimentation. Since its beginnings, long before it became an industry trend-turned-staple, Clemens staked his name in the genderless sphere. But that was quickly discovered to be only an aspect of the brand.

The designer was also interested in deconstructing ideas and notions and splicing them back together, reworking commonly understood beliefs about clothing in pursuit of newness. To cap it off, he had no particular allegiances to the way fashion dictated that success was to be had. He made what he wanted to, showed it how he wanted to and seemingly didn’t care if people didn’t understand.

I’ve spoken to Clemens on a few occasions and each time it’s clear that he knows he’s operating on the cutting edge of fashion, exploring ideas before the rest of the industry catches up. But such is the legacy of queer men particularly those of color.

“No one is ever ready for a thing that I would put out when I put it out,” he told me when I interviewed him for Vice once. “And that’s cool for me, but it’s like two years from now, that’s popular. And it’s not necessarily popular based on me, but it’s just that now people are ready for it.” That idea mirrors one that Vivacious believes in, saying that gay is an acronym for “generations ahead of yesterday.”

“To me, it’s not an issue, it’s an advantage,” Clemens continued. “It’s like I could put out something now that I put out in 2009 and it will sell, but the people who follow me are going to know I did it already.” And so, he presses on, leading the charge.

Currently, the designer spends half the year in China working with a design team and studio he has built there over the past two years and the rest of the year in his New York studio. The designs that emerge from those studios can be found in his recent exclusive capsule collection for Century 21 as well as on the backs of the likes of Kelela, Big Sean, and Joey Badass, as well as more than a few of your favorite New York nightlife queers.

But with that $400,000 cash prize for winning the Fashion Fund and the industry finally behind him, it’s likely you’re about to see a whole lot more of the brand.

Well fuck me up sis.