In a scene from 30 Rock, Liz Lemon (Tina Fey), while giving professional advice to new page Hazel Wassername (Kristen Schaal) laments the control and power men exert over women, even when just looking at women. Hazel mentions that Kenneth undressed her “with his eyes” and “had his way with [me] with his eyes.” Liz scoffs, “Ugh, the male gaze.” In solidarity, Hazel replies, “Yeah, they’re all a bunch of gays.”

This little malapropistic joke gets at the heart of both a broader discussion of what’s going on in film and TV and, more specifically, informs a key question in a new repertory program showing at Film Society of Lincoln Center in New York for two weeks. Called The Female Gaze, the 36-film series — which includes modern classics like Eternal Sunshine of the Spotless Mind, Chantal Akerman’s masterpiece Jeanne Dielman, 23, quai du Commerce, 1080 Bruxelles; international essentials like Wim Wenders’ 3D dance documentary Pina and Claire Denis’ postcolonial drama 35 Shots of Rum; and rarely seen gems like La Captive and The Intruder — sets out to examine what role the female cinematographer has in authoring and shaping the gaze as audiences see it. 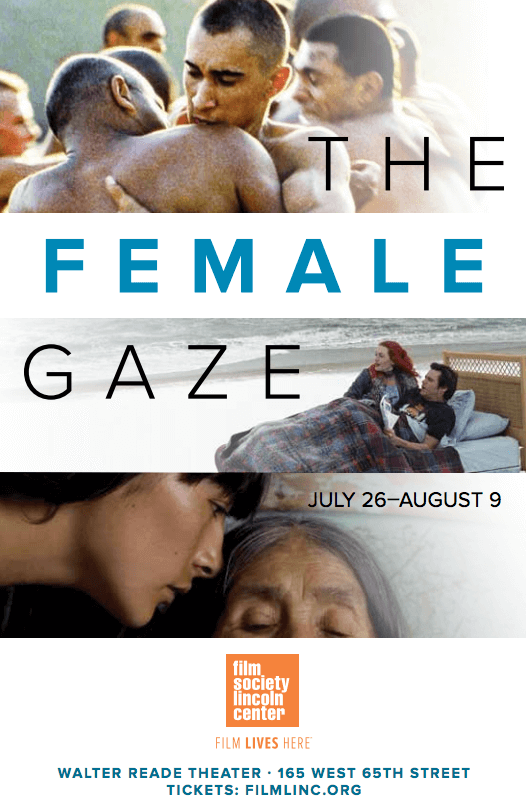 Laura Mulvey’s work of film theory — which asserted, broadly, that the camera is often gendered male and views its subjects as female, sometimes divorcing them of agency and rendering them objects — has long been a part of mainstream and popular conversations about film and television. When you talk about Westworld or Game of Thrones‘ use of nudity, or Riverdale‘s cruising scene; when you talk about the way bodies are filmed in Wonder Woman or your garden variety shirtless superhero; you’re talking about the gaze, and the relationship between subject and object, audience and author, production and consumption of images.

One of the key ideas explored in this series is how nonnormative desire is portrayed; many of the films in the program can be classified as queer cinema, from Denis’ Beau Travail, Bertrand Bonello’s House of Tolerance, Tom Kalin’s Leopold and Loeb drama Swoon, Alain Guiraudie’s neo-Hitchcockian cruising mystery Stranger By the Lake, Todd Haynes’ Bowie/Reed inspired cinematic rhapsody Velvet Goldmine, to a special preview of the upcoming The Miseducation of Cameron Post starring Sasha Lane and Chloe Grace Moretz, and others. Mulvey laid down crucial work in the advancement of film studies, and her ideas have been contested and expanded upon since original publication in 1975; queerness, in particular, is a lens that can explore the fluidity of the camera and its audience. What kind of images are being consumed and what are the implications when it’s not a straight (white) man aiding in the creation of those queer images?

As we continue to seek equity and parity within the film industry, and continue to question and challenge the norms through which we understand sex and power (and the abuse of such), Film Society’s series is the perfect summer programming. I spoke with program co-curator Maddie Whittle about the origins of this series, female cinematographers and desire on screen, and what happens when there’s a paradox of authorship over a movie.

Could you tell me the origins of this program? For those not in the know, would you mind summarizing Laura Mulvey’s theory of the male gaze?

The vision behind this program really originated with my colleague Florence Almozini, our Associate Director of Programming. To very crudely paraphrase Laura Mulvey — whose concept of the male gaze as put forward in the essay “Visual Pleasure and Narrative Cinema,” published in 1975 remains one of the most enduring and generative concepts in feminist film theory — the medium of film, and the aesthetic traditions of American cinema in particular, can be analyzed in terms of its formal tendency to privilege, cater to, and draw on the perspective of male subjects moving through the world as spectators of the objectified female body. It’s arguably not a coincidence, then, that Hollywood, an enormous culture industry whose product is a creative medium that’s dominated by the influence of this masculine, desiring form of “looking,” should be at the forefront of the revelations and conversations surfacing in the tide of the #MeToo movement, and an important site of introspection and intervention among professionals in the industry.

I think the film programming community generally has been especially interested this year in engaging with the contributions of women in that industry, as a corrective measure and a way of bringing to light their work and vision where those things might be structurally overlooked. We took a special interest in female cinematographers in part because of the uniquely intimate and grounded relationship between their craft and the abstract idea of a “gaze,” and in part because, as Rachel Morrison’s groundbreaking Oscar nomination emphasized earlier this year, cinematography, perhaps more than any other filmmaking profession, has historically been a field where women are both underrepresented and under-recognized.

Add to that the inciting motivation that the American Society of Cinematographers turns 100 next year, and you get a series dedicated to the camerawork of great women DPs.

What was your research process like? Did you and the other curators envision the series with a particular arc in terms of time or region or politics?

Research tends to be a pretty organic and improvisatory process for our programming team, and this series was no different. Because the program was really Florence’s brainchild, the development of the lineup was largely a matter of brainstorming films that we love that were shot by a woman DP and then culling that list according to our tastes and our desire to craft a series spanning decades, styles, genres, and national cinemas.

The series is not organized chronologically or by region, but certain threads emerged fairly early on: for instance, the French film industry has historically fostered greater gender diversity in the field of cinematography than American cinema has, so you’ll see a disproportionately high number of French titles in the lineup that reflect this tradition. Likewise, it’s only been in the past few decades that women have had greater professional opportunities to rise in the field, so many of the films we’re featuring were made in the last 30 years, and the oldest was made in 1976.

I know a lot of curatorial work is not unlike detective work. What were some of the obstacles you encountered obtaining prints of films?

Just like with any series, some of our programming choices were dictated by the availability (or unavailability) of a screenable print or DCP for titles we were interested in screening. Occasionally, a film that we would have liked to screen was unavailable, whether because there were no prints in circulation or because the rights to the film were changing hands and legally tied up. In those cases, we would typically look into alternative titles shot by the DP in question, working with the same director if possible. However, we were very lucky to be able to draw upon some great archival collections to borrow beautiful 35mm prints of a number of titles, including UCLA and the Institut Francais. 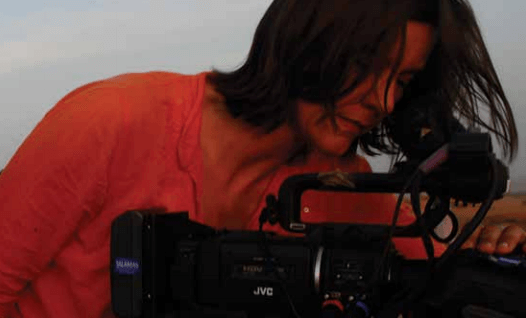 Many films in the program can be classified as falling within queer cinema, such as Stranger By the Lake, Velvet Goldmine, and Beau Travail. (Other queer films such as Weekend, Lilting, [both Ula Pontikos] and Saint Laurent [Josée Deshaies] also had female DPs.) Do you think there is something about the female gaze that allows access to non-normative portrayals of desire or eroticism?

This is a great question, and one which we’re certainly hoping our series provides an opportunity to explore, even if we don’t necessarily have a clear answer. I will say that one of Florence’s driving concerns in conceiving a series around the “female gaze” was to interrogate the ways in which women cinematographers treat the human body, both male and female, and to pay special attention to films that take a special interest in bodies.

Perhaps unsurprisingly, when we set out to look at movies that depart from the heteronormative and patriarchal tradition of the “male gaze,” we came up with a whole host of examples of other kinds of sexualized gazes, including examples drawn from some of the best works of queer cinema. Since queer cinema as an aesthetic, narrative, and generic category often concerns itself with the body in one way or another, and in a way that is often pointedly not heteronormative or patriarchal, it presented us with a lot of great options.

With that in mind, were/are there any films in the series or up for consideration that implied a kind of struggle or paradox with gendered authorship, if you will, in terms of how they approached bodies, gestures, violence, etc?

One of my favorite titles to talk about in the series is The Neon Demon, which was directed by a man — Nicolas Winding Refn — but shot by a woman, Natasha Braier, and which was very polarizing among critics when it was released in 2016. It’s a movie that’s very interested in what it means to look at, and consume images of, women’s bodies, specifically in the context of Hollywood and the fashion industry — both cultures that commodify youth, glamour, and beauty. It’s a movie about the industry, and lays bare some of the conditions that incubated all the abuses we’ve seen come to light over the last year with #MeToo. In many ways I’d argue it’s a feminist text, but in spite of its having a female DP, two female co-screenwriters, and a largely female cast, it’s generally seen as being authored — directed and co-written — by a man, and the movie certainly traffics in glamorized, highly sexualized images of young women’s bodies. This tells us something about how we think about authorship, consumption, and subjectivity in narrative cinema, but drawing any clear “moral” or conclusion from it is a complicated task.

Do you have a favorite film in the series? Any film you wish you could have included but, for whatever reason, could not be?

It’s impossibly hard to pick a single favorite, but I have a special fondness for the wildly visionary and playful subversiveness of Holy Motors, and I also want to encourage audiences to revisit the generational darling Eternal Sunshine of the Spotless Mind alongside these other films, through the lens of the female gaze. We had a much longer list of titles that we ultimately had to pare down, mostly just due to scheduling constraints. We would have loved to extend the series by another two weeks.

In one instance, we were lucky: a title that we had considered programming, Gimme Shelter, is being screened at FSLC in an unrelated standalone event on July 31 that overlaps with our series, and cinematographer Joan Churchill will be in attendance for both. We ended up programming another one of her films, Aileen: Life and Death of a Serial Killer, in the Female Gaze series proper.

What was the most surprising thing you learned while assembling the program?

Before embarking on the process of programming this series, I’d never had an occasion to isolate a list of films shot by women. Once we began, I was thrilled to realize just how wide and deep the influence of these cinematographers has been, over a relatively short time in film history. It’s not surprising that such talented women exist and have been energetically forging a path in the field, but given the disparity in the recognition they’ve received relative to their (equally deserving) male counterparts, it became very clear very quickly that the time for an intervention was past due.

The Female Gaze, curated by Florence Almozini, Tyler Wilson, and Madeline Whittle, a series spotlighting female cinematographers, begins at Film Society at Lincoln Center today and runs through August 9th. You can purchase tickets and see the full schedule on their website.