In an era of social media phenoms and self-made celebrities, few possess the originality to stand out from the masses. A rare and refreshing embodiment of the modern bon vivant has taken over a cult subset of the internet. Inspiring some of today’s queer budding artists, LA’s newest muse goes by a single name: Freckle.

Having recently accumulated a loyal following, Freckle is most known for her role in the delightfully entertaining and intersectional web series, The Gay and Wondrous Life of Caleb Gallo. Part of a diverse group of characters and their progressively interwoven relationships, her witty repartee is the backbone of the talented ensemble. Serving hilarious one-liners with a perfectly deadpan delivery, she’s recently inspired memes all over the internet.

“I think people saw authenticity,” she says. “I think people responded to it positively because ultimately, it is positive and there’s nothing about it that is grotesque or wrong or indecent. So, I had this character, Freckle that I had been performing around town at Akbar and clubs, opening for bands as Freckle, kind of just this vaudeville, smoky, chanteuse, cortisen concubine, you know, mistress of the dark, Silver Lake lady boy.”

An alum of the Los Angeles County High School for the Arts, her education and interests mostly center around music. Having befriended Kesha and the Haim sisters at an early age, she spent much of her time soaking in performances from backstage at Spaceland, Satellite, and Echo. A regular performer at various venues around town, she also frequently graces followers with brief performances via Instagram videos and stories, mostly covers of gay icons like Judy Garland and Liza Minelli.

Shortly after her time at LACHSA, she met Brian Jordan Alvarez at a USC party. Their friendship was forged on a mutual interest in performing arts. After pushing Alvarez to channel his talent through some of the hilarious short videos he’s become known for, like What Actually Happens When Gay Guys See Other Gay Guys and Straight People Aren’t Around, she collaborated with him on the video, When Your Gender Fluid Friend Gets More Attention from Straight Guys Than You. Soon, their friendship inspired one of the central relationships in Caleb Gallo.

The product of Jason Greene, Freckle was developed as a character over the past decade, subsequently influencing Alvarez and other artists. Inspired partially by her grandmother’s classy, feminine demeanor and the pearls she left Freckle, the rest was inspired by her other grandmother’s “boozy, floozy” personality. She recalls a pure Freckle moment of lounging in furs, sequins, and silk chiffon slips around her apartment, a Silver Lake studio she refers to as her palace. But the character has evolved into more of a personal identity for the performer, a trans person of color.

“It’s me,” she says. “It’s an image. It’s my artwork. I am the vessel, I am the vehicle, I am the canvas. It’s my dreams. It’s my projections. It’s my insecurities. It’s my vulnerabilities. It’s my flaws. If I could just rip the Band-Aid off and show the good, the bad, and the ugly, that’s what I aspire to do.”

In a rare opportunity, one of Freckle’s recent roles was that of a trans waitress named Evelyn. The film entitled Anything attracted a good deal of controversy as it featured cis actor, Matt Bomer in the lead role of a trans woman named Freda Von Rhenburg. Although Freckle understands some of the points made by people like Jen Richards about the need for trans representation, she had a more diplomatic response to the issue.

“The film wouldn’t have been made if it wasn’t for Matt Bomer doing the part and having a name to at least get the story out there,” she says. “It’s not like there are five more films being made with trans leads this year. It’s not like you stopped this film, and now every trans actress is going to get a role next year. That’s just not the reality.”

Not one to get easily offended, Freckle considers herself a strong person. She’s more adept to an open dialogue, as opposed to the outrage culture that seems to run rampant today. As a performer, she finds it creatively stifling.

“In these dark times, I think it’s all the more reason to have a sense of humor and to laugh and to smile,” she says. “And I know somebody can say this isn’t a laughing matter. Well laughing is how we heal and laughing comes in every culture around the entire world, probably other planets too. It’s a cathartic experience that the body has. And I want to contribute to laughter. I want to make the world laugh, despite shit burning down.”

It’s laughter that’s ignited her friendship and creative relationship with Grizzly Bear lead singer, Ed Droste. About a year ago, she caught Droste’s attention when Caleb Gallo started picking up traction. It was kismet that he ended up at an intimate gathering that night at her apartment. Over the next few months, they casually ran into each other at bars and parties in East Hollywood.

One night, after a random encounter at a 7-Eleven on Silver Lake Blvd, the two took a walk and quickly became friends. Although Freckle admits she’d never heard of Grizzly Bear, a connection naturally developed. After the death of her father, Droste became a big source of support. 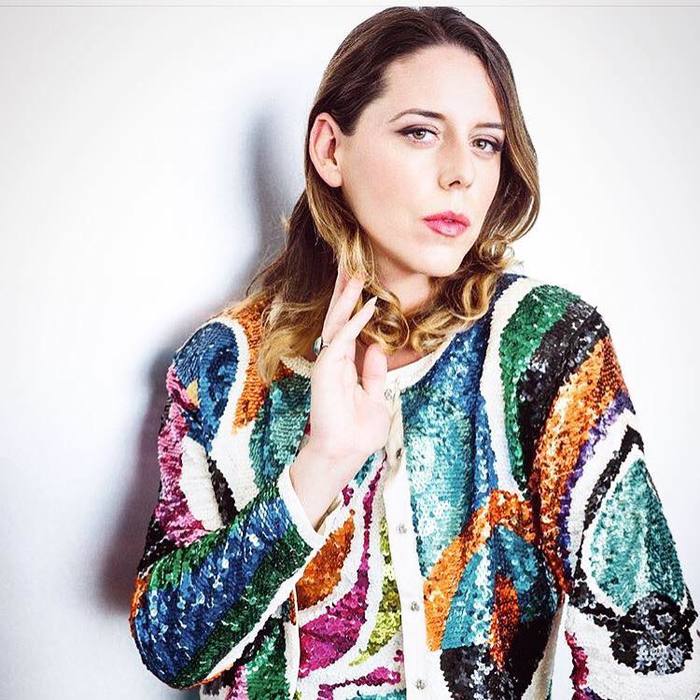 “We just became fast friends,” she says. “Similar senses of humor, different tastes in music because I’m not into the indie stuff. I like old jazz. But we find our connection somehow, through laughter I think.”

It only made sense that Droste would cast Freckle in one of his videos. He did just that for the visual accompaniment of “Losing All Sense” from his latest album, Painted Ruins. The two combined their own aesthetics, which resulted in Freckle playing a lounge singer alongside Busy Philipps, who plays an unhappy woman on what appears to be a Real Housewives-esque reality show. Directed by Cody Critcheloe, the video culminates with a strange ending that utilizes Freckle as a unique video vixen.

“I knew I wanted Freckle being a lounge singer, channeling my angst,” Droste says of the video. “And somehow this magic happened. I remember Cody asking, ‘What do you love?’ And I said Heathers and Mulholland Drive.”

Los Angeles is a city of artists and muses, and Freckle is a rare product of the Hollywood machine. Her career continues to gain traction, with roles in season two of Search Party on TBS and Call Your Father, an upcoming short film from writer/director, Jordan Firstman. As her following steadily grows, she’s embraced her role as a muse to the city’s many artists.