By this time last year, Mackenzie Scott had just put out her third and most adventurous album.

A well-tooled, urgent, and provocative record, Three Futures seemed a year ago to be a critical and artistic success. Then, this past April, Scott received some unexpected news: Her label, 4AD, had decided to drop her from a three-album contract, citing inadequate sales of her new record. “I wish them all the best,” she wrote on Twitter at the time. “Also, fuck the music industry.”

As Torres, she had already established a guitar-based vernacular across two records, 2013’s folky Torres and the heavier 2015 release Sprinter, which integrated moments of playful art rock and blistering neo-grunge. Three Futures changed her palette. Mixed in with her wiry, bright guitar lines were drum machine patterns and queasy turns of synthesizer—elements inspired by electronic music and krautrock that buoyed the knotty questions of desire she floated in her lyrics: What is it to have a body, and what does it mean to engage with the physicality of others?

A series of music videos accompanied the album, making visual the themes of queer love and desire that subtly inflected Torres’s former work. Carefully parse the lyrics to “A Proper Polish Welcome,” off of Sprinter, and a lesbian encounter emerges delicately couched in imagery borrowed from the biblical tale of Noah’s Ark: “Rocking and holy, we came two by two.”

In the video for Three Futures’ “Skim,” Scott wears a suit, brandishes an electric guitar, and toys with other women’s bodies, her gaze fixed defiantly on the camera. The video for the album’s title track casts her as three distinctly costumed characters; tripled, she has sex with herself. The cover of Three Futures, set in the same ochre-tinged house as the videos, shows Scott (wo)manspreading in Chelsea boots on a horrible couch while a woman, seen reflected in a mirror, dances before her wearing nothing but pantyhose.

A complex power dynamic plays through these images. Scott is the more masculine of the two figures in “Skim” and on the album’s cover, but she hasn’t entirely shed all her feminine signifiers. Her hair is long, and she’s topless underneath her blazer. She stands in two places at once as both the desirer and the desired, glitching the heterosexual erotics that traditionally accompany rock music. The camp and the sleaze of this visual universe, created with help from director Ashley Connor, let Torres complicate the well-worn role of the rock star draped in naked women, putting a sapphic twist on a misogynistic trope.

Regarding her personal identity, Scott tells INTO, “I’ve never been compelled to self-identify as any particular gender or sexual orientation. I have nothing to hide. You can look at what I choose to share with the public and see how I live. I just don’t care about gender or sexuality and I don’t think they’re interesting conversations, so I prefer to do more showing and less telling.”

For two weeks after the announcement, Scott withdrew from her songwriting process.

“I literally did not pick up a pen or open my computer for two weeks,” she tells me now over the phone from her home in Brooklyn. “It was kind of crushing. I had a come-to-Jesus moment. ‘Is this the industry that I was actually meant to put myself through while I’m here on this earth?’ I did question that for a bit.”

But, after what she calls “a solid pity party,” she found herself drawn back to her music. “I had a total change of heart. I was like, ‘Actually, I’m fucking fine.’ I really switched gears, which is how I am. That comes naturally to me, that pivot,” she says. “When I’m in a position of powerlessness or at least one that feels like powerlessness, my superpower is the songs that I write. It is a very neat way to give myself the feeling of having the last word on anything.” 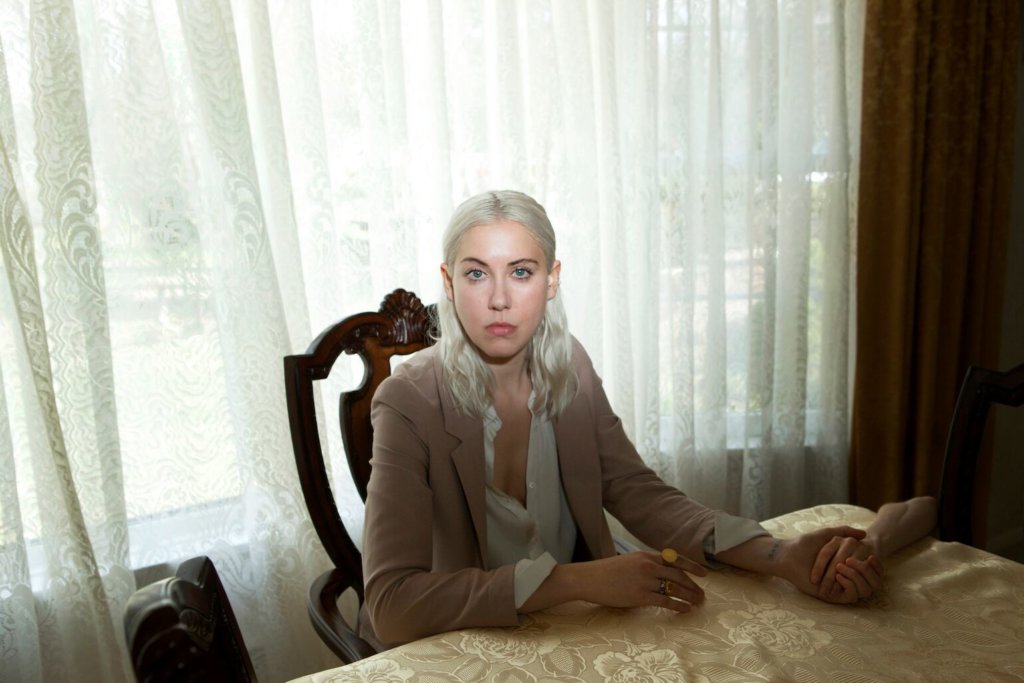 Torres had self-released her debut album back in 2013; working without a label was not new to her. She still had a Bandcamp account, and by July, she had offered a new song, “Gracious Day,” for sale. Sparse and slicked over with tape hiss, it’s an acoustic track that calls back to the love songs on Torres. While she plumbed the lower edge of her range throughout Three Futures, toying with the way certain voicings can connote different gender positions (the way she pronounces “I’m more of an ass man” on “Righteous Woman” is a treat), she arcs up into her falsetto on “Gracious Day.” She recorded the track at home, “just myself and my guitar on my laptop.” It begins with a surprisingly intimate voicemail—”I left my coat at your house. I’m wearing your perfume,” says a woman’s voice—and as Scott sings you can hear the space of her apartment folding around her. She sounds perfectly at home as she beckons, “I don’t want you going home anymore/I want you coming home.”

“I’m highly attuned to the fact that what I really need right now, what everyone needs right now, is connection,” Scott tells INTO. “It’s not something that I’ve ever really allowed myself too much of. I mean, I’m not a recluse. I have friends, I go out. But I’m a very private person, and I spend a whole lot of time alone. I think in the moment that I decided to record that song that way, I was desperate for some immediacy.”

In September, Scott put up another new song on Patreon, unlockable by way of a one-dollar donation. More upbeat and thornier than “Gracious Day,” “Two of Everything” sees Scott gritting her teeth over a love triangle. “What was it that made her think she could have two of everything?/One of you and one of me/Forever in the in-between,” she sings against the anxious patter of a drum machine.

Torres’s Patreon supporters have access to exclusive content such as the original demo version of “Skim,” the first single from her record Three Futures; a photo of a personal handwritten diary entry; a cover of “Wandering Star” by Porthishead, one of her favorite bands; and more personal work, such as a thank you video made for her Patrons.

Patreon, a subscription service that acts like a monthly recurring Kickstarter donation, has emerged in recent years as one of the more popular options for self-employed artists subsisting by selling their wares online. Freelance journalists use it alongside podcast producers, painters, and musicians. In the United States, where arts grants are few and far between and making a living selling music is one of the most precarious professions among the precariat, crowdfunding services like Patreon can act as a much-needed stopgap.

It’s not a replacement for a record company’s more comprehensive infrastructure, but it can help carry musicians across periods of financial uncertainty. Scott doesn’t love the idea of crowdfunding, but she’s content to use Patreon to share demos and covers with fans who offer a margin of financial support.

Scott doesn’t love the idea of crowdfunding, but she’s content to use Patreon to share demos and covers with fans who offer a margin of financial support.

As a musician in 2018, “you’re not just selling records,” she says. “You’re selling a persona. You’re selling visual art, photographs, videos, you’re selling it all. It’s very hard to know, especially right now, what the best way to do that is.” She’d love to play more shows — she just played a rooftop in New York and a campground in Texas — but the market for touring musicians is oversaturated, given that it’s often easier to make a living selling concert tickets than records. She’d love to make more music videos, but the process is resource-intensive. She says she’s interested in doing a little acting sometime, “off-Broadway, or in a cool movie.”

Mostly, what Scott wants right now is the freedom to make music alongside the freedom to survive. “I would love to just do the basics right now,” she says. “Make a living and keep a home and try and be well while we sit through this major hell of a presidency. Bite our nails hoping that climate change is not really as nigh as it seems. Ideally, I would like to be well. I have big dreams, but right now the big dream is to have my needs met.”

2018 has been a creatively fruitful year for Scott, but it has also been a personally taxing one — an uneasy pairing. The songs are there; the infrastructure for distributing them is hazier. She feels free to make the music she wants to make, but she’s making it in an increasingly precarious environment. The music industry does not favor musicians. Late capitalism continues its steady march to the limits of exploitation, and artists like Torres keep writing songs.

She has written her next album, is about to take it to the studio, and plans to release it in the first half of 2019. The record, she says, furthers the lyrical themes that abounded on Three Futures — music about bodies and desire and pleasure never runs dry — but she expects it to sound warmer, rawer, and less clinical.

“I’ll be going for the jugular more with the new record,” she says. Though the hellish presidency tends to seep into just about everyone’s psychological state, her fourth record won’t in any way respond to contemporary politics.

“I only write music when I feel like I’m about to explode with whatever truth-bomb I need to unleash, and usually it only ever has to do with what’s going on in my interior world,” she says. “This new album will be a love album. Our current administration doesn’t deserve music, even combative music. It deserves eternal condemnation where there is no music and no light.”

If Three Futures was a yellow house in rural America, then Torres’s fourth album will be “a botanical garden,” she says. “It’s going to be lush.”

It’s easy to imagine Torres forging an oasis from scarcity. That’s her alchemy: A vacancy becomes a window, and once she sees it she doesn’t hesitate to climb through. Parting ways with her label didn’t alter her path.

“My world did not end. A record label is just a record label,” she says. “I’m so ready to move forward.”