North Morgan does not want to be anyone’s role model, nor does he endorse having one in the first place. He says as much — multiple times — to the crowd of fans that has gathered at the NYU bookstore in Manhattan to hear him talk about and read from Into?, his third novel since he went from blogger to published author with 2011’s Exit Through the Wound. It’s a question brought up by both the event moderator and one of his fans, both seeming to search for answers as to how his success has changed the way he sees himself in relation to his readers.

The idea of putting another person on a pedestal is a phenomenon Morgan describes as both culturally American and a recipe for disappointment. “I like inspiring people or helping them understand something,” he explains when talking about the effect of his work on others. “I just can’t think of a single person as a perfect role model.”

Idolized or not, Morgan’s acerbic, forthright style depicting life as a gay man has earned fans and praise, offering an alternately hopeless and touching look into cycles of self-destructive behavior and internalized longing. His physical appearance — muscular, square-jawed, blue-eyed — has garnered a fair amount of attention, too, and Morgan’s social media presence is something of a companion piece to his work dating back to his earliest writing, which came out of emails he sent to his straight friends documenting his journey through the gay culture of London. Those emails would eventually become London Preppy, the daily blog chronicling and then sensationalizing a world of parties, drugs, and casual sex. London Preppy would also be the incubator for his work as a novelist.

Photos of Morgan — often shirtless or in attire that suggests he knows his way around a Ralph Lauren store — come paired with ironic commentary or self-deprecating humor. In one post, Morgan stands in front of a mirror with his shirt unbuttoned and parted to reveal a chiseled torso with the caption, “Exhibiting my generation’s psychopathic tendencies and the degradation of the human race by taking another selfie. Previous generations of humans were perfectly fine, of course, keeping slaves, going on world wars, not allowing women to vote, etc.” Where countless other social media personalities would lean in with some combination of a toothy smile, product placement, or reference to Phillippians 4:13, Morgan turns mercilessly on his own hunky, bro’d out physicality.

The end result, on social media and in Morgan’s writing, is a juxtaposition of biting self-awareness and shallow, empty fulfillment: the sensitive soul who loves unconventional music and existentialist literature, but can’t be bothered to go on an art walk and instead settles for a trip to the gay beach. Soho House and Coachella are name-dropped next to Ernesto Sabato and Jean-Paul Sartre.

The details of the protagonists Morgan writes about are often informed by his real life, also a holdover from the London Preppy days. Morgan has developed his fictional characters beyond his own personality, however, and is careful to put some distance between himself and his creations. It’s a lesson learned from blogging in character every day for two years; eventually, the character and his moods bled over into reality, and the mental energy required of Morgan was too damaging. That distance hasn’t kept him from some very good (and very bad) interactions with fans and followers, who can identify so strongly with the character of North Morgan that they feel they know the real man behind it.

At the event and in our conversation, Morgan makes references to the cultural philosophy of metamodernism, a means of interpreting culture in which “basically you oscillate wildly between being very, very honest and upfront and also having a character that’s very cynical.”

As examples, he offers the performance art of Shia LaBeouf, as well as the manufactured persona of Lana Del Rey.

“She produces music through a character; Lana Del Rey is a construct,” he explains. “But at the same time there’s a lot of truth, and vulnerability, and openness to what she does.”

Metamodernism as an aesthetic can also be applied to social media at large, and the ambiguity about where the line exists between performance and reality — if it even exists at all. That Morgan embodies this publicly is perhaps what draws people to him, but his private life is another thing entirely.

The child of Greek parents, Morgan grew up in Athens and later London, moving to Los Angeles to be with a former boyfriend. Coming out fully was a process that took time; his father didn’t find out until 10 years after friends and other family members did. It was during this early years writing London Preppy that Morgan’s distinctive style would take shape: dry retellings of excess, prescription drugs namedropped with specific dosages, and a soundtrack of songs plucked from wide-ranging genres and a selection of books that accented, dulled, or mocked the moments they co-occupied:

“On the tube on the way home, I’m reading The Bell Jar by Sylvia Plath conscious that maybe somebody (a guy, a girl, I’m not fussy) might see this, fall in love with me, walk up to me and kiss me suddenly, hard, before getting off at the next stop without having said a word. This doesn’t happen in the five stops between work and home, so I give up and get off.” 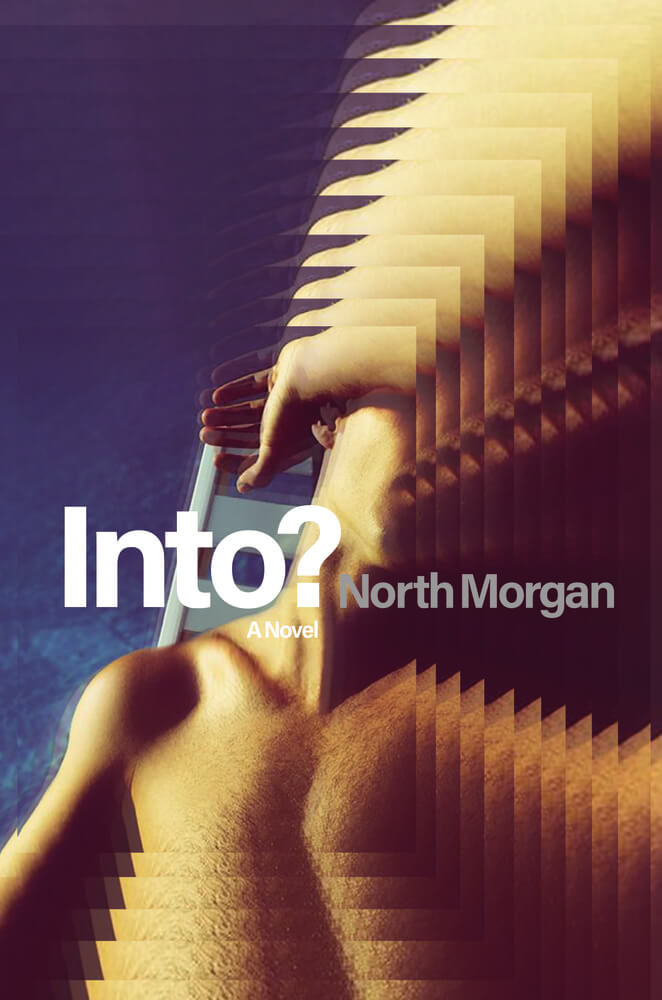 The blog would bring Morgan his first lucky break: the opportunity to make his work into one novel, and then another. Exit Through the Wound and its sequel would follow Maine Hudson and his son Parke, both beautiful men with an eye for satire and contempt for the world around them.

Into? exists apart from the storyline established in Morgan’s first two novels, but the style is a return to the form that brought him success. The book is a loose collection of episodic chapters that are authentic in their irregularity. Sometimes, there’s a series of events or a dramatic encounter; sometimes a day is summed up by one missed connection or small disappointment. Konrad Platt is a freshly-minted Angeleno, arriving in the States after the destruction of his relationship with now-ex-boyfriend Brett and navigating his way through the gay scene in LA. If the premise sounds similar, it should; while the individual decisions Konrad Platt makes may differ, the scenarios are often informed Morgan’s own experiences. This is also why, Morgan explains, his protagonists fit a particular mold.

“I can only write what I know,” he says. “It’s not my place to represent anyone else.” He says his process for writing starts at the end; the concept will exist, and the last sentence or paragraph will already be written. The rest of the text is designed to get to that final moment.

At the end of Into? Morgan offers neither resolution nor optimism. The novel finishes without the character having grown much as a person, and without the last-minute appearance of some grand romance or wonderful opportunity. It’s just a heartbreaking realization about his life, made weightier with the knowledge that the whole story was written around it.

Morgan doesn’t expect to get rich or famous from his writing. “I don’t think I’m ever going to make a living out of this,” he says, “and that’s fine, because the very large majority of writers don’t.” In some ways, he deliberately eschews the spotlight, uninterested in changing his art or losing control of it in favor of huge commercial success. He also goes through cycles when writing, oscillating between wanting to write a new book and — after the fact — vowing to never do it again.

“My relationship with writing is very complicated,” he admits. “It’s the thing that makes me happiest, and I feel most successful doing it, but it’s also the most taxing thing that I do.”

In spite of all this, he sees himself continuing to write as long as he can.

“Genuinely, it is the thing that makes me happiest in the world,” he says. “I don’t really get the same contentment from my day to day job.”

In front of the crowd at NYU, Morgan is gracious and personable, fielding questions and speaking about his journey as a writer and a gay man to the gathered crowd. While he’s candid and kind with his answers, there’s still some ambiguity to where North Morgan the person ends and the character begins.

At the end of the event, the organizer invited those in attendance to come up and have their books signed. Just inside the cover of my copy, scrawled in block letters, Morgan writes: “THINK OF ME WHEN YOU’RE LONELY“ and the line between author and character blurs even more.