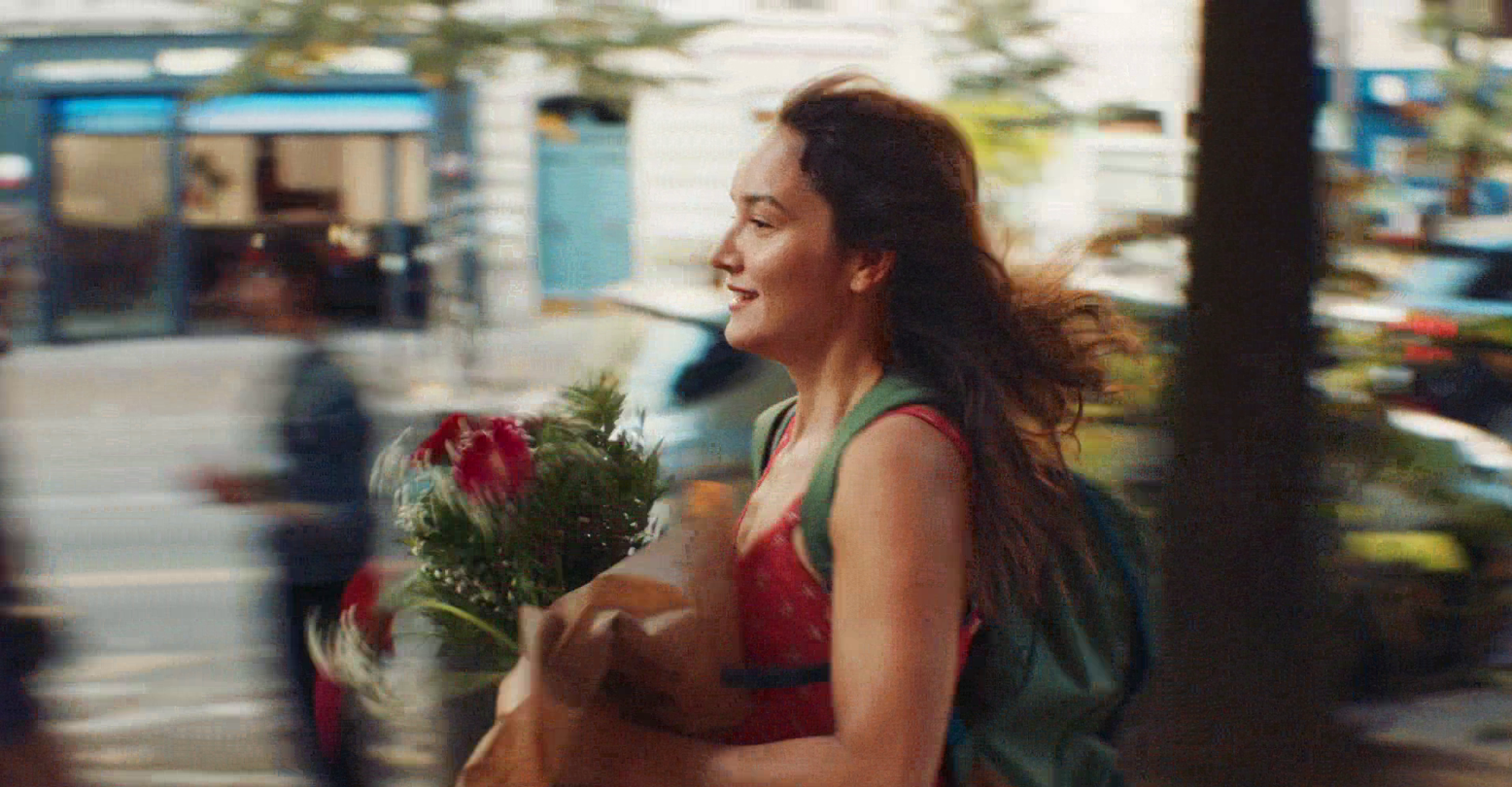 From the very moment that Charline Bourgeois-Tacquet’s debut feature Anaïs in Love begins, we are introduced to its core visual motif: a woman running. Whether it’s her legs, her lips, or her mind, Anaïs (Anaïs Demoustier), as we grow to know her, is a woman in constant motion. She sprints through the streets of France, talks like someone out of a screwball comedy, and barely seems able to finish a thought without jumping over to another.

She is what many would consider something of a manic pixie dream girl, or, at least, she comes across that way to the men who gaze upon her and find themselves infatuated—until they’re not. When her desire is focused on them, their dreams have been fulfilled. Take Daniel (Denis Podalydès), the married publisher that finds himself rapt enough by her that he seeks out her number from a friend and begins an affair with her. He’s “intimidated” by her, but drawn to her “naivete” and “free spirit”, emphasizing that he goes through women in “cycles” (twelve years for his first wife, and this affair begins after twelve years with his second.)

It isn’t until her interests move away from him that he becomes defensive and resentful, and the film is pleasantly always conscious and critical of him (in a way that many films that focus on men in mid-life crises are not.) This pattern follows that of her boyfriend at the top of the film. He accuses her cruelly of not knowing “what human interaction is,” and notes that she “advances like a bulldozer.” The latter is not at all an unfair statement, and she knows it, but she also challenges with: “You’re violent in your inertia.”

This exchange with her former lover is key to how we watch Anaïs and learn to understand her as a person. Yes, she’s “manic”. Yes, she’s something of a “pixie”. Yes, she’s often a “dream girl”. But she is, ultimately, just a restless woman running towards whatever her heart most desires. And the fact that Bourgeois-Tacquet knows that, exclusively focusing on that desire and what decisions it leads Anaïs to make, is precisely why the film is as captivating as it is. Much like those who have fallen for her, we, the audience, fall for her in the same way.

Just months ago, timed to the release of a number of films, the Guardian released a piece on why women were running on film (to which many folks casually joked “women be running”). Its examples, though all unique films worth visiting, felt lacking in actual motivation, however. Licorice Pizza, for instance, is not merely about a woman running, but about both a man and woman coming to terms with their lives and relationship while constantly trying to run away from each other (and inevitably running right back into each other time and time again.) Even The Worst Person in the World, which has its charms and premiered the same week as Anaïs in Love at Cannes, is passively mentioned in the piece, despite its use of running as a visual or narrative motif not really factoring into the film beyond one key scene (that is, admittedly, great to watch.)

Much like those who have fallen for her, we, the audience, fall for her in the same way.

Anaïs, by contrast, seems incredibly fascinated by the movement of its protagonist and how it mimics her desires. It’s even explicitly written into her character, as she is unable to withstand any enclosed spaces due to claustrophobia, enough so that she finds herself sprinting up five flights of stairs rather than taking an elevator. Practically any time she halts—be it because of the men in her life that try to hold her back or the usual frustrations of rent and work—she seems determined to push whatever obstacle lies in her path to continue running on ahead. Even when she’s floating in the ocean, trying to take a moment to breathe and reflect on her decisions and what life has thrown her way (and into the way of those she loves, like her mother whose cancer has returned) her body continues to float and move across the screen. All of the smallest arcs of the film seem designed to contextualize her inability to stop living life. Her mother’s cancer, as well as its remission and return, are a sign that death has existed so closely to her that she never wants to slow down in case it catches up.

Anaïs seems incredibly fascinated by the movement of its protagonist and how it mimics her desires.

It’s in everything she does. She smashes a fire alarm instead of finding out why it’s beeping. She tells men sleeping with them after sex stresses her out, a clear indication of how she knows having someone stay with her would only slow her down. It’s even in the way she reacts to a surprise pregnancy. The casualness with which the film approaches this last one is a special treasure and revolutionary in a simple way; Anaïs, uninterested in the decisions of anyone but herself, ignores her boyfriend’s desire to control her (and her body), and sprints straight into her abortion with complete determination. It’s never brought up again. There is no rest for the mind or body of an active woman, especially when she finds something she truly wants.

Anaïs, uninterested in the decisions of anyone but herself, ignores her boyfriend’s desire to control her, sprints straight into her abortion with complete determination. It’s never brought up again.

What Anaïs wants is not her boyfriend and not Daniel, but, in fact, the wife of the man she’s been having an affair with: Émilie (Valeria Bruni-Tedeschi). Her desire begins even before she meets her, looking through her bathroom and embracing her things; she plays with her make-up, her jewelry, and her clothing, in a way that exists somewhere between envy and lust (the score itself leans into something erotic but menacing, not so far removed from Vertigo). She watches a video of her with something like adoration. This woman is everything she’s drawn to. It’s a bit of that ever-existing challenge of queerness: does she want to be her or does she want her? That she says the line, “I don’t want to meet interesting people, I want to be interesting,” only punctuates this melding of identity. And the moment they meet isn’t an accident. It happened because, true to form, Anaïs runs toward her, the true object of her affection. 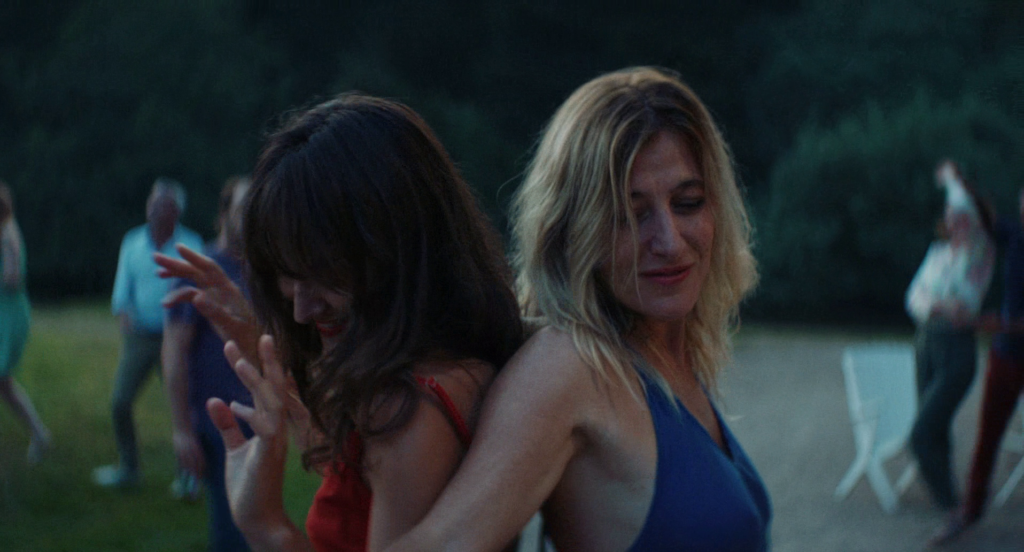 From then on, every single moment of their relationship is defined by movement. Anaïs doesn’t just follow Émilie to a symposium, but chases her down any chance she gets for further time to spend with her. Everything about the film feels more vibrant when they’re together, even the dull tones of her time with Daniel traded in for sunny colorful days with Émilie. What flaccidity there was in her boyfriend and Daniel is replaced with sensuality and movement, with the film’s centerpiece—a slyly erotic dance to Kim Carnes’ “Bette Davis Eyes” (which, lyrically, is so subtly queer)—being just plain riveting.

Rather than ruin the rest of the surprises the film has in store, I’ll note that Anaïs in Love continues with the conceit of Anaïs moving forward until its very last frame. Its ending, though concrete in some ways, is somewhat ambiguous. We will never truly know where Anaïs’ heart, body, and soul will take her beyond this very moment. But, for now, she’s in love, and what a pleasure it is to experience that.♦