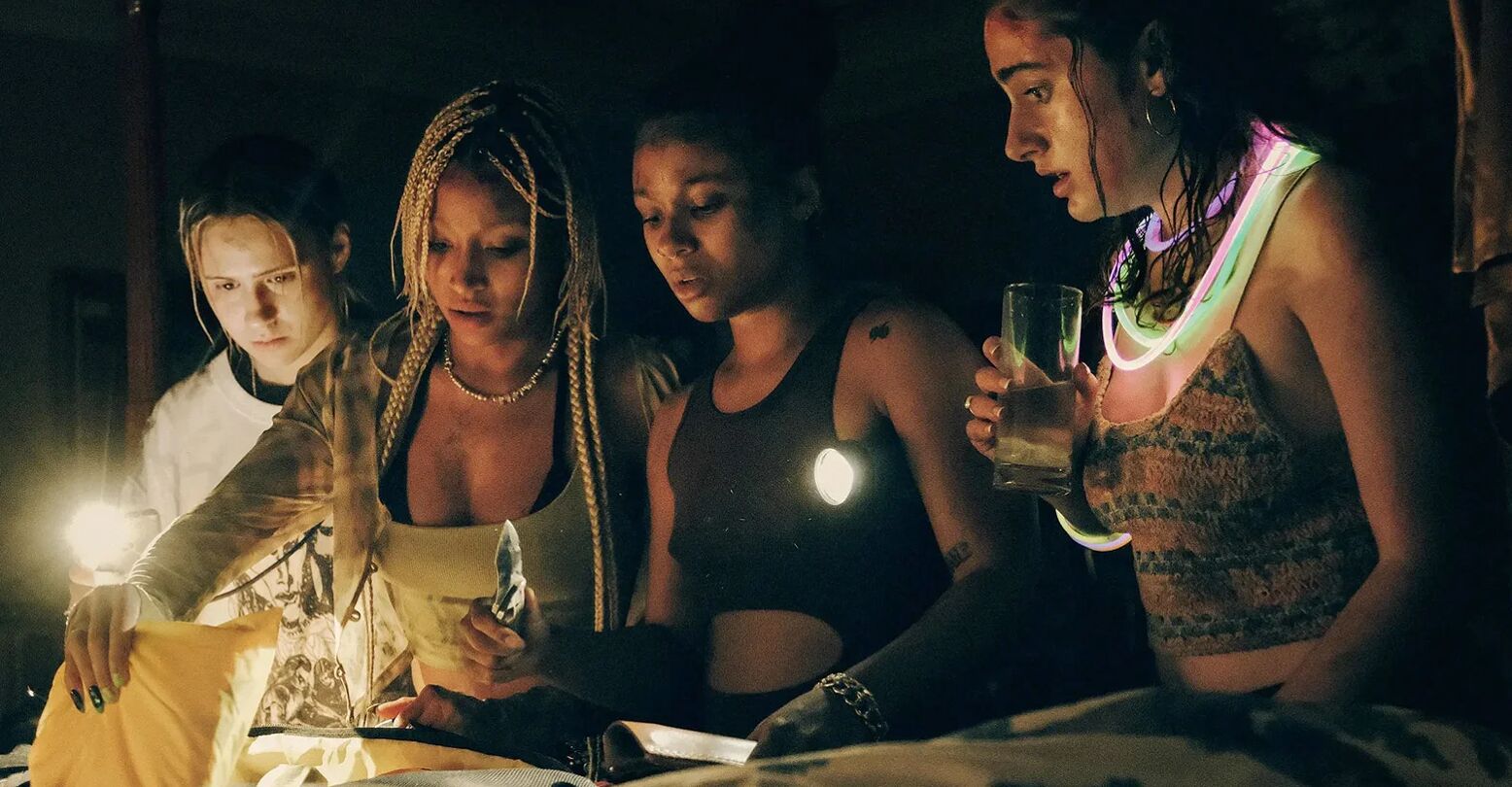 The more that the culture moves into an era of digital fame, the more artists believe that they have a grasp on how exactly to satirize that era. Influencers have been targeted by any number of recent feature films (with Ingrid Goes West being one of the few to actually get it right), while podcasters remain the butt of many a joke (remember that Halloween opening?) and even the premise for a whole series (the wonderful Only Murders in the Building), and folks of all ages (and especially women) are torn down regularly for doing anything from taking a selfie to sending a text.

Bodies Bodies Bodies enters the canon as another feature film about a young(er) generation that grew up on their phones and, thus, casually loathe each other. Like any semi-decent slasher, Halina Reijn’s latest film shoves all of its characters into one location and has them duke it out while overcome with paranoia. The setting here is a remote mansion where a group of fake friends have gathered to ride out a hurricane in relative luxury with a healthy supply of party supplies (including enough drugs, alcohol, and weapons to clearly cause a problem.)

The ensemble – Amandla Stenberg, Maria Bakalova, Rachel Sennott, Chase Sui Wonders, Myha’la Herrold, Lee Pace, and Pete Davidson – are mostly positioned as the kind of people who all (not-so) secretly hate each other, with a few outsiders (Bakalova and Pace) tossed in as red herrings. Stenberg, Sennott, Wonders, Herrold, and Davidson’s characters have all known each other for years but time, distance, hatred, and rehab have edged them further into the frenemies territory. When the group starts playing Bodies Bodies Bodies, your basic murder mystery party game with a Gen Z slant, feelings are quickly hurt and tensions rise. Things escalate further when the power goes out (as it often does during a hurricane) and an actual dead body turns up.

From there, Bodies Bodies Bodies attempts to amp up its murder-mystery vibes as accusations are lobbed all over the place and the body count slowly increases. Anyone who watches a slasher knows that this is where the good stuff is supposed to happen. You’re supposed to get increasingly delightful arguments and murders, an onslaught of scenes designed to keep the audience entertained as both character and viewer come closer to solving the mystery. The problem with Halina Reijn’s film, however, is that it has barely any entertainment value. It’s an out-of-touch piece of cinema by someone who clearly seeks to comment on the vapidity and violence (both verbal and physical) of a certain generation, but can’t find anything worth noting beyond the same lazy cattiness that has been depicted since the high school-based sitcoms of the twentieth century.

For all the hatred that a filmmaker like Sam Levinson gets online for focusing his mid-thirties gaze on the new generation of lost, hedonistic young adults, it’s a wonder why someone like Reijn (in her mid-forties) isn’t having the same accusations lobbied against her (and at least Levinson’s works of art have great soundtracks.) Every statement that Bodies Bodies Bodies seeks to make about our culture at large, particularly how easily swayed people can be when faced with false accusations, was already successfully made by Levinson’s unfairly maligned feature Assassination Nation—even down to the third act twist revealing that all the drama was started by someone doing it for shits and giggles.

Bodies Bodies Bodies is torn between earnestness and contempt for its characters and their behaviors, leaving it in something of a No Man’s Land where no scene leaves any particular impact.

Where a film like Nation managed to coat its social criticism in a narrative that emphasized the danger that lurked around every corner, creating terrifying situations that remained grounded in some level of reality in spite of moments of levity, Bodies Bodies Bodies never really feels as though it has any stakes as a horror movie. It is torn between earnestness and contempt for its characters and their behaviors, leaving it in something of a No Man’s Land where no scene leaves any particular impact.

Take the film’s extended opening shot of two women kissing each other in close-up. Is it meant to be provocative, a la Blue is the Warmest Color? Or is it meant to be an attempt at normalizing queerness on screen? Or is it an emphasis on the narcissism of a certain generation? The rest of the film should make some effort to justify either position, but it simply can’t. As a slasher featuring queer people, it’s about as subversive as They/Them, though blessedly less problematic by virtue of not having anything at all worth saying. But it doesn’t really work as a piece of satire either, with only two things making Bodies Bodies Bodies even remotely funny and watchable: Rachel Sennott and Lee Pace.

These actors are the outliers in a film that otherwise has no idea what tone it’s going for. They lean heavily into the same energy that Sennott had in this perfect video, embracing a self-awareness that the film sorely lacks. Though their characters and performances are arguably one-note, focusing exclusively on just how vapid and shallow these well-off clowns can be, their focus on getting laughs serves as a necessary contrast to lifeless plotting and characterization they’re surrounded by. It is, quite frankly, impressive how Reijn strips nearly her entire cast of any of their natural charisma, particularly that of Borat 2’s wonderful Maria Bakalova, trapped in a role that offers her nothing but whispers and wide-eyed stares.

It’s hard to think of Bodies Bodies Bodies as anything more than a forgettable failure. Without any reason for existing – neither updating the tropes it’s playing off of or even creating a moderately interesting version of the films it seeks to emulate – it simply ends up feeling as shallow, boring, and repetitive as the Charli XCX single that was released alongside it.♦