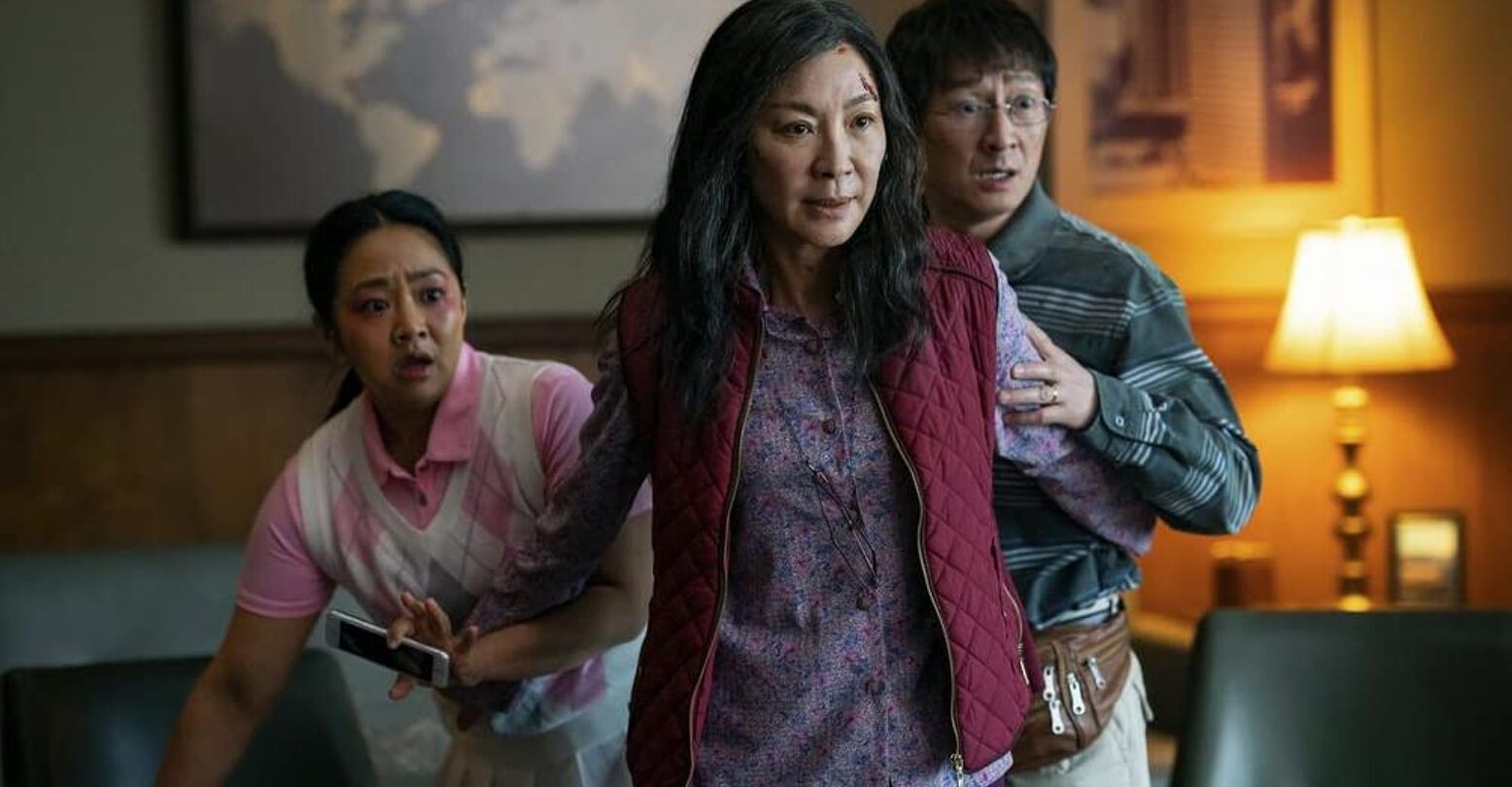 Spoilers ahead for EEAAO

To talk about Everything Everywhere All At Once succinctly is a special kind of trial, one that involves trying to remember as much of its bombastic imagery and elaborate storytelling as possible after just one viewing. That A24’s marketing and the many writers covering the film have been focusing on its multiverse angle isn’t surprising: it not only allows them to wax poetic about Michelle Yeoh’s ever-shifting performance in the film, but also plays into the cultural fixation on multiverses that reaches beyond the MCU (inspiring everyone to play with it, even Lincoln Center with their playful retrospective series, The Hong Sangsoo Multiverse).

But for all the spectacle that comes with the Daniels’ wonderful feature and discussing it, the filmmakers never allow its core to get lost amidst the myriad realities, inanities, and butt plugs. The very heart of Everything Everywhere All At Once is, in fact, a love story. Not the romantic kind–which exists within the text, though keeping it that limited would be counter to the film’s grand emotional reach–but that of mother and child; of two forces that are locked in constant conflict, in fear of not understanding anything about each other, only to realize they both want nothing more than to exist in the same moment as each other.

The very heart of Everything Everywhere All At Once is, in fact, a love story.

Let’s back up for a moment. Everything Everywhere is what one might expect Sliding Doors to look like if it was scripted and directed by the Wachowskis. It’s a film that places Evelyn Wang (Yeoh), an exhausted immigrant simply trying to manage her family and get her taxes done, in the role of unlikely heroine. She’s given a chance to experience what life would have been like had she made a different decision at any given moment. It’s a film with a ton of action, an abundance of self-aware humor, and enough heart to fill every inch of the multiverse. But, most importantly, it’s a film where the perceived villain isn’t really much of a villain after all.

Jobu Tupaki, the all-powerful force that has put quite literally everything on a bagel (resulting in a black hole of nothingness) isn’t just a monster. To limit the character as such, regardless of all the destruction they cause and the cult-like following they’ve built around their nihilistic worldview, would be a mistake, one that Evelyn herself makes. As soon as this being of evil is introduced, we are made aware that they are, in fact, an alternate version of Evelyn’s own daughter, Joy (Stephanie Hsu).

Though the bulk of the film is shown through Evelyn’s eyes, experiencing every hit—from her husband Waymond (Ke Huy Quan) handing her divorce papers to her tax auditor Deirdre (Jamie Lee Curtis) trying to kill her—via her perspective, it’s hard not to get swept up in the parallel narrative being explored with Joy and Jobu Tupaki. If Waymond is a force of unparalleled good, someone who is always solving things by simply having conversations, Joy and Evelyn are two of a kind; two people whose lives feel like they’ve hit a standstill, desperate to find some meaning within their misery.

The opening shot of the film, featuring a mirror reflection of the family singing together, is not quite shattered, but instantly subverted, taking the beauty of togetherness and emphasizing just how separate each of these characters has become from one another. Every shot of Joy that comes after this opening is one loaded with unspoken tension; her very introduction finds her staring blankly in the face of another tiresome experience with her family. It’s less every queer kid’s nightmare and more every queer kid’s reality: we are riddled with anxiety, depression, and frustration (among plenty of other loaded feelings) and our attempting to adhere to the status quo that our families desire only makes it worse.

That Stephanie Hsu can capture that sort of disaffected youth without overplaying it, not leaning into the misery of existence but rather giving an incredibly subtle and heart-wrenching performance of queer apathy, is key to this. It’s in every shot of Joy that is shared with Evelyn, down to the split second memory of the two of them sitting in a car together, her face clearly wrought with pain and resisting the urge to cry. It’s a moment that resonates with anyone who has ever had to have a hard conversation with their parent about their sexuality (or gender), an uncomfortable silence that doesn’t just weigh down one moment, but reverberates through an entire lifetime.

Joy and Evelyn are two of a kind; two people whose lives feel like they’ve hit a standstill, desperate to find some meaning within their misery.

“Every rejection, every disappointment, has led you here to this moment,” Alpha universe Waymond tells Evelyn, but that phrase doesn’t take into account just how differently each and every moment impacts those involved. However painful a conversation it might have been for both Evelyn and Joy, the weight that comes with coming out hits each one uniquely. For Evelyn, it is now a moment of acceptance despite the grief it once caused; her belief that she is of a different mindset simply because she eventually is “okay” with her daughter being queer is, in fact, a flawed perspective, or at the very least one that rewrites the past into something more comforting. For Joy, the moment is loaded with pain, no matter how much she tries to sideline that pain and move forward. Love exists between the two of them, but it is, to some extent, a fractured love.

Evelyn’s belief that she is of a different mindset simply because she eventually is “okay” with her daughter being queer is, in fact, a flawed perspective, or at the very least one that rewrites the past into something more comforting.

Jobu Tupaki, then, is something of a fascinating “villain” and extension of Joy’s persona. Where one is introverted, the other is extroverted; the quiet frustrations of Joy become the brash proclamations of Jobu. Jobu’s queerness, too, takes a unique form. Muted flannel is replaced by garish costumes. Everything becomes a heightened performance when she becomes all powerful, from transforming a cop into Carmen Miranda to whipping out dildo nunchucks to exploding people into confetti to…well, the list goes on and on. Jobu is less bouncing through identities and more changing costumes and embracing various facets of her complex personality, much like a drag performer without any one particular gimmick.

The level of camp and outward queerness that Jobu represents is inherently tied to evil (and it could be argued that some of the jokes, like the butt plug and hot dog hands, undercut the film’s sincerity and queerness), and in Evelyn’s eyes, this makes perfect sense. In spite of how much she presents herself as progressive simply for accepting her child’s sexuality, she instantly questions whether or not Jobu Tupaki is the reason Joy “thinks she is gay.” It’s a blunt moment that is instantly laughed at and challenged by Jobu (and, by extension, Joy), but one that rings true in a world where many parents of queer children attempt to rationalize the problems their children have. No matter their good intentions, many parents find themselves stepping onto a rake and hitting themselves in the face when it comes to navigating sensitive issues, especially when the cultures they were raised in have instilled certain beliefs that counter contemporary life.

Jobu is less bouncing through identities and more changing costumes and embracing various facets of her complex personality, much like a drag performer without any one particular gimmick.

Children of immigrants are often faced with this kind of situation; that of a parent who uses their heritage and those that came before them as an excuse for their own flaws and misperceptions. Evelyn’s rationalization of every single issue she has with Joy—which she often tries to pass blame for to others—is loaded with this, sometimes rather explicitly (and it even extends to her prejudices around others, like, say, Jenny Slate’s character “Big Nose.”) But mental illness and a lack of fulfillment in life isn’t exclusive to the queer child, and the Daniels do a lovely job at highlighting how much overlap there is between immigrants and their first-generation kids. We all find ourselves frustrated with how much or how little we know about life, or how unfairly we believe our hands have been dealt.

Children of immigrants are often faced with this kind of situation; in which a parent uses their heritage and those that came before them as an excuse for their own flaws and misperceptions.

When Joy/Jobu first says, “I was just looking for someone who could see what I see, feel what I feel,” she seeks validation for her frustration; an understanding that Evelyn herself could easily succumb to suicidal urges without feeling guilt. Instead, she finds something more realistic: our parents have had their own challenges, their own disappointments, and have overcome them in their own way. Whatever mistakes they make with us aren’t necessarily packed with bad intention, and likely a byproduct of the mistakes that were made with them. The film isn’t interested in defending bad parenting, but instead highlighting how nonsensical family bonds can be.

A mother can tell you you’re getting fat, hate your tattoos, and complain that you don’t call, but those things aren’t what defines your relationship. What defines the relationship between Joy and Evelyn (and many a queer parent-child combo) are the moments of beauty and understanding between the two. As corny as it sounds, it’s in the specs of time where all the disappointment gets set aside and a family embraces love. Life is less about acceptance—be it around one’s financial situation or sexuality—but about embracing the choices we’ve made and trying to build something hopeful upon the foundation we’ve laid, no matter if we’re movie stars, piñatas, or even rocks at the edge of a cliff. It isn’t hollow when Evelyn tells her daughter, “Of all the places I could be, I just want to be here with you.” It’s a simple, yet profound, declaration that, however much absurdity there is in any given universe, love can transcend all of time and space. ♦

Tags: A24, Everything Everywhere All At Once, Jamie Lee Curtis, Michelle Yeoh, Taxes, The Daniels