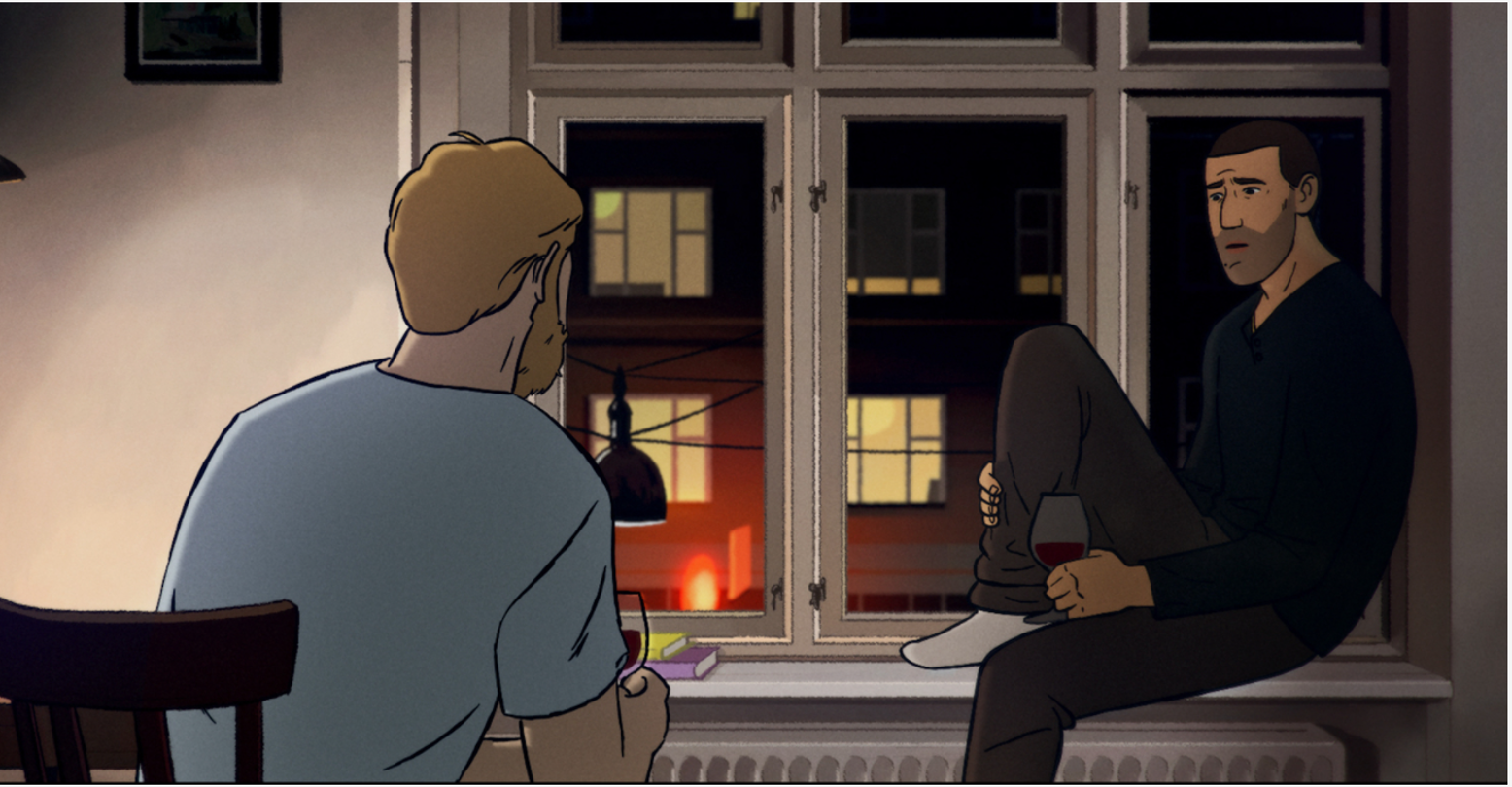 Flee, the new documentary out on limited release this week, is unusual in a couple of ways. First, it’s an animated documentary, recreating a true story through imagined drawings in a medium that’s about factual truth. Second, it offers a new perspective on the refugee story. While presenting a familiar enough story about an Afghani queer man who escaped to Denmark in the late 1980s, it stands out by showing the dichotomy between the story an asylum seeker must tell to combat a bureaucratic immigration system that criminalizes them and the real harrowing story of escape that they hold deep in their hearts. As a refugee myself, I have not seen that particular perspective presented before. There’s always a line refugees are afraid to cross. Questions they wrestle with. Will saying the absolute truth grant me the safety I need? Or will keeping a little something out of my story make the people holding my fate – those scary immigration officers at airports and border crossings – grant me that release with ease? Should the details of a story of escape from one’s homeland really matter that much? Sometimes they can be a choice between life and death. These are some of the questions that Flee presents.

Flee’s director Jonas Poher Rasmussen didn’t make this film to answer these questions. He just wanted to tell the story of his friend. He’s referred to in the film as just Amin, to keep his identity hidden. “I met Amin when I was 15 years old and I had always been curious about his story,” Rasmussen tells INTO over zoom. “He didn’t share his story for years. Both because he was traumatized, but also because he didn’t want to be victimized.” Animation offered the solution for telling the story honestly while keeping Amin’s identity a secret. After all these years he still carried with him the fear of being found out. “The fact that he could still keep control and not be public about it enabled him to start sharing.”

Should the details of a story of escape from one’s homeland really matter that much? Sometimes they can be a choice between life and death.

But animation was also a hurdle that needed to be overcome. “It takes a lot of time, and a lot of people,” says Rasmussen. However, for this particular story, it also felt more honest. “We could revitalize his past  in animation without reenactments with actors, or trying to recreate Afghanistan in the 1980s somewhere else.”

Important to Rasmussen was reminding people that “this is a real story. Amin is on this journey because of historical events that took place in the world we all live in.” To create that reality, he peppered the film with documentary footage. Sometimes it was precise. Amin and his family’s treacherous journey from Afghanistan to Scandinavia had many stops—Russia and Estonia among them— and many modes of travel, including planes, small boats and large shipping containers. “The archival footage from the refugee camp in Estonia was real. Amin told me that a Finnish TV crew came and filmed them there. It was quite easy to find at the Finnish film archive. Some of his family members were in the footage we found.”

To put the audience in a relatable place, Flee is peppered with recognizable cultural signposts. References to the films of Jean Claude Van Damme, 1980s and 1990s big pop hits like a-ha’s Take on Me and Roxette’s Joyride. “I asked Amin what kind of music he listened to,” Rasmussen told us, “and to my surprise, it was all these pop songs that I listened to myself in my childhood.” However, there’s just not enough cultural references from Afghanistan. As a teenager, in Sudan, I listened to Western pop music. But I also watched Egyptian soap operas and had an affinity for local artists. Perhaps if Rasmussen had included more references that were particular just to growing up in Kabul, the film would not have that immediate, recognizable jolt of nostalgia that puts the audience deep into Amin’s story.

For queer audiences, this film will have even more relevance. Because not only will they get that nostalgia jolt from pop songs, they will also get it from Amin’s coming-out story. Rasmussen thinks of Flee as “a double coming out story. Amin wasn’t able to be openly gay in Afghanistan. When he arrived in Denmark, he had to hide his past. He always had to hide parts of himself and not be totally honest to who he was.” We won’t spoil that special story here beyond saying that it ends well. Or, as Rasmussen puts it: “I wanted the audience to feel the relief he felt when he finally got it out there.” And we do.

Beyond all these elements that add relatability and put Amin’s story within a historical context, Flee is strongest at depicting Amin’s emotional journey. Rasmussen and his team invented “a surreal and graphical approach to the animation,” manifested onscreen with blurry, whited-out images that appear when Amin is describing a distressful part of his journey. Or even when he wasn’t present, such as when the story covers his sisters’ perilous crossing from Russia to Sweden in a container not fit for human travel. Guidance came from Amin’s voice. “You could tell in his voice that it was difficult for him to talk about some of these traumatic events,” says Rasmussen. “I thought, we need to see this in the visual style of the film, not just hear it in his voice. It’s not about showing what it looks like when a young Afghan is arrested by Estonian police. It’s about his emotions”.

Flee is currently playing in New York and Los Angeles and expands to more cities in January.♦