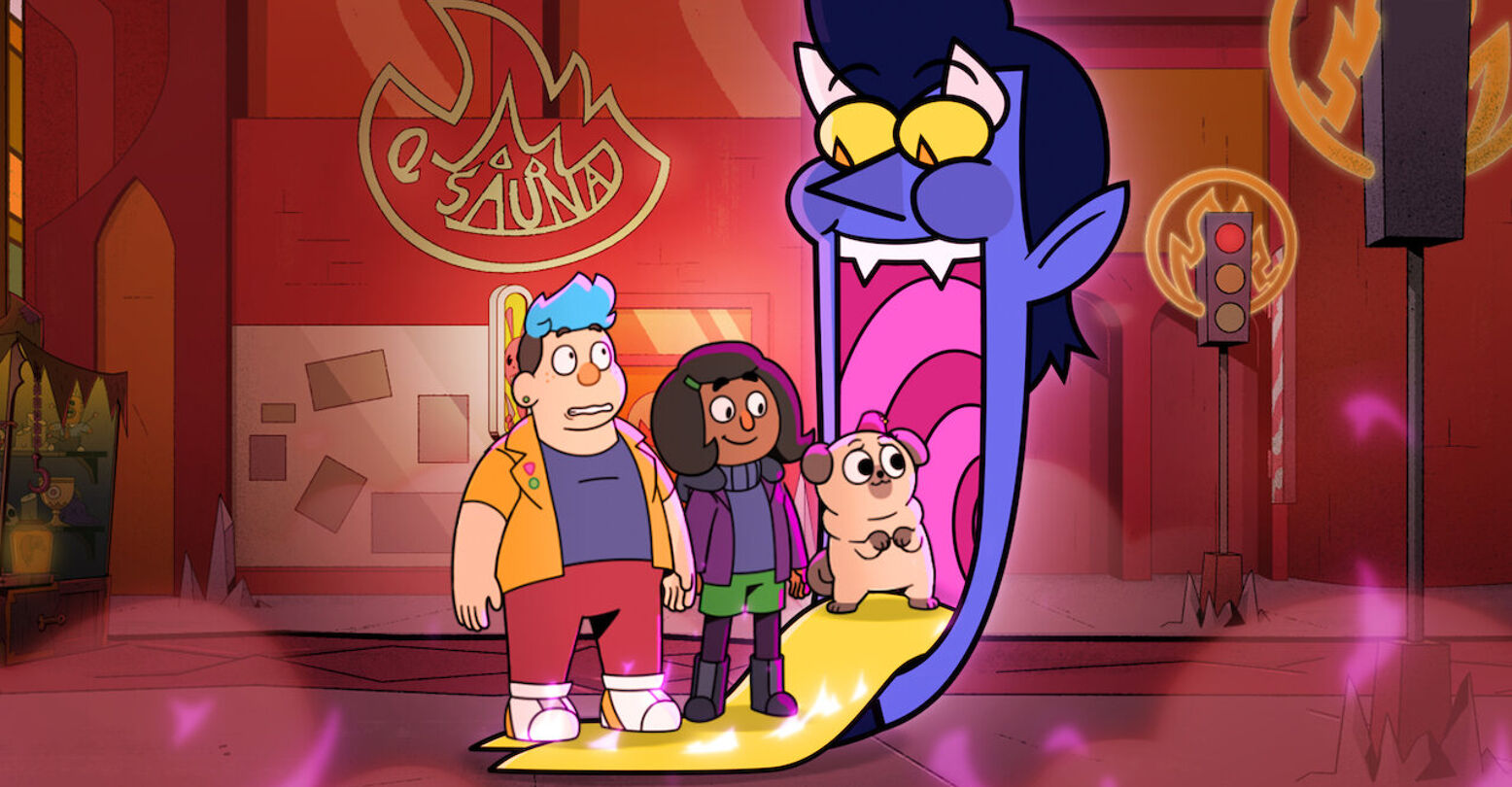 If you’re someone who’s always seen the inherent queerness—and creepiness—in the American theme park, Hamish Steele’s “Dead End: Paranormal Park” will hit the spot. Based on Steele’s graphic novel series of the same name, the Netflix animated series features the adventures of Barney (Zach Barack) and Norma (Kody Kavitha), two misfit teens who take a summer job at scream queen (and RuPaul stand-in) Pauline Phoenix’s extremely haunted amusement park. They befriend a demon named Courtney, have run-ins with the Pauline look-alikes that roam the park and often go mysteriously missing, enter the underworld for a tustle with a demon named Temeluchus, and even get a musical episode. The best part? The show is amazingly queer. Not only is Barney casually trans, but the show itself features a truly insider sensibility. So much Pride content panders to the cis and straight gaze: but according to “Dead End’s” creator, this series is “queer to its bones.” It’s the perfect spooky treat for gay goths and horror lovers who like a side of camp with their supernatural horror.

INTO: Zach, how and when did you learn you’d be playing Barney in “Dead End”?

Zach Barack:  I got the news a day before or after quarantine that I was going to do it. It was a much-needed shot in the arm. We did like a table read on Zoom, and it was right around the time folks were adjusting to the shutdown. I got really close with my onscreen best friend Kody Kavitha, who plays Norma Khan, and I am a huge fan of her. It was a real testament to the fact that we’re both similar to our characters, kind of like weirdos who really relished being able to meet online first.

The show is very relatable, not just in terms of how it shows transness. The difficulty of fitting into society in general becomes this like grand metaphor of the theme park, sort of being stuck in this weird liminal space.

Hamish Steele: I think one of the concepts of the show and something we kept talking about in the writers’ room, was that the battle between angels and demons and the supernatural is definitely the background. It’s the thing that’s always happening, and I think when you’re a teenager—especially if you’re a queer teenager, or neurodivergent—the battles you face every day are a lot scarier, I suppose, than the abstraction ofwhatever’s going on in the world. So yeah, even when we did the supernatural stuff, we definitely tried to work out what the kind of relatable teenage experience was first.

Barney’s family is in the middle of accepting him as trans, and not doing the best job of being allies. I’m wondering how that arc was planned out.

Hamish Steele: I love to hear Zach’s opinion on this, but I’ll say where the origin came from. I think the writers’ room was really interested in exploring that nuance in a family between “not accepting” and “fully supportive.” And I think putting what should be unconditional love to the test shows people that, “oh, maybe my love does have conditions or maybe I haven’t been as good as I should have been.” We talked in the writers’ room about like, which family member should be the least accepting of Barney’s transness. Part of it was that we wanted to keep actual depictions of bigotry off screen, but we wanted to still have the ripples of it. It comes down to the parents being able to say all the right things potentially, but you also see that they’re avoiding conflict and not standing up for Barney as they should.

I think there are so many different kinds of queer and trans storylines to tell. Sometimes, it’s tricky to know when you jump over from 101 explanation into the more nuanced stuff. But I guess we were writing this in 2019, and there was this idea that when the show eventually came out, maybe it would be at that stage where we could have these more nuanced plot lines. I’m really interested to see what people think of it.

Zach Barack: I’d read the comics before, so when you get the script, you’re like, “Oh, I know these characters.” One of the things that stood out to me pretty immediately was the transness: I scoured the web to find out if Hamish was trans because I was like, “this character is really nuanced and well written.” Barney feels really authentic to kind of the complexities of [being trans.] There are differences between the comics and the show, but when I got the scripts, I felt really relieved because it was really refreshing. And I gotta say, like, I’m a trans actor who’s gone out for a lot of team things, although I maybe flatter myself with that at this point, but it’s all like, vagrants, homeless teens. It’s never this. It’s never like a young person who struggles because that is the nature of being a marginalized person and it would be unrealistic to show someone who isn’t struggling. But also someone who has joy in their life: it’s just nice to see something that is balanced because it is rarely black and white. I will say it speaks really, truly to my experience as a young person and having some folks in my life who really got it, some who didn’t, but also like some who genuinely felt they got it but had absolutely no understanding of what it meant to practice that or demonstrate that outside of saying it.

“The first shot of the show is Barney dyeing his hair and listening to cavetown. If you know, you know.”

When I was reading it, it felt really brave. Not to like, jazz up the writers or anything, but to have a conversation that nuanced in public?  I feel like there’s this weird thing in queer and trans communities where we have inter-community conversations, but having it like, publicly is really nice to see. It gives your audience some credit. I mean, we’re not talking down to young people. We’re saying like, we can start talking about the fact that it is more complicated than that. And as much as we’d like to villainize every person who doesn’t perfectly support your transition well, that is just not an option for a lot of folks, especially young people who rely financially on their families. So I really enjoyed that.

INTO: I love that Barney’s transness is apparent, but it’s not explorative or catering to non-trans audiences.

Hamish Steele: I mean, I sometimes think the show is talking a little bit to the queer audience and the straight audience in slightly different ways. So like, in episode two, Barney says “I’m trans.” And for a lot of people, that’s when it gets confirmed. But the first shot of the show is him, like, dyeing his hair and listening to cavetown. And I think like, if you know, you know. One thing we also talked about is that we have these like, sub-textual queer stories. I think sometimes they can cut to a really interesting core of truth. Our idea was that we would do those stories and have overt representation at the same time. In Episode 2, subtextually it’s about the character Pugsley—the talking dog—going to his first Pride. It was about finding acceptance without going to a parade. And that’s the subtext, but it’s also the episode where Barney says, “I’m trans” and starts having a crush on the boy he likes.

I always think of it as like the X-Men thing where like, if you want to tell the story of the X-Men being this oppressed group, you also have to make it diverse. I think you can have your cake and eat it a little bit. There were a few weeks of working out how far we could go. And then we got the kind of go ahead of like, just go as far as you want. I didn’t want Barney’s transness to be a “twist,” which is why he does say it at the end of Episode 2 and maybe you consider it the twist, but like, all the information is there.

Zach Barack: And I will say my roommates and I are always talking about gay-baiting. We have a lot of conversations about it. And I think one of the things you lose with the “reveal” is that it implies that the interesting thing about them is that they’re queer. That’s the gag, you don’t get to do the slow burn. I agree with Hamish, and I just want to say that there are so many things that are offered by subtext and by having interesting conversations and allowing the characters to play these dynamics out. So many genre fiction stories are like, “are we doing something that’s metaphorical and symbolic, or are we going to include diverse characters?” And it’s like, you can do both.

Hamish Steele: I would just quickly say sometimes there’s this pressure when you know that you’re writing with representation in mind, that you’re you’re scared you can’t tell the full story you want to because you’re constantly working out how it’s going to be read by others and how high the stakes are. And I’ve always felt our goal with this show is that it has representation in it, but also is kind of queer in its bones and its storytelling sensibilities and the journey it goes on. So again, on a surface level, to an audience not looking for it, they’ll still see the representation. But those looking for like a theme will see how queer it really is.♦

“Dead End: Paranormal Park” is streaming on Netflix as part of their Pride collection.