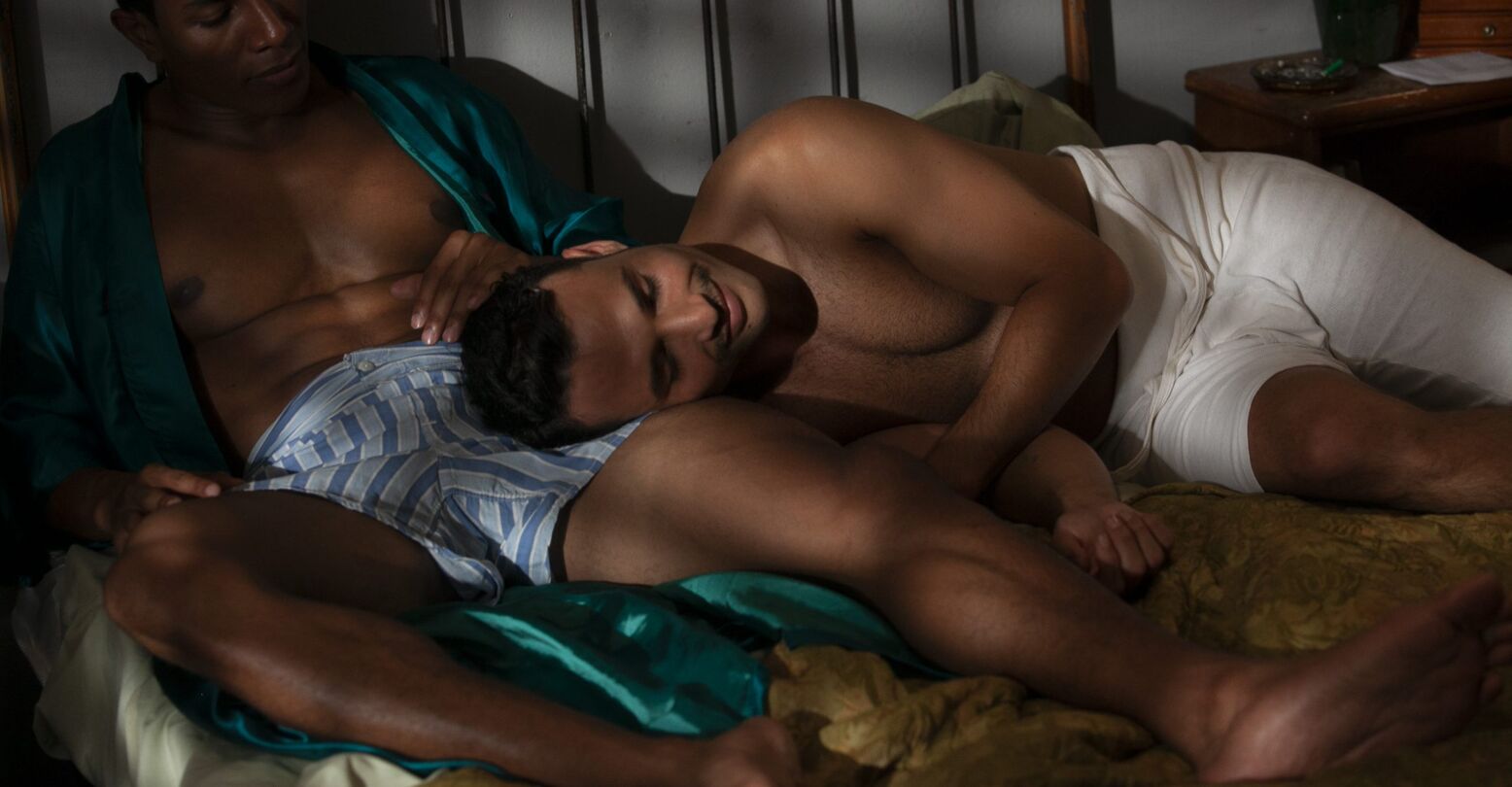 In 2007, queer representation was, in a word, lacking. What was available was decidedly whitewashed, offering glimpses of a simplified queer world only interested in telling the stories of binary-gendered white men of a very specific type. If you were looking for portrayals of Black queer life, you had only a few options: the groundbreaking Logo series “Noah’s Arc,” which followed the lives of four gay Black men living in Los Angeles. There was also “The DL Chronicles,” a sharp, intimate look at Black men dealing with the pain of having to explore their queer sexuality from inside the closet. The series, created by the now-married team of Deondray and Quincy Gossfield, made waves. Today, the Gossfields are taking another look at the hidden queerness left out of mainstream accounts of the Harlem Renaissance with a short film.

A lushly-filmed historical fantasy that could easily have been a true story, “Smoke, Lillies and Jade” is part of Lavender, a documentary featuring short films about the world of 1920s Harlem. The short film, featuring exquisite narration by the one and only Billy Porter, follows Alex, an artist looking to explore his queerness. When he meets a mysterious stranger referred to only as “Beauty,” he soon understands that he can’t suppress the queer part of him any longer. INTO spoke to the Gossfields about the impact of the Harlem renaissance on Black queer visibility.

INTO: How did “Smoke, Lillies and Jade” come about?

DEONDRAY GOSSFIELD: “Smoke, Jade and Lillies” is part of a bigger documentary that’s called Lavender. Robert Philipson came up with the idea to do this documentary and instead of doing that boring flashback thing, he decided, ‘let’s do these very highly produced narrative pieces that we’ll cut to while talking heads are telling the story of the queer presence in the Harlem Renaissance. Quincy and I came in and being the creators that we are we, expanded upon those small ideas to make the standalone short films.

QUINCY GOSSFIELD: Robert is a historian and one of his focuses is the Harlem Renaissance. Our first piece was Congo Cabaret, which was adapted from the Claude McKay novel Home to Harlem. And McKay made references to queer people in there. The queer presence in the Harlem Renaissance was so erased and kind of whitewashed, but the queer artists from that time left breadcrumbs throughout their work. For example, they would refer to a gay man as someone who “eats his own.” So the task at hand was to retell the story by finding those breadcrumbs in their poems, their novels, their short stories, and their artwork. Because they left those materials there for us. What Robert was able to do was to go through the source material, and to find those references and figure out how they spoke about being queer. We were able to expand upon that.

Robert is the scholar, we’re the filmmakers. We’re also lovers and descendants of the Harlem Renaissance. Deondre will tell you, it’s my love. I feel like if there was any other time I should have existed in this country, it would have been during the Harlem Renaissance. I love jazz, I love the art, I’m inspired by the poetry. Ever since I was a kid, I’ve been a Harlem-phile. And so when this project came to us, it was, it was kind of like perfect timing, because we were actually working on and developing a show that was loosely based around the period. It was about someone in my family who actually did live during the Renaissance. It was serendipitous.  Darryl Stevens, who starred in “Noah’s Arc,” is a friend of ours, and Robert told him he was looking for directors for these pieces for his documentary and he’s like, “Well, I’ve got the guys for you.”

DEONDRAY: The point is to bring these forgotten queer figures to life.

Trailer for “Smoke, Lilies and Jade” from Shoga Films on Vimeo.

Claude McKay isn’t talked about a lot, which is odd to me.

DEONDRAY: It’s so funny, because I keep talking about how LGBTQ+ figures of color, Black folks in particular, often get omitted. Like, being queer and out is not a new phenomenon for people of color. So it’s good to be able to tap into those roots and know where we’ve come from and the struggles that have happened to us, not just as Black people, but as Black queer people, and it validates you in so many ways and that’s why it’s so exciting to bring these stories and these people to light, because you get to know your lineage in a different way.

It feels sometimes like we’re making it up as we go along and setting the tone, but when you look at this history, you realize that you’re not alone at all. Yes, these people existed long before you, but if only I had known, as a, as a gay teen growing up, that this moment existed in time and that queer moments in time existed before, I probably would have been walked very differently. Like, if these people came before me, if they did it, surely I can do it.

And as much as Hollywood wants to tell these stories, it doesn’t necessarily mean the stories are being told right.

QUINCY: Yes, and in our community, there is still this stigma attached to being gay. Being queer in general is still viewed as something negative, right. And as open and liberal as things seem today, and as common as it is to see a gay, lesbian, transgender, or nonbinary person today on television and film, when we go to tell stories about these historic Black figures and explore the whole of who they are, suddenly, people get really worried. Like “oh, is this damaging their legacy?” And it’s like, why is being gay, lesbian, bisexual, or transgender a damage to their legacy? It’s because people still see it as wrong, in the back of their subconscious. Like with that Billie Holiday movie, they didn’t go all the way there. They were like “okay we’ll give you a little bit” but they didn’t want to give screentime to Holiday’s partner, Louise Crane. They did a little bit, but they didn’t go all the way. And instead of just telling the story as it is, they’re afraid that there’s going to be backlash from the public. Because these people are held in such high historical esteem. I remember one of the films about Martin Luther King, Jr., and how they were afraid to go into the details about his extramarital affair. It’s written about, and it’s known. The FBI was trying to use that information to damage him. It doesn’t take away from the amazing person that he was and the work that he did to change the world. But in the end, he was a whole person, a whole being. There was more to him than just the “I Have a Dream” speech, and there were some things that maybe some folks find difficult to accept. And the history books leave out Bayard Rustin all the time. There wouldn’t be a march on Washington if it hadn’t been for Bayard Rustin!

And yet if they made that movie, I’m sure it would be totally whitewashed and awful.

DEONDRAY: Yeah, the respectability politics thing even dates back to the Harlem Renaissance period. It was such a contradiction because, on the one hand, these people were sort of staking the claim to Black excellence in art and culture, and being, creating this beautiful expression of themselves and kind of being unapologetic unapologetically Black. But within that community, there was also this idea of respectability at play. That’s why these gay and lesbian characters who played this huge part in the movement couldn’t be celebrated openly because people were still trying to appeal to the status quo. It was sort of a tightrope act of trying to be unapologetically black but also kind of sweep the things that are not so cute under the carpet. So that’s why we are here, and just rediscovering these folks from this period because they were purposefully put aside because their queereness wasn’t seen as “helping the movement.” It’s like “We love you, but can you guys like not?”  That’s the duplicity of being, first of all, Black in America. And secondly being queer in America. We’re always wearing two different shoes that don’t necessarily fit. We’re trying to be able to show up as ourselves, and be loved and respected and treated equally and fairly without having to play by those “respectability politics” rules.

What’s coming up next for both of you?

DEONDRAY: We did a film called Flames with Lena Waithe’s company that’s also coming out soon. For Quincy and I, our work is really themed around this sort of coming to terms with your sexuality. And I know probably in today’s terms as something that seems so so done or past tense, but, or our community like I keep trying to impress upon people that we’re still in that phase. We’re not talking about closets as much as we used to, but we’re still there. We get these emails and correspondence with these young men across the nation and across the world that are of color, they are still struggling with closet issues, big time. And it’s sort of sad because when we were doing “The DL Chronicles” back in the day, it was basically all about that phenomenon of men living in the closet and dating under the radar. We thought that when we made that, we had ushered into a whole new existence for Black, gay people that could help folks be more comfortable being themselves, and now we’re finding that really not much has changed. The needle hasn’t moved all that much. So, Flames is one of those films that explores this topic in modern-day times. Two young boys go on a camping trip to the forest, and all of this old stuff comes out that kind of ends in this very unexpected way while exploring this idea that we are still, as Black gay men, not living our full truths in 2021. It’s just crazy to me.♦