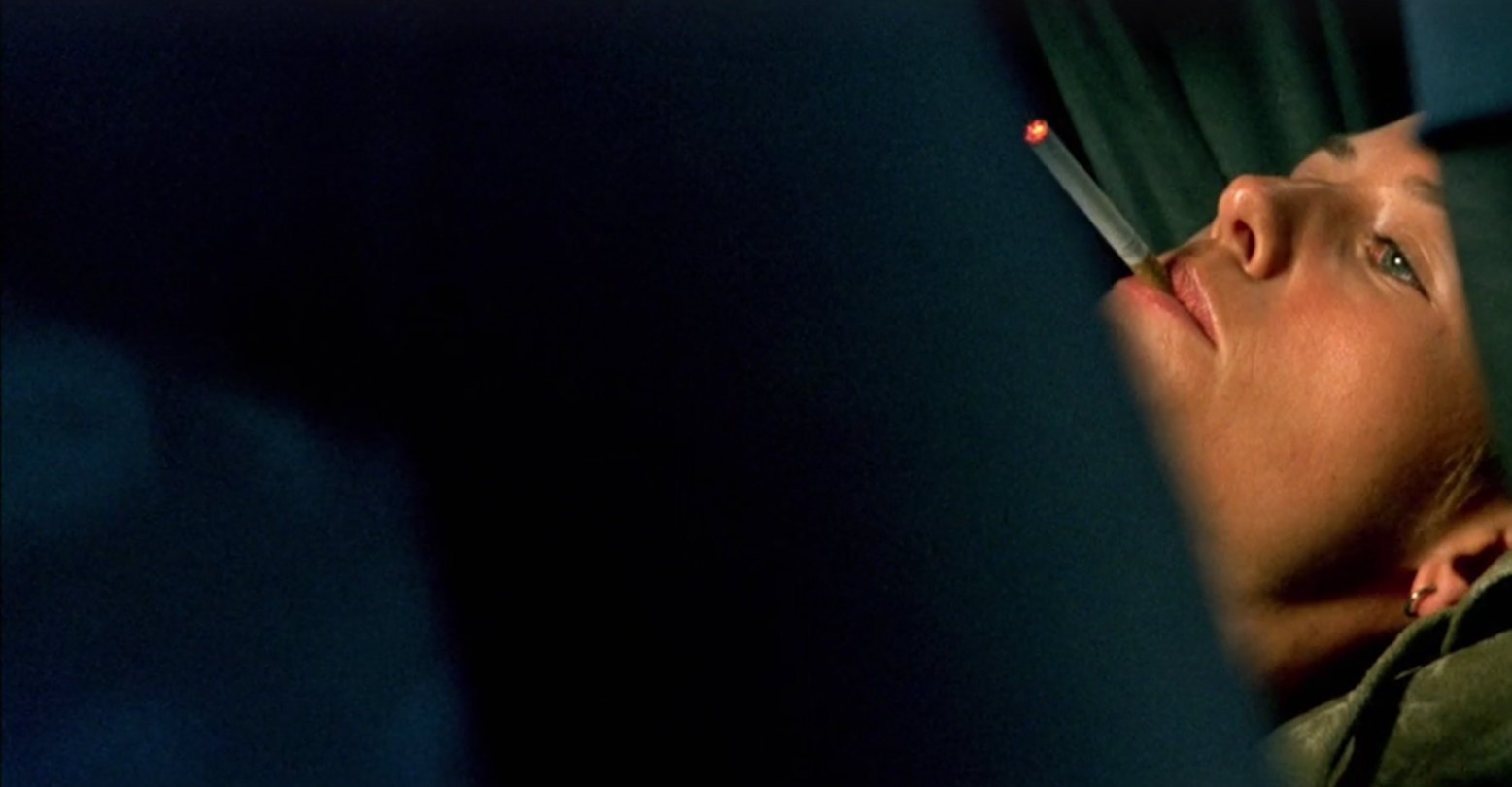 My friend Aimee told me about accidentally seeing High Tension on a date when it was first released in the states. She told me about the twist at the end and described it as “the most violent movie ever,” and that was enough for me.I knew I needed to see it.

But I wasn’t ready. Before I started to seriously get into slashers a few years ago, I was deathly afraid of them. As a kid, merely hearing the plot of a scary movie was enough to keep me up at night. I was scared of everything as a kid: Choking. Olde-timey cartoons of the devil. Campfire stories. People in general.

High Tension is the kind of movie you instantly understand if you understand horror. It’s pure 80s pastiche with a touch of Hitchcock appreciation, which makes it a de facto Brian DePalma film. But it’s a bit slower and subtler than that, even though it isn’t subtle at all.

We meet best friends Marie (a young Cecile de France) and Alex (Maïwenn) driving back from the airport. Marie is coming to meet her friend’s family for the first time, somewhere in Southern France. They look very happy together and very gay.

As they get deeper into the countryside, the mood changes. Alex’s family lives in a gigantic, rotting house smack in the middle of nowhere, surrounded by endless cornfields, so they’re basically asking to get murdered by a serial killer. Which is precisely what happens. Marie meets the family and settles in for a quick masturbation session in the guest room while everyone else goes to sleep. There’s a knock on the door, and the father answers it. It’s a random trucker, who stabs the father and then decapitates him. The entire family suffers the same fate, with the exception of Alex, who is taken hostage in the truck. And Marie, who has managed to escape the killer’s notice. She stows away in the truck, determined to free her friend.

She does, and she doesn’t. What happens—and yes, this is spoiler territory for those who care—is that Marie follows the killer unnoticed, until the two come to a bloody standoff in the woods. Marie finally manages to bash him in the head with a makeshift barbed-wire club and heads to free Alex. But Alex is horrified, even as Marie reassures her that “the man is dead.”

“What man?” Alex’s terrified eyes seem to say. She’s still terrified, because Marie is actually the killer. That middle-aged trucker? A projection, it would seem, of Marie’s disjointed, homosexual imagination.

This is a tricky twist for a few reasons. The first is that in terms of film, it’s a hard trick to pull off. Today, we’re kind of used to this trope: the killer has been you all along, or you’ve been dead all along, or some Sixth Sense bullshit like that. Here, it’s a little harder to do convincingly. We’re invited to figure this out when a homicide detective turns up at the gas station where the trucker—both girls in tow—stopped to get gas earlier. We saw the trucker kill the attendant brutally and then drive off as Marie hid in the men’s room. On the CCTV footage, we see how it really happened. It was Marie herself who killed him, looking straight into the camera as she did it, with a kind of lustful excitement.

Once we’re keyed into this information, the film invites us to marry the two characters as one, and it’s not an easy thing to do. In horror movies, the mysterious, middle-aged male serial killer comes with well-established semiotics. It’s easy to accept the premise that a man—especially a large, middle-aged, lonely one—would be a brutal killer of women. But a young woman is coded differently. In almost every single horror film ever made, young women are victims, and older men are violent psychopaths. There is a truth and a real-world logic to this. We know that men kill, and that women, statistically speaking, don’t do it on the same scale or for the same reasons. Sure, you can list off female serial killers from the Countess of Bathory to Aileen Wuornos, but even within those isolated instances you’ll find that the impetus for those crimes came out of something different. For some female killers, killing simply provided access to the male world of power. But very few women are specifically sexually motivated to kill other women. This is a Hollywood invention*.

Which makes it doubly weird when Marie—with the camera switching back and forth between visualizing the killer as herself and as this gigantic, bloody Frenchman—chases Alex with a chainsaw through the forest. “You could drive a woman crazy,” she tells her. But we see a man saying the words.

Which is why it’s a little weird, and kind of fucked-up, for the film to frame the story this way.

Fucked up, but not surprising. The early 2000s were a very weird time to grow up gay in. Sure, we had “Queer as Folk,” “The L Word,” and the gay cinema of the 90s. But that was about all we had. Primetime TV was still full of lazy, homophobic jokes and a complete lack of believable queer characters. If you were anything but 100% gay or lesbian, you were simply not part of the equation. And most movies and TV shows still couldn’t resist the urge to throw in a fun “man in a dress” joke or two. The world as I remember it from 2000 to 2010 was an extremely homophobic one, in the truest sense of the word. Phobia as in fear—deep and primal.

In America, we talk about homophobia now mostly in terms of intolerance. But in the years before Prop 8, when even the most mainstreamed white gays felt the need to fight for their rights, there was an atmosphere of actual fear concerning queer life. People were afraid of what would happen once gay people got rights. Remember those arguments about how gay marriage would usher in a new era of people marrying dogs and cars? Remember those anti-gay adoption ads that showed the burly silhouettes of two men grabbing a small child by the hand as if preparing to lead him into a sex dungeon? It was as if gayness itself was enough to make people completely lose sight of what they believed to be the moral edges of the universe. The fear of gay marriage seems absurd today, but I remember how scared of it people were then. They weren’t just scared of us changing certain institutions: they were scared of us. As people.

So they made us villains. Brian DePalma ushered in a new era of trans-sploitation with Raising Cain and Dressed to Kill. Paul Verhoeven gave us Basic Instinct, the classic tale of a murderous bisexual who supposedly keeps killing her male exes despite weight 90 pounds soaking wet, and using that most ridiculous of murder weapons, an icepick. These films were campy and silly, but they also carried a very clear message: “we’re scared of you. You’re unpredictable.” Gay people were, at that point, not yet neutered by capitalism. We didn’t have “Glee” or “Kinky Boots” on Broadway. Before gay people were packaged as safe, entertaining, and harmless, we kept straight America up at night. Because we scared them.

But is a movie like High Tension actually homophobic? That seems too simple a designation. You could look at the final twist at the end and read it as more transphobic than lesbophobic. But the fact that Marie justifies her murder spree by saying that she loves her friend and wants nothing to keep them apart points to a much more common narrative of the early aughts: Lesbians love too much. It makes them crazy, and then they kill people. Monster, the Aileen Wuornos biopic, came out the same year. So did Party Monster, which told the story of the queer “club kid killer” Michael Alig. A year later, the play “Doubt” opened off-Broadway, and “The History Boys” opened its West End run. Gay people were either killers, or pedophiles, or victims. All three? Maybe. But you couldn’t be anything else.

I was in high school and college during those years, and it was, for the most part, a relentlessly depressing decade. But more than anything, I was scared. I couldn’t stop thinking about all the ways there were to die. I felt like someone was always waiting behind some corner to kill me. When I would go home to visit my family, the quiet of the night would freak me out. My family would be talking and laughing at dinner, and I would feel a pricking at the back of my neck and turn around, expecting to see a cloaked figure armed with an AK-47 outside the window, ready to pick all of us off. I would sit in the corner of a room because that was the only place where I could see everything happening at once—and even then, I feared the wall behind me opening up to swallow me. Because nowhere was safe. And if I saw a movie that was even a little bit scary, it was enough to send me into a panic-induced fever for weeks at a time.

I spent years of my life just being scared, from morning until night.

It’s no coincidence, I don’t think, that after I came out as trans, I stopped being scared. I didn’t have those invasive, bloody thoughts anymore. I started to able to watch horror movies with some regularity: the more gruesome, the better. Because they’d lost their power, somehow. Suddenly every scary movie wasn’t a window into my future—it was just a movie. I’d never understood how people could say that before: “It’s just a movie.” And then, all of a sudden, I got it.

At some point, I’d stopped being scared of the eventuality of death, however gruesome, and started just being sad about it.

That’s the thing I feel the most now when I watch a horror movie. It’s not scary or gross or viscerally shocking, it’s just sad, because a lot of people die. When people die now, I get sad, not scared. Fear is just one way to think about death: sadness is another. And part of growing up into an adult means you stop being scared of the hypotheticals, like being killed by an ax murderer, and start fearing the things you know will come to pass. The deaths of your friends and family, and eventually, yourself.

But the thing I fear now, more than anything, is myself. I’m not scared of a psychopath breaking into my apartment at night. I’m scared of waking up someday and realizing that I’m a monster. Either because I haven’t stayed true to the things that are important, or because I didn’t do right by a friend, or because I let myself, in some way, be hypocritical. I’m scared of having whatever happens to people like Jeffrey Epstein and Scott Rudin happen to me. Because that’s the only response I can have. It’s the type of evil so baffling that the only response is: “given that kind of power, everyone probably has the potential to be evil. Including me.”

That’s the thing that gives a complex edge to this weird, lightly problematic movie. The idea that a woman would act like a predatory man in trying to secure the love she wants. The idea that a woman could be that violent and that bloody and that insane. It doesn’t make sense, but technically, it could. Anything could. And if you watch movies that paint you as a monster for long enough, chances are you’ll start believing it’s true.