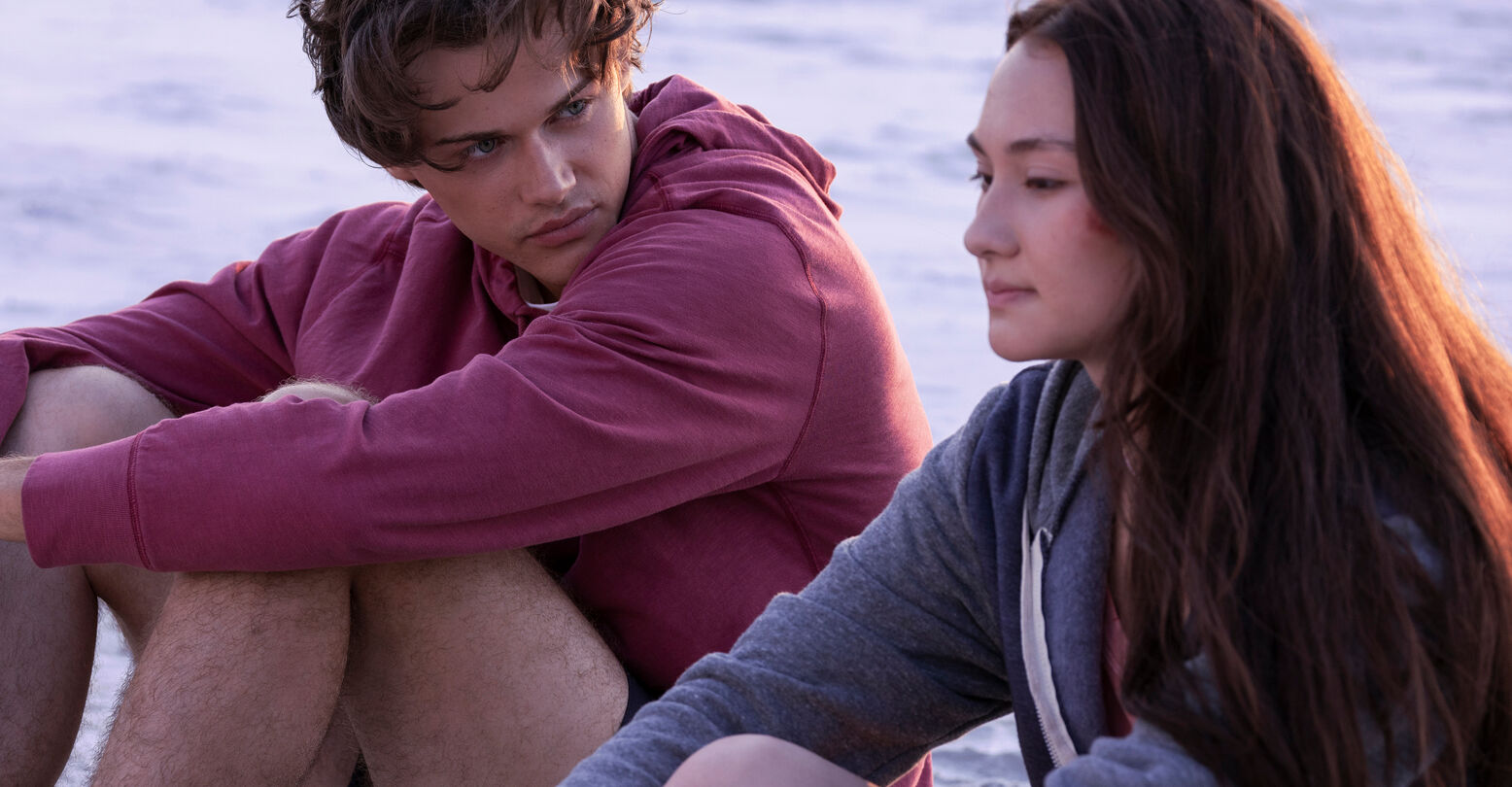 The premise of “The Summer I Turned Pretty”, based on the novels by Jenny Han (of “To All the Boys” fame) is basically: “Straight girl has a glow-up right before her annual summer vacation; Every year her family stays at a beach house with her mom’s best friend and her two sons; This year, both sons suddenly realize they have crushes on her while she meets a new guy at the beach. Which boy will she choose?”

But the beauty of the show —and the reason you’re reading about it here— is that everything about this straight love story is told with supremely gay energy.

More than anything else going on around the main character, Isabel “Belly” Conklin (Lola Tung), we are hit with the sense that the casting director found a group of people with too much chemistry. We immediately ship all the best friends, barely noticing their love interests. Everything from the soundtrack to the subtle glances between characters feels incredibly, inextricably gay.

taylor swift kim petras blackpink dua lipa phoebe bridgers all the tiktok songs like …. i know what you are

In the opening scene, Belly is packing for her summer vacation while her best friend, Taylor (Rain Spencer), lies on her bed. “Cruel Summer” —a song widely believed to be about the secret affair between Taylor Swift and Karlie Kloss— is playing in the background as Belly jumps on top of Taylor and they play-wrestle, giggling wildly. When Belly’s mom calls up that it’s nearly time to leave, Belly climbs off the bed, but Taylor pulls her back, gazing into Belly’s eyes, and boops her nose.

Everything from the soundtrack to the subtle glances between characters feels incredibly, inextricably gay.

The girls are talking about Belly’s long-term crush on Conrad, one of the brothers she spends every summer with, but there’s a potent sapphic energy in the room. When Taylor assures Belly that Conrad will notice her this year, it’s with an almost sour tone: “You look a lot different than last summer, Belly.” Later on, when Taylor visits during the summer, her fierce protectiveness of Belly and impulsive jealous behavior radiates the desperate, unhinged potential for an “I’m in love with my best friend, why can’t she see me that way!” arc. She has the deeply specific bossy energy of lesbian-coded high school mean girls in early 2000s films.

At the request of Susannah (Rachel Blanchard), her mom’s best friend / her second mom (more on that later), Belly joins the local country club’s debutante season. Susannah assures Belly that it’s more inclusive and progressive than she thinks: “It used to be about finding a husband, but now it’s about networking,” which is ironic because Belly’s entire goal and mindset for the summer is Boys. Subverting society’s expectations while desperately hoping for the attention that leaning into it provides? That’s being a teenager, but it’s also extremely queer.

There is some officially sanctioned queerness in the show: It’s briefly (forgettably) mentioned that the author who Belly’s mom is supposed to be falling for is bi, and there’s some conversation with a lesbian couple participating in the debutante events. “The Summer I Turned Pretty” does a good job of showing that queer people are casually accepted and thriving in its universe. One of Susannah’s sons, Jeremiah, (played with the boundless enthusiasm of a golden retriever by the striking Gavin Casalegno) is straight in the books, but gloriously flirtatious and openly queer in the show. Jeremiah says he’s “equal opportunity”, pointing out the girls and boys he’s been with, casually making out with a boy at a party the group attends together.

uuuuuuh im sorry???? that first scene with belly and her best friend at the beginning of the summer i turned pretty………………. gay………200%

On the first episode of The Summer I Turned Pretty and it all feels very gay. I’ll be genuinely surprised if any heterosexual couples come out of this. Cuz how???

…which brings us right back to the unofficial gay energy. From the moment they reunite in the first episode, Jeremiah and Steven (Belly’s brother, portrayed with a suave vulnerability by Sean Kaufman) connect with lingering touches, intimate looks, and bubbly laughter. The way they communicate through gentle touch and proximity is not something that could be brushed off as a typical “bromance” —it’s too tender. Steven and Jeremiah are endlessly playful together, but also seriously supportive of each other, without pretense or judgement. Steven is supposedly enamoured with an elegant, wealthy deb named Shayla, but everything about his courting her feels like he’s trying too hard to make an uncomfortable suit fit. In contrast, his easy comfort with Jeremiah speaks of many late nights whispering secrets to each other, and years of promises kept between them.

The camera’s focus on their adorable charm makes it easy to believe there’s a love story blooming, even if they don’t realize it yet.

The teenage boys’ endearing unselfconsciousness about their closeness speaks volumes, too. It doesn’t help that all their scenes are shot with the quiet intimacy of a candle-lit first date. The camera’s focus on their adorable charm makes it easy to believe there’s a love story blooming, even if they don’t realize it yet. I am heavily invested and hoping we get a glimpse of that in the already-renewed upcoming season two.

The teenagers are having a hot girl summer, but so are their moms. The MILF besties spend every episode giving “married lesbians raising kids together” vibes. The chemistry between Laurel (Jackie Chung) and Susannah is overwhelming; the sapphic vibes immaculate. So much that in the season finale, when Laurel tells her ex-husband that it’s not serious between herself and the bisexual author, there’s a knowing smile on his face when he says, “Of course it’s not.” Her ex explains that “Sometimes I think the only person you ever truly loved is Susannah.” He elaborates on this in no uncertain terms: “There were always three people in our marriage, Laurel.”

The women bring out a youthful silliness in each other while staying grounded in love for their kids. They get high off edibles together and raid the kitchen for snacks. They take on difficult conversations with each other’s children, hold hands while they watch the sunset, and confide in each other about tense relationships with their teenagers. They also keep a terminal illness secret from those same teenagers (really the only dark side of the show; It doesn’t get a huge amount of screen time until the end, but it’s worth giving you fair warning about.)

When Laurel and Susannah spend a drunken night at a bar dancing together to throwbacks like the Pussy Cat Dolls’ “Don’t Cha” to reel in guys who will pay for their drinks, it feels very much like a flashback to their flirty college past. The luminous scenes feature such effusive joy that you can almost believe that at another time they might have kissed and the camera just didn’t catch it.

Yes the soundtrack for The Summer I Turned Pretty slaps… BUT THE MOMS stole the show!!! Their chemistry was so strong I need them to end up together pic.twitter.com/3sqRHC7ZDK

The moms in the summer I turned pretty are so gay pic.twitter.com/Ku8ZbuWLB9

To be clear, these queer couples are not canon. You’re not gonna see Steven and Jeremiah kiss (yet —I remain hopeful that my season two dreams may come true!) But it also doesn’t feel like typical queer-baiting. The queerness shines so brightly that whichever boy Belly ends up dating (technically the whole point of the show) feels secondary to its overall queer energy. The way “The Summer I Turned Pretty” captures queer intimacy feels like the directors simply leaned into an abundance of genuine chemistry between the cast, and inadvertently built an entire alternate universe within their show: A universe where the gay just keeps bubbling up to the surface…

I binged The Summer I Turned Pretty today and my conclusions are that there were a lot of gay vibes and the soundtrack was impeccable. I will not be taking questions