“Last year was really exciting because it was the first time the event happened,” co-summit organizer (and founder of Out There Adventures) Elyse Rylander said, “but this year it looks much more like how I envisioned it would come together. It’s so exciting to see the growth and all these new connections forming. It’s clearly something folks have been wanting for a very long time.”

Alongside Rylander, the three-day Summit was co-organized by Hannah Malvin of Pride Outside. Their mission was to “come together with representatives of the outdoor industry, the conservation community, environmental education, and more to discuss the state of the LGBTQ community and the outdoors and look for opportunities to work together to support equity and social justice outside.”

Over 160 attendees from across the country made their way to the Summit. While a large majority identified as a part of the LGBTQ or queer community, a handful of allies also attended. Representatives from other diverse outdoor recreation groups like The Venture Out Project, Latino Outdoors, Outdoor Afro, Unlikely Hikers, and many others were also in attendance. 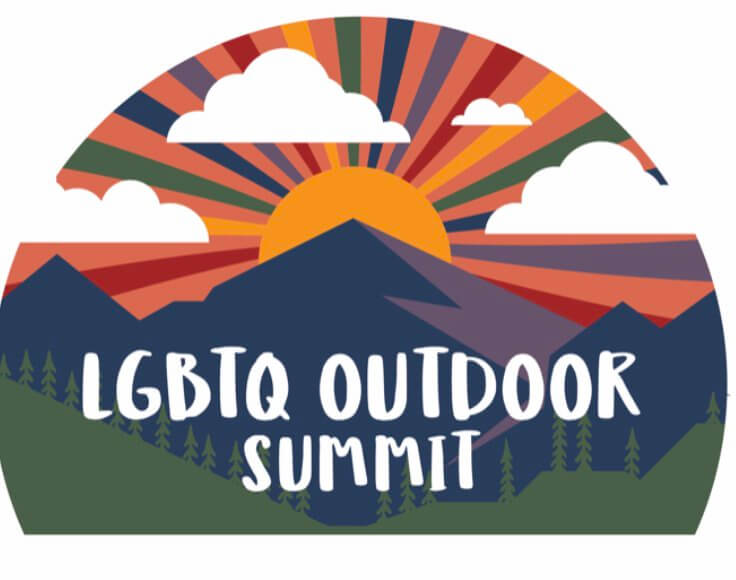 The Summit began with a land acknowledgment by Tongva-Ajachmen artist, tribal scholar, and indigenous language activist L. Frank and was followed by an opening by Miho Aida, an award-winning filmmaker and adventure athlete best known for her environmental media project “If She Can Do It, You Can Too: Empowering Women Through Outdoor Role Models.”

Aida’s opening speech pointed out that nature is one of the most queer-friendly places, noting that a variety of species (some 500 are documented) exhibit homosexual behaviors and that teaching these scientific observations to students is one way to bring up the topic of queerness as natural. She also joked of her rock climbing adventures that “nature doesn’t care who you are, the rocks don’t care who you make-out with on them.”

After an hour of structured networking, the Summit was split into caucuses of self-identified queer/ally and then again as POC/non-POC. The caucuses were said by the organizers to provide safe spaces for discussions pertinent to the specific demographic.

During the queer caucus, one self-identified queer woman voiced the concern of many of the discussions: “Nature is a place of healing and self-expression, though a homophobic/racist culture in the outdoor industry and within park service [creates] violent barriers to access outdoors.”

Another self-identified gay male speaker seconded the assertion, saying that he lives in a deep pocket of the conservative intermountain west, and often feels unsafe as he shares trails and campsites with many homophobic people. “Accessing the places in nature that heal me… that are an escape from a constricting society, where I feel most myself, can be difficult and stressful. I’m not scared of the bears or the weather, I’m scared of the people I might run into when I’m outdoors.” 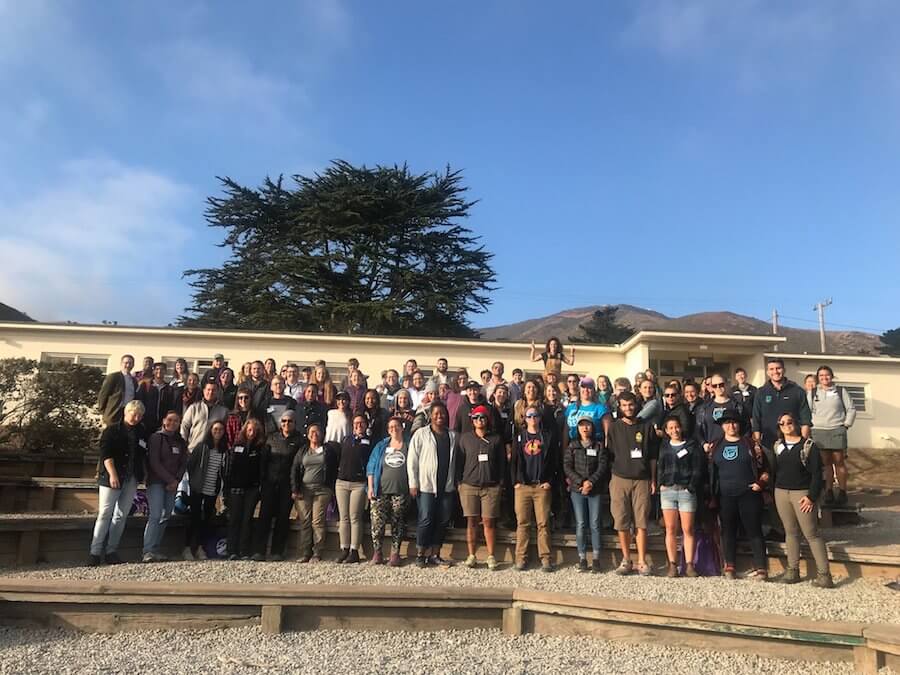 Afterward, a self-identified non-binary person who once led a trip with a group of other queer people, shared a story of having to deal with a group of “neo-nazis” camping near them. They described making decisions for the group’s well-being and staying up all night in order to ensure the group’s safety.

During the queer non-POC caucus that followed, i.e. the white caucus, the group wrestled with discussions of privilege: “How do we address our privilege as white people and help, without overstepping, in helping the outdoors be more inclusive?” as well as “Are we issuing our queerness as a shield to our whiteness?”

The summit, which was majority white, many times over the course of the weekend tackled conversations about the low representation of POC in the outdoors, citing a 2011 national park survey which found only 22% of U.S. national park visitors were a racial minority.

The first day concluded with a speech from keynote speaker Silvia Vasquez-Lavado, founder of the nonprofit Courageous Girls and the first openly gay woman to climb the seven summits (the tallest mountain on each continent). Vasquez-Lavado addressed the conference about the importance of adventure in healing and empowering victims of sexual violence.

Saturday morning consisted of workshops including LGBTQ Conservation Crews, Cultivating Gender Inclusion in the Outdoors, and Blue Discharges: How the US Army Accidentally Helped Create Queer Identity and Community in America.

The day continued with a panel discussion on Land Management Agencies, with representatives from the National Park Service, Forest Service, Bureau of Land Management, Fish and Wildlife, and National Oceanic and Atmospheric Administration.

Many representatives on the panel admitted not enough is being done to make public lands more inclusive for LGBTQ visitors. The audience asked questions about gender-neutral restrooms at visitor centers and trailheads, representation of queer people and POC in media and social media of the government agencies. Some representatives on the panels even voiced “frustrations with the current administration,” indirectly pointing to Trump and Secretary of the Interior Ryan Zinke.

Within the past two years, the current administration has shrunk national monuments and opened up wildlife refuges for resource extraction, discounted climate change, ignored native voices on their own land, and withdrew its sponsorship of the first permanent Pride Flag at Stonewall National Monument.

Panels continued into the afternoon and focused specifically on the outdoor industry, with representatives from large clothing and outdoor sports brands Patagonia, The North Face, REI, and Merrell, alongside the Airbnb of campsites, Hipcamp.

During a Q&A, many of the brands were critiqued and asked questions about gendering their clothing, with women’s styles always being more feminine and men’s more masculine. Negative experiences were also brought up by a self-identified non-binary person who shared “bad” and “weird” treatment from employees while they were shopping in the men’s and women’s sections of REI.

A self-identified transwoman also expressed frustration with Merrell for not making women’s shoes large enough to fit her after her transition. The representative replied that it was purely a business decision, that there wasn’t enough demand for it to make sense for the company. Another audience member addressed all of the representatives on the panel in saying that to her it sounded like, “(they) are choosing to not be inclusive of someone who wants a size 13 women’s shoe.” 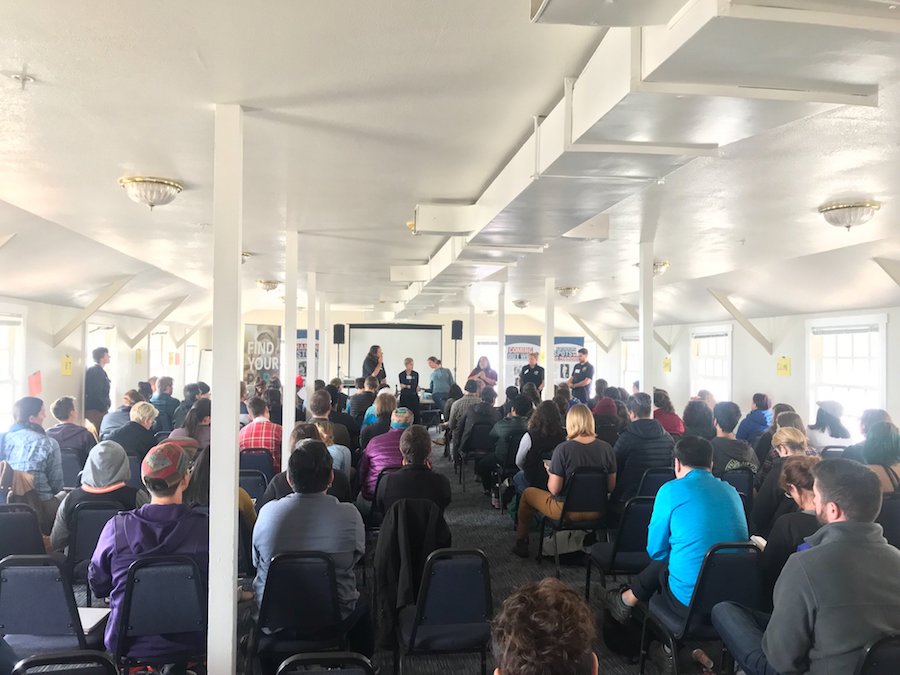 All of the brands, however, acknowledged that they were not doing enough to be more inclusive to LGBTQ and POC buyers, best said by the Patagonia representative: “Patagonia gets a big ‘L’ for loser in including diversity.” All representatives expressed that they were “willing to listen” and provided their emails to Summit attendees to reach out to them directly with ideas.

Besides queer, trans, and POC representation in the brands’ advertisements, the next big question came from an audience member who questioned the functionality of female outdoor clothing, saying that compared to men’s they were often shorter, pocketless, and less durable. She finished by saying, “We want to give young women the tools to get outside, otherwise, they aren’t going to like being there.”

Rylander said to INTO after the panel: “It’s been interesting watching the conversation with brands flow over the past few years. There were a lot of unanswered emails and a lot of proverbial doors being shut about five years ago, but now brands are coming to me and asking how they can be involved,” she said.

“I think that’s a great indication of where we are. But within that, with all partners and organizations and institutions that are started by non-queer folks and by non-marginalized identities, the level of authentic engagement can certainly vary.”

Followed by the panel was another series of afternoon workshops including Queering Survival Skills, Queer History of Land Champions, and Using Coalition Building to Promote Safe Spaces.

During Queering Survival skills, led by Queer Nature founders Pınar and So Sinopoulos-Lloyd broke down the stereotypes and myths of over the top Bear-Grylls-style survival skills into the small acts queer people do to survive. “It’s a survival skill to love oneself and affirm one’s own resilience in a dominant culture that sees you as less than. It is a survival skill to evade public bathrooms, or to choose to walk into one with your heart pounding.”

The workshop leaders also brought up the notion of “wilderness (being) deeply rooted in colonialism. The idea of wilderness perpetuates the mindset of white supremacy and colonialism and continues both regional and intergenerational trauma.”

This sentiment was echoed many times during the Summit; an audience member in the queer caucus on the first day said, “Let’s not forget all of our national parks and public lands were stolen from Native Americans through genocide and displacement and swindling long ago and acknowledge that the all of our recreations and ‘healing’ take place on these lands.”

While interacting with the audience, the leaders of Queer Nature asked for other survival tactics.  The group shared many of their own, from growing plants, cooking, crying, knitting, to carving wooden spoons. The workshop also put a high importance on paying attention to place and abiding by consent with our natural living surroundings for better mental health, for one’s own queer survival.

The Summit’s second day finished with outdoor adventures of hiking and geocaching led by different members of outdoor retailers as the sunset and the marine layer began to form.

Day 3 presented more workshops like LGBTQ Backcountry Medicine, Navigating Toxic Masculinity, How To Create a National Park, Outward Bound California First LGBTQ Wilderness to Urban Course. The workshops were followed by a final third panel: Youth and the Next Generation, before a final farewell closing by the organizers of the Summit.

“Nature itself is an inherently inclusive space,” Rylander said to INTO. “So when people (not in the LGBTQ community) question the need for queer outdoors groups, I think they are coming from a place of remarkable privilege— they are erasing the very real and very traumatic experiences that many people have because of the other people that are out there.”

She continued, “When I’m out there leading trips with the kiddos, I’m never worried about what mother nature is going to throw at us, because I know how to navigate those spaces. It’s the people element that makes the difference.”