To say that Chicago’s mayoral race has been unpredictable would be something of an understatement.

But the last time the mayoral race was this wide open, voters in Chicago made history by electing Harold Washington, its first (and only) black mayor.

A handful of candidates are hoping 2019 will also favor change at the top. An unprecedented number of women of color have thrown their hats in the ring — a list that includes Cook County Circuit Court Clerk Dorothy A. Brown, community organizer Amara Enyia, and Cook County Board of Commissioners President Toni Preckwinkle.

The best positioned of these candidates to capitalize on Emanuel’s unexpected exit from the race is Lori Lightfoot. The 56-year-old announced in May she would be stepping down as president of the Chicago Police Board to pursue public office.

In a kickoff ceremony where she was joined by wife Amy Eshleman and their 10-year-old daughter, Vivian, Lightfoot joked that she represents a “triple threat” in the race. In addition to being an African-American woman in one of the country’s most racially divided cities, she came out as a lesbian more than 30 years ago.

At the time, Lightfoot didn’t have role models to look up to. There were precious few examples of LGBTQ people living happy, healthy, and successful lives.

“I spent a lot of time agonizing over whether I was going to lose my family,” she told INTO in a wide-ranging phone conversation which lasted for nearly an hour. “It was really hard. I had to prepare myself for what I thought was a life of loss and, frankly, potential loneliness.” 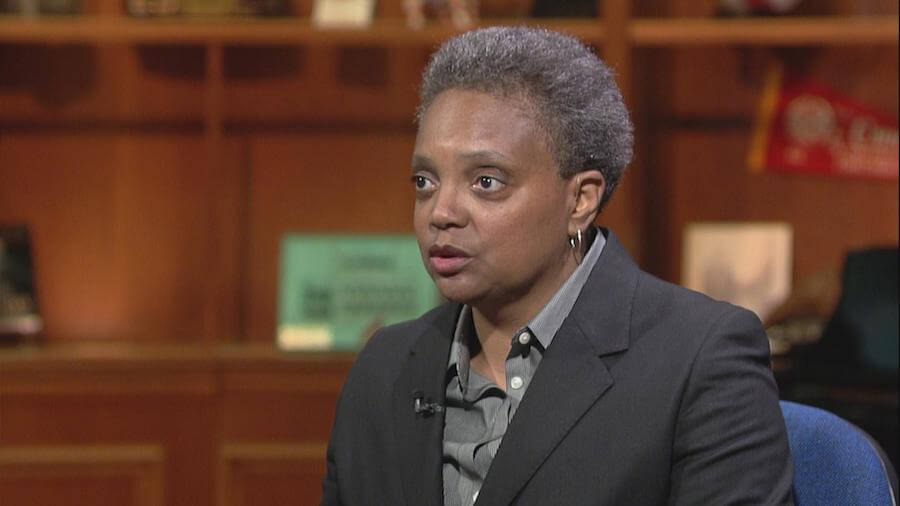 “When I was coming out, I didn’t envision the possibility I would be able to marry or be able to have a child,” she added. “That just was not in the realm of possibility for me.”

Although Lightfoot has spent the majority of her life in Chicago, she was raised in Massillon, a blue-collar town on the outskirts of Canton in northern Ohio. With a population of just over 30,000, Massillon is renowned as the birthplace of a surfeit of local sports heroes. Mike and Paul Brown, the father-and-son duo who have managed the Cincinnati Bengals for five decades, hail from the area.

Massillon’s other claim to fame, though, is its stark racial disparities. Despite being the 44th largest city in Ohio, it ranks just outside the top 100 of most-segregated cities in the United States. Gary, Ind., home to another famous family, topped the list.

When Lightfoot began elementary school in the 1960s, she was the sole black student. In a city that’s 90-percent white, the majority of her classmates didn’t have lives that looked like hers. Lightfoot’s mother worked a housekeeper. Her father, who was left partially deaf after a case of pneumonia put him in a yearlong coma, was forced to work two or three jobs just to make ends meet. 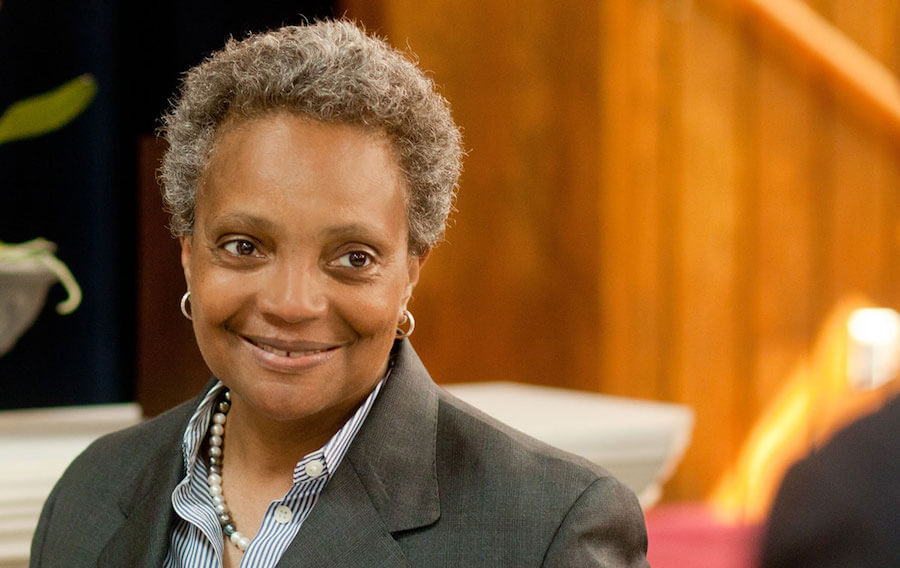 It’s a certain kind of kismet then that someone raised in the shadow of Brown v. Board of Education built her career in Chicago, where Lightfoot would become a federal prosecutor after graduating from the University of Chicago Law School.

According to the 2000 Census, the Windy City is America’s fifth-most segregated metropolitan area.

Lightfoot’s campaign has largely positioned her as a progressive antidote to the racial tensions that have long plagued Chicago. Yesterday the candidate unveiled a plan to tackle “gang violence” as a public health problem. The proposal includes revamping the database of known gang members and establishing a civilian public safety board which oversees the Chicago Police Department.

If there’s anyone with the mettle to overhaul the city’s troubled culture of law enforcement, Lightfoot believes its her. As head of the Police Accountability Task Force, the board released a searing 2016 report indicting the police’s disregard for “the sanctity of life when it comes to people of color.”

The task force cited CPD’s own internal data to make its case. Despite making up just 32.9 percent of Chicago’s population, nearly three out of four individuals (74 percent) beaten or killed by law enforcement officials between the years of 2008 and 2015 were black. This same demographic also accounted for 76 percent of suspects tasered by the police from 2012 to 2015.

When asked what she feels are her biggest accomplishments over the many years she has spent working for police reform, Lightfoot pointed to her record of getting results.

“While I was the president of the Chicago police team, we fired or gave lengthy suspension to over 90 percent of the officers who came in front of us,” she claimed. “I was determined to make sure that we set a very clear standard. […] I’m certainly not going to back away from that as mayor.”

Many officers resigned rather than face the Chicago Police Board, Lightfoot claimed.

The police issue is likely to decide the mayoral race following the October 2014 shooting of Laquan McDonald, which shined a national spotlight on racial injustice in Chicago. Garry McCarthy, who served as superintendent of the Chicago Police Department during the controversy, has frequently been positioned as Lightfoot’s biggest competition.

According to a recent survey of 1,128 voters, McCarthy leads all challengers with 16.8 percent of the vote. Lightfoot places in fourth with 9.6 percent. 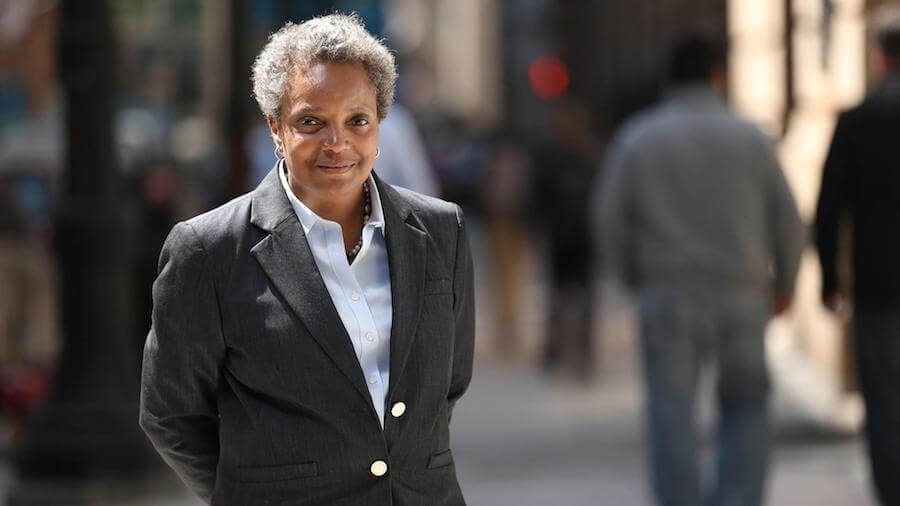 But as befitting a historically volatile election, early polling has been all over the place. A separate survey from Public Policy Polling showed Preckwinkle pulling in 25 percent of the vote shortly before she officially announced her candidacy in September. Yet another poll showed U.S. Rep. Luis Gutierrez, who represents Illinois’ 4th district, leading all challengers by three points.

The race is only going to get more chaotic as we approach November, when the filing deadline to declare a mayoral bid ends. Phil Kadner, a left-leaning columnist for the Chicago Sun-Times, claimed in an op-ed that 99 candidates may wind up competing against each other for the mayor’s office.

If Kadner’s estimate was intended as a joke, it’s not far from the reality. Nearly a dozen other potential aspirants have flirted with a 2019 mayoral run, according to the Sun-Times.

What will make her candidacy stand out in an extremely crowded field, Lightfoot said, is her years of committed advocacy for those living on the margins, as someone who came of age in similar circumstances. Whereas many mayoral candidates declared after Emanuel claimed he was hanging up his hat, she had already been in the race for months at the time of his announcement.

“There’s lots of folks who are circling around this race now, but I think it’s a fair question to ask them where they’ve been,” she claimed.

Getting an early start has given Lightfoot the opportunity to connect with voters in the Chicago area, particularly its sizable LGBTQ voting bloc. According to a March report from the Chicago Department of Public Health, 7.5 percent of adults in America’s third-largest city identify as queer or transgender. That’s 146,000 people.

Lightfoot’s campaign is counting on this powerful demographic to recognize the landmark significance of her run. If elected, she would be Chicago’s first black lesbian mayor, as well as just one of two in U.S. history. E. Denise Simmons first shattered the glass ceiling for queer women of color in 2008, when she was elected mayor of Cambridge, Mass.

No matter the result when votes are cast on February 26, Lightfoot has already claimed a piece of history. She is the first LGBTQ candidate to ever run for mayor of Chicago.

Early signs show Lightfoot’s message is resonating with Chicagoans, both those in and outside of the community. She claimed her campaign regularly gets photos of young boys and girls pictured with handwritten signs cheering her on. Almost 35 years after the total absence of possibility models made coming out a terrifying leap into the unknown, Lightfoot described the experience as “humbling.”

“I know there are going to be kids out there and people that I will never have the opportunity to meet in person for whom me being an out married lesbian will mean a lot to them,” she claimed. “It’s a measuring stick of the progress in my city.”

The prospect of having an out lesbian mayor in Chicago would have been “unthinkable until very recently,” Lightfoot added.

Lightfoot has gotten to see this progress up close. In August, she canvassed at Northalsted Market Days, an annual street festival held in Chicago’s Boystown gayborhood. While it allowed her the opportunity to shake hands with constituents, Lightfoot also met people who traveled from states like Texas and Oklahoma to have the chance to walk “hand-in-hand with [their] loved ones without fear.”

The candidate recognized her own story in their journeys. Enrolling at the University of Chicago three decades ago gave her the “strength and courage to continue on [her] path,” according to Lightfoot.

She hopes to give some of that back if elected mayor in four months’ time.

“Chicago has opened up the possibilities of a life for LGBTQ people that wouldn’t exist in places that they’re from,” she claimed. “I feel this tremendous opportunity to push the reality of our city as a place that is welcoming in a completely different and in a pretty bold new way.”