Last month Midwest FurFest attracted over 10,000 folks, in and out of fursuits, for one of the world’s largest furry conventions. They came for a mix of attractions both familiar (gaming sessions, writing workshops, dance parties) and surprising (appearances by Insane Clown Posse’s Violent J and his furry-famous daughter Ruby).

But one feature of the con drew some consternation: Chicago-based public health nonprofit Sinai Health offered free confidential HIV tests to all attendees. And while access to health care and related information is a definite asset to any gathering, the testing also drew a bit of a backlash, exposing widespread ignorance and stigma around HIV.

Responding to tweets from con organizers and attendees, various people claimed on Twitter that HIV tests are a sign of irresponsible behavior, that HIV testing is too depressing a topic for a con, and that people in other fandoms don’t need to know their status. One person claimed that HIV transmission was caused by dirty fursuits.

To their credit, health providers, con organizers, and attendees did their best to dispel the myths around HIV, turning the weekend into an impromptu — and clearly much-needed — lesson in safe sex for all.

With roots in mid-’90s sci-fi conventions, Midwest FurFest draws thousands to a convention center just outside Chicago each year. Charitable giving and community service have always been a component of the event, which raised $94,000 for a literacy program in 2018. And for the third year in a row, counselors and testers with Sinai Health were on hand for anyone interested in checking their HIV status. 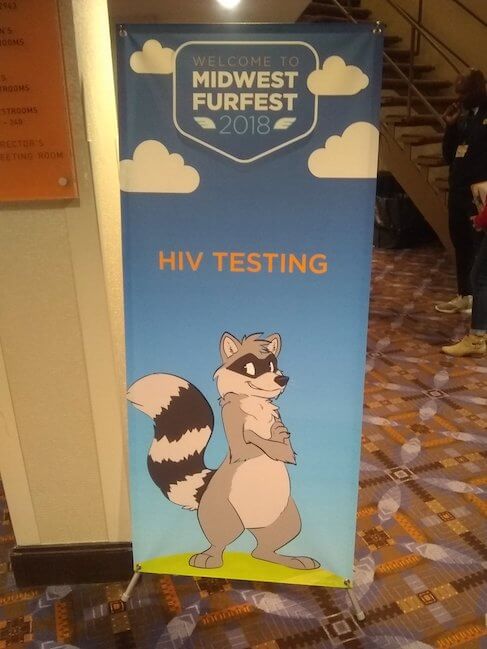 The timing was apt, coming just a few days after World AIDS Day and the release of a roadmap for ending the epidemic, signed by hundreds of HIV/AIDS organizations. Among the many recommendations in the roadmap was a call for all adults to be tested for HIV at least once in their lives.

But the frank, open discussion of sexual health troubled some observers on Twitter. “It’s supposed to be a fun weekend but HIV testing makes everything iffy,” wrote one person. “It’s just a little worrisome is all.”

“NEEDING it at a con is a sign that’s there’s way too much unprotected sex going on,” wrote another. “Most cons don’t need it.”

Many of the online responses were laden with undisguised homophobia and ignorance about what HIV is: “Your con is filled with sexual deviants who think it’s ok to spread diseases around like candy, some deadly like HIV;” “The spread of HIV is perpetuated by irresponsibility;” “People should get tested multiple times a year? What, so everyone’s a prostitute now?”

And then came the most forehead-slapping tweet of the con: “I just think that maybe if SOME furries WASHED their fursuits, the spread of HIV would be a little less severe.”

To be clear: HIV testing is a normal part of a healthy lifestyle and isn’t “worrisome,” any more than visiting a doctor for a cholesterol test or a flu shot. When treated, HIV isn’t by itself deadly, and as with diabetes or measles, treatment generally leads to a long healthy life. Even otherwise-responsible people can transmit HIV if they don’t know their status; and sex workers aren’t the only ones who should be aware of their status.

And in case it needs to be said, fursuits are an unlikely vector for transmission, since the virus can’t survive for long outside the body. (But it’s still good manners to wash your suit after yiffing.)

Tweets like these inadvertently illustrated the need for counseling and testing at fandom events — not just Midwest FurFest, but any gathering of people who might be ill-informed or carrying emotional hangups around sexual health that put them at risk. And having health care professionals on-hand is vastly preferable to previous solutions, such as the ‘90s-era handout “The Yiffy Guide to Safer Sex.”

“At the end of the day, anyone that’s engaging in unprotected sex should get tested,” said Kimberly Ramirez-Mercado, Program Manager with the Sinai Infectious Disease Center. She oversaw the testing at the con and noted that many of the people they saw had never had a rapid test before.

Now in its third year, the testing area at FurFest recently expanded to three rooms. Ramirez-Mercado estimates that they tested 225 people, and reached at least 600 with educational material. That’s up from 70 people tested in 2016, and 126 in 2017, according to FurFest. It’s been a helpful experience for both con attendees and health providers.

“This has really opened our eyes to engaging communities,” said Ramirez-Mercado. “We’ve had conversations with the lead organizer at FurFest about doing it at anime conventions. We do see that there’s a big LGBT population that goes to those conventions, but also people who aren’t being reached out to with information about HIV.”

That sentiment was echoed by FurFest’s board of directors. “This testing service was not intended as a statement, or out of any specific health concern,” wrote spokesperson Corey Strom, “but simply as a way to provide valuable information to those who may not otherwise have access to such services.”

Those services include testing, but also providing supplies like condom and lube, as well as information about preventative measures like PrEP. Expanding awareness and access to PrEP is seen as a key step in ending the epidemic.

“We want to give people the right information and possibly risk reduction suggestions so they can lower their risk for HIV,” said Ramirez-Mercado.

For all the fun, sharing of art, and sex that happens at a con, education remains a priority for organizers. “Since 2000, Midwest FurFest has existed primarily for the purpose of facilitating education in anthropomorphic literature and art,” Strom wrote.

Far from being “worrisome,” reaching out to convention-goers “empowers them to take control of their own health,” said Dan Regan, Director of Communications and Public Relations for Sinai Health.

And just to dispel one more myth, when asked if the furry fandom is at heightened risk of transmitting HIV, Ramirez-Mercado answered instantly and confidently, “Absolutely not.”

In other words, all people, no matter what community they’re a part of, should know their status and talk to a counselor about safe sex.

Furries who actually visited the testing area, rather than simply venting about it online, generally seemed appreciative.

“The experience was nice, quiet, confidential,” an attendee who goes by Ambient told INTO. “Would totally recommend it.”

She added, “Furry cons are pretty much the only place I go to where it’d even come up!”

Another onlooker offered sound advice about taking advantage of testing in any setting it’s offered: “Midwest FurFest is in the fucking US,” they wrote. “Take free health care WHENEVER IT’S AVAILABLE.”