A married lesbian became the first Democrat in her district voted into office in 21 years when she prevailed in last week’s Oklahoma special elections.

Allison Ikley-Freeman, a mental health counselor, won a hotly contested race to fill State Sen. Dan Newberry’s seat in the Oklahoma Legislature by an extremely tight margin. The 26-year-old bested her opponent, Brian O’Hara, by just 31 votes. That’s a little over half a percentage point. Ikley-Freeman’s victory represented the fourth seat flipped by Oklahoma Democrats in this November’s runoff elections.

The upset is undoubtedly impressive. Her West Tulsa district, which resides in one of the nation’s most reliably conservative states, favored Trump by a 40-point margin in the 2016 election. Local Democrats sank $200,000 into last year’s race just to be walloped by 15 percentage points.

Ikley-Freeman’s campaign spent exactly a tenth of that total. O’Hara, who ran on “protecting the Second Amendment” and “protecting the unborn,” also raised three times as much as she did in overall funding.

The State Senator-elect says she knew her chances were slim going into the race.

“I was not supposed to win,” she tells INTO in a phone interview. “We were really running for the sake of having Democrats get out and show voters that we were not going to not try just because it was a difficult fight. We should always be fighting for a better Oklahoma even if it’s hard.”

The Oklahoman was one of at least 37 LGBTQ candidates to win their races this year, a phenomenon that has been widely attributed to Donald Trump’s presidency. After beating her opponent by eight points, Virginia’s Danica Roem became the first openly transgender candidate elected to a state legislature in U.S. history. Seattle tapped its first lesbian mayor, while two trans people of color won spots on the Minneapolis City Council. 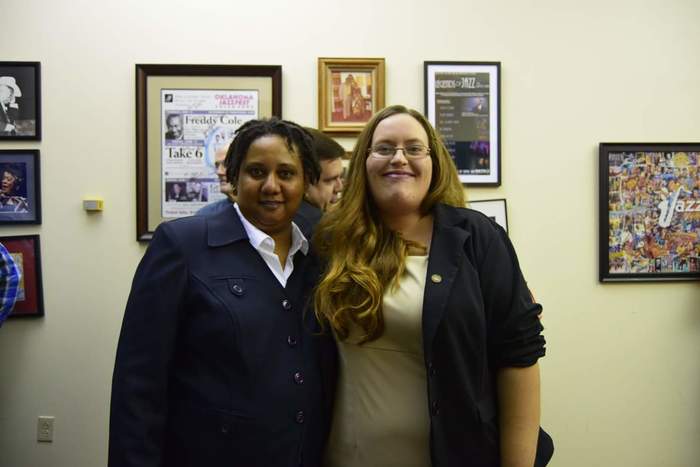 Ikley-Freeman, who has three children with her wife, says she was inspired to run for office when laws began being introduced “that were working against [her] family.”

A record number of anti-LGBTQ bills have been put forward in 2017. More than 200 pieces of legislation have been pushed at the state and national level, including several anti-trans bathroom bills modeled after North Carolina’s controversial House Bill 2. A Mississippi law allowing businesses and health providers to deny services to LGBTQ people went into effect in September, after a court injunction blocking the 2016 legislation was lifted.

Oklahoma flirted with the passage of Senate Bill 694, which would have eliminated all local nondiscrimination ordinances across the state. Had the law gone into effect on Nov. 1, any protections preventing discrimination against LGBTQ people would be null and void.

“I had this moment where I looked around and realized: These laws aren’t just bad for my family,” Ikley-Freeman says. “They aren’t working for any family I know.”

Although the current political climate inspired her to throw her hat in the ring, she claims Donald Trump wasn’t on a majority of the voters’ minds. Ikley-Freeman says that many of her constituents are just trying to make it through their day-to-day livesdealing with food insecurity, little access to healthcare, and diminished funding for public schools.

“There’s so many people in my district who are struggling with food and shelter that it doesn’t matter who’s in the Oval Office,” she claims. “They still can’t eat.”

Low-income residents in West Tulsa largely live in a food desert, Ikley-Freeman tells INTO. While blue-collar areas of her district are awash in strip-mall dollar stores, there are few supermarkets or grocery chains in close proximity, meaning that people are forced to survive on low-cost food of little nutritional value.

In addition, many public schools in the area have been forced to operate on four-day weeks due to budget woes.

The problem could soon get a lot worse. The Oklahoma legislature is currently poised for its second special session of the year after lawmakers couldn’t agree on a budget. The Oklahoma Department of Mental Health has announced it would stop paying for outpatient services, effective Dec. 1, if the legislators are unable to come to a compromise.

As a mental health professional, Ikley-Freeman knows that further gridlock will cost lives.

“I felt compelled to do something about itsomething more than sit behind a computer and complain on Facebook,” she says. “It’s been stressful and scary. There’s been a lot of tearful nights.”

Being an out lesbian running for office presents challenges in a state like Oklahoma, where only two LGBTQ people have sat in the legislature ever. When Ikley-Freeman first announced her candidacy, her campaign team explained that her “biggest weakness” would be her marriage: Her wife, Dawn, is black. The two were married in an intimate ceremony seven months ago, one that some family members chose not to attend.

A biracial same-sex family in the political limelight was almost certain to invite scrutiny in Red State America, especially given the spate of attacks against Oklahoma LGBTQ centers this year.

In March, an unidentified assailant fired several 13 grounds into the windows of Tulsa’s Oklahomans for Equality, which sits in the middle of town. A man came into the front lobby screaming at front desk attendants just hours after the vandalism was discovered. Just days before ballots were cast in the special election, vandals shattered five glass panels at Freedom Oklahoma, located in the state capitol.

“We knew that it was going to get brought up,” Ikley-Freeman says. “We were prepared for it.”

The local conservative newspaper ran two articles calling attention to her sexuality. The first was fairly innocuous. “Senate Candidate, a Democrat, Is Married to Another Woman,” read a headline published in the Tulsa Beacon on Oct. 12. A week later the paper openly endorsed O’Hara in an article referring to Ikley-Freeman as “his lesbian opponent” and “an advocate for homosexual marriage.”

“A tiny handful of judges may think that homosexual marriage is permissible and legal, but that doesn’t make it moral,” the Oct. 19 editorial reads.

Ikley-Freeman claims the attacks only made her work harder. When members of the campaign team would bring up the Beacon coverage, she would tell them that they needed to dedicate themselves to winning the election, not the opinions of conservative trolls.

“That’s why you’re the candidate I’m working for,” she claims volunteers responded.

Ikley-Freeman believes what she stood for mattered more than her sexual orientation. When she went door-to-door shaking hands and discussing voters’ concerns, many constituents didn’t know that there was a special election, she says. A lot of people were excited to feel like somebody was invested in their community and that someone cared enough to come knock on their door.

“Caring is literally my job,” the mental health advocate claims. “It has been for years.”

That message strongly resonated with voters: This was someone who understood what the community was going through and who was willing to listen, she says. 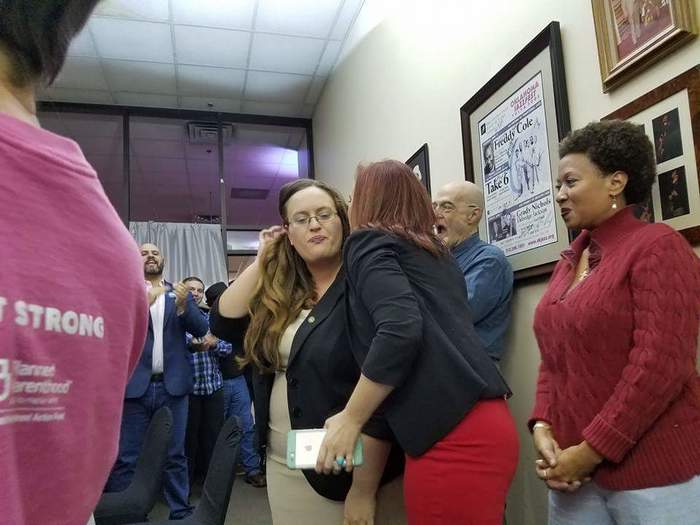 “That’s long been a big disconnect in this district,” Ikley-Freeman explains. “People who haven’t understood those struggles in a personal and intimate way attempt to represent those who are going through those struggles. I fit all the boxes on what they were looking for: someone who was willing to stand up and who had life experience having struggled.”

The State Senator-elect won’t take office until February, as Newberry’s resignation isn’t effective until Jan. 31. She will join Rep. Kay Floydwho was elected in 2012as the only two out lawmakers in the 159-seat Oklahoma Legislature.

Ikley-Freeman hopes her candidacy can be an inspiration not just to the LGBTQ community but to her own daughter.

When the Democrat found out that she won on Nov. 14, she claims that her six-year-oldthe couple’s youngestdidn’t know right away. The girl jumped into her mother’s arms when she finally told her the news. Ikley-Freeman claimed it was a “defining moment,” both in her daughter’s life and in her own political coming-of-age.

“It hit me just how much hope I can bring to the women and girls out there who dream of having their voices heard and doing something that makes a difference in this world,” she says. “There are no words to adequately describe that moment.”