Marquez became Montana’s first trans nominee for statewide office after winning the most votes of any candidate from either party in the June 5 primary races. After handily beating Democratic opponent Dusty Deering by a 65-to-35 margin, the 24-year-old candidate will face off against Republican Rodney Garcia in the November general election for Montana’s House 52.

In an interview with INTO, Marquez noted that she took a page out of Danica Roem’s playbook in Virginia. Roem, a former news reporter, became the first openly transgender person to ever be elected to a state legislature after defeating anti-LGBTQ conservative Bob Marshall by a nearly eight-point margin in the 2017 election. Despite the significance of her election, Roem’s campaign barely highlighted her trans identity. She focused on repairing Route 28, a congested highway in her district.

What Roem did, Marquez argued, was put the issues first.

“I admire the articles that have come out about her that say Danica Roem is actually the ‘boringest person alive,’” she said, referencing a New York Times op-ed. “You know, she put it so eloquently—we’re not going to focus on the fact that I’m trans, because guess what? I’m also a journalist. I’m so much more than just being transgender. I have a whole list of things that I am, and it just makes another part of me.”

“I think she kind of paved the way for a lot of trans individuals that want to run for office,” Marquez added. “She told us all that it is possible—as long as you are authentic and stay true to your message.” 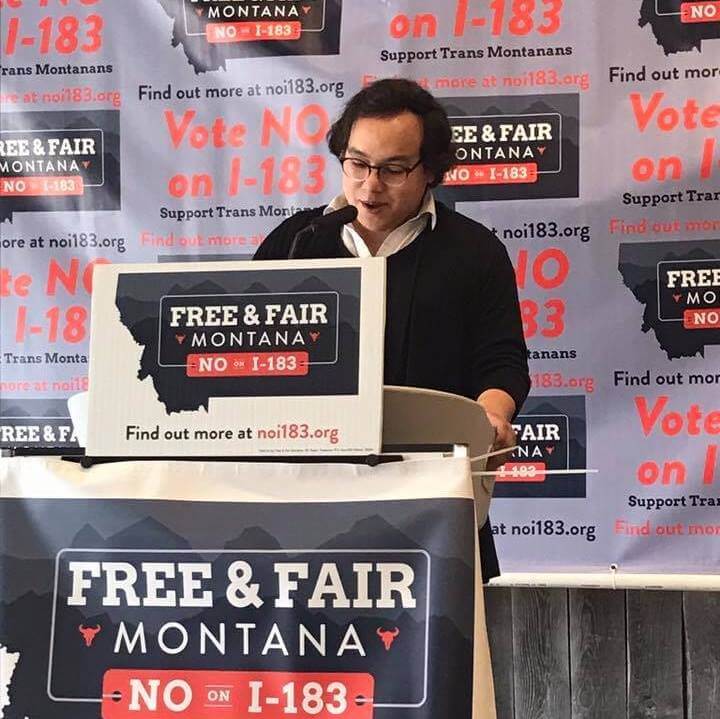 Marquez, however, is anything but mundane. Her working-class parents raised six children in a two-bedroom home. After her family had one of Montana’s largest-ever Habitat for Humanity homes built for them, they took in more than a hundred children through the foster care system. In total, Marquez claimed she has over 300 cousins scattered across the United States.

As a transgender Latina raised by Mexican immigrants, the Democratic candidate is running for office to see more people like her represented in the Montana Legislature. A supporter of Bernie Sanders during his 2016 presidential run, she recalled visiting her current state legislator last March as a student senator at Montana State University Billings. When Marquez asked him about his plan for higher education, he didn’t know what she meant. He asked if she was talking about “pre-K stuff,” before passing her question off to a colleague.

That’s when Marquez decided to run for office in 2018. She said a problem which plagues the U.S. political system is that elected officials don’t reflect the concerns of the largely blue-collar populations they represent.

Marquez discovered this first-hand while canvassing in this month’s Democratic primaries. She and a volunteer were going door-to-door knocking on houses in her district when they visited a trailer park she’s driven by many times. The porches were falling apart, and many would rock back and forth as Marquez stepped on them. Residents, not used to having politicians engage them, were often nervous about being approached, but when they did speak up, she got a better understanding of the everyday problems they face. Many were unable to afford health care or even running water.

“I’m not running as a trans candidate,” the political hopeful claimed. “I’m running as somebody that wants to speak for the people. I’ve said it from my very first day: This race isn’t about me. It’s about our community, and it’s about the working people of Billings, Montana.”

Marquez is running on a platform which recalls many of the hallmarks of Sanders’ presidential campaign—including $15 minimum wage, single-payer healthcare, and debt-free education. She believes voters are ready for her message. Although Montana is frequently lumped in with Trump country, she claimed it’s “really purple.” Its governor, Steve Bullock, is a Democrat, and she says there’s a hunger for grassroots progressivism in a state that Bernie won by more than seven points in the 2016 primaries.

While Marquez has been able to fly under the radar as a transgender woman, she says it’s her liberal politics which have earned her the most ire.

“They didn’t have a problem with me being trans,” she claimed. “Being up here in Montana, conservatives don’t know what to freak out about: I’m transgender, I’m a democratic socialist, and I’m also a person of color.”

But even despite the fact that her trans identity is far from a focal point of her campaign, her candidacy comes at an extremely critical time for Montana’s transgender community. After conservatives failed to pass an anti-trans bathroom bill in the state legislature, anti-LGBTQ forces are pushing an HB 2-like ballot initiative—known as I-183—which would force transgender people to use bathrooms that do not match their gender identity in government buildings and schools.

The Montana Family Foundation, which is spearheading the effort, has until June 22 to collect the 26,000 signatures necessary to get the proposal on the ballot in November. Should the group meet Friday’s deadline, local election boards have until July 20 to certify the results.

If passed, Marquez said I-183 would be “devastating” for her and for other transgender people in the state. The proposal would effectively force the trans community out of public life: When individuals can’t access a bathroom, it’s difficult to go to the movies, eat out at a restaurant, participate in class, or even hold down a job. While cisgender employees can simply go to the facilities down the hall, workplaces may not have accommodating facilities for trans staffers—meaning that transgender people are forced to leave the office every time they have to use the restroom.

This situation is not only stigmatizing for trans individuals who are outed every time they have to do their business. Marquez said the proposal is “just not possible to implement.” 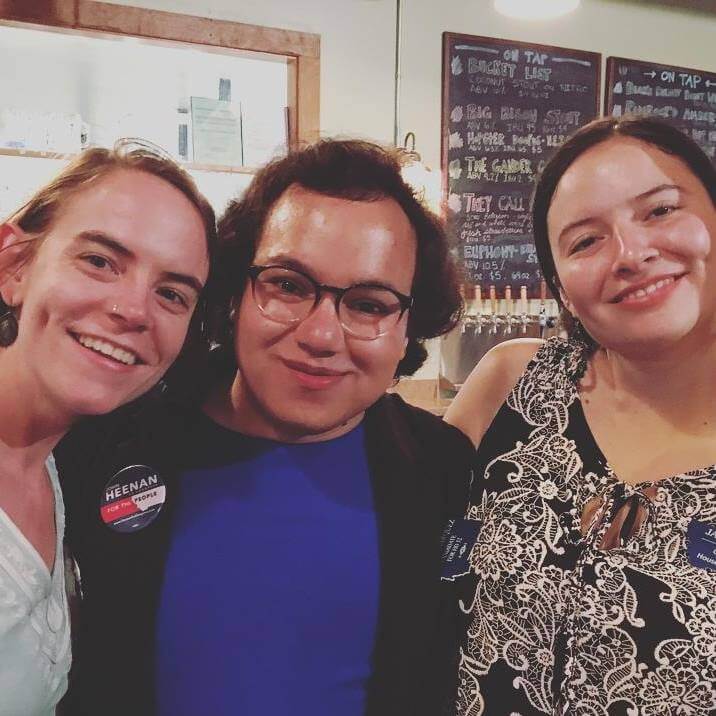 Marquez believes that having an openly transgender representative in the state legislature can dispel the irrational fears which fuel bills like HB 2—which are falsely predicated on widely circulated myths of “trans bathroom predators” who prey on women and children in public spaces. Since Roem took office in January, not a single anti-LGBTQ bill has made it out of committee in the Virginia General Assembly.

It comes down to a simple idea: When people get to know a transgender person, they’re less likely to support proposals which strip them of their basic civil rights.

“I hope that my district—just by knowing that I am here and I am not the only one, because we have many trans people here in Montana—they can put our lives first,” Marquez said. “They can say, ‘I know Amelia. She would never do anything to hurt me or one of my children.’”

The Democratic nominee knows that Montana residents have the power to overcome hate. Earlier this year, Grace Methodist Church, a queer-affirming church in Billings, was targeted in a wave of vandalism attacks. The congregation was painted with swastikas, along with a message reading “No Gays” over a signboard previously boasting a welcoming message to all members of the community: “Open Doors, Open Hearts.” The week before the church was desecrated with graffiti, someone dropped off a stack of anti-LGBTQ pamphlets.

After the attack, people from across the country wrote to express love and support, while locals scribbled positive messages on construction paper hearts posted on the walls of Grace Methodist. While a trans-inclusive nondiscrimination ordinance was voted down in 2014 by the Billings City Council in a painful 6-to-5 defeat, Mayor Bill Cole put out a statement condemning the vandalism—one which appeared to recognize the need for pro-LGBTQ protections for the first time.

“All citizens, regardless of race, religion, sex, gender identity or sexual preference deserve to feel safe and welcome in their hometown,” Cole said in February.

Marquez has witnessed this progress in her own life. She first came out to her family as gay when she was 14 and then transgender at 18, conversations she said were “difficult” in a traditional Catholic-Mexican family. Growing up with four brothers and one sister, her parents struggled to understand why she wasn’t outside playing football with the rest of her male siblings. In addition, having such a large foster family means there’s a wide variety of political opinions among her ever-expanding reservoir of siblings.

Although it has been a struggle for her family members to let go of outdated stereotypes about what defines men and women—which are complicated by the existence of trans and nonbinary people—they have witnessed how much happier she’s become since coming out six years ago. She’s no longer the person who struggled with crippling depression and anxiety under the weight of hiding her true self.

“At the end of the day, my family are very, very loving people,” she said. “They understand that everyone is different out there in the world and we just need to embrace those difference.”

Although her relatives were slow to get on board with her campaign because no one in her family has ever run for office, they gradually recognized the profound significance of Marquez’s win in the June primaries. While a record number of LGBTQ candidates announced their intention to run for office in the 2018 election, she is the only trans person—to date—who has won a competitive primary race for statewide office. Finnigan Jones, who is running for a seat in Texas House District 94, was unopposed in the March Democratic primaries.

Marquez stands a very strong chance of repeating victory in November. Garcia, her Republican opponent, admitted in an interview with the Billings Gazette that “years ago, he and his ex-wife had a domestic dispute in which he got arrested and was convicted.” Although the former member of the Montana House of Representatives declined to state the specifics of the alleged altercation, Garcia denied any wrongdoing.

The Democrat claimed Garcia’s election to the Montana House would be extremely bad optics for a state which has faced an epidemic of sex trafficking in recent years. The Billings-based advocacy group Tumbleweed announced last year it had identified 70 victims of sex trafficking over the prior 18 months.

These are the communities for which Marquez plans to advocate in office—those marginalized, oppressed, and silenced. On the evening of her primary election, her mother turned to Marquez and told her that Montana needs her.

“I think it really hit my parents at our election results watch party, when they were just like, ‘Oh my god, this is actually really important,’” Marquez said. “I went up on stage and my mom immediately just started crying. She said to me, ‘I raised you right for fighting for people. That’s all I ever wanted.’”