Somos Familia Valle‘s Valley Femmehood meets the last Thursday of every month at Pueblo y Salud‘s office in San Fernando, CA.  The community organization was created in 2014, led by local low-income first-generation college students who are LGBTQ+ people of color and immigrants. Valley Femmehood is just one of their regular initiatives, one that focuses on creating a safe space for intersectional feminists; “a support group dedicated to provide connectedness, empowerment, education, and fun” for “femmes and women of color within the LGBTQ+ and immigrant communities.”

June’s meeting is particularly important. It’s the tail-end of Pride month and this calls for special decorations; round tables with floral centerpieces, and petals scattered around the floor that lead a path toward a chair in the front of the room. The stage area, backed by soft lights, and pink and white drapery is where Gabe, the introductory performer will recite a poem, and after, where the evening’s keynote speaker will express her truth.

At 20 to 25 guests, they’re nearly at room capacity. There is a table full of food, made by mentor Ana, a testament to Somos Familia Valle’s roots and sense of community.

Introductions are made along with everyone’s preferred pronouns during a short period of icebreakers before the evening officially begins with a poem called “Big Black Bitxh.” The poet, Gabe, transforms from shy, and nervous, to a powerful and purposeful speaker the moment she begins to speak, setting the tone for the rest of the evening.

The evening’s keynote is “Not a Boy, Not a Woman,” and the speaker is Johanna Padilla. She is in a pink dress, pink shoes and she is bare-faced, a gesture of true vulnerability and openness. The ethereal aura she exudes is nurtured by the intimate setting and the open minds of the small audience listening attentively to Johanna’s narrative. Hers is a story not unlike that of many trans women of color; unfortunately not devoid of the recurring theme of violence, sexual assault, and rejection, which can be a damaging blow to one’s self-perception and self-value. It’s not pretty, and it isn’t sugar coated, but at the end of a string of battles no person should fight before the age of 27, is the strong woman sitting before us now.

People like Johanna, who felt a moment of empowerment in her teens despite the threats against her life and who decided to live authentically despite those dangers, deserve to be heard. “If I’m going to die at age 18, then at least I’m going to be happy,” she says of the day she decided she would wear a dress in public.

She is hopeful and resilient, and her energy reverberates all around the room in a way that tells you this is exactly what is supposed to happen, that this is changing perspectives. And that is the beautiful thing about the Valley Femmehood program. It introduces the Latinx community to trans lives beyond the judgmental scope we are raised to view them through.

Somos Familia Valle was founded in 2014 by LGBTQ+ college students of color for the purpose of empowering and facilitating connections between “trans and queer people, immigrants, our families, and allies for racial, gender, environmental, and economic justice.”

“The importance of Valley Femmehood can be found in our increasing support, diversity, and hopes for more inclusion and local feminism of color in the San Fernando Valley,” Somos Familia Valle board member Ronnie Veliz tells INTO. “It is wonderful and tangible when you have a space to become familiar with folks looking to be themselves and embrace femme power from all walks of life. We see it in the resilience of our members.”

Somos Familia Valle’s main incentive is to make the San Fernando Valley — particularly the predominantly Latinx suburbs — a safer and more unified place for LGBTQ+ folk by educating the community about the often hostile realities of being Latinx and queer, in hopes that by creating a common space for all, neighbors can be transformed into allies.

Currently, Somos Familia Valle offers five different programs: Youth Council, Family Acceptance, Valley Femmehood, Men of Color, The People vs. ICE, and Vogue Sessions for youth between the ages of 14 and 24. All programs aim to educate LGBTQ+ folk and allies alike on the issues confronted by the community, with the purpose of providing a healthier, more positive experience within the San Fernando Valley’s Latinx working-class population. 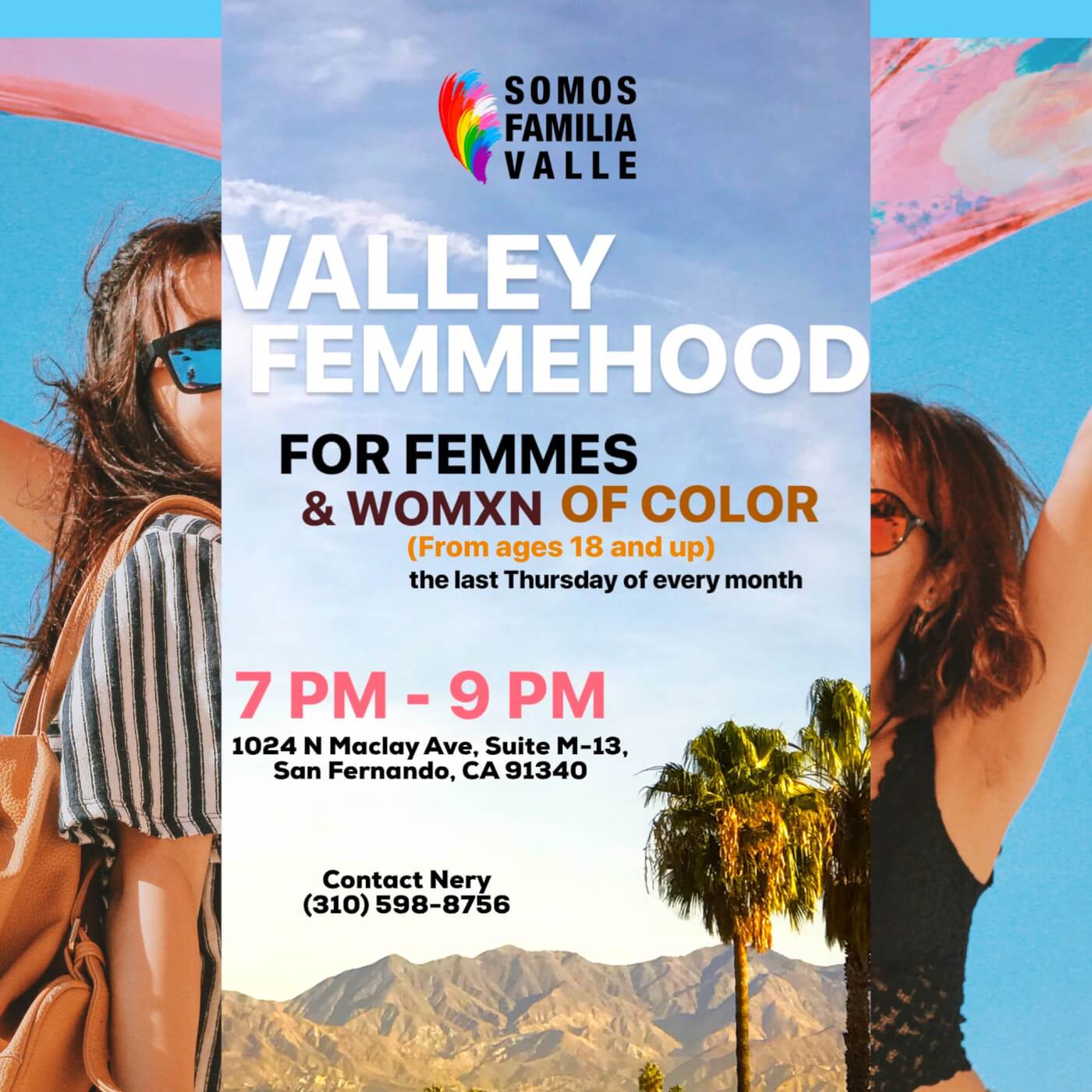 It’s clear that those of us who are Latinx and queer, who know some of the hurdles, need to take responsibility and support these organizations that are doing the work of unifying the community. As for Valley Femmehood, it is a space I personally hadn’t realized was desperately needed until I was sitting in it, a sentiment I’m sure is shared by the other cis folk in the room.

“We see [resilience] in the trans woman of color from Guatemala who is a recent arrival working in the food industry, in the bisexual Mexican American first-generation college student who is breaking barriers, in the young straight Filipina woman who is facing her immediate family’s conservative, Trump-supportive, and anti-LGBTQ views, and the lesbian Armenian sister who is more deeply exploring her own coming out possibilities and diaspora experiences,” Veliz says. “We are here for them. They are our year-round Pride. They are our Valley Femmehood.”

To find out more about Somos Familia Valle and the programs they offer, or to make a donation, please visit the official site.